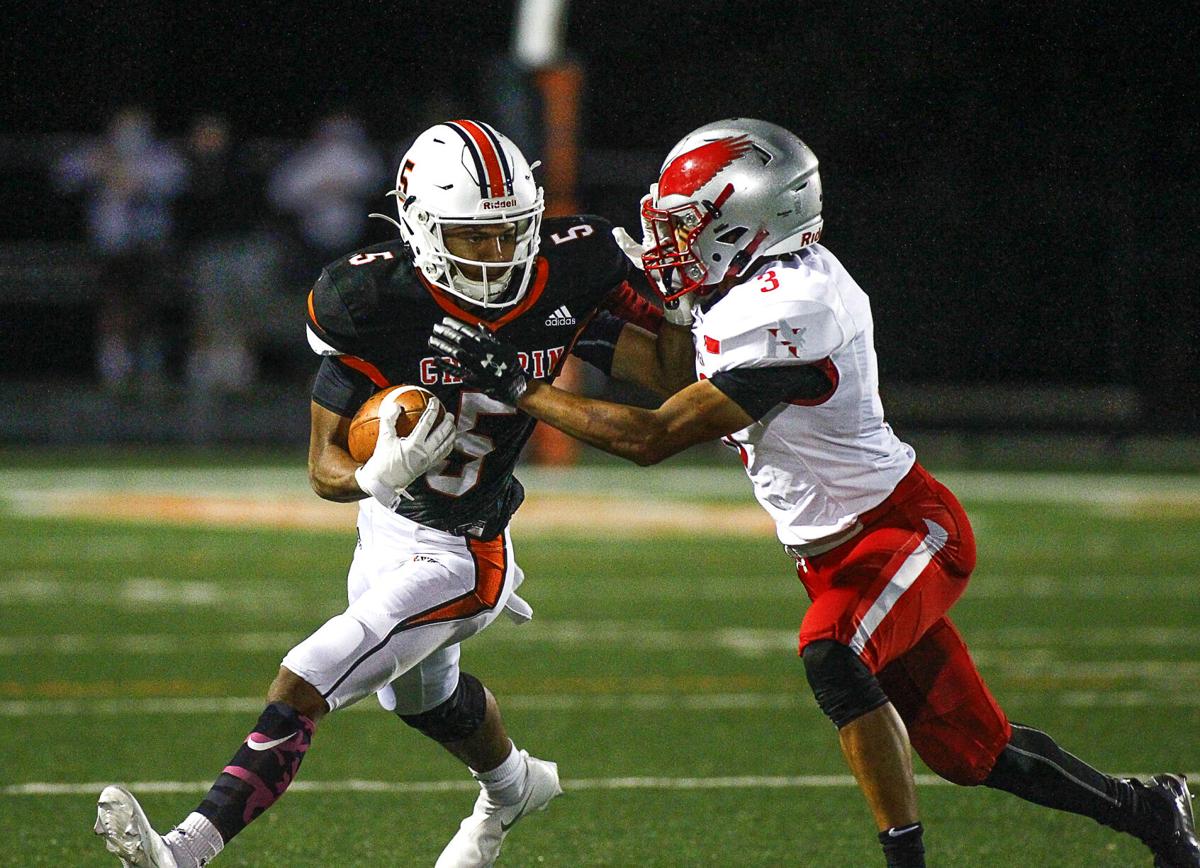 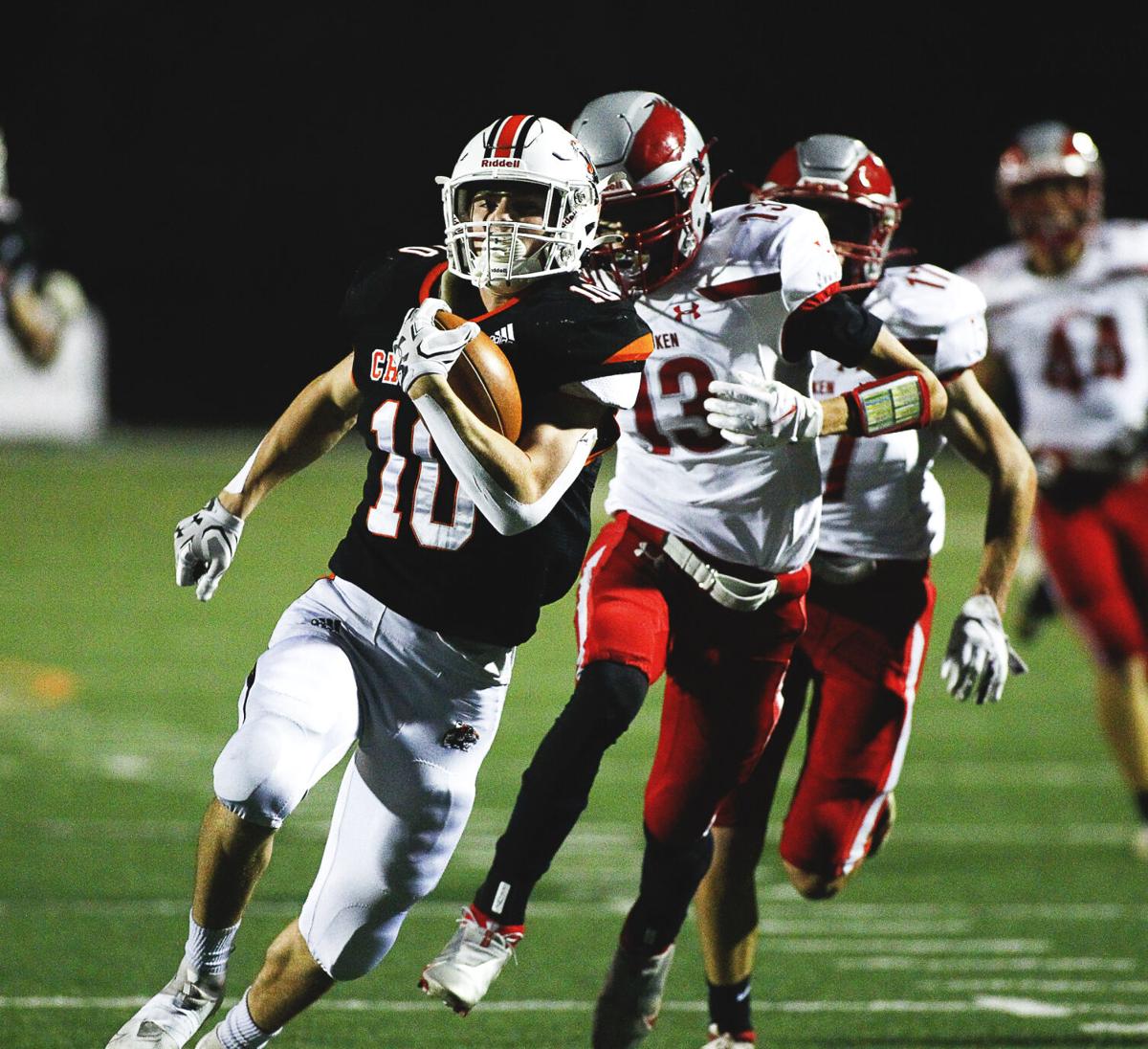 Chagrin Falls sophomore running back Donny Hardy is off to the races on one of his two touchdowns against Hawken School on Saturday night. 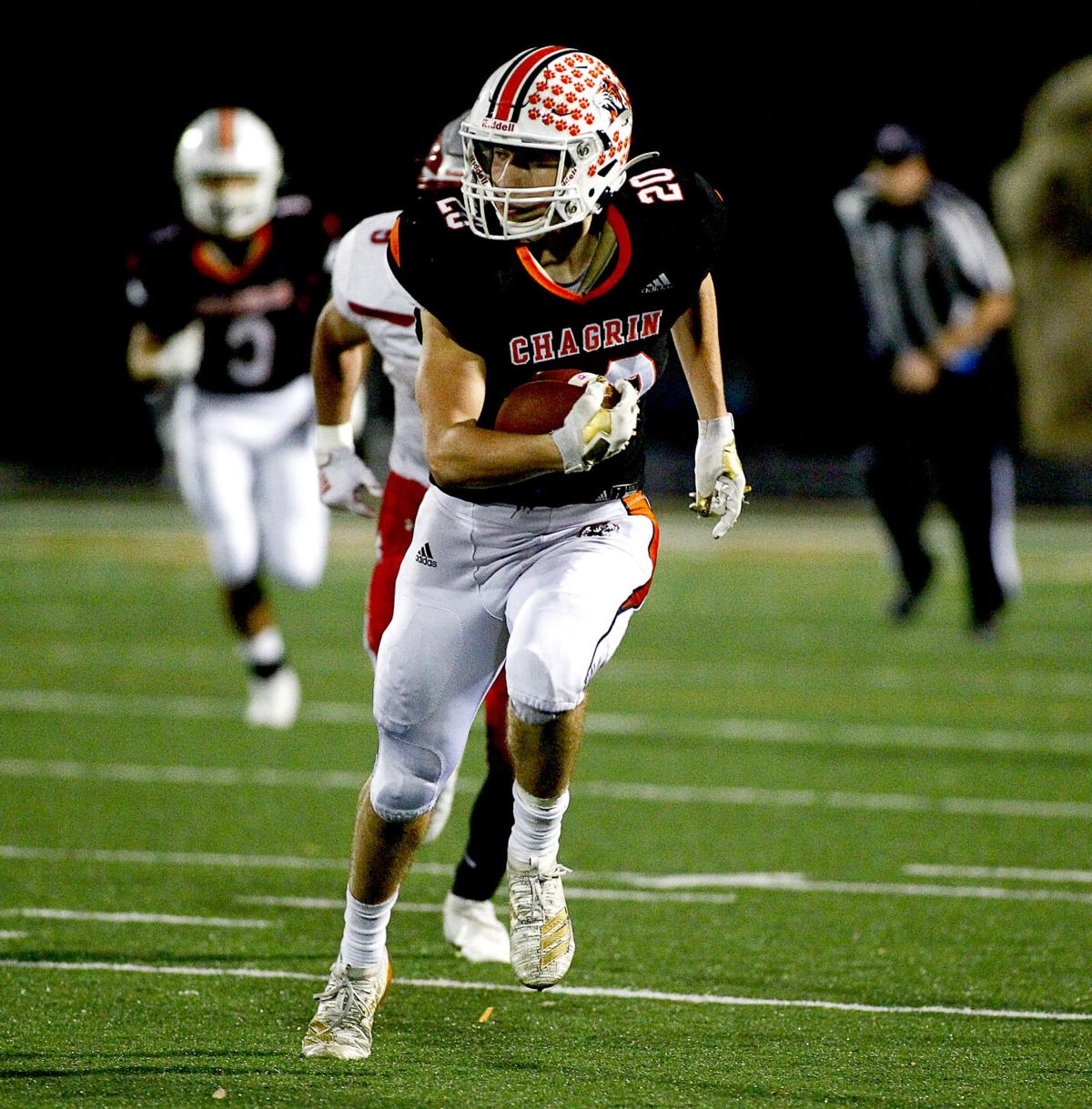 Chagrin Falls sophomore running back Donny Hardy is off to the races on one of his two touchdowns against Hawken School on Saturday night.

The Chagrin Falls gridders (5-2) capitalized on a pair of turnovers to take a 14-0 lead at the quarter mark of a Division IV, Region 13 playoff opener against Hawken School (0-3) on Saturday night at C.S. Harris Stadium.

But when the visiting No. 23-seed Hawks came back and scored on a 14-yard toss from junior quarterback Terrence Robinson to junior tight end AJ Sands to open the second quarter, cutting Chagrin’s lead, 14-6, it might have seemed all too familiar for the No. 10-seed Tigers.

The previous week, Chagrin Falls capitalized on special teams and defense to take a two-touchdown lead against West Geauga at the quarter mark, before the Wolverines scored in the second quarter to mount a comeback, 30-22.

But Hawken School was no West Geauga, as Chagrin Falls didn’t let history from the previous week repeat itself. Instead, the Tigers scored four straight touchdowns to end the first half en route to a 56-6 victory.

“I mean, we rushed the ball 25 times for 518 yards,” Chagrin 26th-year head coach Mark Iammarino said. “And I think we had four rushers over 100 yards. So, that was the bottom line. We were able to run the ball and got up on a big lead and got to play everybody in the second half. So, that was good.”

Those numbers came in the first half and the first drive of the second half.

“We have three tailbacks, and when in the second half we felt like it was time to get some other guys in, we really didn’t have a tailback to put in,” Iammarino said. “So, we took our JV fullback, Camden Amata, and put him at tailback, and he broke a 96-yard touchdown run in the fourth quarter. So, that was pretty exciting.”

A 160-pound junior, Amata finished with three carries for 105 yards to eclipse the century mark.

“He’s a great practice player,” Iammarino said. “He plays on our scout team, backs up at running back, backs up at linebacker. He plays on special teams. So, to see a guy like that have some fun, have some success, it was exciting for all of the kids.”

Hawken fumbled on its ensuing series, with Chagrin senior defensive back Will Tropp forcing it and junior defensive back Cole Ettinger recovering it. On the next play, Hardy broke loose on a 53-yard touchdown for a 14-0 Tiger lead with 7:25 to go in the frame.

But then came that Hawken end-zone find from Robinson to Shorts to close the gap, 14-6, on the first play of the second quarter. Robinson would finish 17-of-27 passing for 164 yards.

“I was very impressed with their quarterback,” Iammarino said. “He throws the ball very well, a big kid. They have a nice offensive scheme that their routes put some pressure on your defense, but I think what happened eventually is we just got a lot of pressure on them. I think we sacked them six or seven times and pressured them, and that disrupts the whole process.

“So, if he was able to stand back there and throw the ball, like I said, they have a nice passing attack, and it’s no mystery of why they moved the ball well on their previous opponents.”

After racking up 400-plus yards in their two previous games, the Hawks were limited to 251 yards with 13 first downs against Chagrin Falls.

In addition to Norton’s pick, Chagrin junior defensive back Ryan O’Neil also collected an interception against the Hawks’ aerial attack, while 210-pound junior lineman Max Moore led the Tigers with three tackles for loss and a sack.

“I just think we were able to get really good pressure with a combination of our defensive line and then some blitzes,” Iammarino said. “And that really disrupted their pass offense. Then, once again, Andrew (Kirkpatrick) had about nine kickoffs, and six of them were in the end zone. So, each time they’re starting first-and-80, that really sets up your defense well.”

Perez then found pay dirt for a 30-yard touchdown run on the Tigers’ opening drive of the third quarter to take a 49-6 lead with 10:03 to go in the frame.

Amata polished off the scoring with that 96-yard touchdown run with 5:29 remaining in the game for the 56-6 final.

In addition to all of Chagrin’s century-mark rushers, 180-pound sophomore Charlie Frederick had five carries for 65 yards.

“I’m happy for the seniors in that they all got to play and have a nice playoff win at home,” Iammarino said. “I was really happy for the seniors. It’s been a really strong group for us. And after a disappointing loss the week before, everybody came back to practice on Monday with renewed energy and a plan, and so I was very happy for them to get that positive reinforcement that your hard work in practice will pay off on game day.”

Up next, Chagrin Falls will hit the road to take on region No. 7-seed Mogadore Field (4-2) at 7 p.m. Saturday at Falcons Field in Portage County.