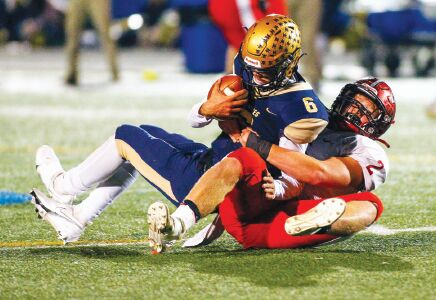 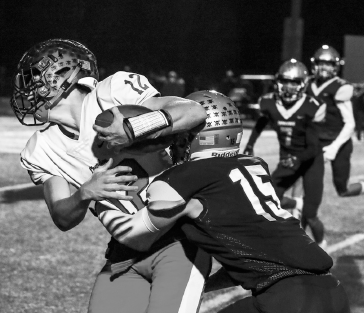 Chardon 6-foot-1 senior quarterback Drew Fetchik (left) appears to be stopped by Columbian junior defensive back Gunther Kissell, before muscling the final 5 yards of his 19-yard touchdown run to put the Hilltoppers up, 40-7. 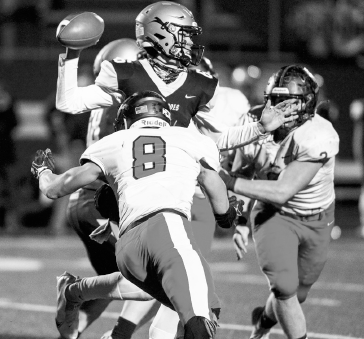 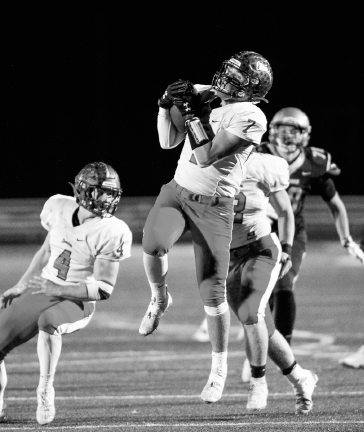 Chardon 6-foot-1 senior quarterback Drew Fetchik (left) appears to be stopped by Columbian junior defensive back Gunther Kissell, before muscling the final 5 yards of his 19-yard touchdown run to put the Hilltoppers up, 40-7.

It must have been the tornadiclike conditions on the gridiron that had Chardon football (11-0) losing a grip on the pigskin during its Division III state semifinal against Tiffin Columbian (9-2) on Friday night in Brunswick.

Or perhaps it was the rumbling crowd of 900 Columbian faithful on the home side of the neutral stadium, while the Hilltoppers, who’ve been ranked No. 1 in the state AP poll all season, were snubbed by the Ohio High School Athletic Association with only 400 tickets for their supporters because of the less-spacious stands on the visitors’ side.

Whatever the case, the Chardon boys lost a fumble and an interception in the first quarter against the non-ranked Tornadoes. Through their first four playoff games, turnovers had been a non-issue for the Hilltoppers.

So, one would assume Chardon might be in some early trouble with it being a state semifinal game and all. But, unlike the Columbian Tornadoes, the Hilltoppers remained calm and collected.

After all, Chardon’s defense hasn’t surrendered a first-quarter touchdown all season. So, both times the Toppers got bit with the turnover bug in that opening stanza against Columbian, they answered by forcing the Tornadoes into turnovers.

Not to mention, Hilltopper 170-pound senior running back James Pettyjohn – who had a night to remember with 234 yards rushing on 16 carries for four touchdowns – already opened the floodgates on a 69-yard touchdown run on the third play of the game to ignite what ended up being a 21-0 Chardon command by the quarter mark.

“We’ve been fortunate to do that all year long, and that’s a testament to our preparation,” Chardon 10th-year head coach Mitch Hewitt said of a three-touchdown lead, despite the early turnovers.

Chardon continued to take the twist out of the Tornadoes all night, as the Hilltopper ball carriers funneled right through hole, after hole, after hole, for 455 yards rushing en route to a pulverizing 47-7 victory.

The average margin of victory across the other 13 state semifinal games was a mere 8.2 points, with only Division V Kirtland, which defeated Otsego, 39-13, joining Chardon as a blowout outlier.

While the Hilltoppers only had 400 tickets to the state semifinal game, they had a whole community supporting them back home in Geauga County.

“Going uptown, I didn’t know if there was going to be six or seven people up there; I had no idea what to expect,” Hewitt told his gridders in the postgame huddle. “It’s probably because I’m getting old, but I was crying – don’t tell anyone this.”

His kneeling Hilltoppers let out a little chuckle.

“But I was crying, fellas,” Hewitt said. “Let me tell you why, though. It wasn’t because our record or necessarily the team at that point. It was like, for two minutes, nobody cared what political side we’re on. No one cared what COVID stance you took. It was like unity. I saw little kids out there being what little kids should be, smiling and celebrating and being a community.

Behind the blowout victory, Chardon football will be dancing to the state championship game for just the third time in program history – joining the 1994 and 1998 Hilltoppers – with a title collision against Columbus St. Francis DeSales (9-1) at 6:15 p.m. Saturday at Fortress Obetz, just south of Columbus.

“I read pass, I think I saw the quarterback running in, and one of our guys got to it and stripped it out,” Slife said. “I saw the ball right in front of me. I just picked it up and tried to run toward the end zone.”

Three plays later, Pettyjohn broke free on a 35-yard touchdown for a 14-0 lead with 7:05 remaining in the first.

“After we saw (Pettyjohn) rip off that first big one, it always gets our defense real excited,” Slife said. “We’re always ready to go out and terrorize, but when we see the offense chugging along, putting it in the end zone, it’s even more determination for us.”

Chardon’s next defensive series featured a sack by 200-pound senior lineman Evan Gardner to force the Tornadoes into a fourthand- 13 punt from their own 5-yard line, which was shanked and took a bad bounce to gift-wrap the Hilltoppers’ offense a 21-yard field.

Three plays later, 6-foot-1 senior quarterback Drew Fetchik followed the blocking of 185-pound senior running back Evan Ash to the outside and found the end zone on a 13-yard keeper for that 21-0 command with 4:45 to go in the first stanza.

Then, after Chardon’s defense forced another three-and-out punt, two more turnovers ensued, first with a fumbled snap by the Hilltoppers at midfield.

But Columbian was going nowhere, as 205-pound senior linebacker Blake Barker broke through the Tornado line to chase down freshman quarterback Brayden Roggow, who tried to get off a pass. Barker ended up getting a piece of it, to pop the pigskin straight up, and McDevitt was there for the interception to provide the Hilltoppers a 17-yard field at the quarter mark.

Overall, there were a combined five turnovers on 10 possessions in the opening stanza. And going against Columbian’s no-huddle offense, Chardon’s two platoons paid off.

“Having one-way players is everything,” Chardon 195-pound senior linebacker Vince Ferrante said. “If you have fresh guys on the field, they’re going to go 100 percent every single play, and it’s just going to be a dominant football game.”

After that McDevitt pop-up interception, Chardon junior Nathan Tager split the uprights on a 33-yard field goal for a 24-0 lead with 11:11 to go in the half.

The Hilltoppers’ kickoff coverage team then pinned Columbian back at its 4-yard line. Two plays later, Chardon 205-pound junior linebacker Christian Hall put the chase on Roggow in the end zone, forcing him into intentional grounding for a safety and a 26-0 Chardon lead with 10:34 to go in the half.

The game finally settled down on Chardon’s ensuing series – a 16-play, 84-yard drive that chewed up nearly eight minutes of clock and resulted in a 4-yard touchdown by Pettyjohn for a 33-0 lead with 2:46 remaining in the half.

Chardon got the ball back with 2:17 to go, but another fumbled snap provided Columbian a 58-yard field. The Tornadoes finally got on the board with a 15-yard touchdown toss to cut their deficit, 33-7, just before the half.

Chardon’s defense turned Columbian over on downs during both of its possessions in the third quarter.

Chardon’s offense capitalized both times, first with 190-pound junior fullback Sean Carr converting a fourth-and-three carry, when he was met at the first-down marker, before gaining an additional 10 yards on a pile-pusher. Fetchik made good on that effort by following up with a 19-yard touchdown run, bulldozing a Tornado defensive back at the 5-yard line and muscling his way into the end zone to enact a running clock, 40-7, with 6:49 to go in the third.

Then Pettyjohn came through on his fourth touchdown of the night, this time breaking loose on a sweep down the right sideline for a 68-yard score and a 47-7 lead with 1:41 to go in the third.

“James is a talented kid,” Hewitt said. “He can be a player-of-the-year type player, certainly in our Northeast Ohio. He’s a special kid, and he’s an easy-to-root-for kid. So, that makes it all the easier to see him have success.”

That was all the football gods wrote, as Chardon outgained Columbian, 462 yards to 158 yards, in the victory.

Also standing out defensively for the Hilltoppers, in addition to the three turnovers and safety, 210-pound senior end Myles Mendeszoon had two sacks, one bat down and a tackle for loss to keep pressure on Columbian’s two quarterbacks all night.

The Tornadoes netted just 1 yard on the ground, with a fumble and four sacks figuring into that equation.

Chardon is just one of six unbeatens remaining in Ohio.