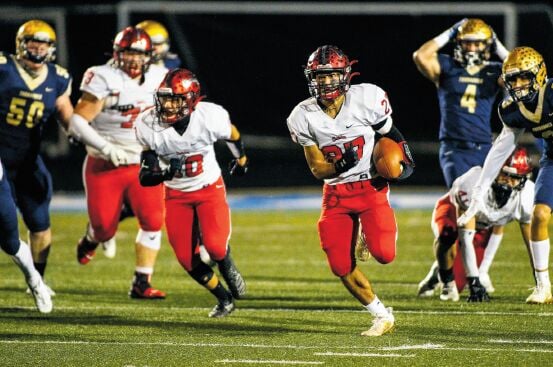 Chardon 170-pound senior running back James Pettyjohn breaks free for a 69-yard touchdown run at the dismay of Columbian junior linebacker Seth Belville (No. 4) during the third play of the Hilltoppers’ 47-7 Division III state semifinal victory on Friday night in Brunswick. Pettyjohn finished with 16 carries for 234 yards and four touchdowns. 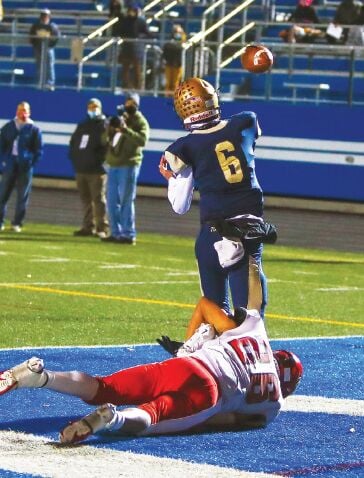 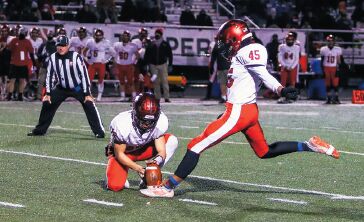 Chardon 6-foot-1 junior kicker Nathan Tager connects on a 33-yard field goal to put the Hilltoppers up, 24-0, early in the second quarter against Columbian.

Chardon 170-pound senior running back James Pettyjohn breaks free for a 69-yard touchdown run at the dismay of Columbian junior linebacker Seth Belville (No. 4) during the third play of the Hilltoppers’ 47-7 Division III state semifinal victory on Friday night in Brunswick. Pettyjohn finished with 16 carries for 234 yards and four touchdowns.

Chardon 6-foot-1 junior kicker Nathan Tager connects on a 33-yard field goal to put the Hilltoppers up, 24-0, early in the second quarter against Columbian.

There’s only one thing left for Chardon football (11-0) to do – win the whole darn thing.

The Division III AP No. 1-ranked Hilltoppers will chase their program’s second state title when they collide with the AP No. 8-ranked Columbus St. Francis DeSales Stallions (9-1) in the championship game at 6:15 p.m. Saturday at Fortress Obetz, just south of Columbus.

In Chardon’s previous two trips to a state championship, the 1994 Hilltoppers defeated Rayland Buckeye Local, 17-6, during a 14-0 campaign under former coach Bob Doyle, and the 1998 Hilltoppers lost a 27-21 battle against Lebanon during a 13-1 campaign under Doyle – both games were played at Paul Brown Tiger Stadium in Massillon.

While the 2020 Hilltoppers have been ranked No. 1 all season and are no doubt the favorites to win the state championship behind the dominant victories they’ve registered entering Saturday’s season finale, 10th-year head coach Mitch Hewitt said keeping his gridders humble and motivated hasn’t been a concern.

“It’s the type of character they are,” Hewitt said of his players. “Monday through Thursday, they get horsewhipped. No one there walks around thinking they’re anything special. Every week you’ve got to bring it or you’re going to lose.

“And this week is going to be no different. We’re going to see our toughest opponent yet, and we’ve got to get better. We think we can still get better. So, I’m encouraged by that.”

Chardon is coming off a 47-7 state semifinal victory against Tiffin Columbian (9-2) in an outing that 170-pound senior running back James Pettyjohn had 16 carries for 234 yards with four touchdowns to spearhead an offense that pounded the pigskin for 455 yards rushing.

While ball security hasn’t been an issue pretty much all season, the Hilltoppers did cough up an interception and two fumbled snaps last week, but only one of those resulted in a touchdown drive for their opponents.

The Hilltoppers scored 10 points off those turnovers.

Six-foot-5 senior safety Brady Toth cleaned up the tackling efforts against a Tornado offense that had two quarterbacks combining on 15-of-43 passing for 157 of their 158 yards. Meanwhile, 6-foot-2 sophomore defensive back Alex Henry stepped in and did a nice job in the absence of 6-foot-4 junior safety Nathanael Sulka, who collected two turnovers the previous week, before exiting with a shoulder injury.

“Our defense has been rock-solid all year,” Hewitt said. “We’re really, really hard to score on, and we did it this week without Nathanael Sulka. And Alex Henry stepped in, and, as a sophomore, played his rear-end off.”

St. Francis DeSales, meanwhile, is a threetime state champion, in 1985, 1997 and 1998, and is set to make its ninth state-title-game appearance, first since 2009, against Chardon. The Stallions are under 14th-year head coach Ryan Wiggins, who owns a 120-44 record at the helm.

In their state semifinal last week, the DeSales Stallions put together a 23-13 victory against AP No. 10-ranked Kettering Archbishop Alter (8-3), which was without head coach Ed Domsitz, who was quarantined after testing positive for COVID-19.

DeSales owned a 9-7 lead at halftime of that game, thanks to a 41-yard field goal by JJ Baughman with 16 seconds to go in the second quarter.

But DeSales 6-foot, 190-pound senior running back Quintell Quinn, an Ohio University recruit who rushed for 135 yards and three touchdowns on 24 carries, broke the game open in the second half.

In doing so, Quinn became the DeSales football program’s all-time leading rusher with more than 3,350 yards in his career. He was a first-team all-Ohioan in 2019.

In addition, DeSales 6-foot-3, 205-pound junior quarterback Whit Hobgood had six carries for 69 yards and completed two of six passes for 44 yards in the win against Alter.

Defensively, DeSales did enough to contain Alter 6-foot-1, 215-pound all-Ohio running back Branden McDonald to a pair of touchdowns, from 1 and 10 yards out. DeSales is surrendering just 17.2 points per game this season.

That said, fans can expect nothing less than some smash-mouth football in the trenches when Chardon and DeSales collide in the title game.

Chardon and DeSales will be meeting for the first time on the gridiron.