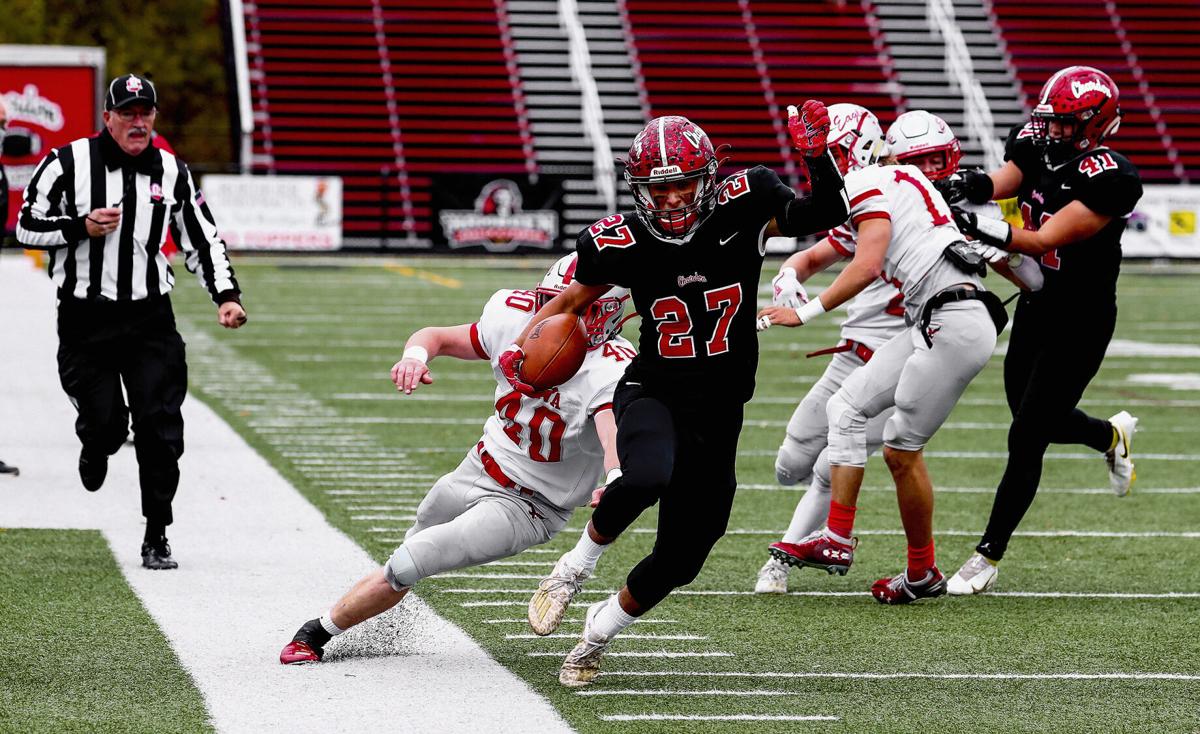 Chardon senior James Pettyjohn tip-toes the sideline during his 147-yard rushing performance in the Hilltoppers’ 57-13 home playoff win against Geneva on Saturday afternoon at Memorial Field. 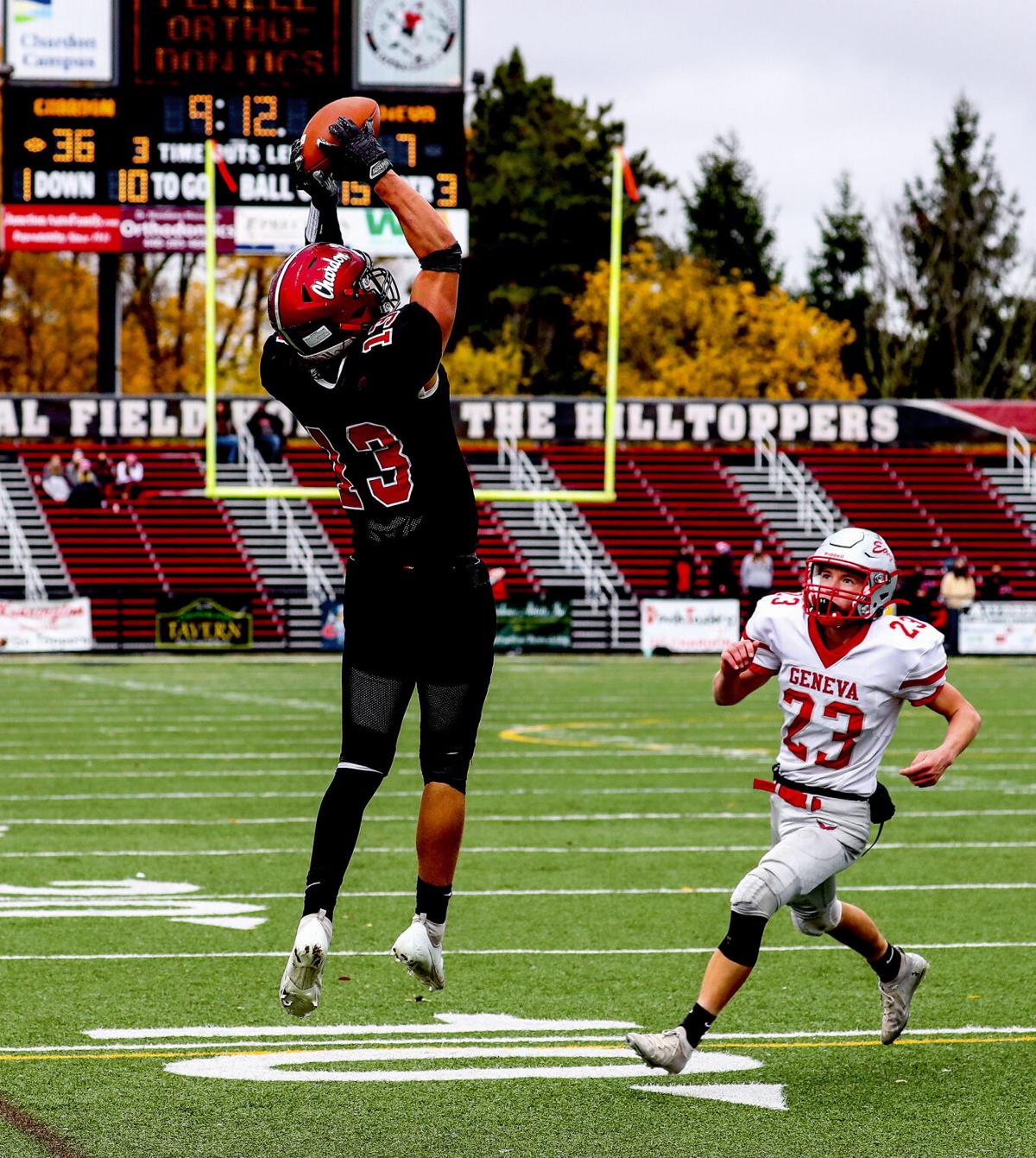 Chardon 6-foot-4 junior Nathanael Sulka grabs a reception that he turned into a 13-yard touchdown during the Hilltoppers’ 57-13 win against Geneva.

Chardon senior James Pettyjohn tip-toes the sideline during his 147-yard rushing performance in the Hilltoppers’ 57-13 home playoff win against Geneva on Saturday afternoon at Memorial Field.

Chardon 6-foot-4 junior Nathanael Sulka grabs a reception that he turned into a 13-yard touchdown during the Hilltoppers’ 57-13 win against Geneva.

The Division III AP No. 1-ranked Chardon gridders (8-0) weren’t expecting any handouts on Friday night – or Saturday afternoon, for that matter.

Geneva 18-wheeler Charlie Taylor and company were coming to town, and the 6-foot-3, 250-pound fullback wasn’t rolling in with any flat tires after leading his Eagles to a 7-1 campaign entering the Division III, Region 9 quarterfinal collision at Memorial Field.

After storms delayed, and then ultimately postponed, the kickoff from Friday night to Saturday afternoon, the region-favorite Hilltoppers had no problem putting the brakes on Taylor, a 1,000-yard rusher this campaign, and the rest of the No. 8-seed Eagles.

The outcome was well wrapped up before then, as Chardon cashed in on a 57-13 paycheck to clock out Geneva and advance to the regional semifinals.

“Our biggest deal is our preparation,” Chardon 10th-year head coach Mitch Hewitt said about holding Geneva’s wing-T to 108 yards rushing for the game.

“I mean, ultimately, Friday night has to be a byproduct of the preparation of the workweek,” he said. “It’s almost like what we consider payday. If you don’t work at all during the week, then don’t expect to get paid. And our kids are continually reminded of that; a Friday night performance is a direct result of preparation. So, we’ve got big, strong kids that run and hit, and we’re healthy for this point of the season. So, yeah, we just executed.”

The execution came in the form of a 21-0 lead at the quarter mark and then a 36-0 upper hand midway through the second frame, before the Eagles knew what hit them.

The Hilltoppers’ defense then had Geneva pinned at fourth-and-long from its own 17-yard line and the big-man himself, Taylor, punting away a line drive that bounced off the turf and into the hands of Chardon returner McDevitt, who followed the blocking efforts of 200-pound sophomore Cooper Felger and 185-pound senior Elliott Tyminski to find room down the sideline for a 47-yard touchdown and a 14-0 lead with 6:49 to go in the stanza.

“It’s a lot easier when the ball is a line drive or bouncing, because I can see everything in front of me,” McDevitt said. “So, I knew I had to catch the ball and react to it – obviously take it to the sideline and have my guys block.”

In most years, McDevitt would be a two-way starter, but, because of the depth and experience of the 2020 Hilltoppers, the standout gridder sticks to his linebacker and special-teams responsibilities, Hewitt said.

Would McDevitt like to get some carries out of the offensive backfield? Sure, he said.

“But we only do one-way guys, so the best thing for the team is for me to play defense,” McDevitt said. “But when I get a chance to go get the ball on a punt return or kick return, it’s a lot of fun.”

Pettyjohn, who finished with 147 yards rushing, then had a 24-yard rush down to the 1-yard line, before Fetchik finished off a sneak for a 36-0 command with 3:22 to go in the half.

All the while, Geneva’s wing-T proved inferior with the Eagles’ ground attack having yet to establish any sort of sustainable drive.

“The intensity they came out with wasn’t very strong,” Chardon’s Mendeszoon said. “We came out really intense and hyped up, and they just sounded kind of mute when they came out. So, we kind of already knew we mentally won.

“Everybody just did their assignments, and we just played the way our coaches taught us to, and it just worked out. We prepared all week to do our assignments and nothing else.”

With their hands tied behind their backs, the Eagles aborted their wing-T and gave 6-foot-5, 215-pound senior quarterback Ben Scibona the green light for an aerial attack that resulted in a 5-yard touchdown completion to 6-foot-1 junior Wyatt Fuduric to cut the deficit, 36-7, with six seconds to go in the half.

Scibona finished nine-of-15 passing for 84 yards, but that touchdown only delayed the inevitable – a running clock for Chardon in the second half.

“It wasn’t anything we needed to change – it was mostly just blown coverages and people getting too confident thinking it was going to be a run every time,” Mendeszoon said. “Our coaches had everyone sit down and just said, ‘Hey, you’ve got to start doing what you were coached to do and not your own thing.’”

Chardon buckled back up in the second half to score the next three touchdowns.

Chardon 185-pound senior Charlie Brosch then scored on a 9-yard carry for a 57-7 lead with 4:35 to play, before Geneva’s Taylor finally found daylight on that previously mentioned 53-yard jaunt for the 57-13 final.

“One of the things we’ve done that I’m probably most impressed is that back-to-back weeks we’ve had seven different kids score a touchdown,” coach Hewitt said. “That’s a remarkable stat, back-to-back weeks, in playoff games. So, we’re a deep team. We’ve got a lot of kids who we think, when they get the ball in their hands, they can score, and I think that’s been proven over the past few weeks.”