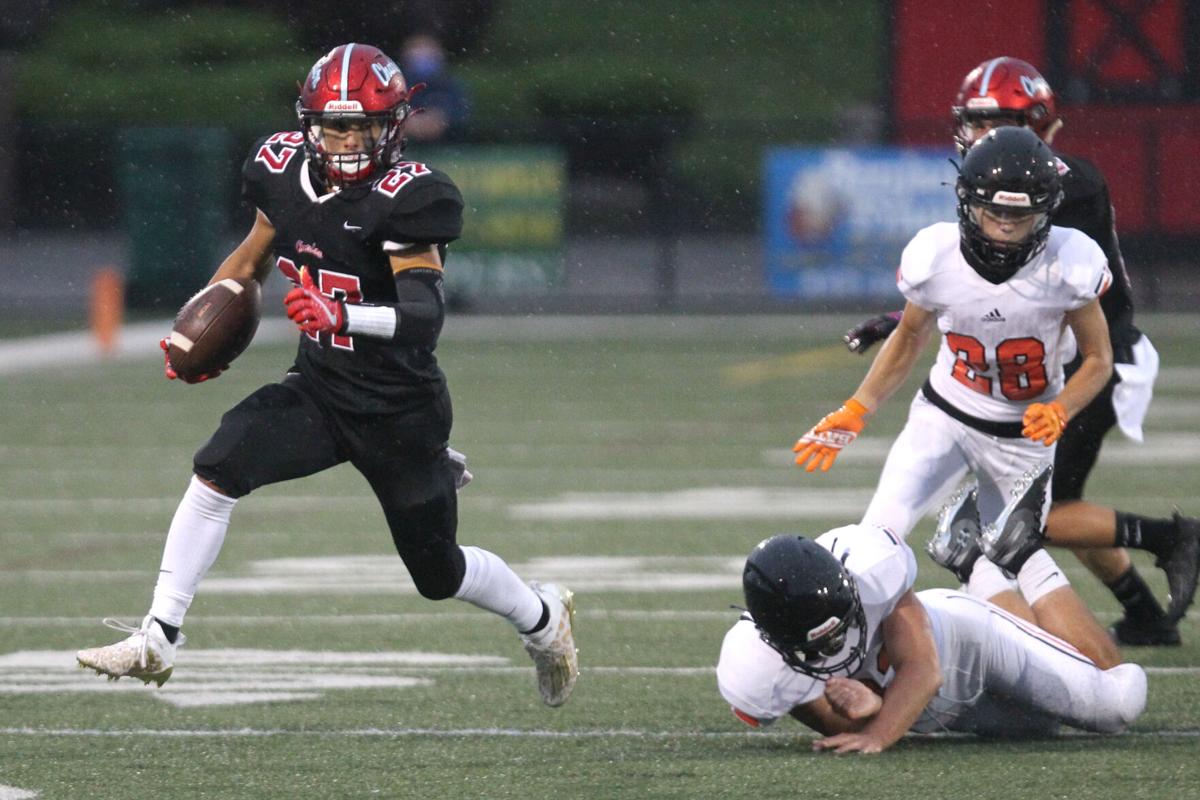 Chardon 170-pound senior running back James Pettyjohn fends off a would-be Eastlake North tackler and heads toward the end zone for a 43-yard touchdown run in the Hilltoppers’ week-one home victory, 42-7, on Friday night at Memorial Field. 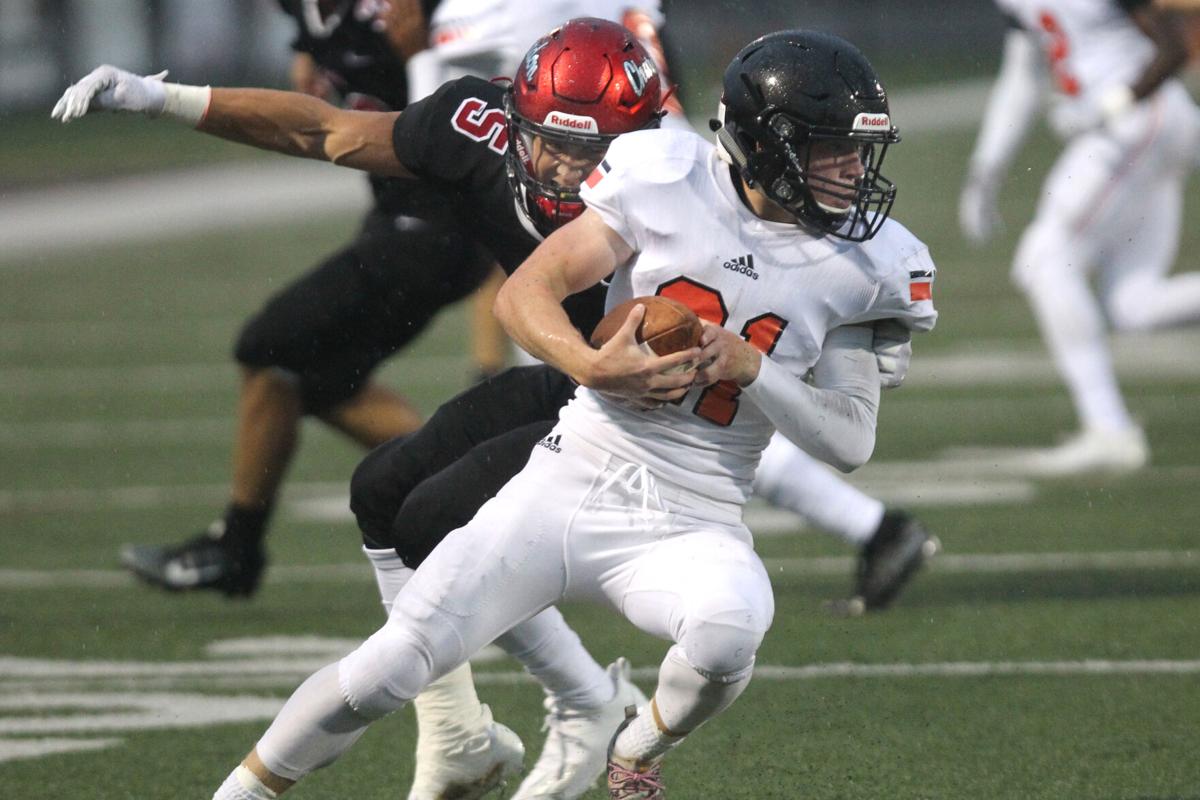 Vince Ferrante of Chardon (5) moves in to tackle Chris Molica of Eastlake North in the game at Chardon High School on August 28, 2020.

Chardon 170-pound senior running back James Pettyjohn fends off a would-be Eastlake North tackler and heads toward the end zone for a 43-yard touchdown run in the Hilltoppers’ week-one home victory, 42-7, on Friday night at Memorial Field.

Vince Ferrante of Chardon (5) moves in to tackle Chris Molica of Eastlake North in the game at Chardon High School on August 28, 2020.

Chardon’s defense is tough enough to beat with good field position and favorable passing conditions. That said, Eastlake North was up a certain creek with no paddle in a season opener Friday night at the Hilltoppers’ Memorial Field.

Deploying their newest weapon, 6-foot-1 junior kicker Nathan Tager, the Chardon boys tilted the gridiron in their favor all game, meaning the visiting Division II Rangers were going to have to move the chains consistently.

So, seven first downs didn’t do it for the North gridders, who were left licking their wounds after Chardon put them over the knee with a good, old butt-whooping, 42-7.

“Our kicker is a weapon,” Chardon 10th-year head coach Mitch Hewitt said of Tager. “And this is a kid who didn’t even play football last year. I’ve been begging him for years to play or kick for us. He probably thought I was a little weird, a football coach coming up to him, but man, oh man, he’s a weapon. He can be an elite kicker. He was six of six for extra points, and his kickoffs were touchbacks. I mean, he’s really, really good.”

Behind 170-pound senior running back James Pettyjohn, who rushed for 179 yards with two touchdowns, including a 43-yard jaunt for the Hilltoppers’ first end-zone find of the season, Chardon secured its third-straight victory against Western Reserve Conference foe North.

But the past two years, Chardon played North in week 10, when the Rangers were already mathematically eliminated from the possibility of a playoff berth.

“We were super excited just to get back out, and what we told our kids pregame was that the last six months of their lives had been flipped upside-down, and, for the next 48 minutes, it’s going to be normal,” Hewitt said. “And it really was, other than some sideline stuff and spacing, it was probably the most normal 48 minutes those kids have had in a while.”

After Pettyjohn lit the board, Chardon 190-pound junior fullback Sean Carr scored a 2-yard touchdown run for a 14-0 upper hand with 1:29 remaining in the first quarter.

That lead remained at intermission, before the Hilltoppers’ conditioning and preparation showed up in the second half, Hewitt said.

Carr found pay dirt again, this time on a 10-yard touchdown carry, to put the Hilltoppers up, 21-0, with 6:44 to go in the third quarter.

Less than a minute later, North senior quarterback Chris Molica, the fastest guy on his team, scored the Rangers’ lone touchdown on a 78-yard run, accounting for nearly half of North’s 166 yards – all coming by ground.

While North’s offense is headlined by 6-foot-7, 320-pound junior left tackle Ryan Baer, the No. 43-ranked recruit in the nation for his class and position, the Rangers’ run game was no threat against the Chardon likes of 6-foot-4, 210-pound senior defensive end Myles Mendeszoon, an Iowa State commit, and 195-pound senior linebackers Vince Ferrante and Cade McDevitt.

After North’s lone score, Chardon 6-foot-4 junior Nathanael Sulka, who just picked up an offer from Iowa State as a defensive back, was inserted to the Hilltoppers’ offense and scored a 5-yard touchdown run out of the wildcat for a 28-7 lead before the close of the third quarter.

Pettyjohn then put the game out of reach, 35-7, on a 4-yard end-zone find with 8:55 remaining, and McDevitt polished things off with a 25-yard fumble return for a touchdown with 7:08 to play for the 42-7 final.

“It was literally just one of those hits where it popped up in the air, Cade caught it out of the air and ran it in and then turned around and was the long snapper for the extra point,” Hewitt said. “So, Cade is really a great player.”

Putting seven points on the board during the first drive of the football season is ideal for any team, but it’s especially satisfying when there’s a rookie quarterback leading an offense down the field.

West Geauga junior signal-caller Danny Stewart got busy early in the Wolverines’ road opener against Division II Lakeside on Saturday night in Ashtabula, as he connected with 175-pound senior running back Trae Zimmermann for a 35-yard touchdown completion and a 7-0 upper hand 3 1/2 minutes into action.

The host Dragons were on the verge of answering, with a second-and-goal opportunity, but West Geauga 6-foot senior safety Luke Musser intercepted Lakeside junior Garrette Siebeneck’s pass and made a dash for the opposite end zone. That would-be pick-six was negated, however, by a targeting penalty.

Musser went on to intercept Siebeneck again later in the first quarter.

“This is a kid that’s been busting his butt all year,” West Geauga third-year head coach Adam Sopkovich said. “He is the heart and soul of our defense. And the one interception he returned 99 yards, but all the calls don’t go our way all the time. I just felt bad for Luke, because he was spent and he had to get back out there because he plays both ways.”

Musser also had a fumble recover later in the game and was smart enough to bat down what could have been his third interception, but he made the correct play because it was a deep pass on fourth down, Sopkovich said.

West Geauga took a 14-0 lead when Stewart connected with 6-foot-1 junior receiver Torry Stazzone for a 10-yard touchdown pass with 8:42 to play in the second quarter.

Lakeside was primed to answer, but the Dragons missed another opportunity with a fumbled snap at the West Geauga 1-yard line.

The Ashtabula boys finally got it right on a 31-yard touchdown toss from Siebeneck to 6-foot-1 senior receiver Brandon Ford on third-and-long to cut their deficit, 14-6, with 29 seconds to go in the half.

Lakeside lost another fumble early in the fourth quarter, and West Geauga capitalized three plays later with Zimmermann punching in a 1-yard touchdown for a 21-6 Wolverine lead with 9:27 to play.

But the Dragons would come on late with a pair of touchdowns in the fourth quarter to make things interesting.

“That Buzz Edwards out there at Lakeside, they’re a different team this year,” Sopkovich said. “They are a good group of boys, very athletic, their quarterback was superb; they just played really good football.”

Edwards is in his third season at the helm at Lakeside, which lost a 45-0 affair against West Geauga during a 1-9 campaign last year.

“I knew Buzz was going to turn that thing around,” Sopkovich said. “I mean, we jumped out to an early lead on them, and those boys just never stopped playing.”

Lakeside’s Siebeneck went on to dial up junior running back AJ Raffa on a 30-yard touchdown completion, but the ensuing two-point conversion attempt came up short for a 21-12 Dragon deficit with 7:46 to play.

Then Siebeneck tossed a 34-yard touchdown pass to senior receiver Saivion Colbert to cut the deficit, 21-19, with 3:10 to play.

West Geauga’s offense went on to move the chains and run down the clock to 14 seconds, leaving Lakeside no timeouts and one play for a miracle that never came in a 21-19 final in the Wolverines’ favor.

“The game that was played in between the lines was a tough game,” Sopkovich said. “I can’t compliment Lakeside any more. They’re going to be a tough team to deal with these next couple years.”