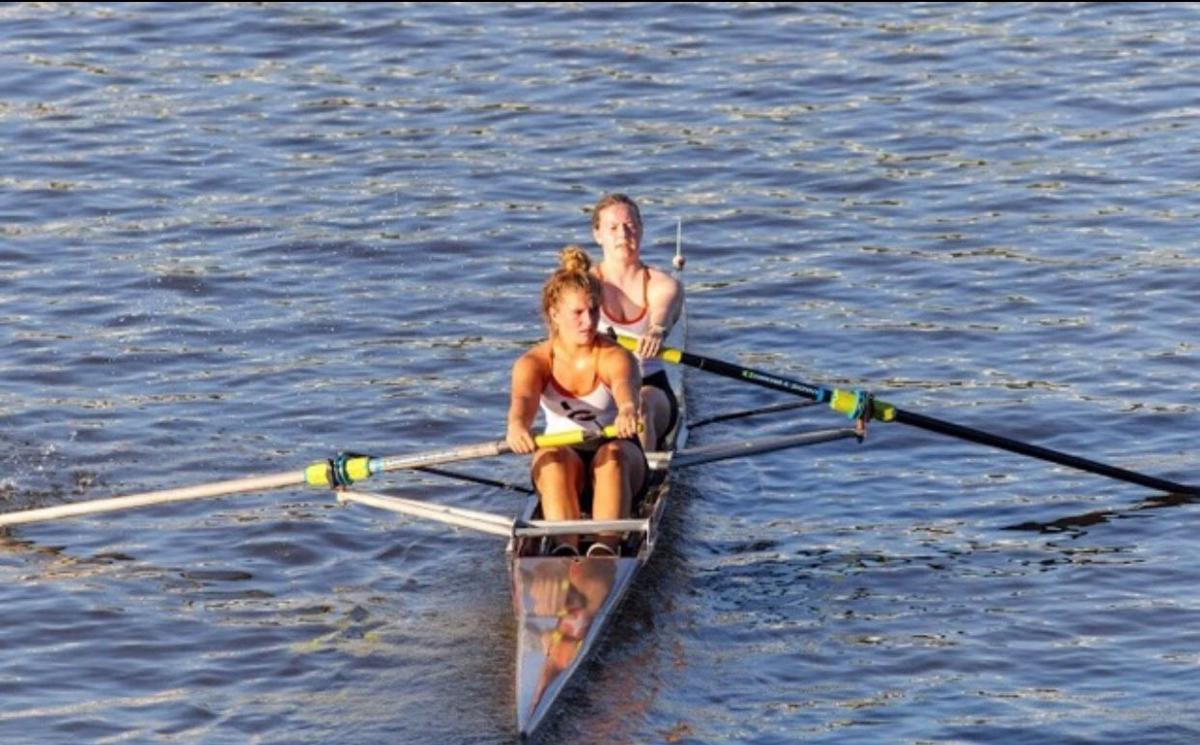 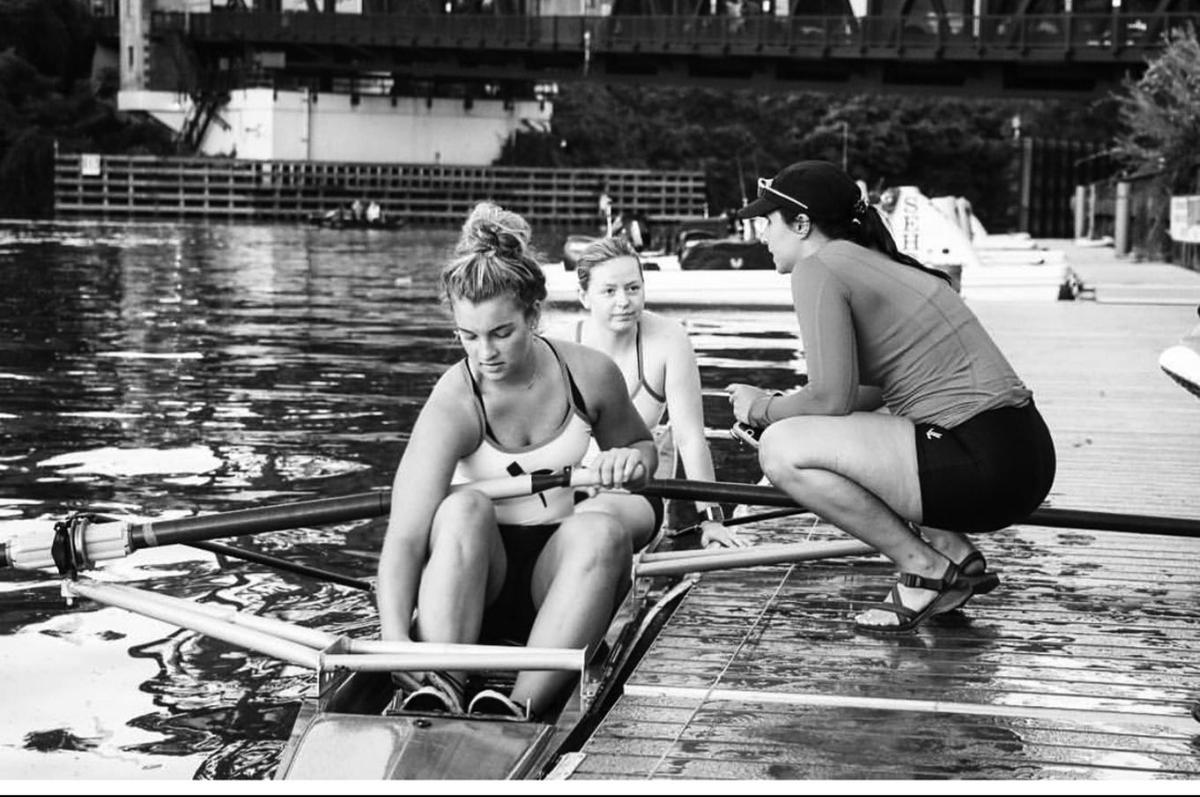 Lilly Kosar (front), of Chagrin Falls, a rower who is head coached by Alyssa Trebilcock, a 2010 Gilmour Academy graduate, at the Foundry on the east bank of the flats downtown, was one of 31 female rowers from the seven-state Midwest Region selected to U.S. Rowing’s under-17 Olympic Development Program.

Lilly Kosar (front), of Chagrin Falls, a rower who is head coached by Alyssa Trebilcock, a 2010 Gilmour Academy graduate, at the Foundry on the east bank of the flats downtown, was one of 31 female rowers from the seven-state Midwest Region selected to U.S. Rowing’s under-17 Olympic Development Program.

When Lilly Kosar entered her freshman year at Gilmour Academy in 2017, everyone knew she had the genes of an athlete.

Having a pair of older siblings who were both all-Ohioans in their respective sports as Lancers and with a family name like Kosar, there was no secret about the potential of the 5-foot-9 outside hitter.

But that didn’t mean Kosar wanted to live in the shoes of her sister, Maddie Kosar, a 2012 Gilmour graduate who was a 5-foot-8 right-side hitter for the Lady Lancers’ state runner-up volleyball team her senior year and went on to play at Washington and Lee University in Lexington, Virginia.

And it didn’t mean she wanted to be compared to her brother, Jack Kosar, a 2019 Gilmour graduate who is suiting up as a 6-foot-3, 235-pound linebacker this fall at Brown University in Providence, Rhode Island.

“It was super nice to just kind of finally show who I was, because my brother’s super successful and everyone knew him,” Lilly Kosar said. “So, it was finally nice to just show my family and everyone what I could do too.”

Taking up rowing a year ago, Kosar, now a 5-foot-10 rising junior at Gilmour, found her niche in a sport she knows is hers.

The Chagrin Falls native joined the Foundry, a competitive rowing and sailing club with direct access to the Cuyahoga River on the east bank of the Flats downtown, where she practices and trains year-round under head coach Alyssa Trebilcock, a 2010 Gilmour graduate who rowed four years at Hobart and William Smith Colleges in Geneva, New York.

“I just really loved being out on the water, and it’s just such a good team sport, because you’re really connected with all your teammates, and you just all row as one, and I just fell in love with it.”

The Cleveland Foundry Juniors is a coed rowing team with high school athletes from all over Northeast Ohio. Kosar’s partner, Mollie Edmondson, also a rising junior at Gilmour, is the only other Lady Lancer on the club team.

Despite still being a novice to the sport of rowing, Kosar is already getting experience on a national level.

Through an identification camp in February at her home boathouse at the Foundry, Kosar was one of 31 female rowers from the seven-state Midwest Region selected to U.S. Rowing’s under-17 Olympic Development Program. Audrey Roche, a rising junior at Hathaway Brown, was also selected from the Cleveland Foundry Juniors.

As part of the development program, Kosar was among the best rowers in the country in her age group who participated in three weeks of training earlier this summer in Pittsburgh and then a Summer Cup competition held July 7-14 in Sarasota, Florida.

“It was very nice to be in a new environment, in a new river, and it was just nice to row with other people I’ve never rowed with before and learn how they do things,” Kosar said. “I improved my technique so much, and I met a lot of new people that were super interesting and also just very, very good.”

Founded in 1982 as the national governing body for the sport, U.S. Rowing began the under-17 Olympic Development Program this year. It’s aimed at progressing the mindset needed for success within the Olympic system, with the nation’s top athletes from six regions receiving instruction from regional, collegiate and national team coaches, as well as getting the opportunity to represent their regions in top-level competition.

While rowing is a full-body sport, the mental strength it takes to compete at the top level is one of the most difficult aspects, Kosar said.

“Rowing just takes a lot of mental strength,” she said. “Being out on the water in many different weather conditions and rowing really, really hard is just – it takes a lot of focus.

“The biggest obstacle for me is just really keeping my energy up during races and keeping my stamina and focusing on the race at hand instead of being distracted by things outside the boat. Since rowing is pretty much a total body sport, you just feel it in everything. And a lot of times it can be your legs, your arms or just a mixture of everything.”

The Olympic Development Program is designed to further rowers’ abilities and both the physical and mental rigors of the sport.

“Matt Grau, who is the head coach at Three Rivers Rowing Association, has been involved with U.S. Rowing for a really long time,” Kosar said. “So, he’s just a really highly respected coach, and I really learned a lot from him.

“And, basically, it was a lot of rowing. It was very difficult, because it was just a super new environment, and I just tried my best to be a team player and really just listen to my coaches to become a better rower.”

After three weeks in Pittsburgh, Kosar spent one week in Sarasota – just south of Tampa on Florida’s Gulf Coast – for the inaugural under-17 ODP Summer Cup competition.

A port rower, Kosar raced in a four-boat and a pair, as well as a double, where both rowers use two oars.

“It was a lot of hard work and just difficult being out there in completely different weather conditions,” Kosar said. “We had actual races for the last two days against all the other regions. And our region did all right. We didn’t get as much time on the water because of the weather, but I think we still kept up and really did our best.

“So, it was a great experience, because it was just super, super unique to be with all these people who row from all around the United States and seeing what they do differently compared to what we do here.”

Rowers are their own brand of athletes, because their sport has certain barriers for entry, like access to waterways and boats, and, once involved, they tend to stick together, Kosar said.

After her experience with the Olympic Development Program, Kosar said she definitely wants to continue participating in future camps with U.S. Rowing and pursue the possibility of rowing in college.

“I really just enjoy seeing my improvement and progress throughout the season and everything, and just when I push through obstacles, how I feel afterward and the accomplishment that I feel within myself makes me want to keep going,” she said.

And, again, Kosar found a passion that is not on the coattail of any family members.

In addition to her two siblings who graduated from Gilmour, Kosar’s other older sister, Isabel Kosar, a 2015 Chagrin Falls graduate, was a 5-foot-10 setter for the Lady Tigers’ district championship volleyball team her senior season.

“Yeah, my family was super, super excited and super happy for me,” Lilly Kosar said of her recent rowing successes. “It was just nice to have finally found my spot and kind of just show what I can do in my sport.”