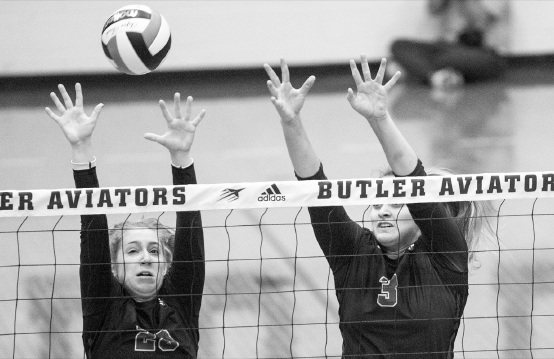 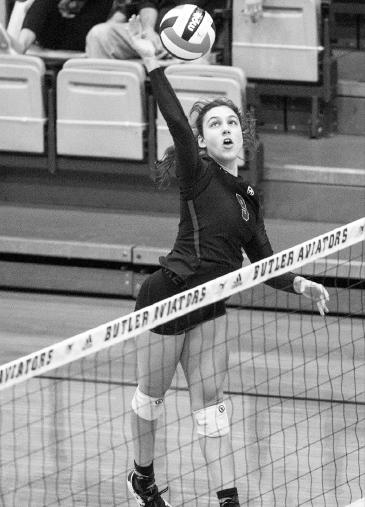 Gilmour 5-foot-11 junior outside Sabrina Gremm connects on one of her 15 kills during her state-record .700 hitting clip in the Lady Lancers’ Division II semifinal match against Tippecanoe on Friday in Vandalia.

Gilmour 5-foot-11 junior outside Sabrina Gremm connects on one of her 15 kills during her state-record .700 hitting clip in the Lady Lancers’ Division II semifinal match against Tippecanoe on Friday in Vandalia.

The Tippecanoe volleyball team showed why it had been untippable all season during the opening set against top-ranked Gilmour Academy in the Division II state semifinals on Friday at Butler High School in Vandalia, just north of Dayton.

The No. 6-ranked Lady Red Devils, according to the coaches poll, made the exhausting 15-minute road trip from Tipp City to the “neutral” site with a 27-0 record in stow, winning 25 of those matches by three-set sweeps, and went right ahead and took the opening frame against Gilmour, 25-20.

After 13 tie scores, including 17-17, Tippecanoe closed out the stanza on an 8-3 run, highlighted by three kills and a block from 6-foot senior outside hitter and first-team all-Ohioan Corinn Siefring.

The state-favorite Lady Lancers, who made the 3 1/2-hour trip from Gates Mills to Vandalia with a 21-1 record, appeared out of sorts in crunch time of that opening set.

“It’s kind of like what I traditionally tell you,” said Gilmour Academy sixth-year head coach Danny Coughlin, who was eyeing his 400th career win, which also includes his days leading the Kenston program to a Division I state final-four appearance in 2012.

“It takes us a little bit of time to figure out the other team to find our rhythm,” he said. “Tipp City was big. They’re aggressive. You know, we were struggling to put hands on balls for blocking. It took us a lot longer to adjust and do what we needed to do. So, that first set just got away from us, and we ran out of time.”

Behind a match-high 19 kills, four aces and four blocks by 6-foot-1 junior middle Kathryn Randorf, behind a .324 team hitting clip and behind a state-record performance by 5-foot-11 junior outside hitter Sabrina Gremm, Gilmour Academy secured its seventh state title game appearance since 2008.

“I used the phrase with the girls: ‘Expect the battle. Want the battle. Win the battle,’” Coughlin said. “And, so, I told them that going into the second set, ‘Here comes the battle kids. Get ready and settle in, because it’s going to take extended sets to win.’”

Gilmour 5-foot-8 senior libero and first-team all-Ohioan Emmy Klika would finish with a match-high 17 digs, as Tippecanoe hitters didn’t do enough to avoid her consistent and reliable back-row defense.

But what the Tipp City spikes did do a nice job of was putting balls under the elbows of Gilmour’s high blocking efforts at the net, resulting in the Lady Lancers adjusting to move up their opposite back defender and moving in their left back, Coughlin said.

“We were struggling with that,” he said. “They weren’t taking big, overpowering swings. I told one of my girls in the timeouts, ‘We’re overpowering them. We’re bullying them.’ But they’re taking shots and just putting them off our block into the middle of the court, and we were struggling to pick them up.”

In the second frame, Gilmour’s Klika went on a five-point service run for a 13-9 upper hand, but Tippecanoe came right back to tie it up at 13-13.

After it was 18-18, the Lady Lancers closed out the stanza on a 7-0 run with Randorf serving up the final six points, which featured two aces, two Tippecanoe errors, a kill by Randorf and a block by 5-foot-11 senior middle Brinn MacLellan.

“Well, we started blocking balls,” Coughlin said. “I think, in that run, Kathryn had a couple good aces, threw them out of system, and they pushed balls out on the outside. I think we had maybe one or two blocks, and that made all the difference right there – we started putting more hands on balls at the net.”

With the match tied, 1-1, Gilmour faced a 22-19 deficit in the third set, but the Lady Lancers again utilized their closing know-how on a 6-1 run, thanks to the serving of senior setter Ava Nestor – who had 51 assists and 13 digs – as well as the front-row dominance of MacLellan, who had three kills and a block on that run.

It was finally at that point when the Gilmour spikers started feeling comfortable, with Tippecanoe chasing their middles all over the place, which allowed for pin hitters like Gremm, 15 kills, 5-foot-10 senior Jocelyn Carter, nine kills, and 6-foot sophomore Anna Rarick, four kills, to capitalize.

“It was about that point that Tippecanoe was getting uncomfortable, because now they had to defend five hitters,” Coughlin said. “And (MacLellan) was invaluable. That girl’s engine just doesn’t quit. And her speed to the ball, it just keeps one to two defenders on her every time.

While the Lady Lancers had all the momentum with the 2-1 lead, Coughlin didn’t tell his spikers that the match was theirs to win.

Instead, he asked his girls if they were ready to finally go to work entering the fourth set, he said.

“I said, ‘Are you done messing around?’ I said, ‘Let’s finish this game,’” Coughlin said. “I said, ‘You guys are in your rhythm now. You’re feeling comfortable with the way we’re playing.’ I said, ‘We’re finally doing everything we should have been doing in set one.’

“And they went out and jumped all over Tipp City. I think, once we hit 17 (points), you know, I think 17 is a tipping point in volleyball. If another team gets 17, it messes with your head. And once we hit 17, we started getting more energetic, because we knew how we were playing.”

First, the Lady Lancers took command, 10-6, on a six-point run that featured two kills and two blocks by Gremm, with Rarick at the service stripe. They never looked back.

After getting to the 17-12 tipping point, the Gilmour girls took away the paddles and capsized Tippecanoe’s season on an 8-3 run to finish off a 25-15 dominating final stanza, handing the Lady Red Devils their first loss of 2020.

Gilmour outhit Tippecanoe, .533 to .167, in that fourth set, with each side taking 30 attempts, but the Lady Lancers had 18 kills to Tipp City’s nine.

“At some point, they knew the luck was running out for them,” Coughlin said. “They weren’t getting platforms on balls with bigs, they weren’t getting the kills they were in sets one, two and three, we were blocking balls, and things were just going our way at that point.”

While middles Randorf, 19 kills on a .387 hitting clip, and MacLellan, 12 kills on a .323 clip, were doing their typical middle things throughout the duration of the match, it was Gremm who took over that fourth set with seven of her 15 kills in that frame.

“I looked at Kelsey (Polak) on the bench, and I go, ‘I think we have playoff Sabrina,’” Coughlin said he told his assistant coach in regards to Gremm. “Sabrina has been invaluable this entire playoff run.

“She’s probably the best out-of-system ball hitter we have, and some of the balls she was scoring points on, they weren’t great sets. But I use the term that outside hitters have to take out the garbage. With the way she jumps and the way she elevates and the way her wrist snaps, she can take a ball 8 feet off of the net and she’s driving it into the ground.”

Putting Tippecanoe under water, Gilmour advanced to take on state No. 4-ranked Notre Dame-Cathedral Latin (14-4), a regular-season rival, in the state championship game on Sunday, when the Lady Lancers came from behind in dramatic fashion late in the fifth set to capture their program’s first Division II title.