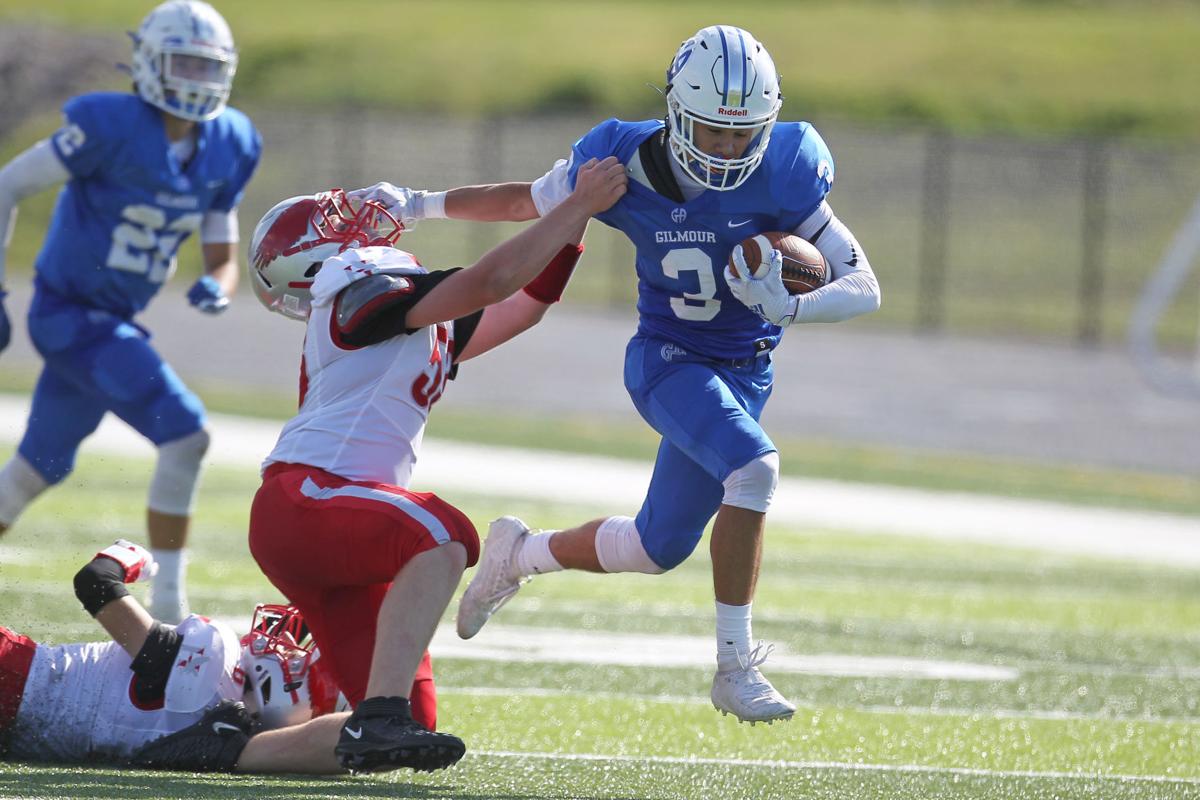 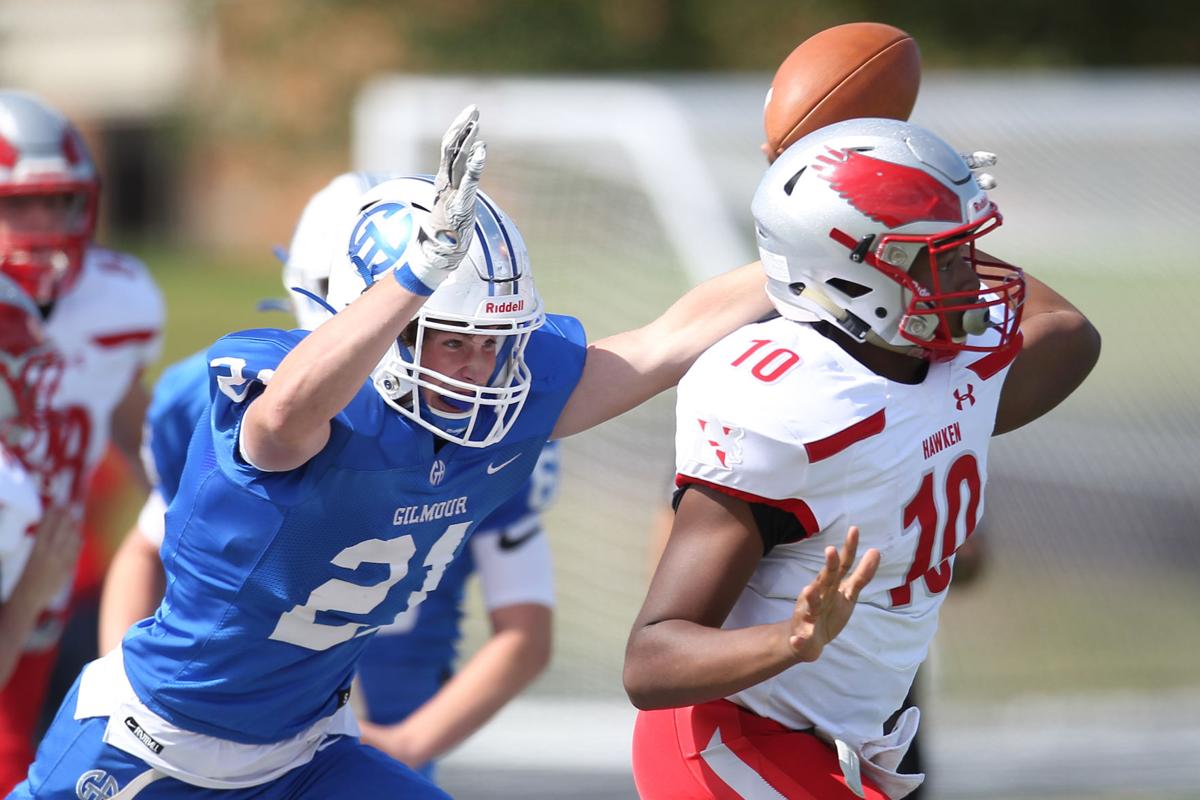 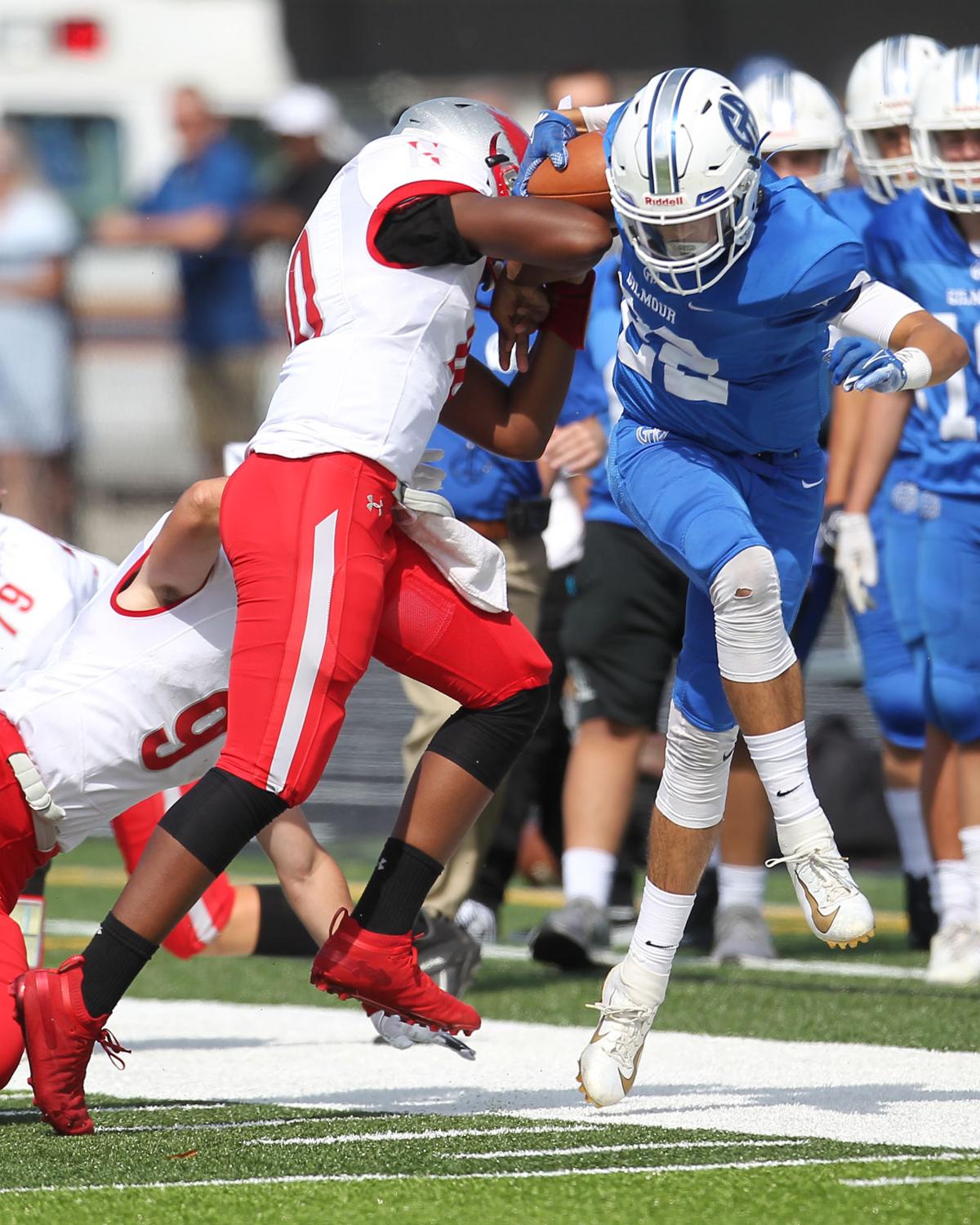 Gilmour senior Nathan Reichard (right) is knocked out of bounds by Hawken sophomore Terrence Robinson during a punt return on Saturday.

Gilmour senior Nathan Reichard (right) is knocked out of bounds by Hawken sophomore Terrence Robinson during a punt return on Saturday.

Hawken School moved the pigskin plenty, but it was the Gilmour Academy gridders (2-1) who were punching it in the end zone during a battle for the helmet on Saturday afternoon at Weber Stadium in Gates Mills.

The visiting Hawks (1-2) outgained Gilmour, 331 yards to 323 yards, with 68 plays compared to the Lancers’ 41, but that’s because the hosts were less busy moving the chains and more occupied with scoring for their fourth straight victory against Hawken, 41-14.

But with the Lancers having to ride their defense in a pair of fourth-quarter battles to start the season, Gilmour fifth-year head coach Chris Kosiorek said he was more focused on his offense taking care of business against Hawken.

“The message after the first two weeks was to start fast coming out of the first quarter and putting points on the board,” Kosiorek said. “And we did that. We put 14 on real quick, and then we were up, 35-7, at halftime, and that was just a great way to open up a big rivalry game.

“So, I was happy with that, because any time you do that, you’re obviously stressing the other team to maybe change some of the stuff they thought they were maybe going to be able to do.”

Hawken answered on a 2-yard touchdown run by 5-foot-11 sophomore quarterback Terrence Robinson and an extra point by Josh Lombardo to cut the deficit, 14-7, early in the second quarter, but that momentum was short-lived.

Reichard finished the game with four catches for 110 yards and three touchdowns.

“He had a big game,” Kosiorek said. “Obviously, he’s a young man who has been a starter for us for three years, and we didn’t throw the ball a lot last year, but he definitely is a great weapon to have out there on the perimeter, and he got open a couple of times and had a big game for us.”

Jevnikar punched in a 1-yard keeper with 4:42 to go in the second quarter for the 35-7 upper hand at the break.

“Thomas (Richardson) and Dan Jevnikar both played at quarterback, and they both did a great job of leading the offense,” Kosiorek said. “They’re both talented young men and both sophomores, so they both still need a lot of work. So, we just feel the more we can get both of them work and game-time experience, the better off we’re going to be in the long run with the depth on our team.

“But we had good balance both running and throwing to keep their defense off guard.”

Krebs broke loose on a 56-yard touchdown run to put Gilmour up, 41-7, and enact a running clock with 8:40 to go in the third quarter.

Hawken 170-pound junior running back Zach Miller found the end zone on a 14-yard run with 9:14 left in the game for the eventual 41-14 final. Miller led Hawken’s offense with 28 carries for 188 yards and had one catch for 10 yards.

“I was a little disappointed defensively,” Kosiorek said. “I thought they ran a little bit more on us than I was hoping. So, we’ve got to get that fixed up.”

University School (1-2) was up against a superior foe, but coughing up three turnovers early did not help the Preppers in their 35-0 road loss against Division II Willoughby South (3-0) on Friday night in Lake County.

Capitalizing on two interceptions and a fumble recovery, the host Rebels owned a 28-0 lead at the quarter make and a 35-0 lead two minutes into the second quarter, before thunderstorms rolled in for a game-shortened final with 8:55 to go in the half.

Overall, South outgained University, 263 yards to 57 yards, with no turnovers.

Up next, University will attempt to rebound with a home game against Division III Cleveland John Hay (0-3) at 2 p.m. Saturday at Scovil Field in Hunting Valley.