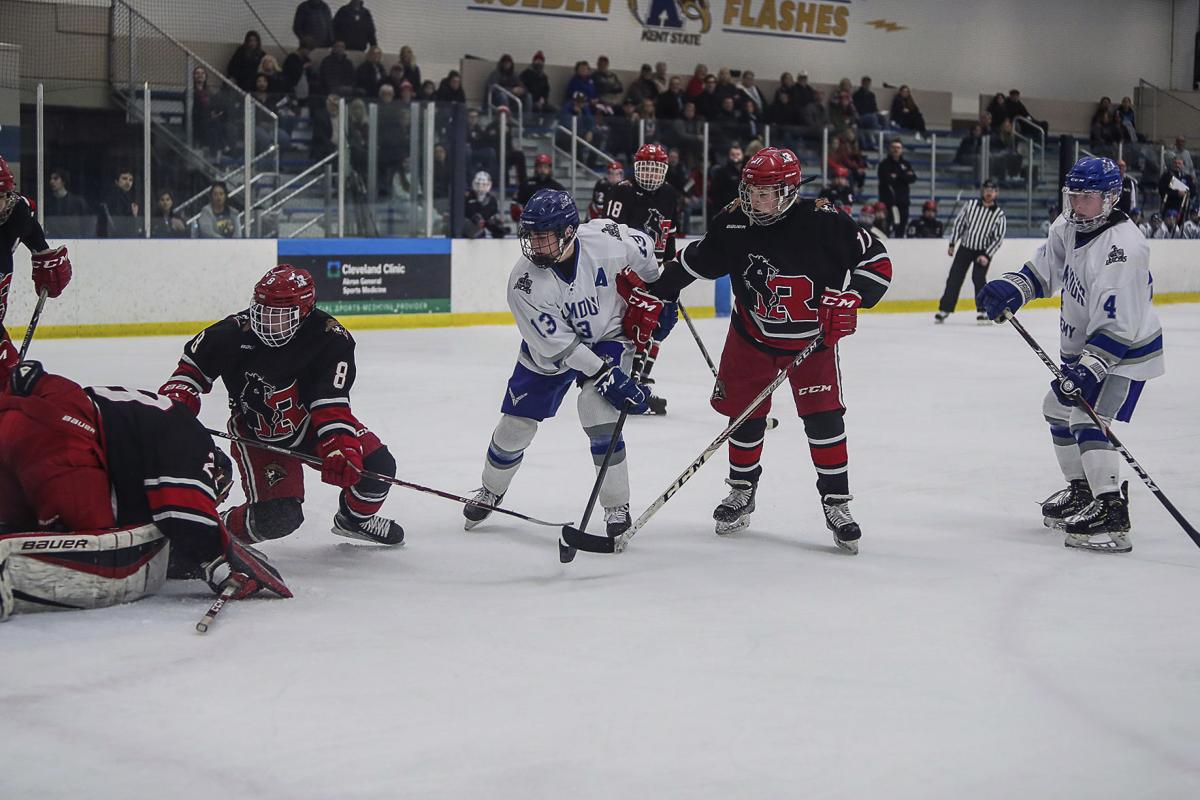 Gilmour Academy senior forward Justin Evans (center) puts a puck on cage during the Ice Lancers’ thumping of Kent Roosevelt, 8-1, in a playoff opener on Feb. 22 at Kent State University. Evans led Gilmour with 30 goals and 28 assists during a 30-7-1 campaign this season. 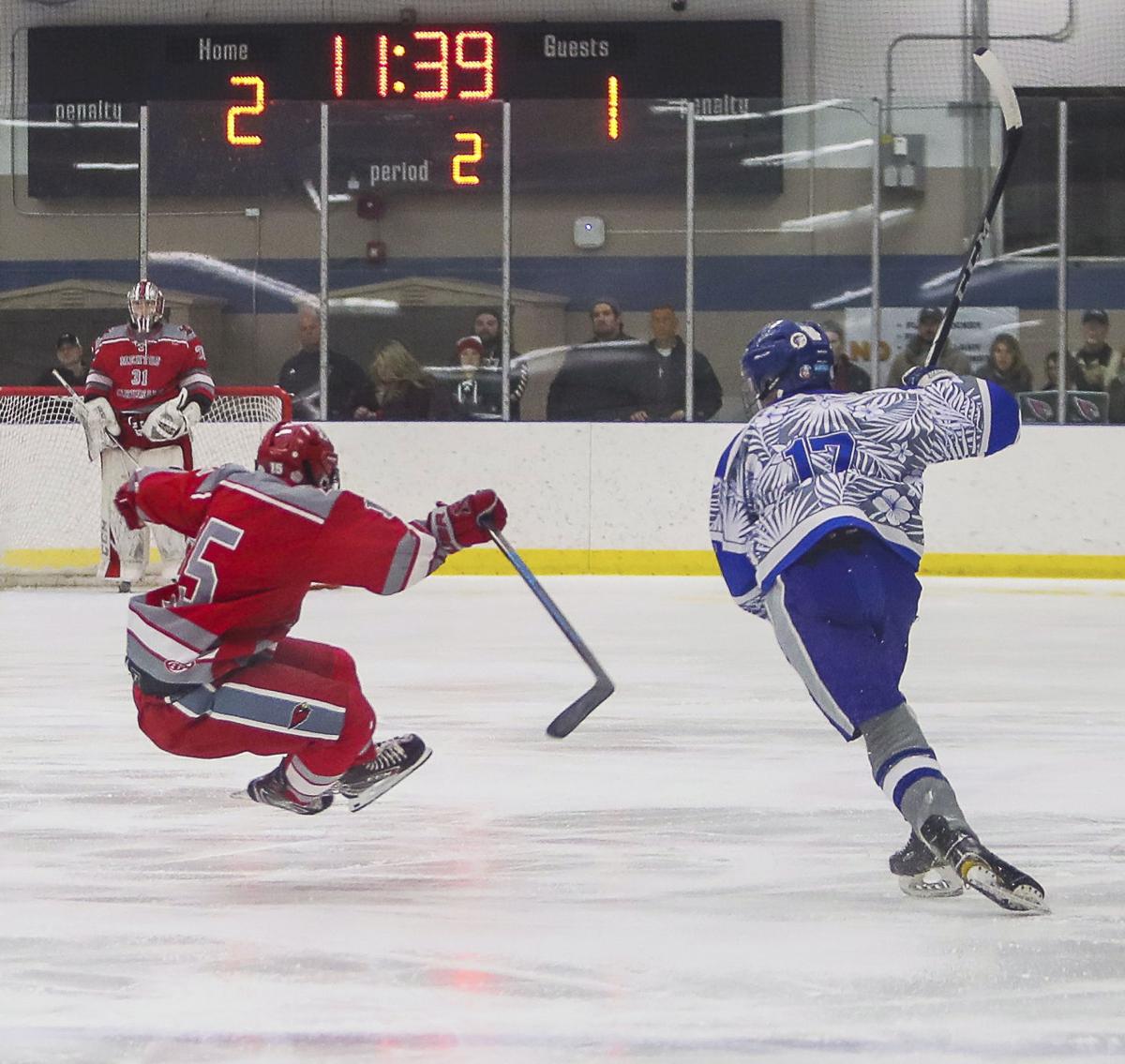 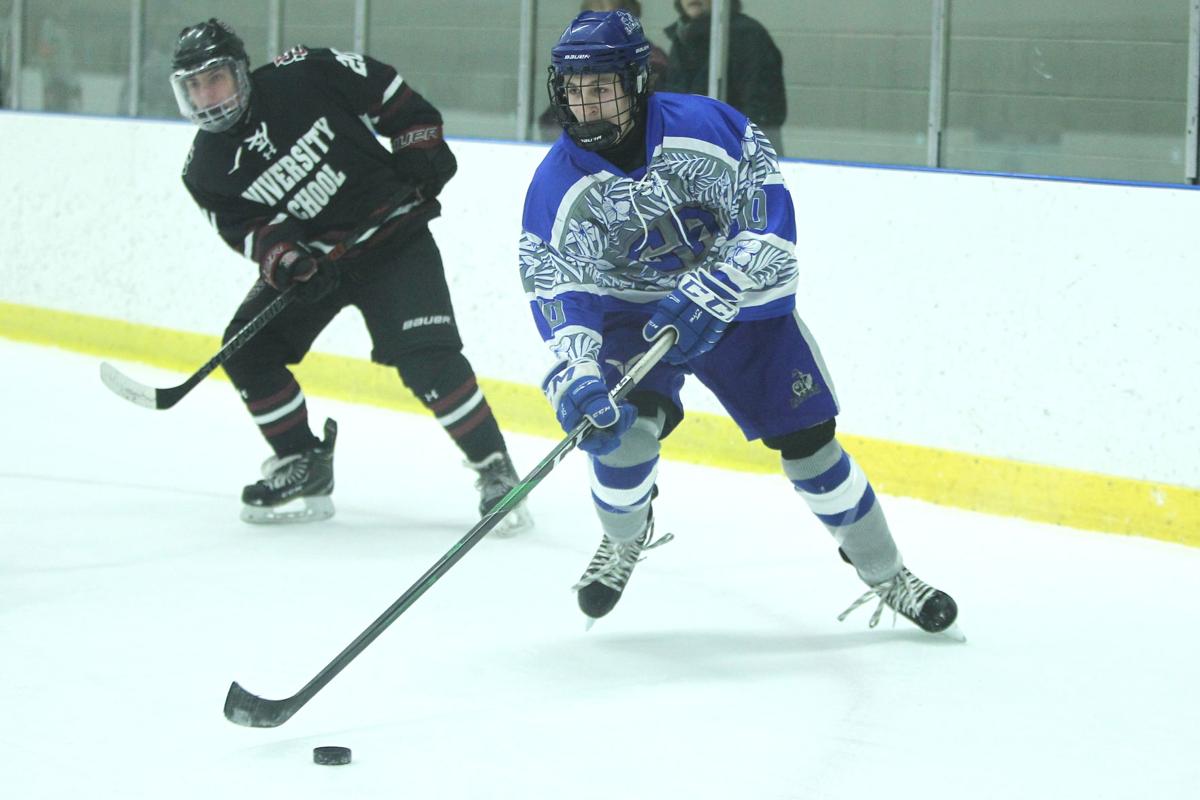 Gilmour Academy senior forward Justin Evans (center) puts a puck on cage during the Ice Lancers’ thumping of Kent Roosevelt, 8-1, in a playoff opener on Feb. 22 at Kent State University. Evans led Gilmour with 30 goals and 28 assists during a 30-7-1 campaign this season.

Gilmour Academy 15th-year head varsity hockey coach John Malloy might have been feeling sorry for his players, including four seniors who punched their program’s first state final-four ticket since 2011.

The Ice Lancers were zoned in for a state title during practice last Monday, Tuesday and Wednesday, gearing to take on state No. 1-ranked and four-time defending champion St. Ignatius in the semifinals at noon Saturday at Nationwide Arena in Columbus.

In the aftermath of Ohio Gov. Mike DeWine’s directive last Tuesday – to limit all sporting events to athletes, parents and others essential to the game – the Gilmour puck-handlers still had the green light to compete on the big stage, even if it meant a reduced crowd of four family member per player.

So, Gilmour’s Malloy might have been feeling sorry for his players with their lost opportunity, but that wasn’t his first train of thought earlier this week.

“When you talk about coaching, part of the goal is that you always try to get each player to pull his own weight but also share in the responsibilities, and then it’s not the me show,” Malloy said. “I always think about the book, ‘The Boys in the Boat,’ which is the story about an American crew and how they row back in the ‘30s.”

He was referring to the novel by Daniel James Brown about eight American rowers and their coxswain, who had an epic quest for gold in their octuple scull during the 1936 Berlin Olympics.

“When you’re in those boats, you can be the strongest, but, if you pull too hard, you can actually slow the boat down,” Malloy said. “The key is working together. And I think right now that’s what we need in the country and the world, is more pulling together, because it can all fall apart if people don’t act responsibly.”

For Malloy, he’s coached in state final-four games in the past, including with the 2011 and 2008 Lancers, as well as with Cleveland Heights during the Tigers’ glory days in the mid-1980s.

In that regard, he wasn’t feeling sorry for himself but rather for his players.

“For our seniors and some of our younger kids who are going to move up and play with the prep team, you know, this was it,” Malloy said. “This was something that we’ve been talking about all year and working towards, and, so, I just wanted to empathize for them. And there was no way to help them through that other than to say let’s just stay together as a team and look at what we did as a positive this year.”

As it stands now, the Lancers finished their campaign 30-7-1 with a Great Lakes Hockey League banner and Cleveland Cup trophy, their first playoff win against rival University School in 10 tries, a district title and a No. 3 ranking in the state.

Hofstrom was the lone freshman on Gilmour’s varsity team that struggled through a 4-31 campaign and a first-round exit of the 2017 playoffs.

“We’ve been working hard all season to prepare for this moment,” Hofstrom said. “We finally get to the moment to finally have a chance to be named state champs and to play Ignatius, which has always been our goal, to beat them, and now we can’t even go and play. There will always be that thought that we might have had the chance to win, and now we’ll never know, which is the worst part about it.”

In the third week of this season, Gilmour lost a 2-1 home game against St. Ignatius on Dec. 11. The Lancers were the only team from Ohio to give Ignatius any sort of run for its money this season.

And riding an 11-game win streak since Jan. 28, Gilmour has been playing its best hockey of the season during its Cleveland Cup and district title runs.

“We knew we were going to need the game of our lives to beat them,” Iacobell said of St. Ignatius. “At the same time, we knew there was nothing we couldn’t do, and, if we had just put in the work, we could have done it.

“The difference between our team this year and last year is that last year we had a lot of skill, but we never really got better. I think our entire team this year has progressively been getting better, and we would have given it 100 percent.”

Hofstrom said he would have rather lost to St. Ignatius and had closure to his senior season than finish with a win in the district championship and a lifetime of wondering what if.

Instead, the closure the Ice Lancers got was a team scrimmage last Thursday, with all but one player showing up for what was presumed to be the final get-together on the ice.

“It was fun, because, for me, I didn’t really think about it being my last time on the ice,” Hofstrom said. “I just went out there and tried having a good time with my teammates, and we still played like it was an actual game with that competitive environment. But it was fun to do, and I can at least say that, if this was the last thing I did on the ice, it was a fun note I left off on with all my teammates.”

Team Malloy ended up defeated Team Soroka. Marc Soroka is a long-time assistant coach to Malloy. Coach Malloy said he even let Soroka have the first pick in a schoolyard selection of players for the scrimmage.

“It was for all the marbles, as they may say,” Malloy said. “It was a knock-down, drag-out scrimmage. So, we got the boys fired up, and we talked to them beforehand that, ‘Hey, these are things that are out of our control. In life, it’s a good lesson. There’s going to be things that are just not in your control, and you have to make the best of the situation.’ And my emphasis was, by keeping yourself safe, you’re actually keeping your loved ones safe.

“So, we had a good scrimmage. It was a lot of fun. I’m happy to say coach Team Malloy came out on top, because I would have never heard the end of it if Team Soroka won.”

While the likelihood of the remaining winter state tournaments being resumed is slim, the OHSAA had not cancelled them, as of Wednesday. The OHSAA has a press conference to provide updates for winter tournaments and spring sports scheduled for noon this Thursday.

Iacobell said he’s glad the OHSAA left the possibility open, but he’s also a realist and knows the state tournament probably won’t get made up.

“We were hoping for getting a shot at a state championship this year,” he said. “But I think, either way, we’re trying not to take away from everything else we did this year. I think we had a very successful season. And I think at this point we have to put safety over our states.”