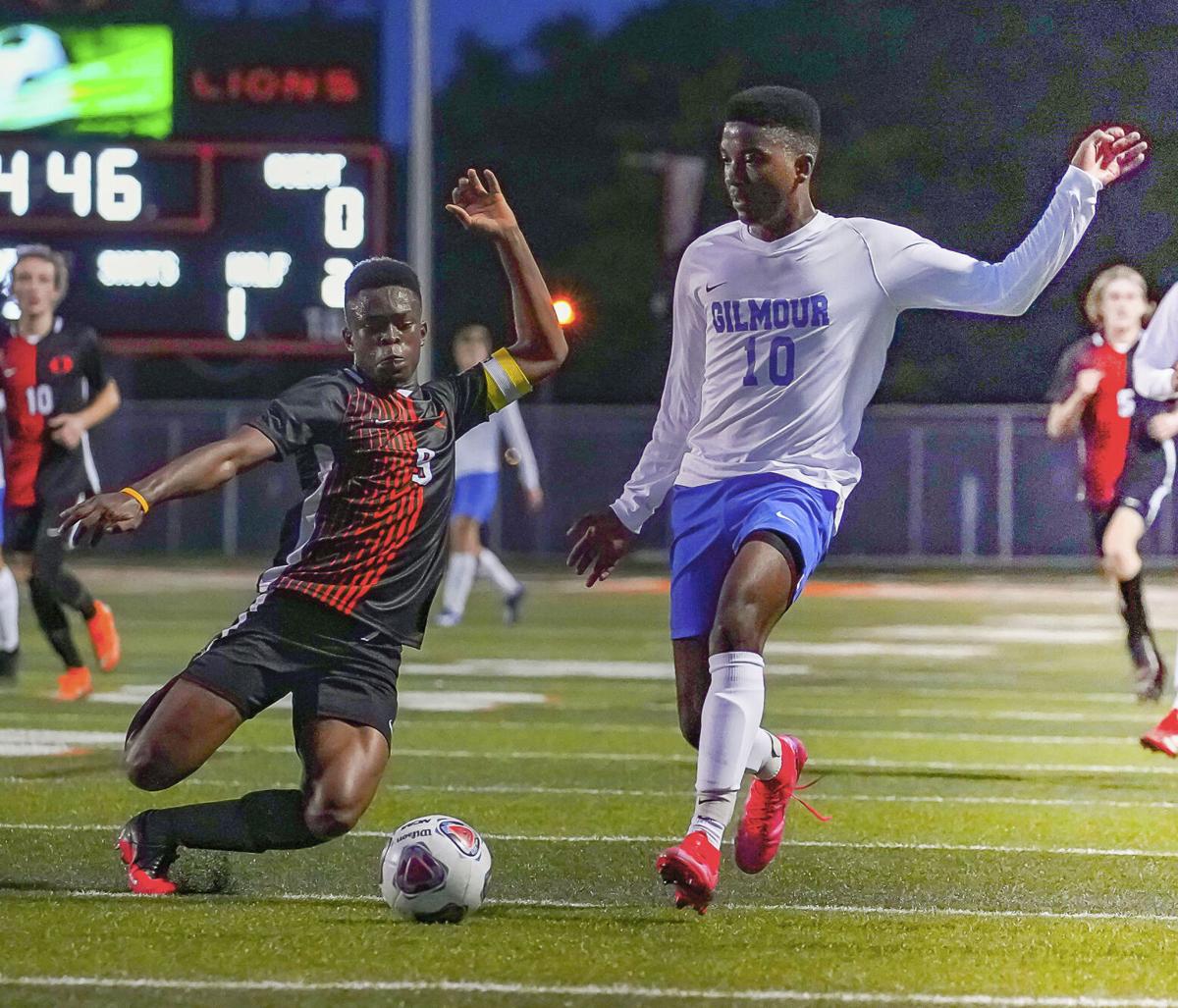 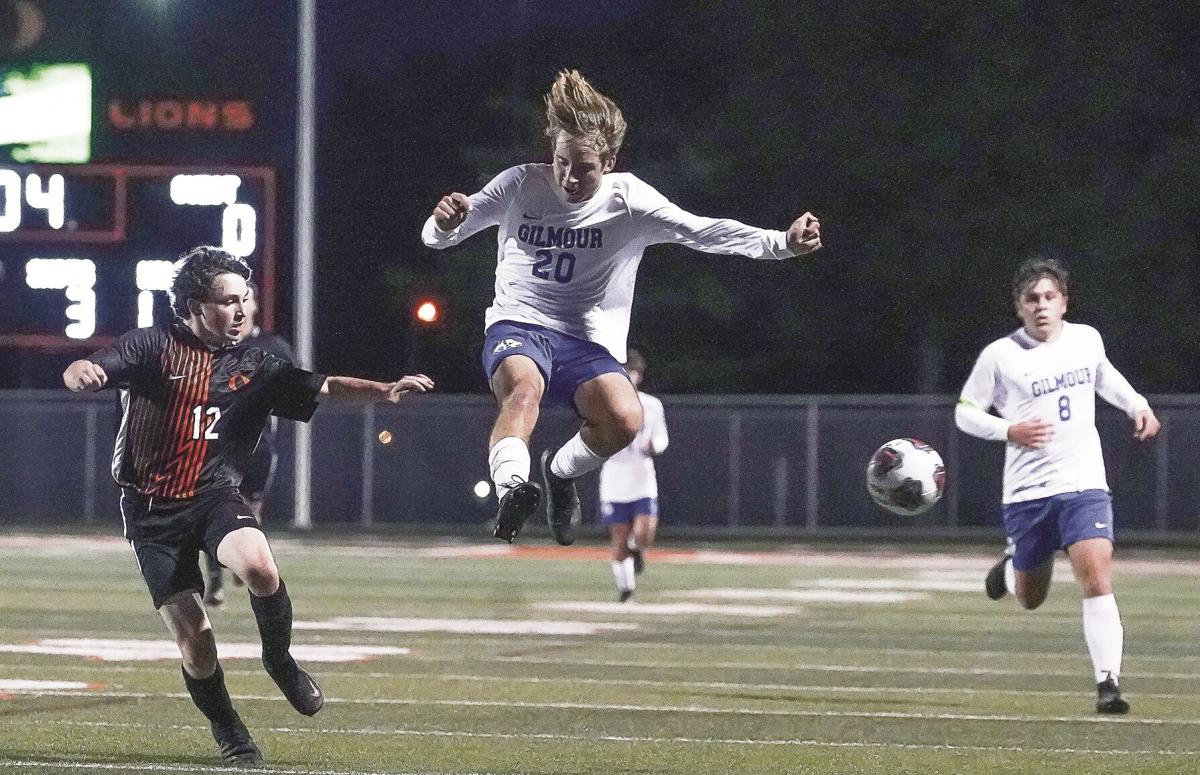 The Gilmour Academy boys soccer team was undefeated with six shutouts in eight games, surrendering just three goals to start their 2020 campaign at 7-0-1.

That all changed when the Lancers hit the road to take on an always dangerous Orange side Saturday night at Lewis Black Stadium in Pepper Pike.

The host Lions were 2-2 and coming off a 1-0 loss against Perry, which Gilmour had previously defeated, 1-0. But that didn’t stop the Orange boys from handing Gilmour its first loss of the season, 4-1, behind some offensive fireworks from senior forward Cade Horvat.

“We played pretty well,” he said. “We came out and got a goal in the first two or three minutes, which really helped us. We had been struggling a little bit in our first couple of games to find the back of the net, but we were creating a lot of chances and just couldn’t finish.

“On Saturday, we were really able to finish and put some of those chances to bed.”

Gilmour was without one of its starting center midfielders, but, for the most part, Cvecko said he thought his Lions were in control of the game.

In the second minute, Gilmour played a ball back to senior keeper Matt Beck, who attempted to clear it down field, but Orange’s Horvat intercepted it just outside the 18-yard box, took a touch around three Lancer defenders and ripped a shot from 15 yards out that hit of Beck’s hand and trickled far post.

“(Horvat) plays up top, and he’s a guy that’s usually just around the goal and knows how to find rebounds and create his own chances,” Cvecko said. “So, he definitely has a nose for the goal and is good at finding the ball when it’s bouncing in the box and taking advantage of his chances when he has them.”

But Cvecko said he sometimes moves guys around depending on personnel and how the game is going. Specifically, junior outside defenseman Evan Friedman often gets the nod to move up to attack.

“He actually scored a goal, and he scored in one of our other games too,” the coach said. “We just get loads of energy from him, and he’s really quick and agile, and we like to throw him up there sometimes just to create some havoc and really pressure opposing defenses. Both times we’ve done that, he’s found a goal.”

While Orange took the early lead, it was still 1-0 at halftime. Cvecko said the Lions had a few good looks they just couldn’t tuck away.

The message at intermission was more about continuing to grind rather than making any considerable adjustments, he said.

“We saw that Gilmour had all of their players in the middle and playing with a sweeper,” Cvecko said. “So, our one change was to try get the ball in those wider areas and try to find where the space was at, and we were able to hit that a little bit better in the second half.”

Focused on creating opportunities wide, Orange capitalized on a pair of corner kicks in the 49th and 51st minutes to take a 3-0 upper hand.

Friedman buried the 2-0 tally on a pinball opportunity that got bobbled around at the 6-yard box before he got a touch to finish it in the upper, far post.

And then the 3-0 tally came when Gilmour got a touch on Abrams’ corner to clear it out of the 18-yard box, but Horvat was in position again to regather possession and rocket home a far-post rip from 25 yards out.

Delivering those corner kicks on Saturday, Abrams is a transfer to Orange from University School, and his younger brother, freshman Drew Abrams, has started as an outside defender for the Lions this season.

“Both of them are technical, they know how to play,” Cvecko said. “They played club growing up, so they’re well versed in that, and they know how to be dangerous and understand the game pretty well. They’ve complemented other guys well and both have been good additions to our team and work hard.”

In the 58th minute, Orange put the game out of reach, 4-0, when junior central defensive midfielder Matthew Krasnow touched a pass inside the box to Horvat, who touched it back to the top of the box, where Krasnow pulled the trigger on a one-timer lefty to the far post.

“Matt’s been really good for us,” Cvecko said. “He’s more defensive-minded, because he’s pretty athletic, physical and is pretty good at keeping their No. 10 locked up for the most part, but he does have the ability to go forward as well. So, he’s a guy that tries to get on the ball and combine with all those guys in the middle, and that goal was just a result of that.”

Gilmour’s lone tally came on a through ball that resulted in Orange senior goalie Tyler Spitz coming to the top of the box to make a sliding tackle, but the ball was deflected wide with the Lancer attackman tracking down the possession and sending in a cross for an empty-net finish in the 69th minute.

With senior center backs Tanner Slesh and Pascal Morris-Barrie taking care of business for the majority of the game, Spitz only needed to make three saves.

Spitz got the start on senior night against Gilmour, while Orange junior keeper Trevor Moss had 17 saves in the Lions’ first four games.

On Tuesday night, Orange lost a 3-1 home battle against Hawken School (3-0-1) to move to 3-3 on the season. The Hawks had a pair of tallies from junior Jackson Goldberg and one from senior Gavin Rourke, while senior Alex Shulman had an assist.