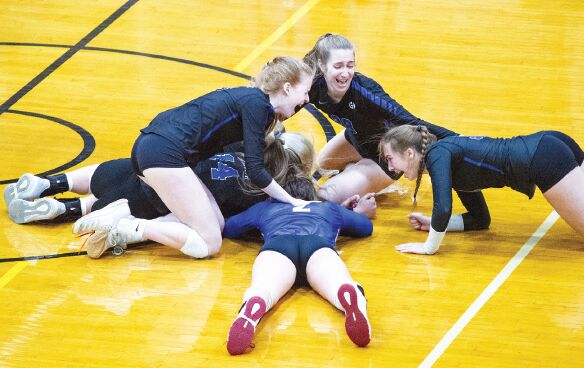 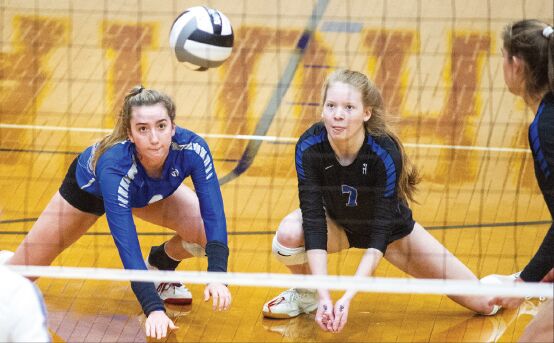 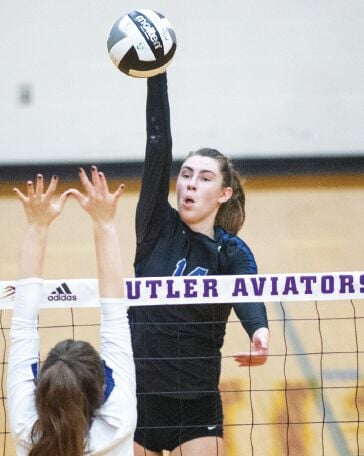 Gilmour 6-foot-1 junior middle Kathryn Randorf plays high above the net during her 24-kill performance on a .362 clip in the Division II title game Sunday. 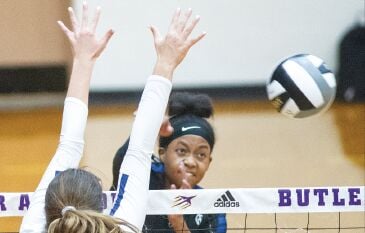 Gilmour 5-foot-10 senior opposite Jocelyn Carter avoids a block during her 15-kill performance on a .333 hitting clip in Sunday’s Division II title game.

Gilmour 6-foot-1 junior middle Kathryn Randorf plays high above the net during her 24-kill performance on a .362 clip in the Division II title game Sunday.

Gilmour 5-foot-10 senior opposite Jocelyn Carter avoids a block during her 15-kill performance on a .333 hitting clip in Sunday’s Division II title game.

The mission was to win it all, but the Gilmour Academy spikers appeared destined for their program’s sixth state runner-up finish since 2008.

Those who’ve paid attention to the sport since it changed to rally scoring 15 years ago knew the odds were heavily in NDCL’s favor to join the 2014 and 2015 Lady Lions as state champions. NDCL entered the match at 14-4 and ranked No. 4 in the state coaches poll.

But those who have paid attention to state No. 1-ranked Gilmour Academy, which entered the match at 22-1, knew one should never count out the Lady Lancers, especially when 6-foot-1 junior middle Kathryn Randorf, also an all-Ohioan, is in the front row.

“So, I thought our defense did a phenomenal job today. For a team that was picked to come in and walk all over us, we were right there.”

Gilmour’s Randorf, who already had 20 kills to her name, looked like she had four more left in her. The first came on a side-out, in-your-face, stare-down hit to cut the Lady Lancers’ deficit, 13-12, before a timeout ensued.

Lady Lancer junior defensive specialist Brooke Clair entered the match in an attempt to serve out the final three points. She kept NDCL out of system and allowed senior setter Ava Nestor to go back to Randorf for another kill out of the middle, tying the game at 13.

That Gilmour trio repeated another serve, set, kill combo to take a 14-13 upper hand, as all eyes remained on the confident body language of Randorf, who wasn’t to be denied.

While Gilmour sixth-year head coach Danny Coughlin had been preaching to his players to make the more uncomfortable sets ever since the Lady Lancers’ lone loss off the 2020 campaign against Division I state No. 1-ranked Padua Franciscan on Sept. 24, Randorf was just too hot during Saturday’s Division II championship game.

And when a state title is on the line, it’s an unwritten rule that teams have to live and die by their bester hitter.

Out of another NDCL timeout, Clair put another serve in play and then came up with a dig against NDCL’s attack, before Nestor went right back to Randorf on a bump set that Randorf put down off a Lady Lion blocker for her fourth straight kill to end the match and secure the Lady Lancers their first Division II state crown.

While NDCL outhit Gilmour, .235 to .194, Randorf finished with a match-high 24 kills, including seven putdowns in that final frame.

“I feel like I just put my trust in Ava (Nestor), and I told her after every point, ‘I’ve got you,’” Randorf said. “‘You can get me whenever you need to,’ and I felt that mentally I was ready to hit. I wanted the ball, obviously, and I knew she was going to make the right choice for all of us.”

Although Gilmour was less efficient with its hitting percentage, the Lady Lancers’ aggressive play provided more free-ball opportunities, as they recorded 21 more attacks and seven more kills for the match.

Gilmour also lost its first set in the state semifinals a two days earlier, as slow starts were somewhat of a recurring theme all season.

Lady Lancer senior libero Emmy Klika, a University of Pittsburgh signee who tallied a match-high 22 digs, said the in-game adjustments are more focused on the defensive side rather than what Gilmour wants to do attacking-wise.

“Defense includes blocking and back-row defense,” she said. “So, we just had to make sure we were working together. Defenders can’t defend unless we communicate with the blockers to fill the holes that they’re leaving for us. They’re the ones funneling the balls where the defenders are supposed to be.

“But I think the first set we just had to learn their shots. I think the defense and blockers responded really well.”

The Lady Lancers never trailed through the entirety of the second frame, taking their largest lead at 17-10 off a first-touch kill by 5-foot-10 senior opposite hitter Jocelyn Carter, a University of North Carolina at Greensboro signee, and then a 20-13 lead on 6-foot sophomore Anna Rarick’s ace.

Carter, who hit .333 for the match, put down five of her 15 kills in that second frame and then added four more in the third stanza to ignite the Lady Lancers’ attack.

In the third set, Gilmour’s hitters struggled some against NDCL’s Bartulovic, who came up with four of her seven blocks in that frame.

And, again, while the Lady Lancers’ hitting percentage was lower in that stanza, their shear number of attacks outweighed NDCL, 42-36, for a better side-out ratio to ultimately take the set, 25-22. Gilmour 5-foot-11 junior outside Sabrina Gremm, who hit .333 for the match, put down four of her 14 kills in that frame.

Gilmour 5-foot-11 senior middle Brinn MacLellan, who finished with six kills on 26 attacks for the match, said she was disappointed in her own hitting against NDCL’s dominant blocking game.

“I’m disappointed in the way I played today, and I’m unbelievably proud of the way my teammates picked that up,” she said. “Every player is going to have a bad game. Unfortunately, my worst game of the season came in the state championship final game – not convenient.

While MacLellan was hard on herself, she did lead her team with seven block assists, including a pivotal rejection when the Lady Lancers were trailing, 10-6, in that third frame, which ignited a 4-0 run.

“Today I was just off,” she said. “I couldn’t control that. But what I could control was my energy and the way I talked to my other teammates. So, that’s what I focused on. I also tried to focus on my blocking, and at least that kind of went in my favor.”

Gilmour shot itself in the foot with 14 miscues in the fourth frame – with five violations, five hitting errors, three service errors and a receiving error – but a lot of that had to do with the pressure NDCL kept on the Lady Lancers.

Janosy was third for her team in attacks for the match but had the steadiest swing with 10 kills on a .455 hitting clip.

“They weren’t going away,” Coughlin said. “They’re going to battle. No one shows up to these games to lose. So, we knew they weren’t just going to go, ‘Oh, well. We’re done.’ They showed up, they battled, they took that fourth set, and we had to regroup and just stay within striking distance like we did when it was our time to get our runs.”

While Gilmour had four seniors dressed for its state championship run this season, the Lady Lancers will graduate five seniors from their program.

The Saturday before Gilmour’s first official practice, 6-foot middle hitter Caroline Rarick, who started since her freshman year, tore her ACL and fractured her tibia during a freak accident at her family’s lake house.

But just as she had all season, Rarick was there to support her team and her younger sister, who finished with five kills, two aces, three digs and a block in the title game on Sunday.

“I was so proud of her,” Rarick said of watching her younger sister compete. “She works so hard. I feel like she always does her best every single day no matter what. She puts in everything. She’ll stay after. She’ll come early. So, in general, I was just so happy of her performance.

“So, I’m really glad she was able to come and show up, do her best and help win the championship.”