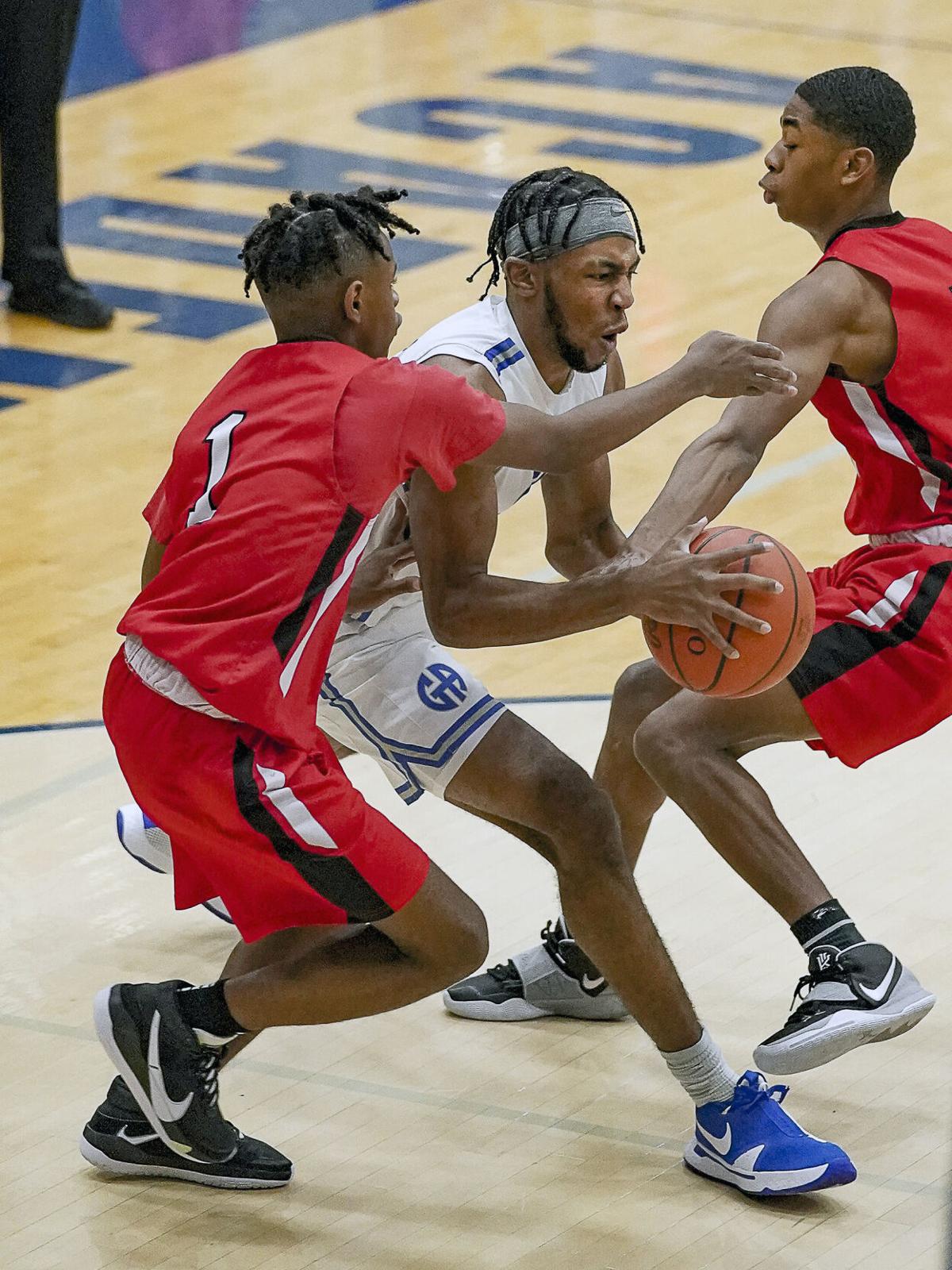 Gilmour’s sophomore wing Brandon Rose tries to drive into the paint against a swarm of Red Raiders’ defenders on Jan. 16 at Gilmour Academy. 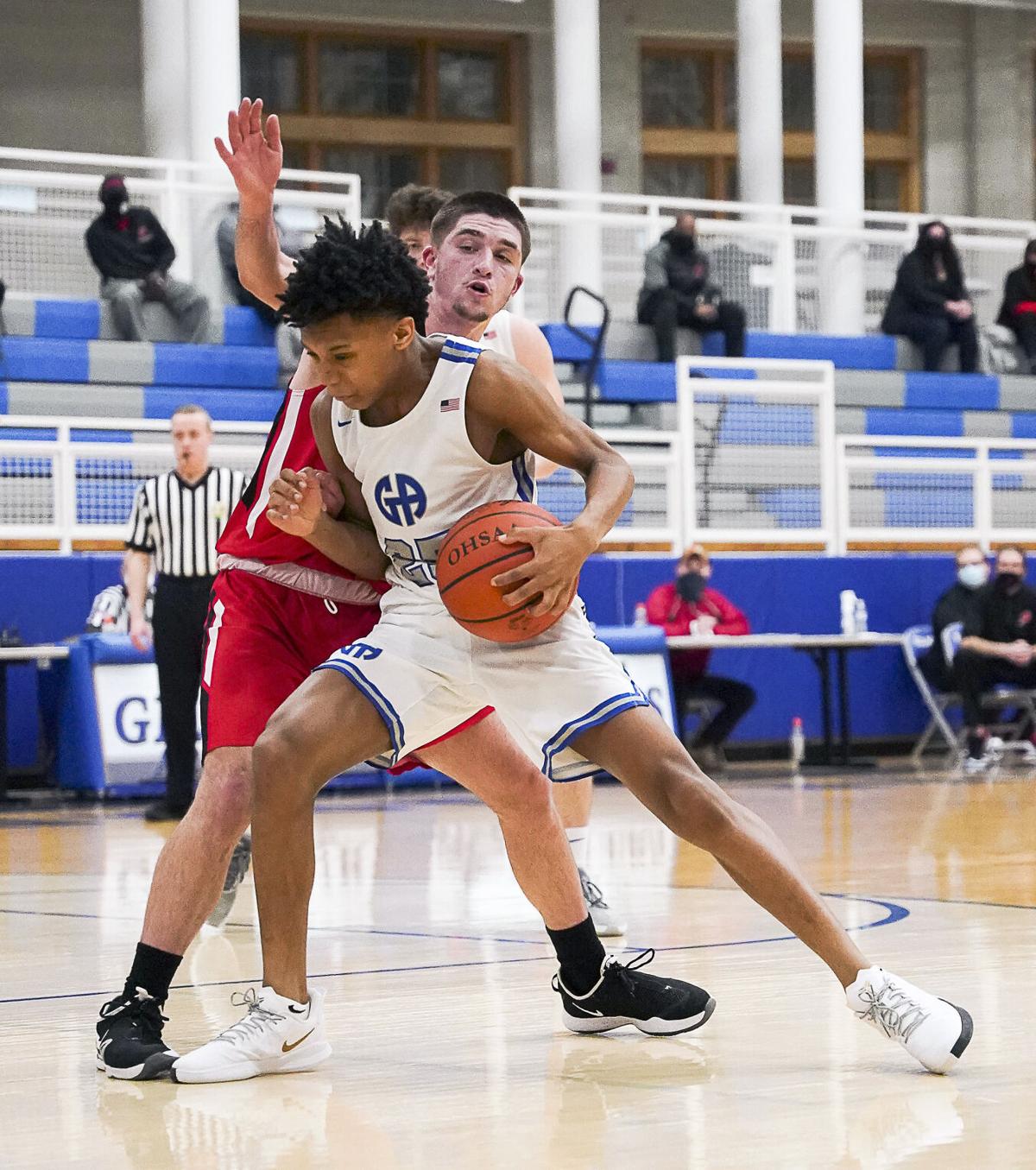 Gilmour’s sophomore wing Brandon Rose tries to drive into the paint against a swarm of Red Raiders’ defenders on Jan. 16 at Gilmour Academy.

The Gilmour Academy Lancers boys basketball team had endured a roller coaster of a week. The team’s morale was high after capturing a road victory against Lake Catholic last Tuesday but dropped a tough one to Lorain the previous Friday after taking an early lead over the Division I powerhouse.

It has been one of the most unusual seasons of high school basketball to date. That doesn’t change the fact that although Gilmour hasn’t played many games it is already the middle of January. The annual sectional tournament is right around the corner and it’s time for the Lancers to find a rhythm and begin to shape its identity. Gilmour hopefully took a step in the right direction on Jan. 16 with a dominating 54-24 victory over the Harvey Red Raiders last Saturday night.

“I thought our guys came out with the same intensity and effort as last night,” said Gilmour head coach Dan DeCrane, “It was good to see us bounce back quickly on that end. I think it showed. What I was most impressed with was our defense. We were flying around, creating turnovers, deflections and our guys kind of embodied, ‘Hey we’re not going to have any letdown of our emotion, focus and energy.’ It was really good tonight.”

Gilmour got off to a flying start in the first quarter. Senior guard Andre Rodgers, Jr. was key in the Lancers taking an early lead over Harvey. The 6-foot-1 guard constantly found the open man from beyond the arc and Gilmour swished four triples to take 16-4 lead with Rodgers, Jr. having assisted on three of them.

The Lancers’ guard missed several games earlier in the season due to a nagging ankle injury but is now back. He wasn’t fully at 100 percent when he first returned to game action but after going through several practices and having now played in four games he is slowly but surely returning to form. It means everything to Gilmour to have him return to the lineup.

“Andre is one our fastest players and one of the best passers, and best defensive players on the team so his role is on our team is very huge and he’s part of our winning,” said Lancers’ sophomore guard/forward Brandon Rose.

Gilmour made a concerted effort to keep the ball moving early on. That’s what led to the multiple three-pointers. The Red Raiders tried to disrupt the Lancers’ offense by playing a zone defense to run the three-point shooters off the line. It threw the Lancers off briefly but the team regained its offensive footing.

“It’s been something we’ve been seeing a lot more of and something that we’ve been working on a lot more on in practices kind of spacing and cutting in our zone. I think we’re getting there but we’re really trying to teach our guys to attack to draw to and find the open guy,” said coach DeCrane

Gilmour was locked on in the defense end. Harvey could do very little with the ball offensively in the second quarter. The Red Raiders didn’t put any points on the board until junior guard Hasan Jones II drained the team’s first field goal of the quarter with 1:35 left before halftime. The Lancers held Harvey to just three points and continued to whip the ball around to hold a 27-7 edge at the break. Gilmour finished the game 14 assists on 21 made baskets.

“It’s definitely really important,” said Lancers’ junior forward Ryan Mueller, “If we’re stagnant we don’t get a lot of motion and don’t score a lot but if we’re moving and everyone’s sharing the ball then it just happens and we all score.”

Gilmour’s identity is coming into focus. The team’s first priority is to remain committed on the defensive end and use that success to fuel its offense. The Lancers made some major strides last week to achieve that goal.

Mueller led all Gilmour scorers with 13 points, 12 rebounds and one blocked shot followed by sophomore guard Adisa Molton with 11 points and two assists. Jones II led the Red Raiders with 12 points, six rebounds and one assist and sophomore guard Des Thomas and senior guard Mataio Snyder each tallied five points. The Lancers will hit the road on Jan. 22 to face Padua Franciscan on Friday evening then will host Notre Dame-Cathedral Latin on Saturday.