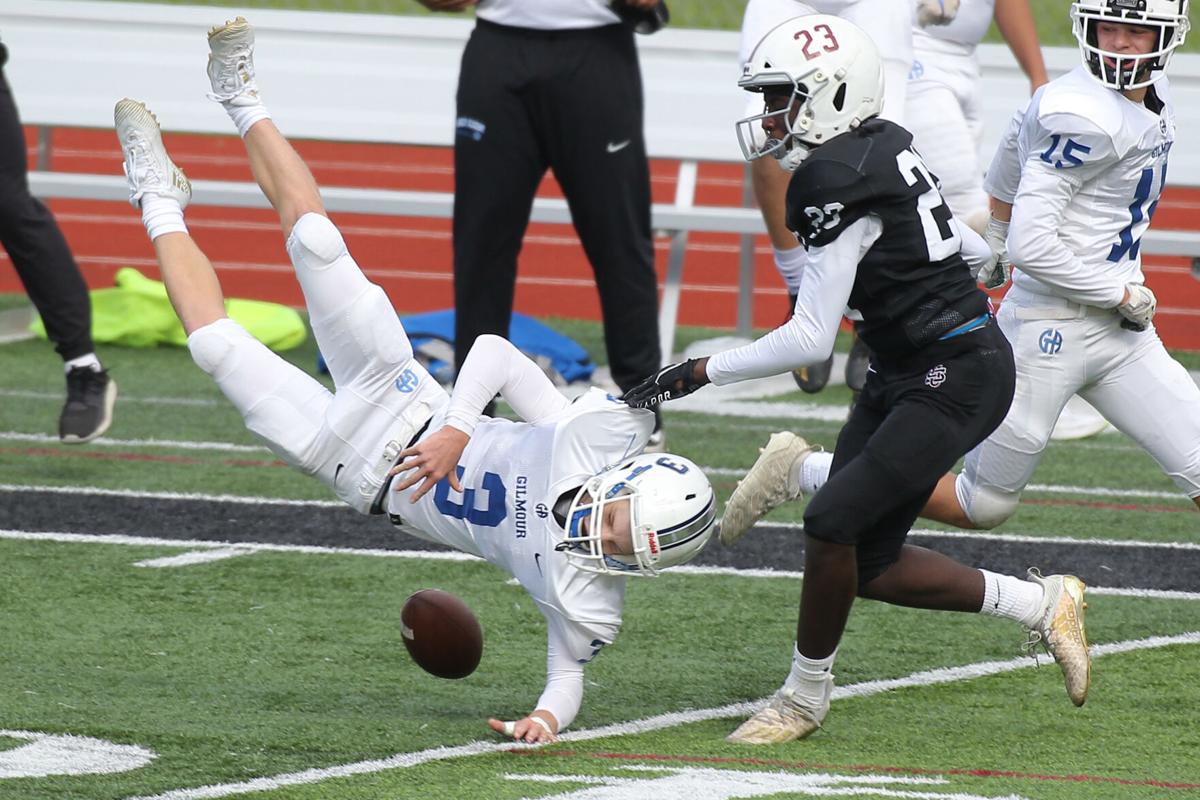 Gilmour Academy freshman defensive back Jake Kavcic (No. 3) can’t hold onto an interception on a University School pass intended for junior receiver Bryce Hodge (right) during the Lancers’ 26-21 road victory on Saturday afternoon at Scovil Field in Hunting Valley. 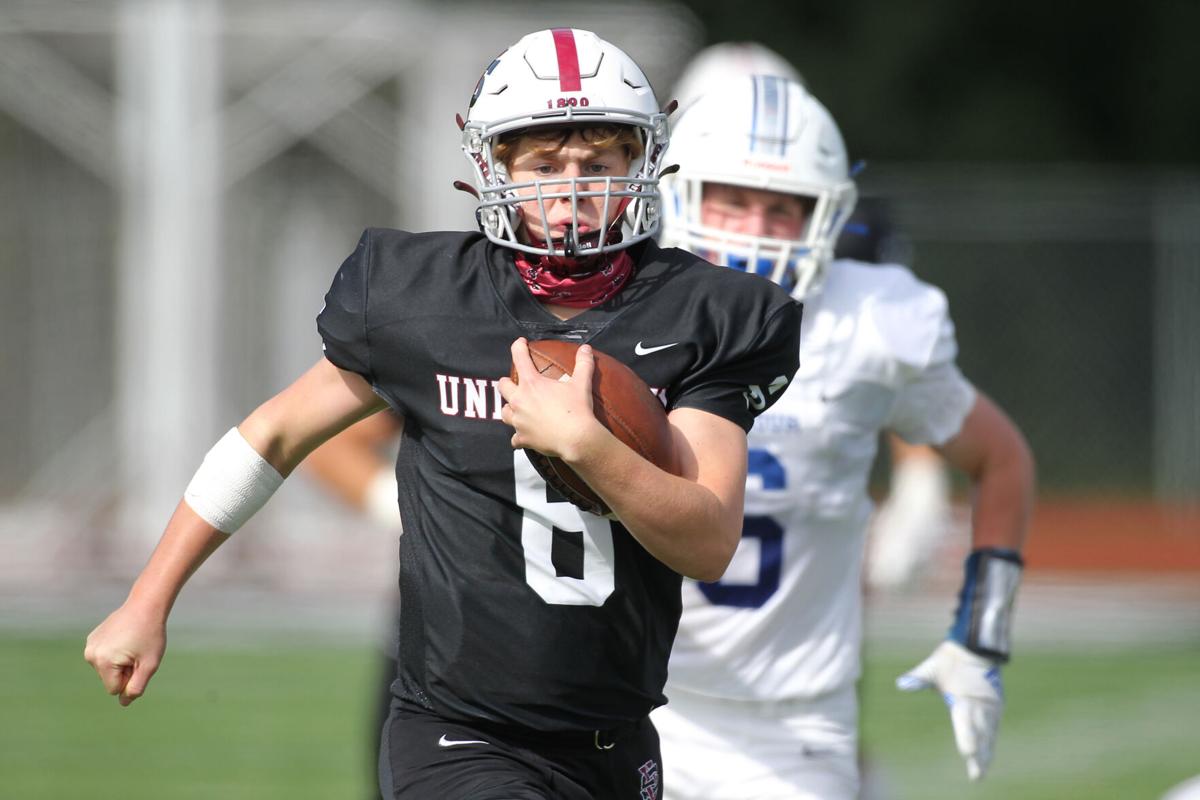 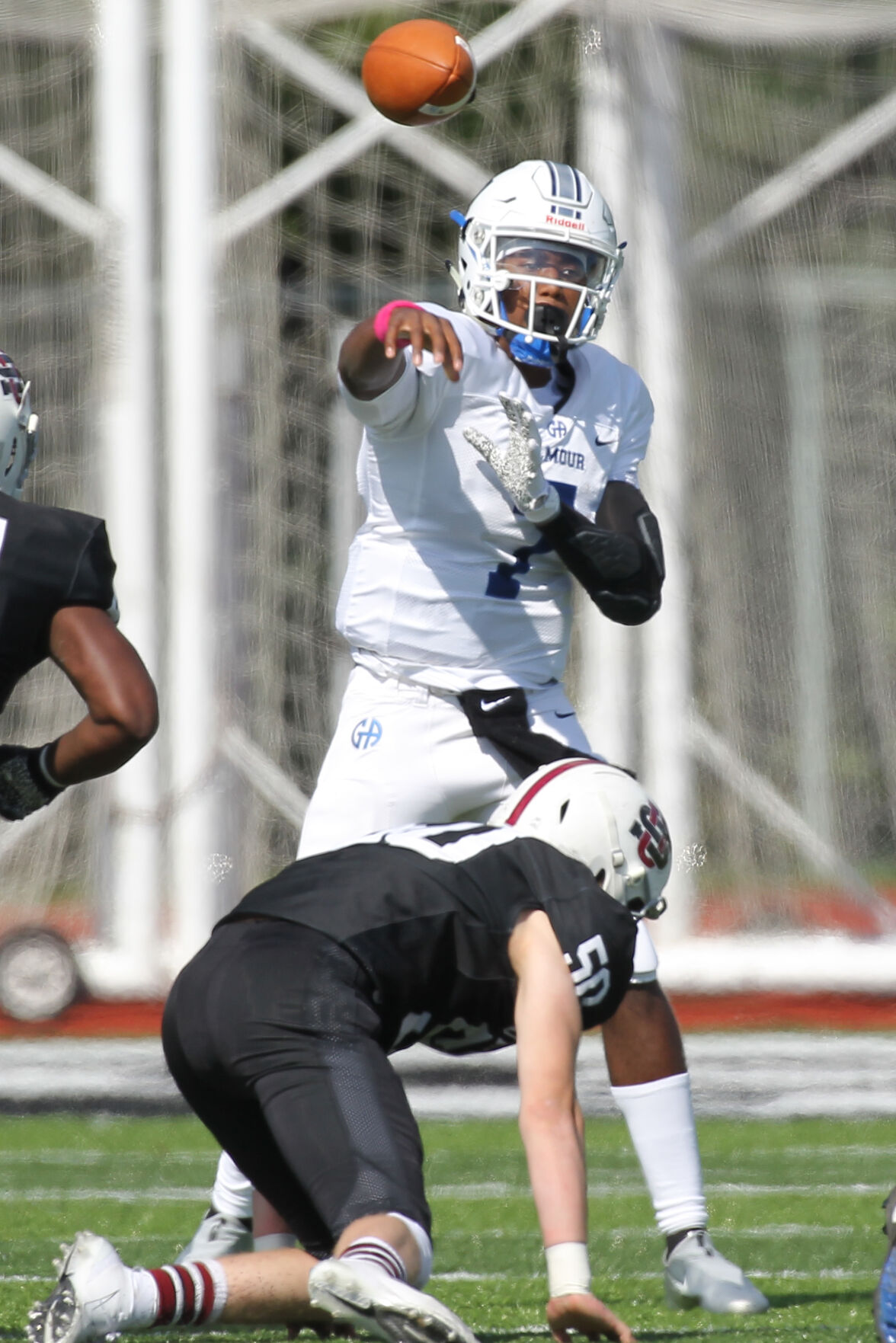 Gilmour Academy 6-foot-2 junior quarterback Thomas Richardson gets off a pass attempt during the Lancers’ 26-21 victory against University.

Gilmour Academy freshman defensive back Jake Kavcic (No. 3) can’t hold onto an interception on a University School pass intended for junior receiver Bryce Hodge (right) during the Lancers’ 26-21 road victory on Saturday afternoon at Scovil Field in Hunting Valley.

Gilmour Academy 6-foot-2 junior quarterback Thomas Richardson gets off a pass attempt during the Lancers’ 26-21 victory against University.

At least the Gilmour Academy gridders (3-3) won their rivalry game against Hawken School in week four, because a road test against rival University School (1-5) didn’t show much promise on Saturday afternoon at Scovil Field. At least in the first half it didn’t.

The host Preppers were having their way in the trenches with 175-pound senior running back Nick Flowers scoring on 28- and 4-yard touchdowns and with freshman quarterback Jackson Boyland breaking loose on a 42-yard touchdown run in his first start.

University’s offense had 200-plus yards in the first half, more than doubling Gilmour’s output, and owned a 21-6 lead at intermission. Flowers would finish the game with 33 carries for 178 yards.

“It was the opening kickoff,” Gilmour head coach Chris Kosiorek said. “They kicked off, they kicked it high, and Tino (Harper) was ready to get it, but he lost it in the sun and just didn’t get it. So, they recovered the kick at the (28-yard line), and first play they scored. You start a game like that, and it’s just a little shock.”

Down 14-0 at the quarter mark, the Lancers knew it was not the end of the world, he said.

Gilmour 6-foot-1 senior lineman Charlie Shepherd came up with an interception midway through the second quarter to open the door for Lancer 6-foot-2 junior quarterback Thomas Richardson to score on a 3-yard keeper to cut the deficit, 14-6, with 5:32 to go in the half.

“He did a great job of reading their screen,” Kosiorek said of Shepherd. “That’s something we work on a lot, and Mitch Lamosek, a defensive lineman, got one against JFK last week. So, our guys do a great job of recognizing those.”

After that Gilmour touchdown, University’s Boland, who finished with 71 yards passing and 84 yards rushing in his first start, broke loose on the 42-yard score for the 15-point Prepper lead at the break.

The odds weren’t in Gilmour’s favor, especially after the Lancers had leads or ties in the second halves of all three of their losses this season.

“Part of our season, we’ve been in all the games, and then just in that fourth quarter, we wear down or something doesn’t happen,” Kosiorek said. “So, our mental preparation was just to finish the game.”

A tale of two halves finally ensued in the Lancers’ favor.

Harper would finish the game with 24 carries for 232 yards.

“In most games, the first quarter is going to kind of determine what a game plan is for most teams,” Kosiorek said. “And they bottled us up and did a nice job defensively. But our offensive coaches saw some things we thought we could get them on and made a couple of adjustments at halftime.

“And Santino is just so explosive. You give him the ball, the chances of him being bottled up for that long are unlikely. He’s a special talent. You want to get him the ball as many times as possible, and good things are going to happen. That’s what happened in that third quarter.”

But University got its defense in order and managed to stop Harper short on a fourth-down play with 3:35 remaining in the game. The score was still 21-20 in the Preppers’ favor.

US had the opportunity to run out the clock, but Gilmour’s defense, which surrendered just 115 yards in the second half, managed to get off the field on fourth down with 47 seconds remaining to provide the Lancers’ offense one last shot on a 66-yard field.

“They were converting some fourth downs at the end, which, in hindsight, that could have been the backbreaker,” Kosiorek said. “But when it really counted, that last fourth down, we stopped them. And I kept telling our offensive staff to get the two-minute offense ready.”

The only problem was that Gilmour’s aerial attack had yet to gain a yard. But that didn’t stop signal-caller Richardson from putting together a miracle drive with four completions, including a 41-yard toss to 6-foot-3 senior Michael Snelling down to the red zone. Snelling was in triple-coverage on that play but made an over-the-head catch on the sideline.

Richardson then dialed up a 14-yard touchdown toss to Harper, who split a pair of defenders in the end zone, with 13 seconds remaining to finish off the comeback victory, 26-21, for the Lancers.

“He was lined up as a receiver, and our offensive coaches made the right call,” Kosiorek said. “It was in the corner of the end zone, and Tino made a great catch, and Thomas put it on the mark too. To execute that two-minute drive the way the guys did and the calls that were made was great.”

Overall, Gilmour outgained US, 349 yards to 323 yards, with Richardson finishing four-of-14 passing for 66 yards – all on the game-winning drive – along with 12 keepers for 51 yards. Sophomore Tommy McCrone also came up with a 7-yard reception on that final drive.

“It felt great. It felt great,” Kosiorek said. “I mean, it was something that all week our guys and coaching staff were looking forward to, some redemption of the past couple years. There was a lot of stuff that was just built up, and it was great to watch our guys practice and prepare all week.”