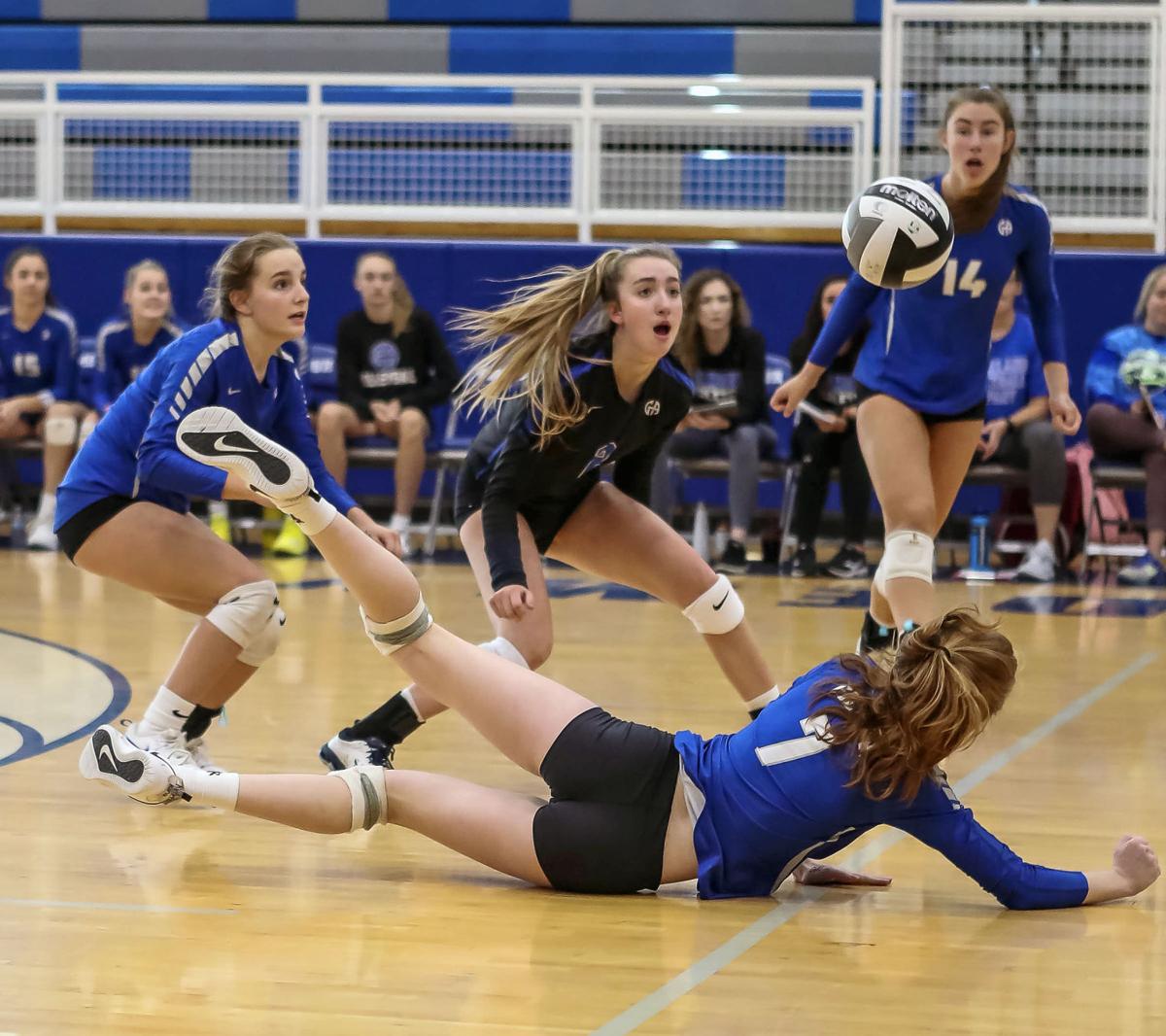 Gilmour Academy 6-foot freshman setter Anna Rarick takes a floor burn to come up with a diving dig at the awe of junior libero Emmy Klika (middle) during the Lady Lancers’ 2-0 victory against Brecksville-Broadview Heights in the opening match of their home tournament on Saturday afternoon in Gates Mills. 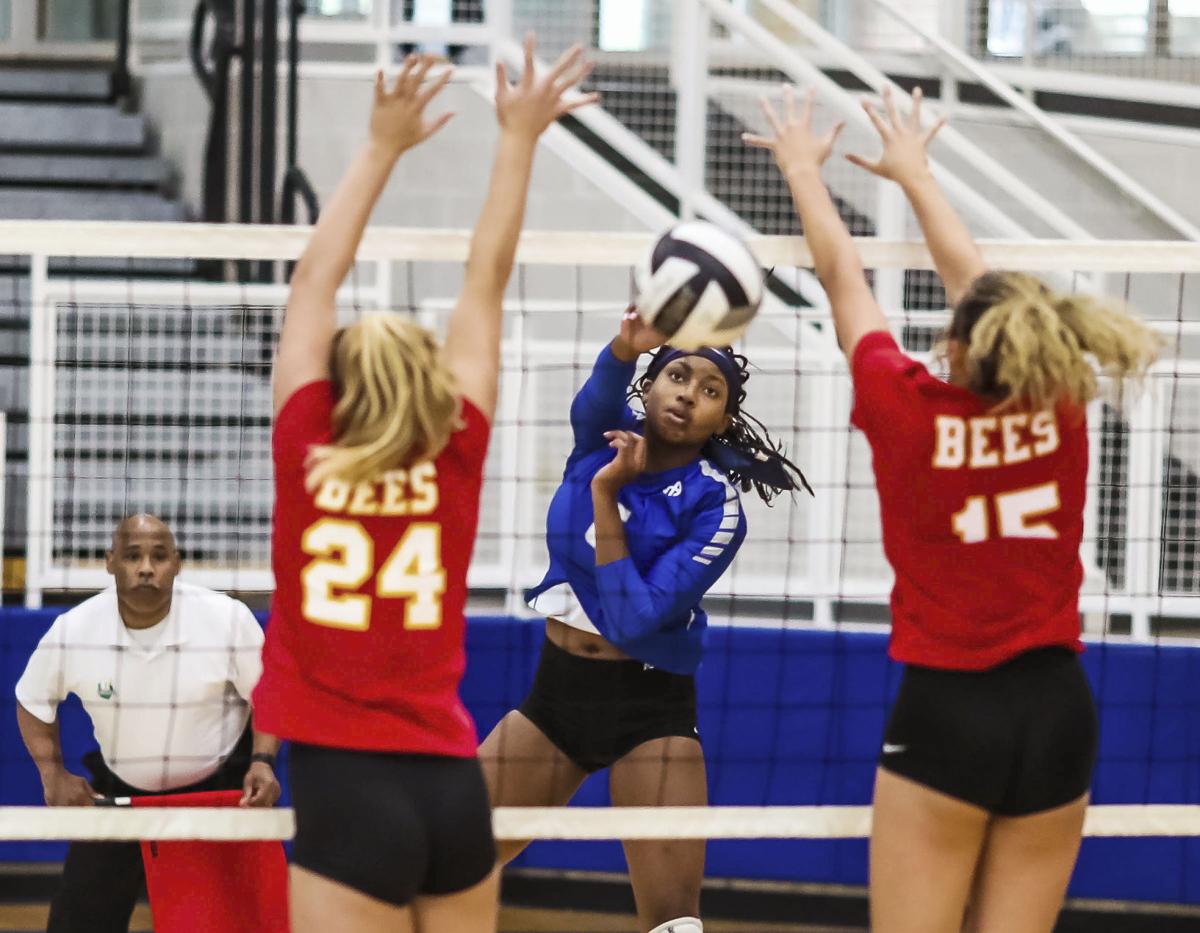 Gilmour Academy 6-foot freshman setter Anna Rarick takes a floor burn to come up with a diving dig at the awe of junior libero Emmy Klika (middle) during the Lady Lancers’ 2-0 victory against Brecksville-Broadview Heights in the opening match of their home tournament on Saturday afternoon in Gates Mills.

Gilmour Academy 5-foot-7 outside hitter and defensive specialist Brooke Clair had been playing lights out for the Lady Lancers entering their home eight-team volleyball invitational on Saturday in Gates Mills.

Through five matches, she was Gilmour’s third leading attacker with 1.9 kills per set and second leading defender with three digs per set during a 4-1 start. The Lady Lancers’ lone loss was against Division I state No. 7-ranked Magnificat, 25-20, 25-16, 32-30. Clair and 6-foot-1 sophomore outside hitter Kathryn Randorf had nine kills apiece in that match.

So, when the Lady Lancers were gearing up to host one of the most competitive tournaments in Northeast Ohio on Saturday, they were focused on bouncing back in their opening match against Division I Brecksville-Broadview Heights, a program that pushed eventual regional champion Solon to five sets in the 2018 playoffs.

But adversity would hit before that home tournament took off.

“What I was pleased most about was how they overcame obstacles,” Gilmour fifth-year head coach Danny Coughlin said. “Twelve hours prior to, we changed our lineup completely, because we lost our outside hitter, Brooke Clair.

“So, we had to do a lot of changing and rearranging of the offense, and that involved bringing up two kids who the day before were full-time JV kids. And the next thing you know, we’re throwing a freshman DS in the back row and a sophomore to middle hitter and moving Brinn (MacLellan) to the outside, which she had never done before. So, there was a lot of change Friday night.”

The extent of Clair’s injury is unknown until she has an MRI on Friday.

In Clair’s absence, part of the makeover included moving 5-foot-10 junior captain Brinn MacLellan to outside and relying on a young rotation that sometimes included three freshmen, two sophomores and a junior out on the court. In particular, Coughlin said he moved up freshman Rylyn Anderson to varsity to play some defensive specialist.

But the constant of 5-foot-7 junior libero Emmy Klika, a co-captain, getting up dig after dig, as well as the aggressive serving that coach Coughlin continues to instill in his program, helped the Lady Lancers adjust on the fly to put Brecksville-Broadview Heights away in two sets, 25-16, 25-13.

“We were a little rough getting started,” Coughlin said. “You know, Brecksville really gave us all we could handle in that first set. But then we started to calm down and get a feel for things. So, that’s what stood out and impressed me the most, was how they overcame the confusion.

“And we’re always a pretty tough serving team, so we started making our serves. And this team, they gel and get along so unbelievably great. It’s almost freakish. I mean, you can take 13 girls and stick them in a room for two hours, and, when you open the door, they’re still going to be excited and happy and get along.”

Not only did Emmy Klika collect 22 digs in that first match, but she served up three aces, while freshman sister Laney Klika had four aces. Gilmour had 10 aces overall.

While the Gilmour spikers have plenty of hitters, they lack the veteran leadership of 2019 graduate Megan Brzozowski, a 5-foot-10 setter who was a four-year starter and led the Lady Lancers to a state championship in 2015.

In a six-two system, Gilmour 6-foot freshman setter Anna Rarick had the hot hands in the opening match on Saturday, posting 15 assists, 10 digs, an ace and a kill against Brecksville-Broadview Heights. She’s a six-rotation player on a deep Lady Lancer roster.

“We changed some positions (without Clair), but we didn’t change our system,” Coughlin said. “I have a lot of faith in these kids. I would bet on Brinn MacLellan any day of the week. So, I trusted she was going to figure it out. And the ringleader of it all is Emmy Klika. When you have the ball control that we have, it tends to make everything easy. And her sister, Laney, is just as good.

“So, you throw the ball control in there, and it makes life easier on setters, where they don’t have to worry about pursuing and chasing balls. It allows them to get it up to our hitters, because we have so many weapons. We can go anywhere with the ball.”

In the semifinals, the Lady Lancers took on fellow Division II foe Norwalk, which had just knocked off Division III state No. 10-ranked Waynedale, according to the Ohio High School Volleyball Coaches Association pollsters.

But Gilmour again took care of business in straight sets against the Lady Truckers, 27-25, 25-16, behind another 22-dig, three-ace performance by the elder Klika, a team-high seven kills by Carter and 12 blocks overall, including three apiece from MacLellan, Randorf and the elder Rarick.

The six-two system opened up for the younger Rarick to put down four kills with 13 assists, eight digs, an ace and a block, while 5-foot-6 junior setter Ava Nestor had 12 assists, five digs and three aces.

“Norwalk is a scrappy, scrappy team,” Coughlin said. “I think, if it wasn’t for us being top-to-bottom bigger than them, you know, if they had more size, they’d be a more challenging team, because they kept balls alive and kept putting them in good spots to make us earn the points we scored.”

But Coughlin pointed back to the elder Klika, who tallied 25 digs in that match.

“The lopsidedness is I had Emmy Klika,” Coughlin said. “Emmy had game-saving digs. It was 23-23 in set one, and there was a ball in no right did Emmy have a chance getting, and she popped it back into the court, and we scored on it.

“So, the difference was our back line, our ball control, our defense – it’s sick.”

Improving to 7-1 following the three tournament victories, Gilmour was ranked No. 7 among Division II contenders in the first coaches poll, which comes on the heels of a 14-13 regional runner-up campaign that ended with a 3-0 loss to Lake Catholic in 2018.

This year, Coughlin said the numbers 15 and 11 have a special meaning.

“The reason while those numbers are important is because Lake Catholic beat us by 11 points, but we had 15 service errors,” he said. “So, that’s not going to happen again, and the girls know that at the end of the day, ‘Great, congratulations to Lake Catholic, but we handed you 15 free points, and you beat us by 11.’

Up next, Gilmour will travel to take on Division II No. 19-ranked Beaumont at 6:30 p.m. Thursday.