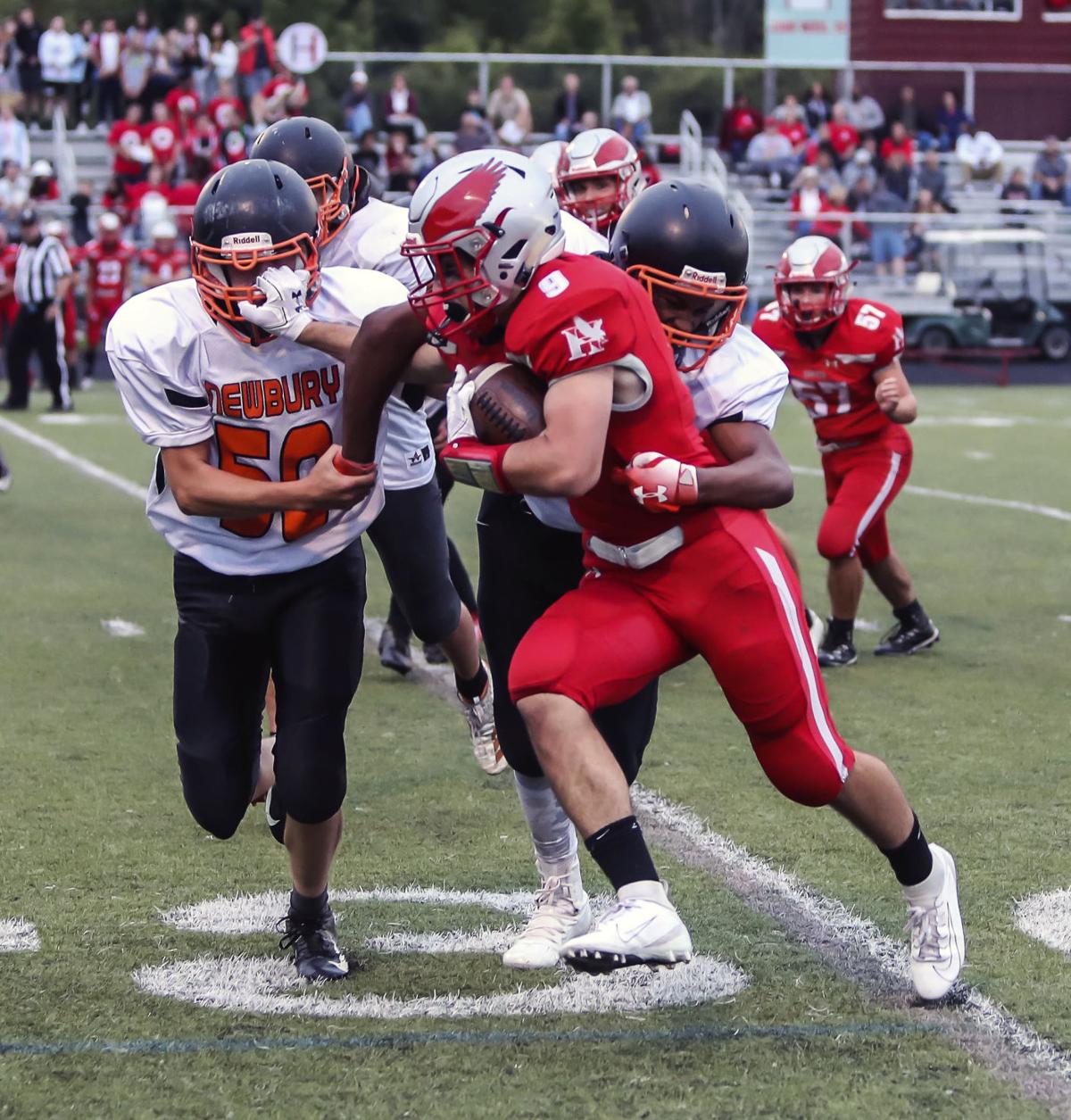 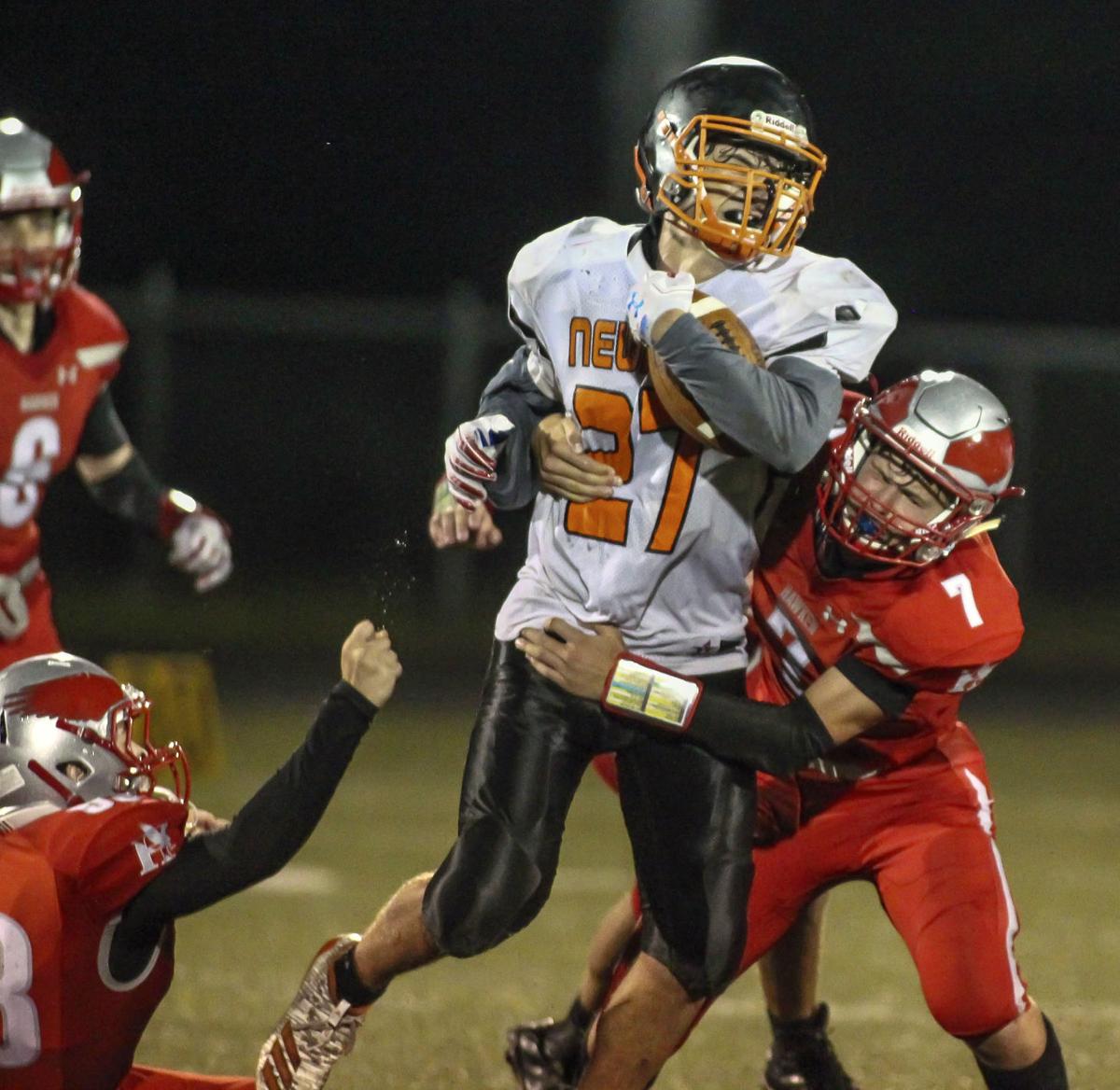 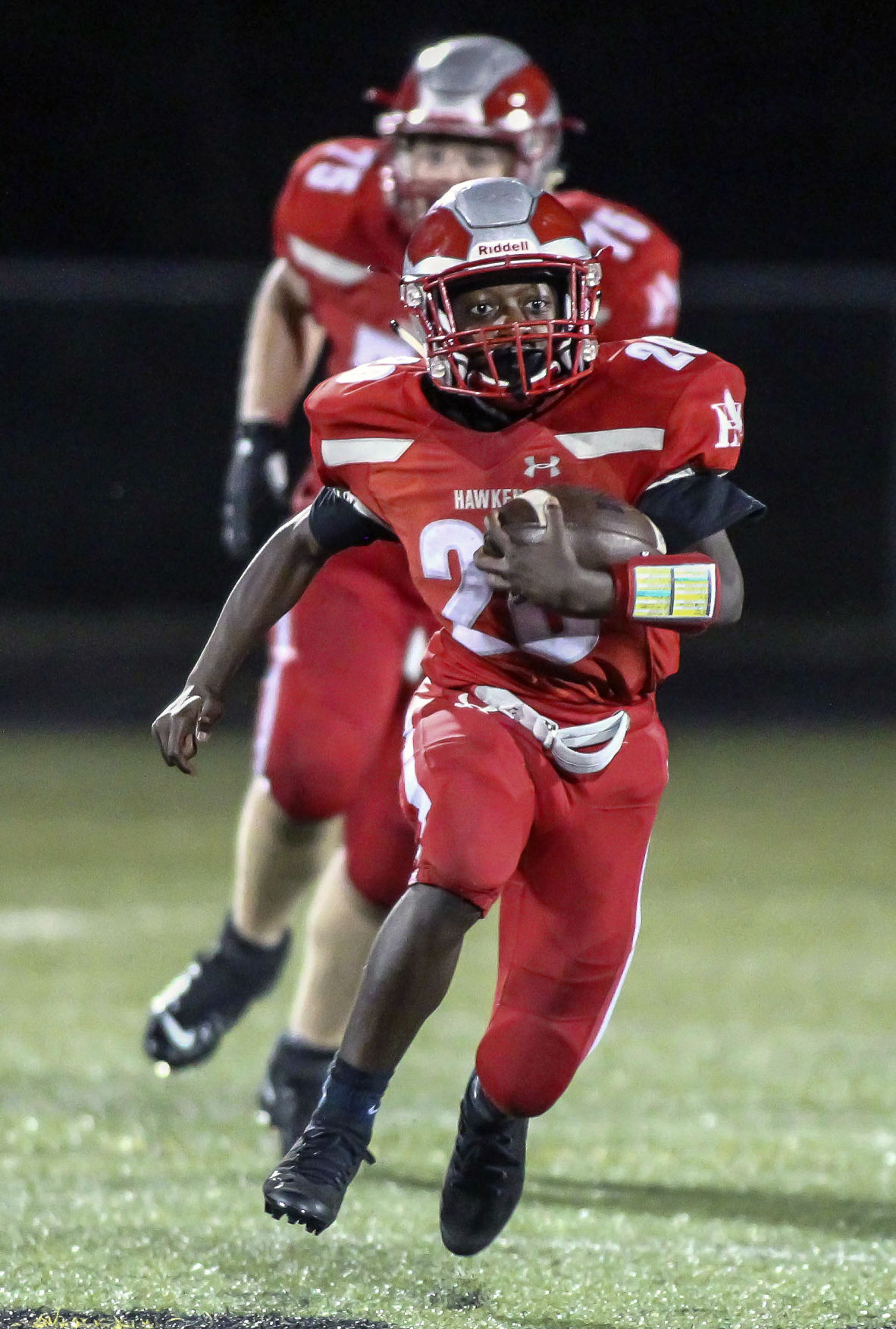 Hawken School 115-pound freshman running back Dominic Johnson busts loose on one of his six carries for 194 yards in the Hawks’ 40-14 home win against Newbury on Friday night in Chester Township.

Hawken School 115-pound freshman running back Dominic Johnson busts loose on one of his six carries for 194 yards in the Hawks’ 40-14 home win against Newbury on Friday night in Chester Township.

Behind a program-record night from 5-foot-2, 115-pound freshman running back Dominic Johnson, Hawken School ended an 11-game skid with a 40-14 thumping of Newbury during its home opener on Friday night at Walton Stadium.

It was the Hawks’ first victory since a 32-12 win against Fairport Harding in 2017, when former coach Cliff Walton was still at the helm.

After going 0-9 under new head coach Brian Stephenson last year, the Hawken gridders worked all offseason to put together a performance like they had on Friday.

“It was very good for the kids and for the program,” Stephenson said. “I’m just excited. The kids put in a lot of work over the last year, and that’s just a good stepping point for them and gives them confidence going into the rest of the season, especially for it being our home opener. So, I’m very proud of them, and it’s just something to build on.”

Robinson then dialed up 170-pound junior running back Zach Miller for a 6-yard touchdown toss and a 14-0 upper hand with 4:05 left in the opening frame.

“Knowing that Newbury was going to come out in that five-man front, we knew we were going to have to use our pass game at the start,” Stephenson said. “We were a little worried about running the ball at first. So, our goal was to come out and run plays in 20 seconds or less at the beginning of the game, just to make them a little uncomfortable and get them out of their element.”

But a high-tempo offense meant less rest for Hawken’s two-way players on defense, and it started to catch up to the Hawks in the second quarter.

“They were using ball control on offense, moving the ball, huddling up, taking their time, just pounding it, grinding down the field and running the clock out,” Stephenson said. “And they came out and hit us with an onside kick. And, unfortunately, we didn’t recover it. So, it was a good call by them and smart move to get another possession and score before the half.”

But Miller, who finished with eight carries for 72 yards and two catches for 18 yards, answered with a 1-yard touchdown run with 1:23 left in the half for a 20-14 Hawken lead at intermission.

“When our defense had a couple struggles in the first half holding them and getting off the field, we had to slow down a little bit and start running the ball,” Stephenson said. “And we found we could run the ball a little bit better than we thought we could against them. So, we wanted to slow down the clock. That way we didn’t put ourselves in a position of making a game with them.”

The Hawks put the game out of reach in the third quarter, when Robinson dialed up Johnson on a 5-yard touchdown toss with 6:10 left in the frame and when Johnson punched in a 1-yard run with 1:30 left for a 34-14 upper hand.

Johnson – again, just a 115-pound freshman – then broke loose on a 96-yard touchdown run with 6:44 remaining in the game for the eventual 40-14 final. That run tied 2006 graduate David Williams’ program mark for the longest touchdown by a Hawk. Ironic enough, Williams’ 96-yard jaunt also came against Newbury.

“We were going at pace a little bit at that point,” Stephenson said. “We huddled up. We told them, if you see something, snap the ball and get into our run game. I think Newbury had 10 guys on the field at that time, so they were missing a defensive end. So, our guys did a nice job just getting down, giving (Johnson) a seam, and he got to the secondary and took off.”

Johnson would finish the game with six carries for 194 yards and two touchdowns, as well as two catches for 10 yards and one touchdown.

“He’s very dynamic, works very hard,” Stephenson said. “Our O-line gave him some holes to take advantage of, and we had our wide receivers blocking downfield. So, it was exciting to see.”

Robinson, who did most of his damage in the first half, finished nine-of-12 passing for 109 yards, three touchdowns and no interceptions.

Overall, the Hawks outgained Newbury, 386 yards to 279 yards, and won the turnover battle, 2-0, with sophomore defensive back Ben Elenin intercepting one of the Black Knights’ four passing attempts.

“Elenin had an interception for the second week in a row,” Stephenson said. “So, that was great for him. He’s a guy that’s a bit undersized, and we know that guys are going to try to pick on him at times, but he’s tough, hangs in there, fights for that ball, and it was a great moment for him.”

Up next, Hawken will travel to take on rival Gilmour Academy (1-1) at 2 p.m. Saturday at Weber Stadium in Gates Mills.