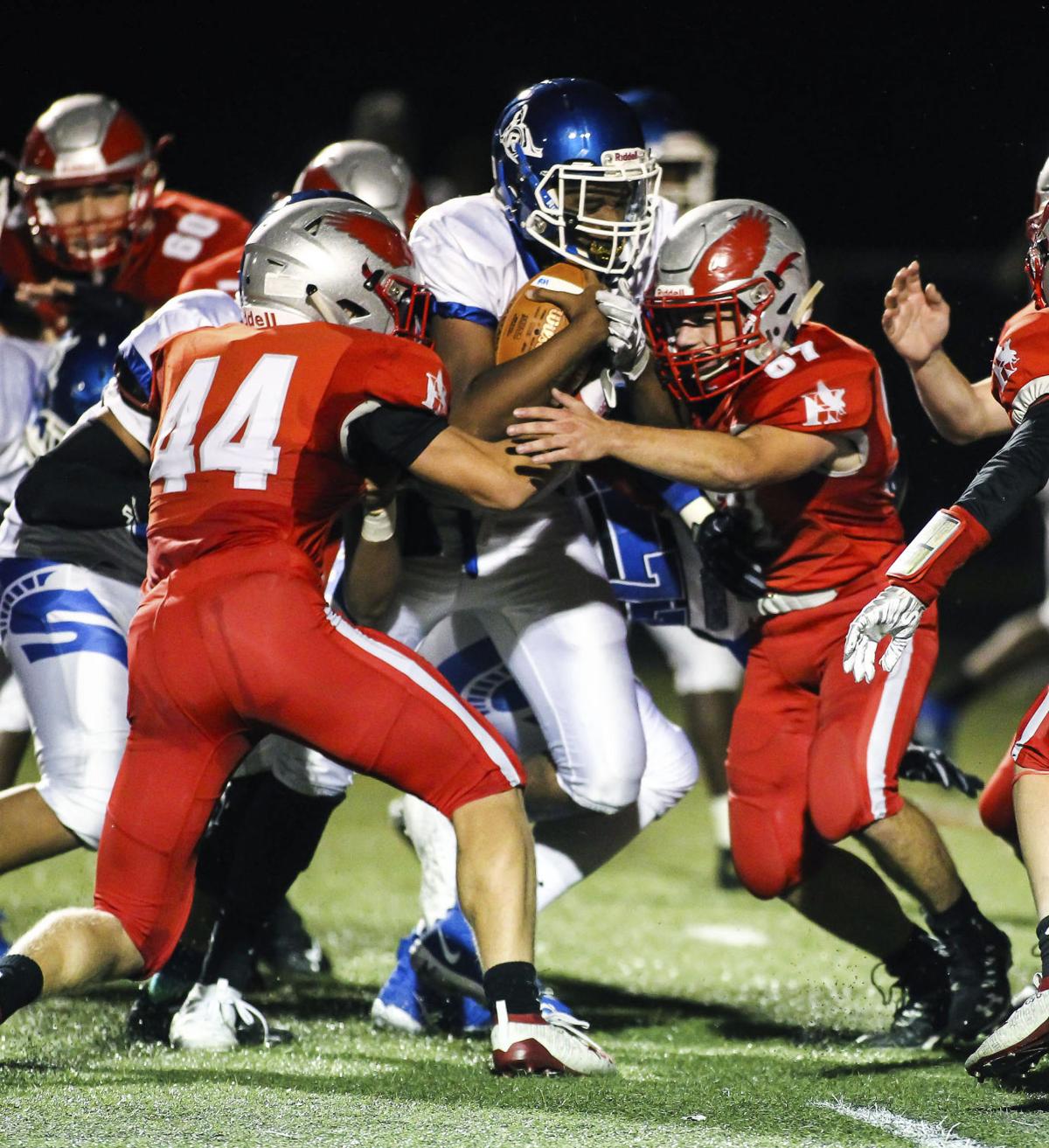 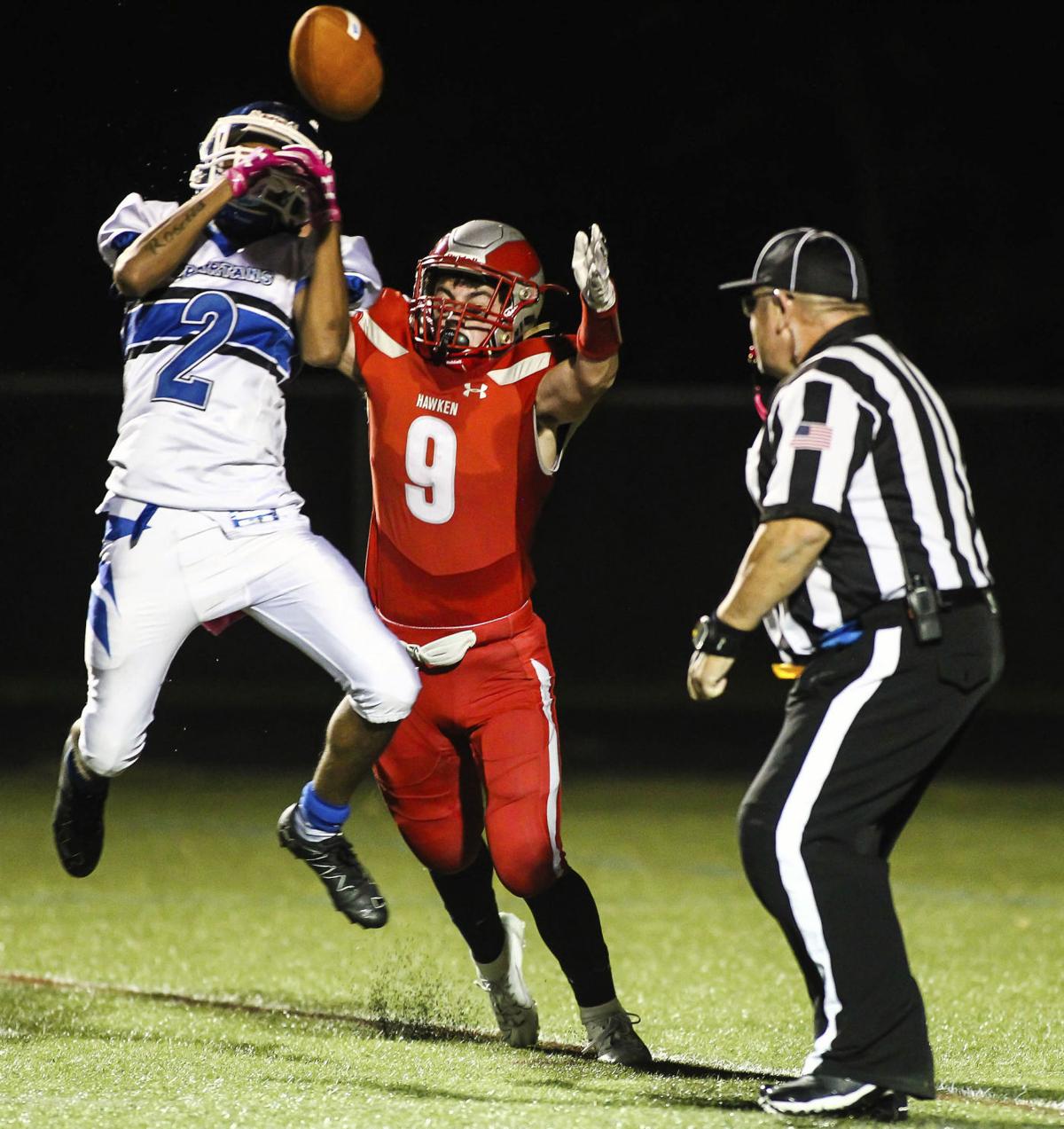 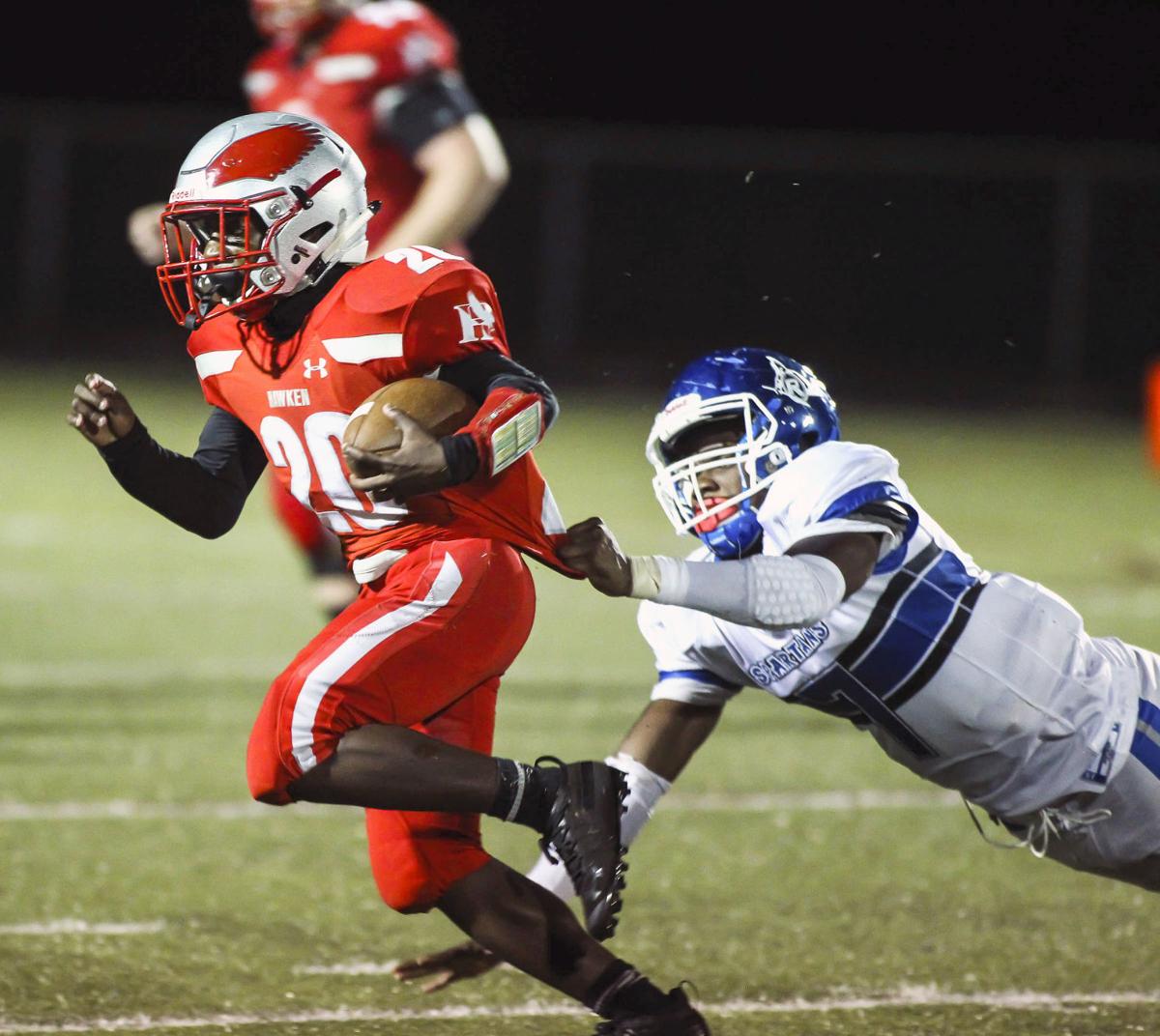 The Hawken School gridders (3-4) were clicking on all cylinders to score more points than they have in more than 20 seasons during a 63-26 home victory against Richmond Heights (0-7) on Friday night at Walton Stadium.

Since 1999, Hawken hasn’t scored more than 60 points in any given game. In addition, it was the Hawks’ most decisive victory since a 42-0 road rout of Fairport Harding in 2014.

Putting up 21 points in the first quarter against Richmond Heights, Hawken junior running back Zach Miller scored on a 1-yard rush, freshman running back Dominic Johnson scored on a 3-yard carry, and sophomore quarterback Terrence Robinson found the end zone on a 24-yard keeper for a 21-6 upper hand.

It was two scores for the Hawks and one for the Spartans in each quarter thereafter. Hawken enacted a running clocked when Miller scored his fourth touchdown of the night on a 5-yard carry for a 56-20 upper hand with 10:17 to play.

While eight of the Hawks’ nine touchdowns came on rushes, signal-caller Robinson completed 13 of 16 passes for 234 yards and had five carries for 57 yards with a pair of end-zone finds. He dialed up junior Cooper Jared for three of his completions for 69 yards.

Both football programs ran the football with near identical success, but a touchdown strike in the fourth quarter put the game on ice for University School (5-2) in a 22-13 home triumph against Youngstown Chaney (3-4) Saturday.

Prepper 6-foot-6 junior quarterback Ricky Radtke delivered a 15-yard pass over the top and on the money to 6-foot-1 senior Parker Crowley, and then Radtke ran in the two-point conversion for the 22-13 upper hand with 8:35 to play.

“That was a huge play,” US fifth-year head coach Ben Malbasa said of the final touchdown. “That was third down and about 12, and we’re inside the 20, so we want to come away with points. And we didn’t throw the ball that often as a reality in that game. We were controlling the clock.

“The one danger when you’re not throwing for volume, you don’t build that rhythm in the passing game, but, boy, he zipped a perfect throw, and Parker got interfered with but he pulled it down.”

With the flag, University was awarded the choice to add 10 yards to the spot of its ensuing kickoff or to get half the distance to the goal on the point-after-touchdown attempt, and Malbasa chose the latter to attempt the two-point conversion and make it a two-score game.

Either way, it didn’t end up making a difference in the final outcome.

“Even though it was to our advantage, I don’t think it’s a good rule,” Malbasa said of the choice. “But we got half the distance to the goal line. So, I felt like our chances of getting a yard and a half were pretty good.”

The end result went in University’s favor, but the Preppers faced a 7-0 deficit at the quarter mark, before Radtke dialed up 6-foot-4 sophomore receiver Joey Valerio on a 21-yard touchdown in the second quarter.

University 175-pound junior running back Nick Flowers then scored on a 1-yard rush in the third quarter for a 14-7 upper hand, but Chaney cut the deficit, 14-13, on a 1-yard keeper by junior quarterback Delshawn Petrosky.

Flowers finished with 22 carries for 147 yards for the Preppers.

“Both teams tried to run the ball, there’s no doubt there,” Malbasa said. “I think what might be a little different is I thought we were able to really control the tempo of the game. And normally that’s not us. Normally we want to go fast. We kind of flipped the script on them, and we were the huddle team, and we slowed the ball down and kept it out of their athletes’ hands.

“So, I thought it was certainly part of the challenge of the game for them.”

The Gilmour Academy gridders (4-3) built a 20-0 lead by halftime and rode some young guns to a 33-0 road victory against the Cleveland Central Catholic Ironmen (0-7) on Saturday afternoon at Stefanski Stadium.

The Lancers did have veterans like 165-pound senior running back Connor Krebs carrying the pigskin 17 times for 125 yards with three touchdowns and 6-foot-2 senior receiver Nate Reichard hauling in five catches for 76 yards with a touchdown.

But Gilmour also had the pleasure of 6-foot-3 freshman receiver Charlie Snelling collecting three passes for 41 yards and getting an interception on defense, 5-foot-8 freshman Tommy McCrone hauling in a reception for 15 yards and 6-foot-3, 190-pound freshman lineman Will Lazzaro picking up a sack.

“We’ve been playing a lot of freshmen, a lot of sophomores,” Gilmour fifth-year head coach Chris Kosiorek said. “That’s kind of been why we’ve been up and down, because that’s a lot on kids’ shoulders. They’re playing CYO football last year, and they’re playing varsity football this year.

“And those three guys did a great job for us, and we’re constantly trying to get everyone prepared and ready, and when they come to Gilmour they know they have an opportunity to play early. That’s kind of why we’ve had a little bit of a roller coaster.”

Gilmour Academy has been either feast or famine during its past five games, with three blowout victories and two blowout losses, but the Lancers remain in the playoff hunt with plenty of computer points left on their schedule.

Also with a standout performance against the Ironmen, Gilmour 6-foot-1 sophomore quarterback Dan Jevnikar was 10-of-15 passing for 152 yards.

“It was just some things we saw on film that we wanted to get the ball to guys a little bit quicker, because that’s one of the things we’re having issues with, is protection,” Kosiorek said. “But he had some time, and we also did some different things offensively to get the ball out of his hand a little bit quicker, and he did make some nice throws to Nate, some deep passes.”

Defensively, Gilmour forced three turnovers to help keep Central Catholic out of the end zone. In addition to freshman Snelling’s pick, older brother Michael Snelling, a 6-foot-3 junior, also had an interception and a sack, and 6-foot-2 senior Aidan Muchnicki had an interception.