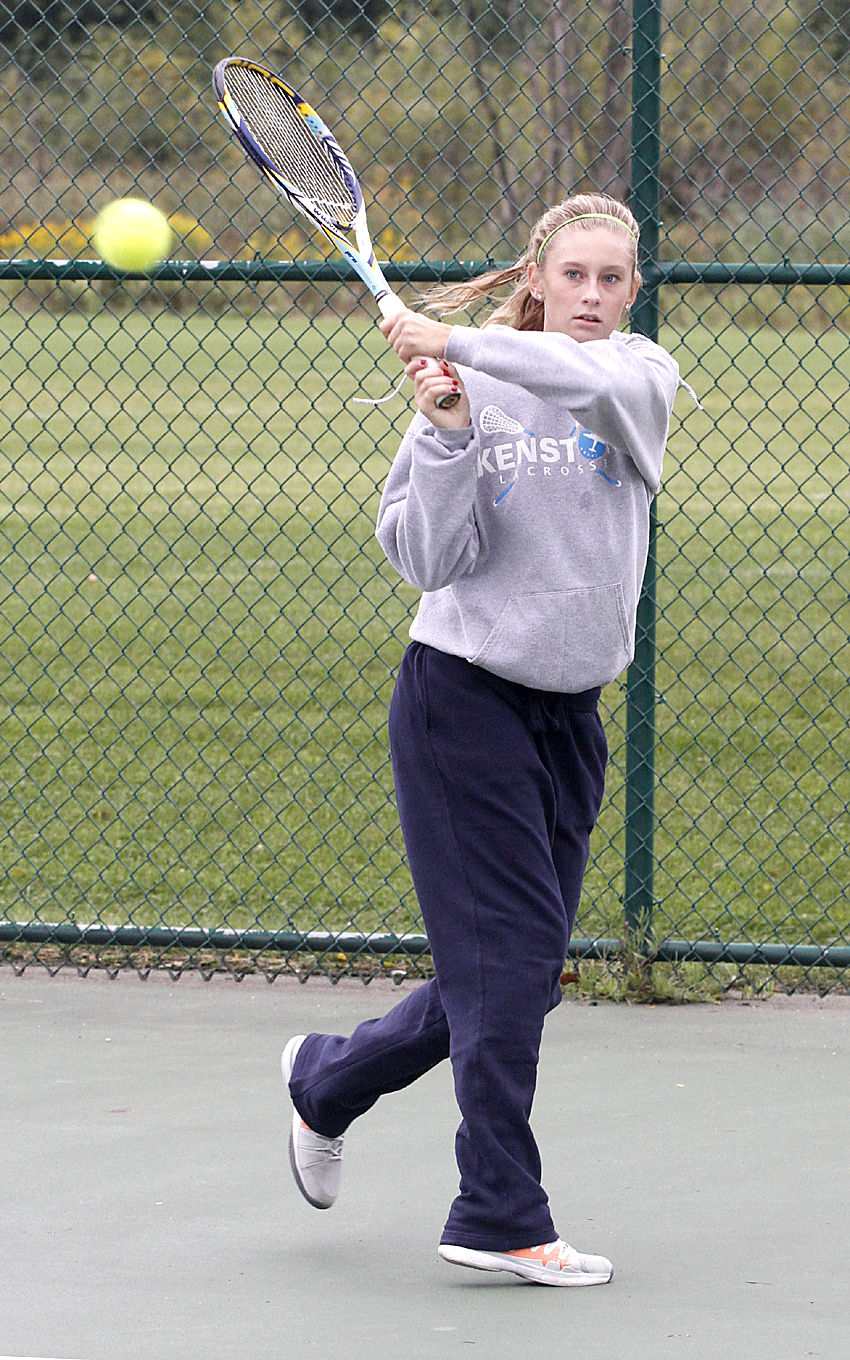 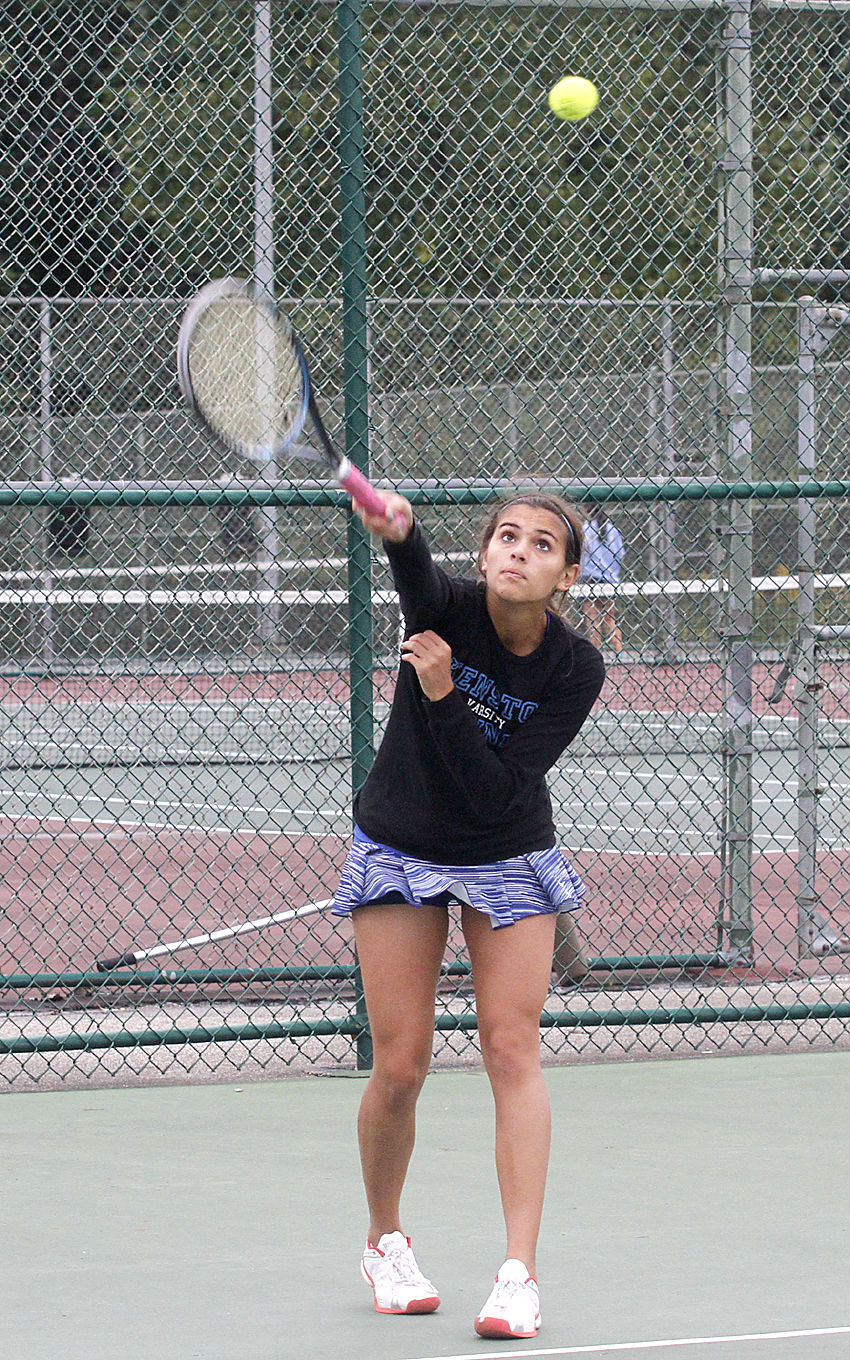 Kenston junior Nicole Doran is one of two Lady Bombers who returned to the varsity tennis courts this season. In her transition from third singles to second singles, she’s found success in key moments to propel 3-2 team victories this fall. 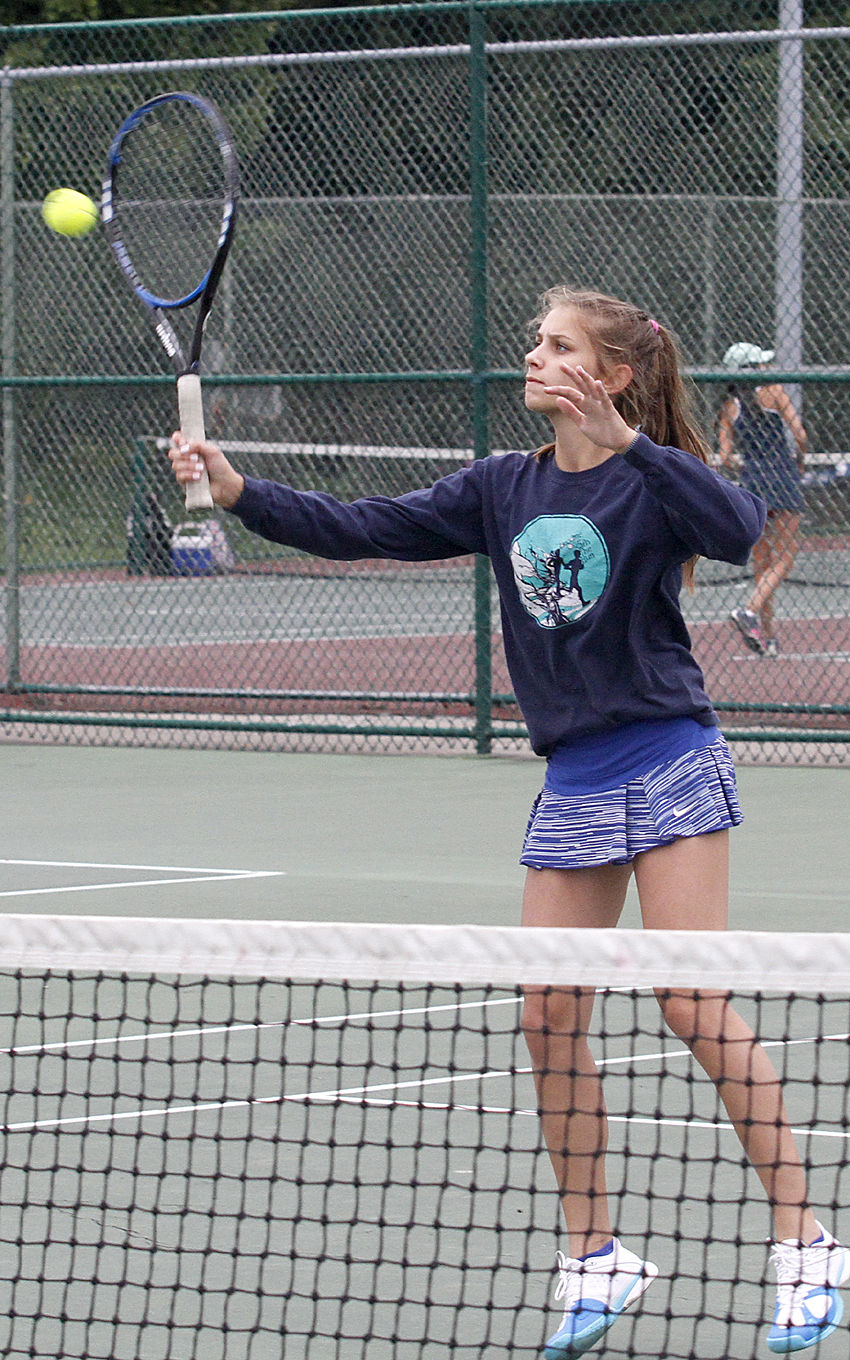 Kenston sophomore Sydney Winovich is one of five newcomers to the Lady Bombers’ varsity tennis team. She has juggled duties at third singles and second doubles this season.

Kenston junior Nicole Doran is one of two Lady Bombers who returned to the varsity tennis courts this season. In her transition from third singles to second singles, she’s found success in key moments to propel 3-2 team victories this fall.

Kenston sophomore Sydney Winovich is one of five newcomers to the Lady Bombers’ varsity tennis team. She has juggled duties at third singles and second doubles this season.

Adversities on and off the court and the addition of five new varsity players haven’t stopped the Kenston girls tennis team from promoting a winning season heading toward conference and sectional play.

Senior Tasha Birze and junior Nicole Doran returned to the courts this season to lead the Lady Bombers to an 8-5 mark, as of Tuesday, and a third-round appearance in the Ohio Tennis Coaches Association tournament.

Head coach Greg Aten, the tennis director at the Chagrin Valley Athletic Club, said he expected to have a bit more of a rebuilding year with only two girls coming back.

“We have a lot of girls moving up, but we’ve really been competitive and beaten some pretty good teams in Hudson, Solon, Mayfield and Revere and have had some nice wins,” he said. “So I’ve been really happy actually in how they’ve performed and the level of competitiveness they had with a lot of heart. To have some of your losses to Hathaway Brown and people like that, you can’t be unhappy. It’s been a good year so far.”

Three of the Lady Bombers’ losses have been to ranked teams, including No. 2 Hathaway Brown and No. 6 Orange in Division II and No. 2 Walsh Jesuit in Division I, according to the OTCA.

Winning the close matches this year – five of six 3-2 decisions – Kenston has relied on all five courts against various opponents, Aten said. Specifically against Mayfield, Doran fought through a third-set tiebreaker on the No. 2 singles court to motor the Lady Bombers’ 3-2 victory.

“It was a little rough for her in the beginning, making the transition from the third court to second,” Aten said. “But she’s done an outstanding job and got some really big wins. We were actually losing, 2-0, to Mayfield, and she was up, 5-2, in the third set, and the girl came back and went up, 6-5, on her, and she came back and won it in a tiebreaker. So she’s been a pleasant surprise on that court. She’s just a very competitive kid.”

Maintaining her role on the first singles court, Birze suffered an ankle sprain in the summer and missed two months of court time leading up to the season but has bounced back and is geared to peak come the postseason, Aten said.

Birze made Division I state doubles tournament appearances as a freshman and sophomore with 2013 graduate Mandy Marchant, and then she earned a sectional singles crown last year before concluding her season at the district tournament.

“She started a little slow coming off that injury and just wasn’t herself, but she’s been playing better every week,” Aten said of Birze. “She beat Cuyahoga Valley Christian Academy’s freshman Irene Norman, and Irene actually hadn’t lost a match up until that point, and we won that match, 3-2. So that was a good win for her.”

Joining Birze as the only other senior on the varsity team, Sarah Coughlin has jumped between third singles and first doubles the majority of the season and even second singles for a couple of matches.

During Kenston’s 4-1 OTCA victory against Solon, Coughlin took care of business on the third singles court, and then, during the Lady Bombers’ 3-2 regular-season victory against Solon last week, she teamed up with junior Savannah Sitts to get the job done on the first doubles court.

“It’s one of the things you have to do when you lose five girls off your varsity,” Aten said. “You have to be a little creative with the lineups to try to win matches and do it all within the rules. Obviously, we’re trying to figure out how to win three courts.”

A trio of sophomores also moved up the ranks to varsity this year, including Mackensie Bush, Ellen Model and Sydney Winovich.

While Winovich is versatile enough to switch back and forth between third singles and second doubles with Sitts as her partner, the chemistry between Bush and Model keeps them busy as full-time doubles associates.

“They’re both really good friends,” Aten said. “So it makes a big difference in how they have a lot of energy on the court and really pump each other up well. In that match against Mayfield, they actually won the third set, 7-5. We actually won all three of our courts in third sets that day, and so it was just a turning point in our season. Mayfield at the time was 7-4, and we were only 4-3. From then on, we really kind of ignited to having a nice little run here.”

Up next, Kenston will host the Chagrin Valley Conference tournament at 9 a.m. Saturday.