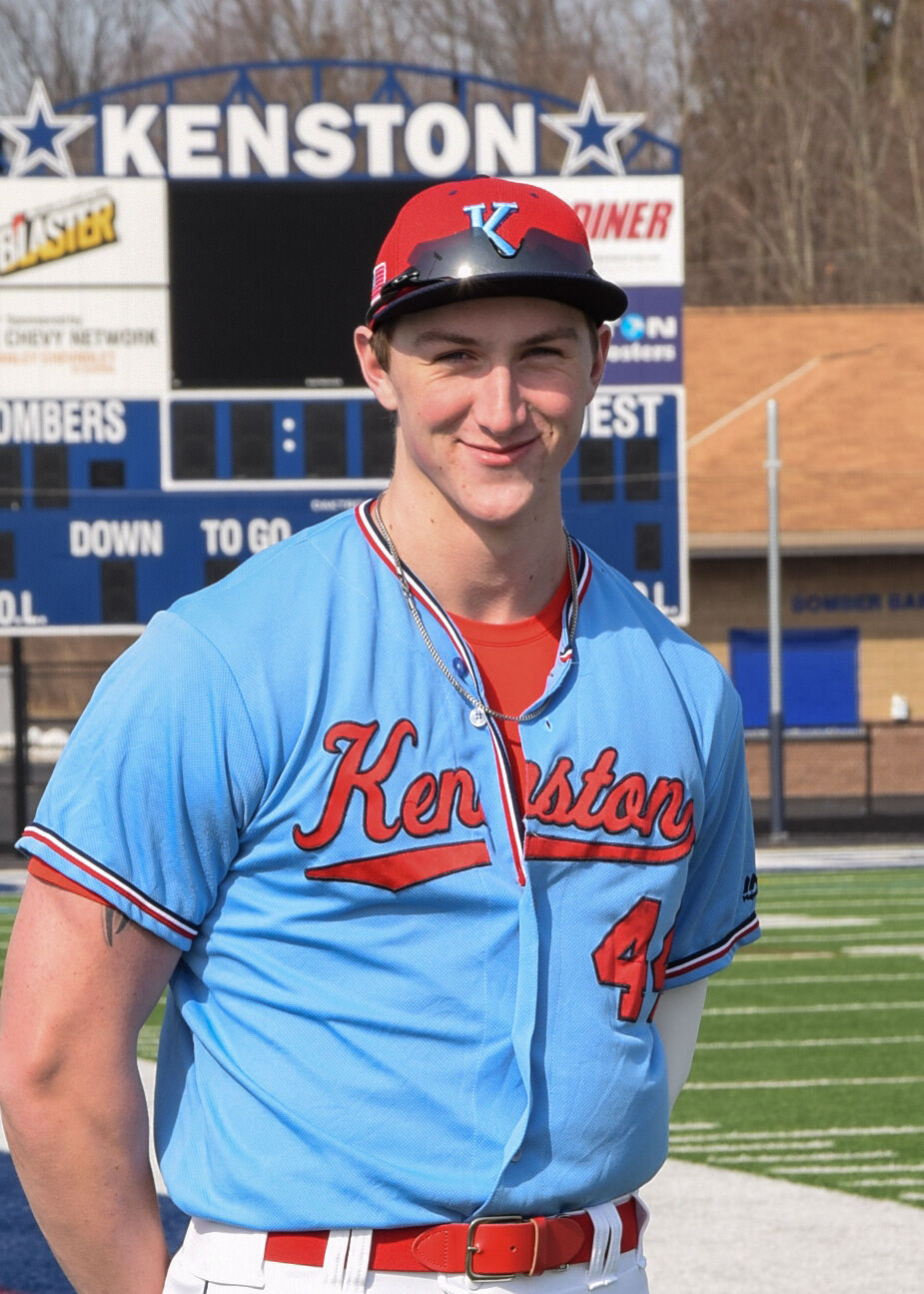 It was only one year of varsity baseball but it was one for the ages for Ryan Gilbert. The 6-foot-4 center fielder made his senior season memorable as he hit .500 in 27 games this year. 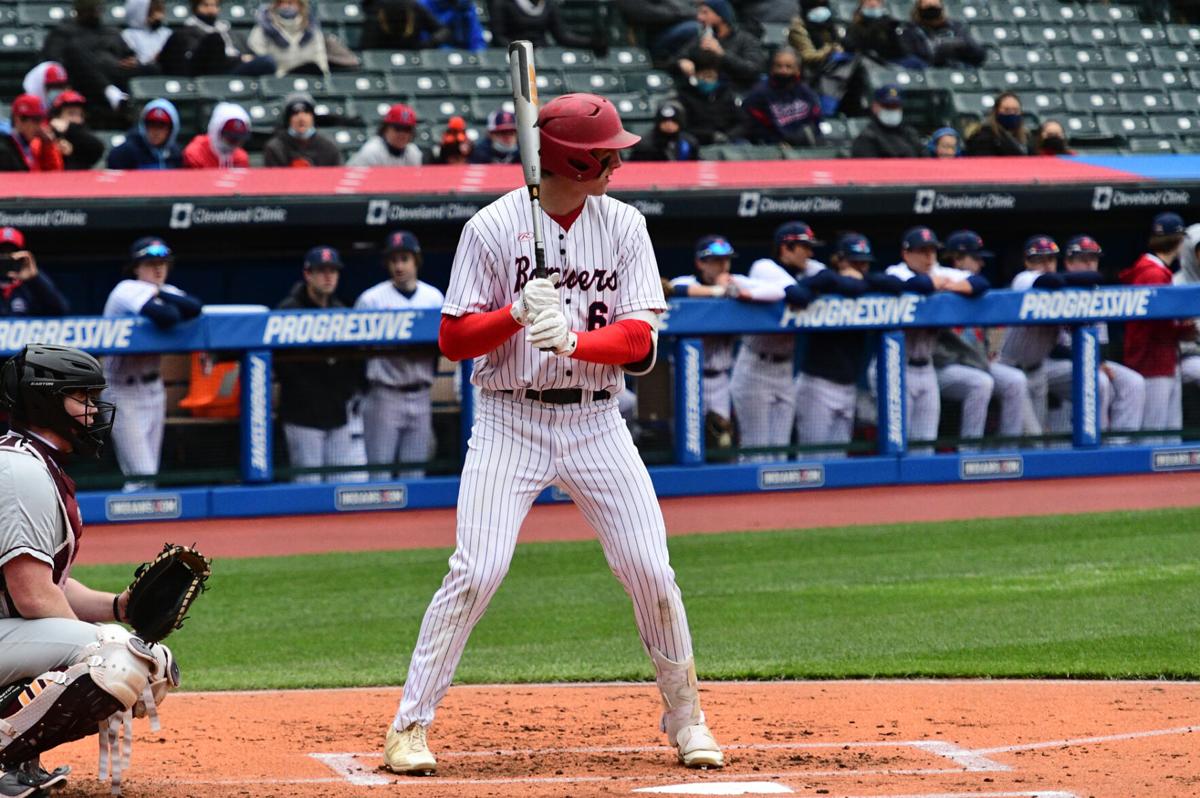 While Ryan Gilbert is currently training at a baseball camp in Indiana, he has his ears open as Major League Baseball Draft nears this weekend.

It was only one year of varsity baseball but it was one for the ages for Ryan Gilbert. The 6-foot-4 center fielder made his senior season memorable as he hit .500 in 27 games this year.

While Ryan Gilbert is currently training at a baseball camp in Indiana, he has his ears open as Major League Baseball Draft nears this weekend.

When Ryan Gilbert stepped up to the dish on May 20 in the Division I Hudson Sectionals against the Solon Comets, there was a lot riding on his shoulders. The Kenston Bombers were trailing the Solon Comets 8-7 with two outs in the bottom of the seventh inning and were on the brink of elimination.

There were options. Solon could intentionally walk Kenston’s most dangerous hitter, but that would put the tying run on base. While putting the tying run on base was not a recommended option, it would have been hard to question that decision as Gilbert was Kenston’s most dangerous hitter. But Solon senior right-hander Justin Adzema decided he wanted to pitch to Gilbert.

That proved to be a costly decision. Adzema hung a breaking ball over the heart of the plate and the Bombers’ 6-foot-4 center fielder tattooed it over the left-center field wall and Gilbert trotted around the bases for his sixth home run of the season.

Despite the electrifying home run the Bombers’ comeback fell short and lost 10-9.

Although it ended Gilbert’s season, he went out with a bang as he hit .500, while hitting six home runs, eight doubles, two triples and knocked in 21 RBIs through 27 games. The Kenston senior’s lone varsity season led to him being named the co-Western Reserve Conference Player of the Year, becoming the first Bombers’ baseball player to earn that honor.

“I played a bunch of sports growing up and baseball was one of them,” noted Gilbert. “I enjoyed the whole team aspect of being around different people and I think I just enjoyed baseball the most out of all them and it was probably the one I was best at.”

He took the next step when he was 9 by joining a travel baseball team. Despite travel ball being comprised of much tougher competition it did not faze Gilbert. By that point, baseball had become a huge part of his life and was practicing almost every day so he was more than ready for this new challenge.

When Gilbert tried out for the varsity baseball team his freshman year he had already made a name for himself. Ford said he could tell he was a very talented baseball player. The 12-year Kenston coach got a good glimpse of Gilbert’s potential when he hit an inside-the-park-home run in the Bombers’ annual Myrtle Beach spring showcase.

Gilbert would have played on the junior varsity team that year but his freshman season came to an early end because of an elbow injury. Bad luck continued to plague him as his sophomore season was hampered because of a shoulder injury. Despite losing out on his first two years of high school baseball, Gilbert continued to harness his skill set by playing in travel leagues over the summer.

Gilbert said playing baseball at the next level was something he always dreamed of but was unsure if that was just a pipe dream. His attitude changed when some of his teammates from the summer league started to land athletic scholarship offers and realized that playing college ball was actually an achievable goal.

“When a group of my teammates started to make something out of their sports career and a lot of them were playing in college,” explained Gilbert. “I realized could play in college too so I just focused on baseball. I just had to dedicate more time towards it. Time management was a big one so I had to sacrifice some stuff.”

One thing that changed was Gilbert. Ford said when Gilbert tried out for the team his freshman season he was a tall kid but did not have much muscle on his frame. Once he decided he wanted to push himself to play at a higher level in college he began spending more time in the weight room. When he showed up for tryouts his junior year Ford emphasized what a different player Gilbert was compared to the skinny freshman in 2018.

“It was a massive transformation,” chuckled Ford. “He always had that frame to be a big dude but he was always tall and skinny. When he came back his junior year he was already 220 and 6-foot-4 and nothing but muscle.”

Ford said he could already see big things were coming for Gilbert for his junior year but the pandemic put the kibosh on those plans. Once again Gilbert lost out on another high school season so he put his focus on playing summer ball. He spent that summer playing all across the United States on several different teams and Ford said it made a huge difference.

“He played a full summer season all over the United States,” said Ford. “He played on some pretty spectacular teams all over the place and he batted clean-up on all those teams and he got some serious looks and really good experience. On senior year he was ready to go.”

During the summer of 2020 Gilbert’s hard work paid off as he started receiving multiple athletic scholarships offers. He said one of the most exciting offers he received was from Indiana University. While playing in the Big Ten was not a make it or break it deal Gilbert admitted he was excited at the prospect.

“I think I just wanted to go to a good program in general,” said Gilbert. “The Big Ten is where I happened to end up so that is where I feel like I want to play. I took an unofficial visit before I made my commitment. I liked the campus. I liked the feel of the school too. It had a good environment so I think after that I was 100% Indiana. I committed the first week of August my senior year.”

Having an athletic scholarship to play in college meant everything to Gilbert. However, the only thing that could have made it better was becoming a hot commodity for the upcoming Major League Baseball Draft. It just so happened that he caught the eye of several major league scouts in fall ball.

“At first they were kind of just there for other people and I was kind of there,” said Gilbert. “But then I caught their attention and then they started coming for me so I think I eased into it so it wasn’t too overwhelming.”

Although he had a scholarship offer, there was still a lot riding on this season. It had been difficult for scouts to come out and see him during the fall because of the pandemic so Gilbert said he knew he would have a lot of eyes on him in his senior year at Kenston.

Throughout Gilbert’s career he had always batted clean-up. Ford said he had a chat with the Bombers’ senior before the start of the season and explained that he believed Gilbert would be better suited hitting leadoff as he had the feeling opposing pitchers would not want much to do with him.

Gilbert was not sold on that idea but after his first game, where he walked in all three of his at-bats, he had a change of heart.

“He then called me up after the game and said coach I’ll bat leadoff the next game,” said Ford. “So we batted him lead off the whole rest of the season and it was pretty successful and we had a good time with him.”

It turned out to be a wise decision on Gilbert’s part as it forced opposing pitchers to actually have to deal with him and he made them pay for any mistake and became a key cog in the Kenston offense.

Gilbert recently moved to Indiana and is currently playing in a summer league an hour from the university. He still has his ear to the ground about the MLB Draft and if the chips fall in his favor, he will become the first Bomber to get a shot at the majors since Pat Porter was drafted by the Houston Astros in the 15th round of the 2015 draft.