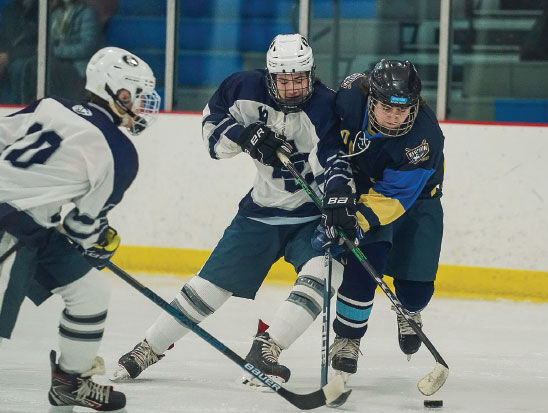 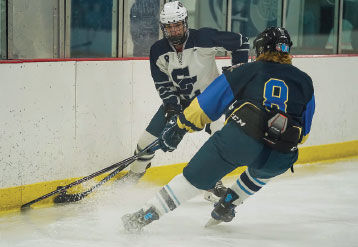 Solon sophomore forward Aidan Davis (left) picks a puck off the dasher against Kenston freshman forward Will Fromson during the Ice Comets’ 5-2 victory on Saturday in Gates Mills. 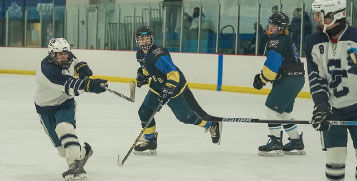 Solon senior winger Ian Carlisle (left) unleashes a slap shop during his two-goal performance in the Comets’ 5-2 victory against Kenston. 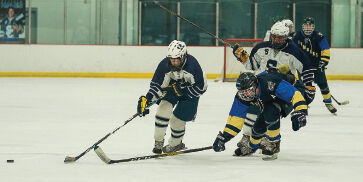 Solon sophomore forward Aidan Davis (left) picks a puck off the dasher against Kenston freshman forward Will Fromson during the Ice Comets’ 5-2 victory on Saturday in Gates Mills.

Solon senior winger Ian Carlisle (left) unleashes a slap shop during his two-goal performance in the Comets’ 5-2 victory against Kenston.

The comfort of a 3-0 lead was no more for the Solon Icemen, who were hosting Kenston in a season opener during their annual holiday tournament on Saturday morning at Gilmour Academy’s Stefanski Ice Center in Gates Mills.

Kenston freshman forward Troy Krahe picked the puck off the back boards, skated to the left circle and lit the lamp on a near-post tally he squeezed past Solon junior goalie Devin Apanasewicz’s stick side. Junior forward Patrick Benjamin had the apple.

Krahe’s lamplighter was Kenston’s second tally in two minutes, as the Ice Bombers broke the silence of their offensive slumber to cut the deficit, 3-2, with eight minutes to play. After getting outshot, 22-10, through two periods, the Kenston puck-handlers had all the momentum with an 8-4 advantage in shots on goal to open the third period.

The Kenston Icemen were returning on the heels of a 12-21 campaign that ended with a 4-2 loss against Walsh Jesuit in the second round of the playoffs under former head coach Tom Fritsche, who accumulated a 64-38-1 record during his three seasons at the helm.

Kenston competed in the upper Red Division of the Greater Cleveland High School Hockey League during that run but graduated six seniors, including netminder Jason Hildebran, who broke an Ohio High School Athletic Association state record with 1,335 saves last season. He finished his career with 3,303 saves, which is second best in OHSAA history.

Solon, meanwhile, was returning on the heels of a 10-13-1 campaign with second-year head coach Frank Nagy back at the helm – a 2015 graduate of the program who played goalie. Nagy was unavailable for comment for this article.

While Solon lost a 6-0 game against a superior Kenston program last season, both Solon and Kenston are now in the White South Division of the GCHSHL, along with Aurora, Kent Roosevelt, Orange and Western Reserve Academy.

The Comets had put in two periods of superior play against Kenston on Saturday, specifically through the goal scoring of their starting line: junior center Christo Wu and senior wingmen Ian Carlisle and Daniel Thomas.

In fact, just 10 seconds after the initial puck drop on Saturday, Carlisle collected a rebound off the back boards and buried a near-side finish past Kenston sophomore goalie Nate Linsz’s stick side.

Two minutes later, Solon had its lone power play of the game but could not capitalize.

With 3:10 left in the opening frame, Solon’s Wu went the length of the ice and unleashed a righty wrister from the right side of the slot that went upper 90s on the far post, past Linsz’s glove side, for a 2-0 upper hand at the first intermission. The Comets outshot Kenston, 13-5, in that period.

Solon took a 3-0 lead when junior defenseman Zach Nathanson intercepted the rubber on the left boards and took a lefty wrister from the circle that hit off Linsz’s near-side leg pad, before Thomas collected and finished off the rebound with 5:56 to go in the second period.

Nathanson was joined by sophomore Noah Prins to make up the Comets’ starting defense, while senior Matt Hales and freshman Ben Kehrier also steered pucks out of Solon’s defensive zone to shut Kenston out through two periods.

The Comets were one goal away from really breaking the game open, but Kenston defenseman Paxton Phillips had other ideas.

The Bombers’ lone senior accelerated from behind his own cage, flew by one Comet defender for a two-on-one rush with junior teammate Jackson Keen. Phillips then tapped the puck around a second defender, to himself, before slotting a lower, left tally past Apanasewicz’s stick side to get his team on the board, 3-1, with 10:04 to play.

Two minutes later is when Bomber frosh Krahe buried that 3-2 tally, as the momentum pendulum was in full swing in Kenston’s favor.

But Comet center Wu stole it back on a righty wrister from the middle of the slot, off a feed from behind the cage that he finished lower right to reclaim a two-goal cushion, 4-2, with 5:57 to play.

Solon’s Carlisle then picked up a rim puck off the yellow dasher that sophomore center Cooper Frazier whipped around his own cage to avoid the Bombers’ forecheck. Carlisle took a quick turn into the offensive circle and ripped a lefty slap shot that found the back of the net with 4:05 to play for the eventual 5-2 Comet victory.

Kenston had its lone power play of the game with 3:18 remaining but couldn’t make anything of it.

The Bombers went on to lose to Olmsted Falls, 7-1, during their second game on Saturday, before picking up an 8-4 victory against North Olmsted on Sunday, which was Kenston first-year head coach Tom Moores’ first victory at the helm. Both Olmsted Falls and North Olmsted are in the White North of the GCHSHL.

Solon, meanwhile, lost an 8-5 battle against North Olmsted in its second game on Saturday, before tying Olmsted Falls, 4-4, on Sunday morning. The Comets then played Olmsted Falls again in the championship game on Sunday evening and lost a 4-2 decision to finish tournament runners-up.