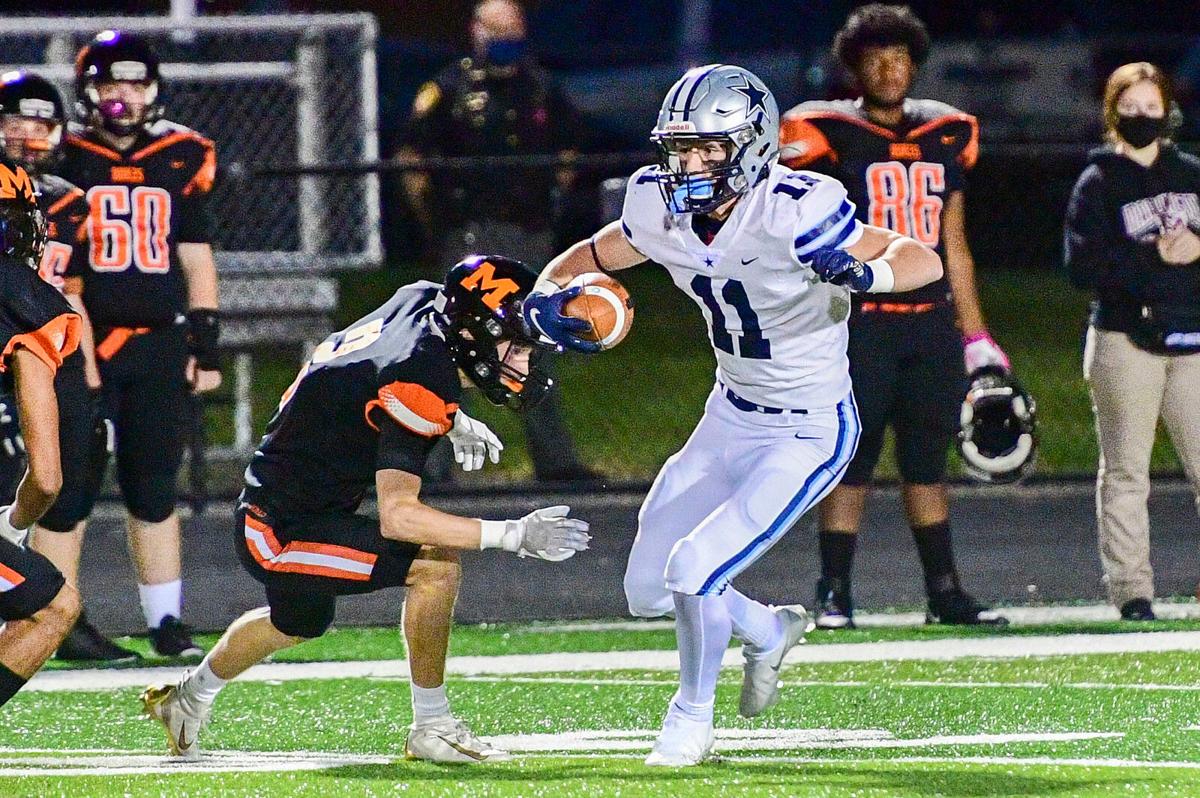 Kenston 6-foot senior receiver JP Germano slips by a Marlington defender during one of his eight receptions for 255 yards and three touchdowns in the Bombers’ road playoff victory, 41-7, on Friday night in Alliance. 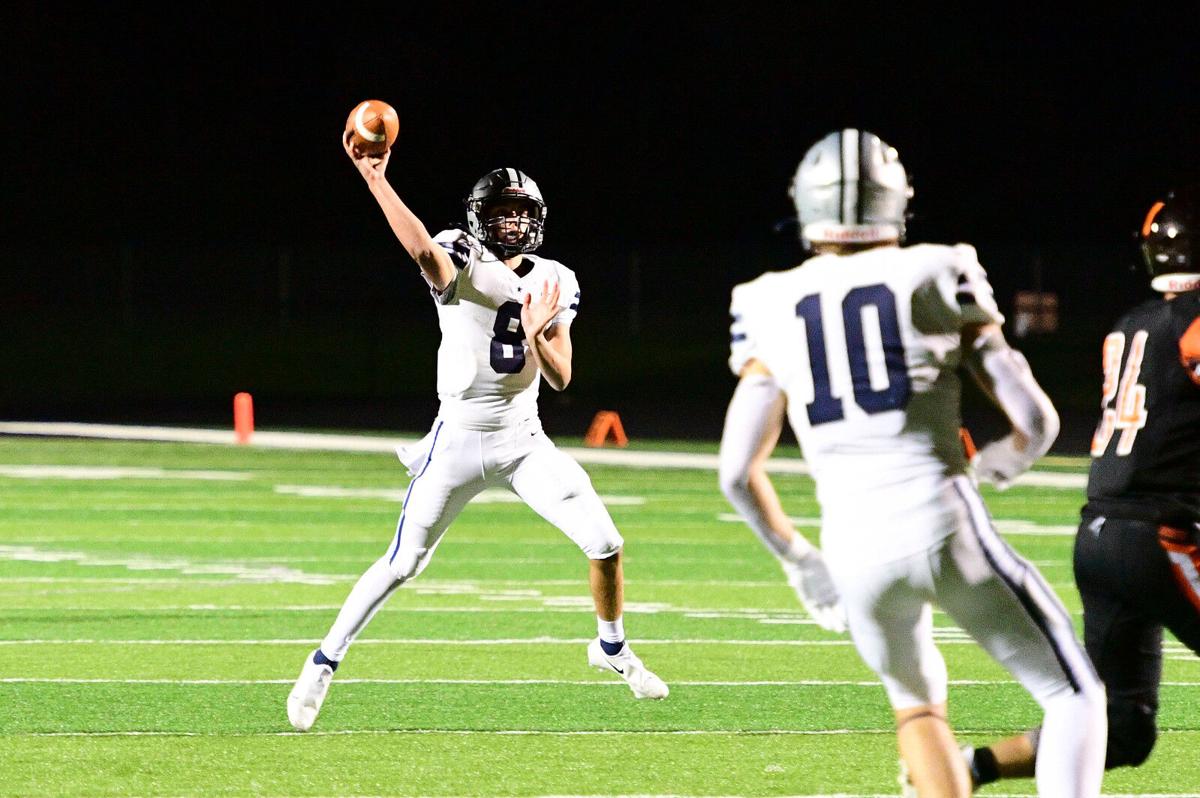 Kenston sophomore quarterback Nikko Georgiou tosses one of his 12 completions for 301 yards and five touchdowns in the Bombers’ 41-7 playoff road rout of Marlington on Friday night in Alliance.

Kenston 6-foot senior receiver JP Germano slips by a Marlington defender during one of his eight receptions for 255 yards and three touchdowns in the Bombers’ road playoff victory, 41-7, on Friday night in Alliance.

Kenston sophomore quarterback Nikko Georgiou tosses one of his 12 completions for 301 yards and five touchdowns in the Bombers’ 41-7 playoff road rout of Marlington on Friday night in Alliance.

A lucky bounce on the opening kickoff and a lucky bobble on the first play of the game had the Kenston gridders (3-2) taking a 7-0 upper hand just 25 seconds into a road playoff game Friday night in Alliance.

But it was going to take more than a little bit of luck for the No. 19-seed Bombers to defeat the No. 14-seed Marlington Dukes (3-3) during a Division III, Region 9 postseason opener, or at least that was the notion from the 27 coaches in the region who voted the boys from Stark County as the clear favorites.

Behind program-record performances from 5-foot-11 sophomore quarterback Nikko Georgiou and 6-foot junior receiver JP Germano, Kenston made a fool of both the voters and of Marlington in a 41-7 road routing to advance.

“Going in we thought it was going to be a close game,” Kenston ninth-year head coach Jeff Grubich said. “Unfortunately, Marlington lost their starting quarterback. I hope that kid is doing well. But I’ve got to give credit to our kids’ effort. They maxed out the entire time. They took coaching all week, they worked hard, so they earned it. They earned it.”

Kenston returned the opening kickoff and appeared to be stopped at its own 30-yard line, but the pigskin spilled out on a forward fumble, and Bomber 205-pound junior Aiden Vanderbilt, who was leading a blocking effort, recovered it for an additional 50 yards to set his offense up on the cusp of the red zone.

On the first snap, Georgiou targeted Germano, who appeared to lose the reception off his fingertips, but the leather bounced off senior teammate Colin McCleery and came back to him for a 20-yard touchdown and that “lucky” 7-0 lead for the Bombers.

“I actually bobbled it myself, and it actually bounced off Colin McCleery’s back, and then I got it back,” Germano said. “It was a pretty goofy one. It was a weird way to start it off, for sure.”

Kenston’s defense and special teams turned up, first blocking a 22-yard field-goal attempt by the Dukes and then turning them over on downs at the 9-yard line later in the opening stanza.

Meanwhile, Georgiou redialed Germano for a 59-yard touchdown toss and a 14-0 lead at the quarter mark. Marlington was packing the box to take away the Bombers’ run game, but Georgiou capitalized on the aerial attack.

“Early on, they were really bringing a lot of guys just to bring some pressure,” Georgiou said. “There were a couple of plays where I just got the ball out quick, and (Germano) just made some moves and broke away with some long ones. There were some where the offensive line gave me just enough time to hit him deep, and, again, he just caught it and took it away.”

Kenston’s defense stood tall again to open the second quarter, this time with a fourth-down stop to take over possession at its own 15-yard line, allowing the Bombers’ offense to flip the field with a punt.

Later in the second stanza, Georgiou redialed Germano for an 86-yard touchdown toss and a 21-0 Bomber lead at intermission.

“It was a designed post, and then, after that, there was no other corner there to stop me, so I just got going,” Germano said. “I think that was definitely a momentum changer, for sure, because that got our guys all going. After that, we were just clicking from there.”

While Marglington did move the pigskin for 17 first downs, passing for 143 yards and rushing 42 times for 128 yards, the Bombers buckled down when they needed to.

Kenston forced another turnover on downs to open the third quarter and then stopped Marlington’s red-zone offense again in the fourth quarter. The Dukes were zero-of-four on fourth downs for the game.

“Our defensive coaching staff does a great job talking about you bend but you don’t break, and we were able to limit the big plays, and those kids maxed out on the defensive side of the ball,” Grubich said. “That’s why we got the results we got. I mean, they were coached up all week, and they went out, and they executed.”

The only touchdown Kenston surrendered came after a 65-yard kickoff return by the Dukes midway through the third quarter. But the Bombers owned a 34-7 upper hand at the end of that frame thanks to a 10-yard touchdown catch by McCleery and a 23-yard touchdown reception by 6-foot-6 junior tight end Ryan Miller.

That was McCleery’s second reception this season and first varsity touchdown.

“Colin is a team player, and he does what he’s coached to do, and we knew he was isolated man-to-man, and we knew he was going to run the right route at the right depth,” Grubich said. “And Nikko knew that, and Nikko threw a strike, and Colin was exactly where he needed to be for another touchdown.”

Kenston put the scoring to bed in the fourth quarter, when Georgiou threw a backward pass to 205-pound senior running back Stanley Sell, who had room on the outside for an 8-yard touchdown run for the 41-7 final.

While the play wasn’t considered a passing touchdown, Georgiou still finished the night with five end-zone tosses on 12-of-23 passing for 301 yards.

Kenston 2020 graduate Jon Tomcufcik, who started three years with a state title while he rewrote the Bomber record book, only had four touchdown tosses in a single game – he did it in a 56-28 victory against Riverside in 2017 and then again in a 50-12 victory against Brush in 2019.

“Last year, learning from Jonny just really, really helped me out,” Georgiou said. “So, I’ve got to give him some props for teaching me all that.”

Germano, meanwhile, finished Friday night with eight catches for a program-record 255 yards receiving. He was just 5 yards shy of cracking the Ohio High School Athletic Association record book, which keeps track of players who have 260 yards receiving or more in a game. Only 43 gridders in Ohio have eclipsed that benchmark.

Germano did eclipse 2020 Kenston graduate Tyler Mintz, who had a career-high 231 yards receiving against Brush in 2019.

“Me and Tyler have always been bros,” Germano said. “He’s always been like a role model to me. He’s been pushing me ever since I was a youngin’. I came in there as a sophomore, and I just looked up to him. He worked with me, and I can shove this one in his face a little bit and have a laugh with him. It was fun.”

Up next, Kenston will hit the road to take on region No. 3 seed and state-ranked Canfield (6-0) at 7 p.m. Friday in Mahoning County.