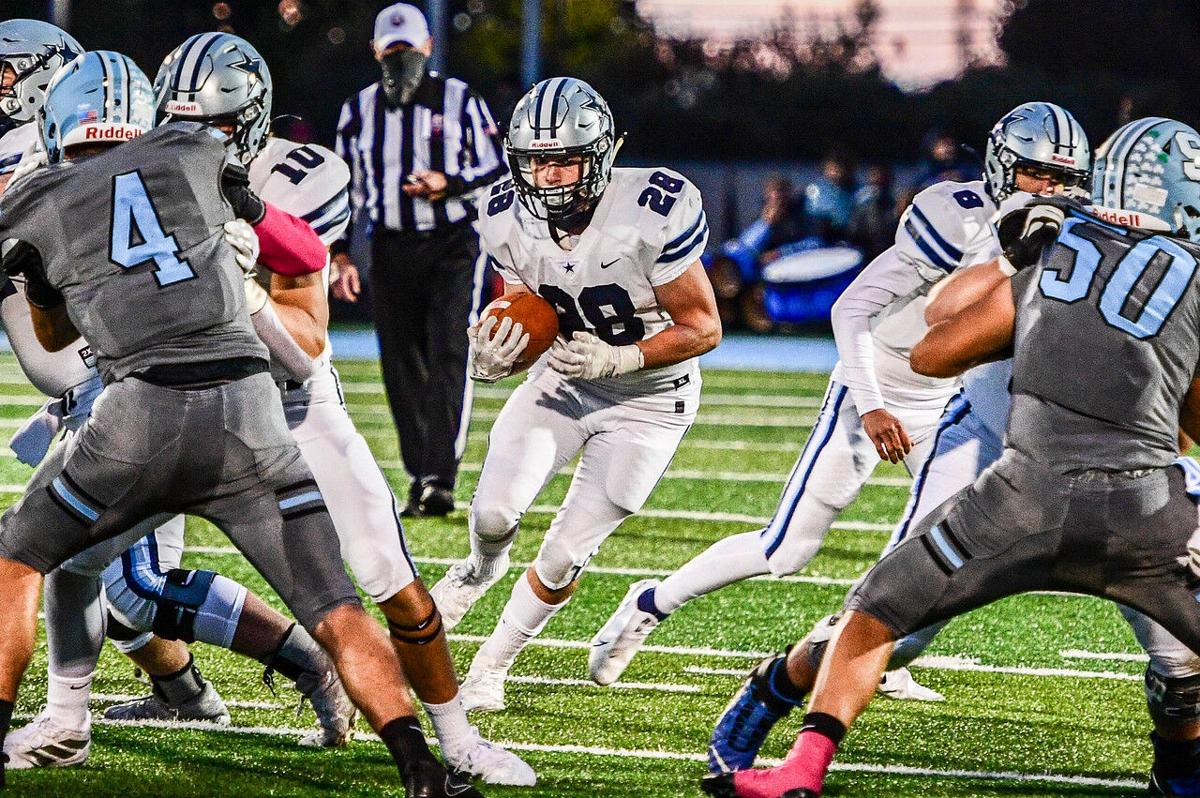 Kenston 205-pound senior running back Stanley Sell (middle) finds the parted Red Sea during one of his 35 carries for 135 yards in the Bombers’ 33-30 road victory against Western Reserve Conference foe Willoughby South on Friday night at Harry E. Winters Stadium. 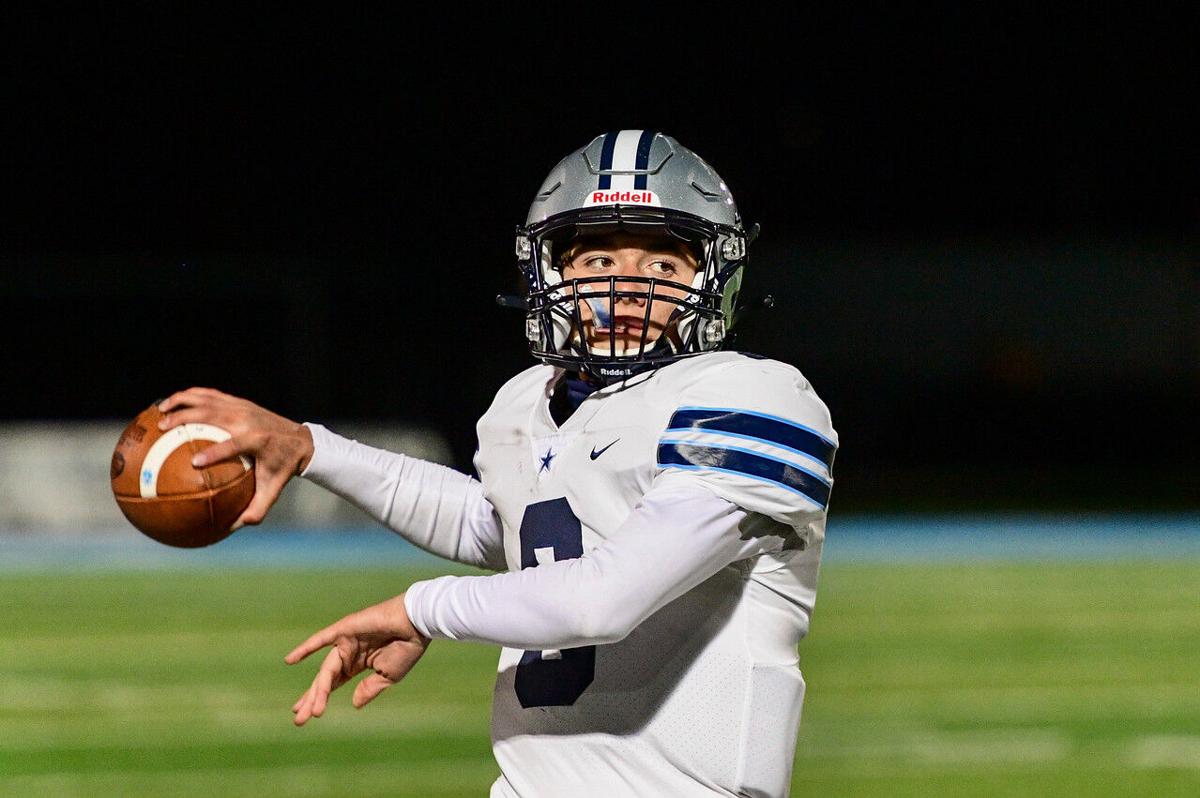 Kenston 5-foot-11 sophomore quarterback Nikko Georgiou cocks his cannon during his 16-of-30 passing performance for 215 yards and two touchdowns in the Bombers’ 33-30 road victory against Willoughby South on Friday.

Kenston 205-pound senior running back Stanley Sell (middle) finds the parted Red Sea during one of his 35 carries for 135 yards in the Bombers’ 33-30 road victory against Western Reserve Conference foe Willoughby South on Friday night at Harry E. Winters Stadium.

Kenston 5-foot-11 sophomore quarterback Nikko Georgiou cocks his cannon during his 16-of-30 passing performance for 215 yards and two touchdowns in the Bombers’ 33-30 road victory against Willoughby South on Friday.

In the meantime, the host Willoughby South Rebels (2-4) put 17 unanswered points on the board for a two-possession lead in a Western Reserve Conference clash on Friday night at Harry E. Winters Stadium.

Kenston (2-2) was perhaps trying to knock off the dust when it came to finishing drives, after going two weeks between games because Orrville canceled on the Bombers the previous Friday.

“Everybody knows we have a young team,” Kenston ninth-year head coach Jeff Grubich said. “And I would have much preferred to play Orrville and gotten these guys some more reps. But I can’t be more happy by the way the kids responded and grinded through it.”

Although Kenston had surrendered 17 points, including a 48-yard touchdown run by sophomore Tyrone Singleton, the Bombers had forced three straight South punts as time dwindled in the third quarter.

Two plays after the latest punt return, Kenston sophomore quarterback Nikko Georgiou dialed up junior receiver Carson Rivera-Gebeau for a 68-yard touchdown, and the Bombers were back in business, 17-13, with 11 seconds to play in the frame.

“That was a definite momentum switcher,” Grubich said. “Carson is one of those kids that shows up every day and does all the work, and that showed. He’s a kid that was playing both ways, and he’s on every special team. So, it’s a huge credit to the time he’s put in.

“We’ve always had a saying at Kenston: Hard work pays off. You put the time in and do the right work the right way, and it’s going to pay off. If you come up and just go through the motions, people are going to see it. If there’s one thing about football, Friday nights don’t lie.”

Kenston 230-pound senior Anthony Valocchi then recovered a Rebel fumble on the ensuing kickoff, and the Bombers’ offense went back to work, driving 44 yards down to the 16-yard line. But a fourth-and-five pass was intercepted by South with 10:58 left in the game.

The chaos ensued in Kenston’s favor down the stretch.

After losing the interception, Kenston got the leather right back when 210-pound junior linebacker Garrett Uhlir recovered a fumble and returned it 38 yards to the 1-yard line. Sell punched in the touchdown for a 20-17 Bomber lead with 10:42 to play.

Up next, 180-pound junior linebacker Braden Krupp came up with a strip sack on South sophomore quarterback Colin Quinlan and returned it 44 yards down to the Rebel 3-yard line. Sell punched in another touchdown for a 26-17 Bomber lead with 8:28 to play.

Sell would finish the night with 35 carries for 135 yards with three touchdowns, along with two catches for 15 yards.

“We emphasize takeaways with the kids,” Grubich said about three fumble recoveries in a matter of three minutes, 32 seconds.

“We always tell them to get that ball out,” he said. “And they responded, and they executed in the game what we practice. So, you’ve got to give credit to those defensive coaches and those players over there. They kept us in that game and kept us battling, and the offense was able to respond.”

But the Rebels weren’t going away anytime soon.

Kenston’s young bucks put their two-minute offense into effect and executed with four explosion plays, including a 16-yard reception by Rivera-Gebeau, a 25-yard reception by 6-foot junior JP Germano, a 12-yard carry by Sell and an 11-yard reception by Germano down to the 8-yard line. Germano had himself a night with seven catches for 77 yards.

Then, on fourth-and-goal from the 4-yard line, Georgiou made a play with his feet and delivered a beauty to 6-foot-6 junior tight end Ryan Miller for a touchdown. The Bombers retook their lead, 33-30, with 1:48 to play.

“They were just steady and calm with confidence,” Grubich said of his offense. “They knew they could execute. They just had to do their jobs. And that’s a credit to how hard these kids have been working over all these months to get the opportunity to compete. The coaches put them in good positions, and they were able to execute.

“So, I’m really, really freaking proud of what they did.”

South still had an opportunity, but not much of one without an aerial attack. The Rebels threw four straight incompletions, and Kenston kneeled out the 33-30 victory.

Overall, South outgained Kenston, 383 yards to 358 yards, but the Rebels had zero completed passes on 10 attempts.

Kenston’s Georgiou finished 16-of-30 passing for 215 yards with a pair of touchdowns.

Up next, the No. 19-seeded Bombers will open the Division III, Region 9 playoffs on the road against No. 14-seed Alliance Marlington (3-2) at 7 p.m. Friday at Duke Stadium in Stark County.