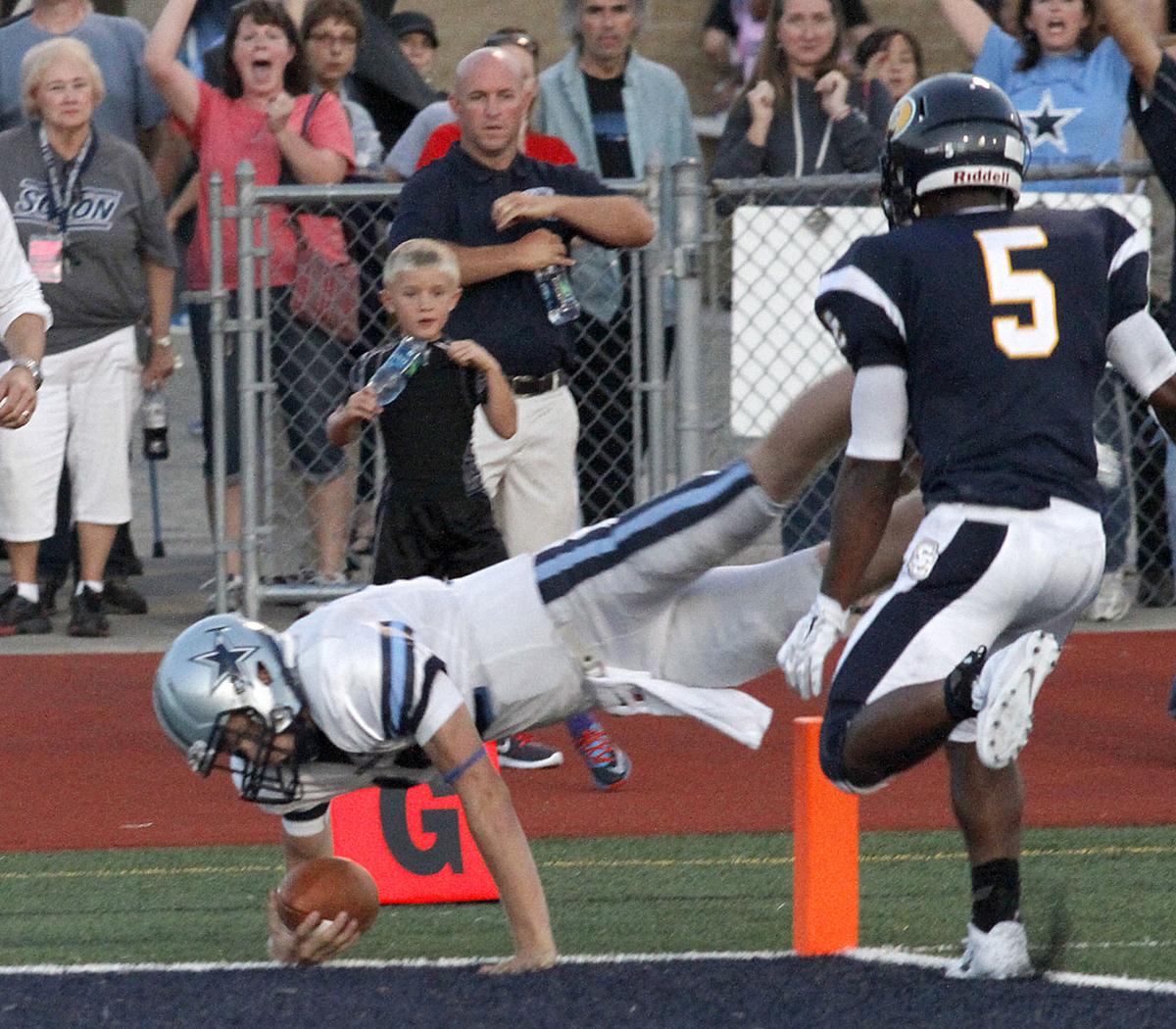 Kenston junior quarterback Parker Gdula scores a 9-yard touchdown after a Houdini handoff faked out Solon’s defense late in the first half Friday night. The play cut the Bombers’ deficit, 12-7, but the Comets prevailed, 20-14, in front of their home fans at Stewart Field. 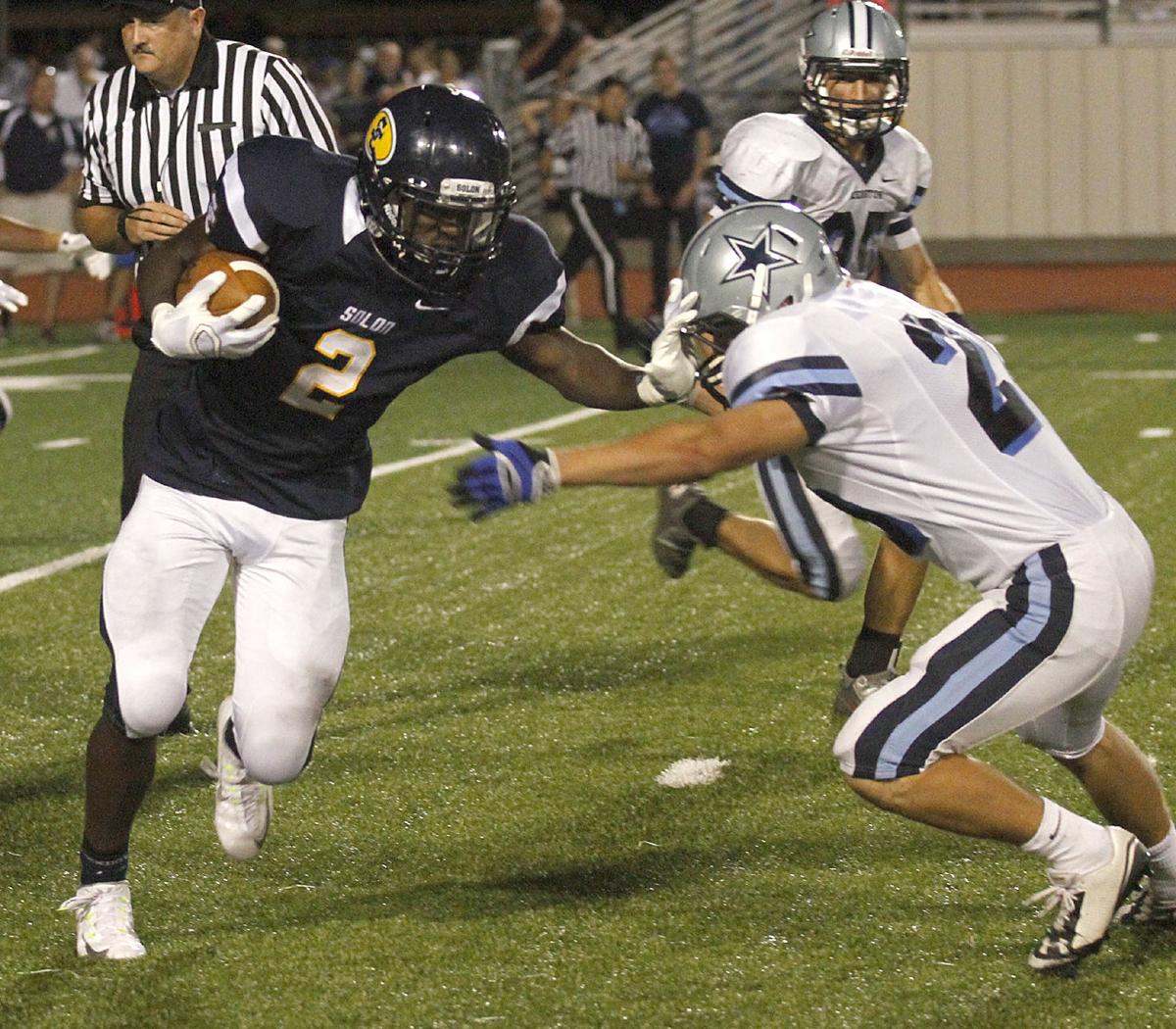 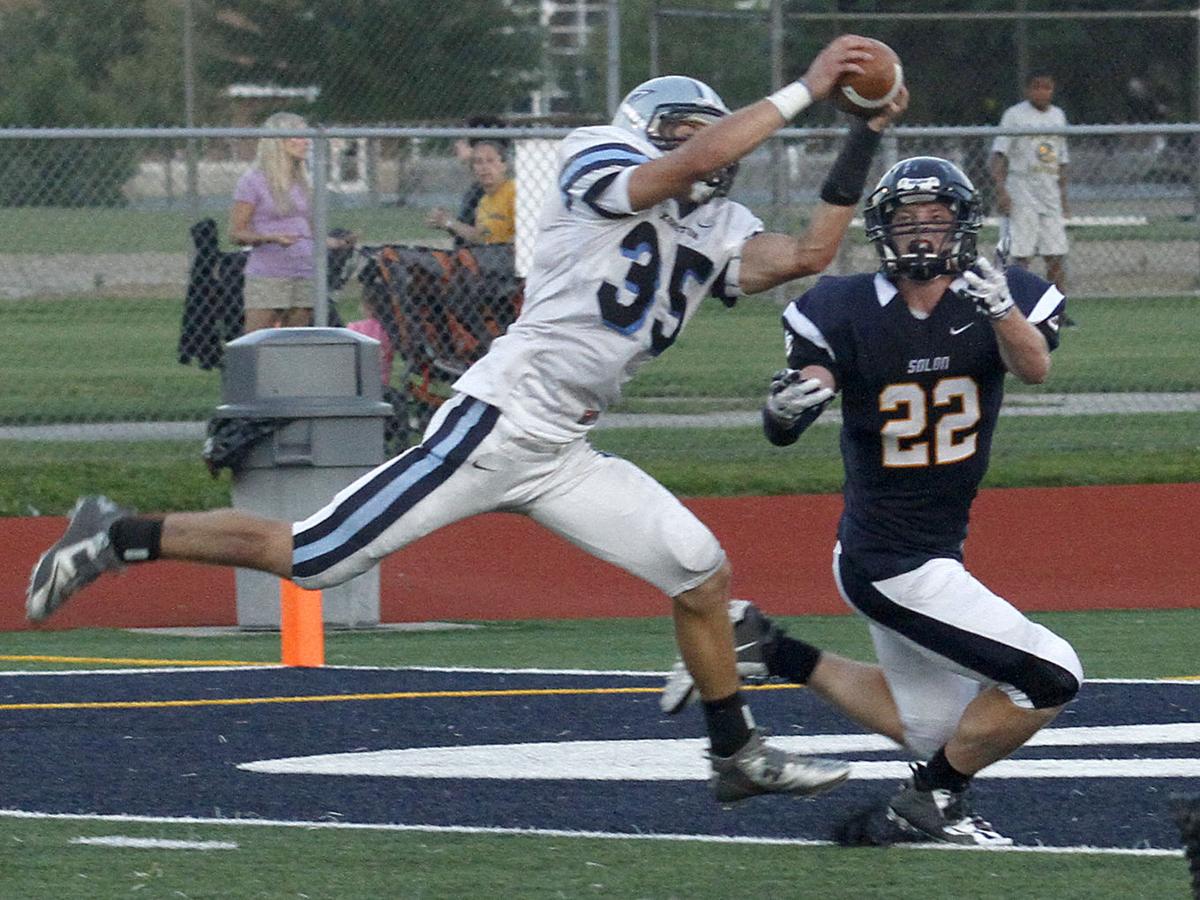 Kenston junior quarterback Parker Gdula scores a 9-yard touchdown after a Houdini handoff faked out Solon’s defense late in the first half Friday night. The play cut the Bombers’ deficit, 12-7, but the Comets prevailed, 20-14, in front of their home fans at Stewart Field.

Solon’s run defense was so stifling that Kenston’s offense toyed with lining up five wide receivers at times during last week’s season opener of Friday night lights at Stewart Field.

Inflicting 11 tackles for loss, including seven quarterback sacks, and a safety, the Comets’ front-seven tacklers created more than enough havoc to neutralize the Bombers’ hurry-up offense. The outcome was just 13 rushing yards for Kenston.

With that effort, Solon secured its 11th consecutive week-one victory, 20-14.

“It feels good as a defensive lineman that they came into the game knowing that they wouldn’t be able to block our defensive line,” Solon senior captain Tyree Seals said. “The tackles for a loss, the safety, those are plays we look for. We knew, if we kept that coming, it would set us up for a victory.”

Also defining the outcome of the game was the infection of penalties and the tilted field-position battle.

The Bombers collect nine yellow flags that cost them 75 yards, while the host Comets racked up a baker’s dozen for 110 yards.

Solon, however, won the special-teams battle with the performances of junior kicker David Sebuke and sophomore punt returner Joe Bubonics. Both teams had 12 possessions, but the Comets’ average drive started from their own 48-yard line, while Kenston’s average drive began at the Bombers’ own 19-yard line.

After Sebuke’s 26-yard field goal gave the Comets’ a 3-0 lead on the opening drive, Mooney connected with sophomore receiver Jake McCurry for a 27-yard touchdown and senior tight end Ryan Gallagher for a 39-yard touchdown in the second quarter – both on backside post routes.

“Well, on Jake’s touchdown, I saw them pressed against him, and so I just tried to lead him away from his defender, and he made a good catch,” Mooney said. “And for Ryan’s, I just wanted to finish the half with a touchdown.”

On Solon’s drive that preceded Gallagher’s touchdown, Mooney was picked off by Kenston senior defensive back Jeremy Wyers in the end zone. That sparked an 80-yard drive for the Bombers that concluded with a 9-yard touchdown run by junior returning quarterback Parker Gdula, who fooled the Comet defense with a fake handoff.

On Kenston’s ensuing kickoff, with 80 seconds to go in the half, the Bombers executed a pooch kick – perhaps in fear of a big Solon return – and the Comets took over on their own 47-yard line.

Six plays later, Gallagher caught that 39-yard touchdown pass with one second left before intermission to provide the Comet’s a 20-7 lead. That end-zone find was a great example of the sign in Solon’s weight room that says, “There’s always enough time,” Gallagher said.

“It felt really good to get my first one, but there’s a lot more coming this season,” said Gallagher, who actually started at quarterback last season. “I just do what my coaches ask of me. I do what’s best for the team. That’s what a captain does. So Johnny Mooney had a good look to me on that play.”

Despite being outscored, Kenston actually outgained Solon, 254 to 228 yards. While Gdula finished the game 19 of 35 passing for 241 yards, 176 of those came in the second half.

Driving 71 yards to open the third quarter, Gdula connected with senior Jay Weemhoff on what appeared to be a 19-yard touchdown reception in the back corner of the end zone, but offsetting penalties caused a replay of the down.

Two plays later, on first and goal from the four, Gdula threw his lone interception of the game, with Solon senior linebacker Alex Brown reading the route for the turnover.

“Jake McCurry, our safety, was behind me, and he was like, ‘Watch the slant! Watch the slant!’” Brown said. “So they ran the slant, and I bumped up, and the ball hit me in the chest, and I held onto it and hit the ground.”

The score remained 20-7 until Kenston put together an 84-yard drive on 12 passes and three rushes late in the fourth. Gdula connected with Wyers on a 5-yard touchdown for the 20-14 spread with 2:42 to play.

While Kenston went on to force the Comets three and out, 18 seconds weren’t enough time for the Bombers to pull off a comeback.

Both teams made their mistakes, but the final scoreboard is the primary focus in week-one football, Solon linebacker Brown said.

“In the end, we held strong,” he said. “To get the first one is awesome. It’s what we live for. We live to play football on Friday nights. It’s the best.”