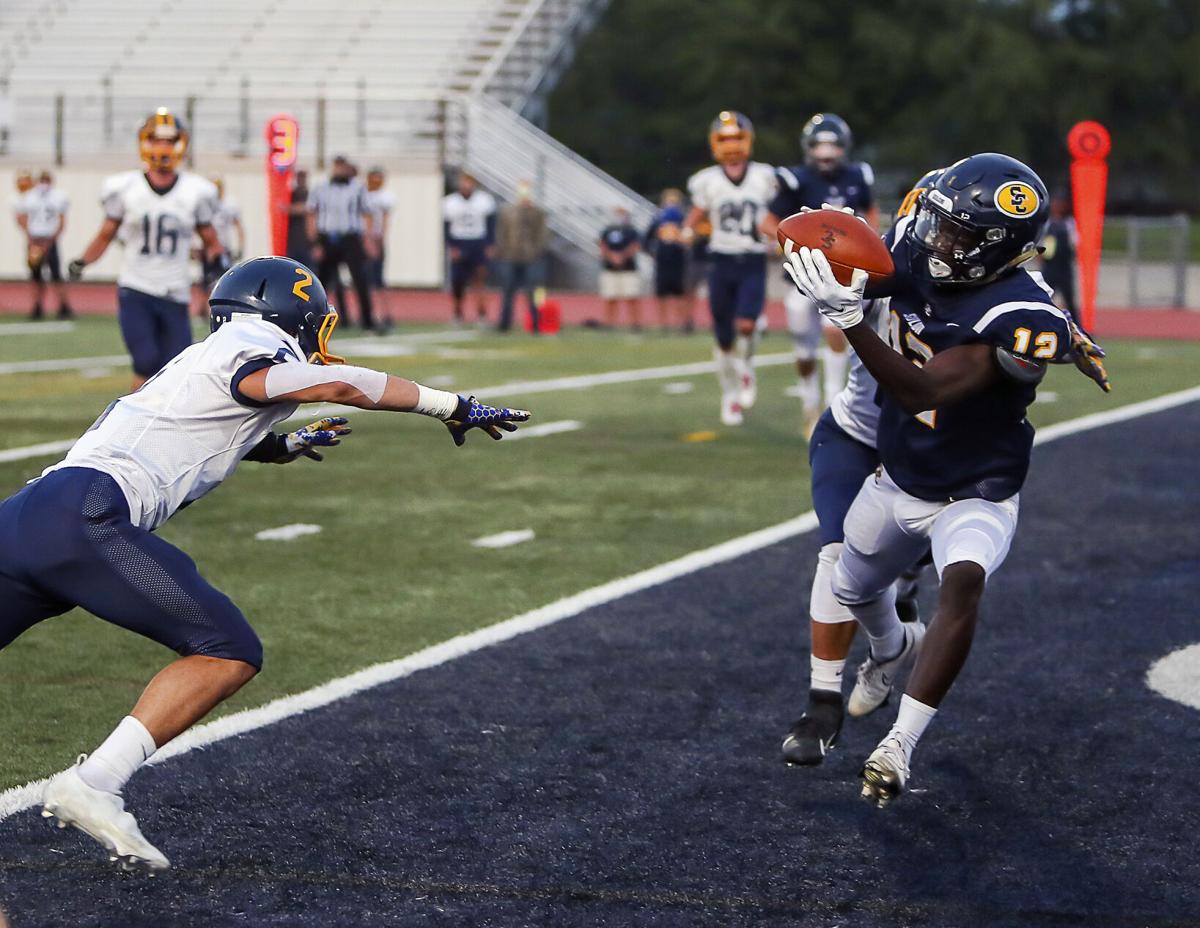 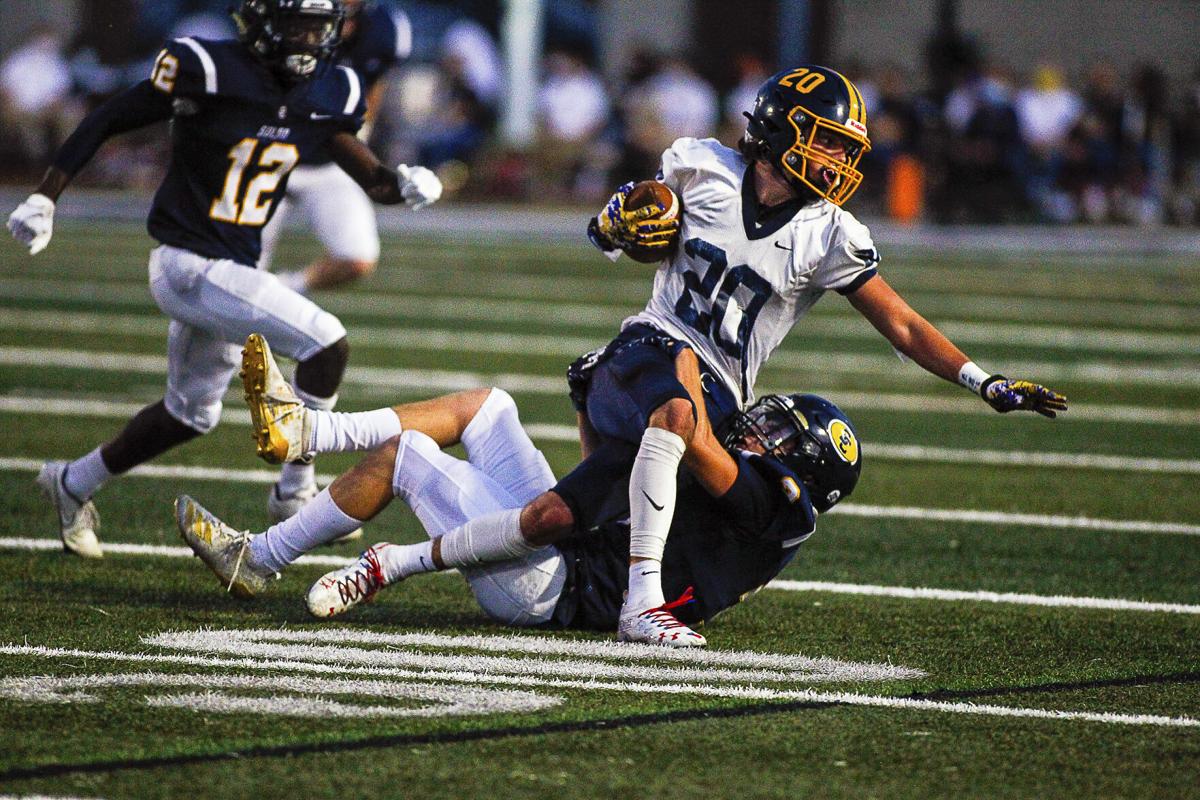 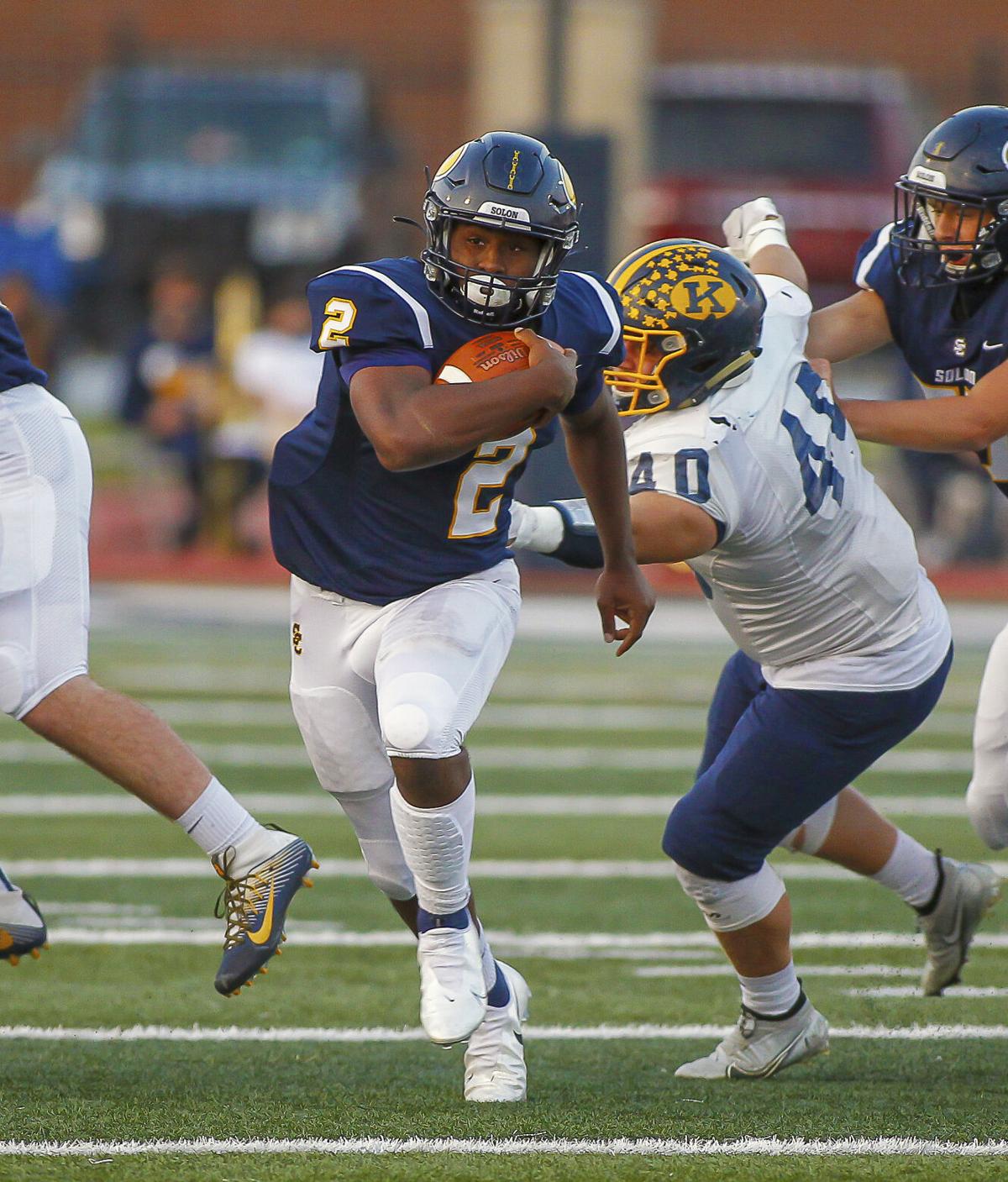 Solon 205-pound senior running back Khalil Eichelberger finds room on one of his 21 carries for 85 yards.

Solon 205-pound senior running back Khalil Eichelberger finds room on one of his 21 carries for 85 yards.

Solon finally got what it wanted – a home football game at Stewart Field.

The Division I Comet gridders have hosted some of the best programs from Ohio since head coach Jim McQuaide took the reins in 2003, leading his program to a 77-16 home record during the past 17 seasons.

When opponents come to town, Solon takes pride in its reputation as a tough place to play. But when the Division V AP No. 1-ranked Kirtland Hornets (5-0) arrived with a 34-game win streak on Friday, Solon’s lone home game this 2020 season didn’t feature its usual atmosphere.

The Comet faithful were limited in numbers – to a max of 825 fans, or 15 percent of Stewart Field’s 5,500 capacity, an order by the Ohio Department of Health adopted by the Ohio High School Athletic Association for this season.

So, when Solon senior quarterback Pat McQuaide was forced into a scramble and threw away an incompletion, the socially distanced home fans were quite quiet on the eve of a third-and-10 play late in the first quarter. The Comets were already facing a 7-0 deficit, after Kirtland went 80 yards on five plays during its opening drive.

“They’re soft,” a Kirtland fan yelled from across the gridiron. Everyone in the stadium could hear him without a roaring student section or the normal mingling among community members to drown him out.

His repeated taunting did not go ignored by the Comet gridders on the sideline, who started clapping and shouting, “Let’s go,” in support of their offense.

On the next play, McQuaide was forced out of the pocket again, but this time he threaded the needle on a 13-yard bullet to sophomore receiver Joel Kpassou in the end zone. Senior Justin Covey’s extra point tied the game, 7-7, with 1:24 to go in the opening frame.

That completed a 12-play, 58-yard drive for the Comets, which included a fourth-and-two conversion by 205-pound senior running back Khalil Eichelberger.

“And don’t get us wrong; they’re a good team. They’re a tremendous team. You don’t win 35 games in a row now without being a great program, and we have a ton of respect for them. They showed it tonight.”

That touchdowns toss was Solon’s (0-2) lone score of the game, as the Hornets went on to win a 27-7 affair against arguably their toughest regular-season matchup under 15th-year head coach Tiger LaVerde, who owns a 175-17 record at the helm.

In the first half, Kirtland scored on all three of its drives and wasted no time finding the end zone with the pigskin in its possession for less than 10 minutes. The Hornets needed 23 plays to go 219 yards for a 21-7 upper hand.

In particular, Kirtland 5-foot-10 senior quarterback Liam Powers was getting busy on a standout night that featured seven-of-nine passing for 92 yards with two touchdowns, as well as 10 carries for 118 yards with another touchdown.

Powers’ first touchdown throw came on a second-and-goal play from 13 yards out that was a popup toss in one-on-one coverage. Hornet 6-foot-4 senior Gage Sullivan came down with it for a 14-7 lead with 6:44 to go in the half.

Solon did have a pair of promising drives after Kirtland’s second and third touchdowns. First, the Comets drove down to the Hornet 21-yard line, but McQuaide felt the pressure on a fourth-and-eight pass and was flagged for intentional grounding with 4:32 to go in the half.

On the latter drive, Solon was second-and-five from the Hornet 25 with 42 seconds left in the half, but a McQuaide pass was tipped to the sky at the line of scrimmage, and Kirtland 6-foot senior defensive back Anthony DeMarco intercepted the free ball.

“That’s what I’m saying,” coach McQuaide said. “We show flashes, but we have to make sure we finish those. We do some good things, and the two teams we’ve played are doing more good things than we are. So, that’s the way you do this. That’s why you have a whole week to get ready to play.”

With a two-touchdown lead, Kirtland slowed down its offense and used the play clock to its fullest on every snap, controlling possession for 16 minutes, 15 seconds, of the 24 minutes. Yet the Hornets had just three possessions.

Kirtland 6-foot-1 senior kicker Mario Rodin split the uprights on a 30-yard field goal in the third quarter and then a 28-yard field goal for a 27-7 upper hand with 6:31 to play, for the eventual final.

“The way they controlled the clock, the way they use the clock; they run the ball, run the ball and then throw a pass,” coach McQuaide said. “It’s like they’ve lulled you to sleep to do that.

“So, give them a massive amount of credit. They’re a great staff, great program, everything they’ve accomplished to come here, and they dominated us, plain and simple. So, we have a lot to work on with what we’ve seen today, and we’ll come back tomorrow.”

Kirtland’s offense was only stopped once, when Solon’s Kpassou knocked the pigskin loose from quarterback Powers on a keeper, and 5-foot-10 senior defensive back Caesar Salerno recovered it with 2:55 to play.

The Comets finished with 222 yards on 52 plays with 13 first downs. McQuaide was 11-of-21 passing for 112 yards with three interceptions, as Kirtland’s pass rush had him working outside the pocket all night.

McQuaide’s first pick came on that tipped pass at the line, and his third pick came on a 27-yard toss into the end zone with 53 seconds left, when he was more or less just trying to make something happen on third down.

Up next, Solon will take on Greater Cleveland Conference foe Medina (2-3) at 7 p.m. Friday at Ken Dukes Stadium.