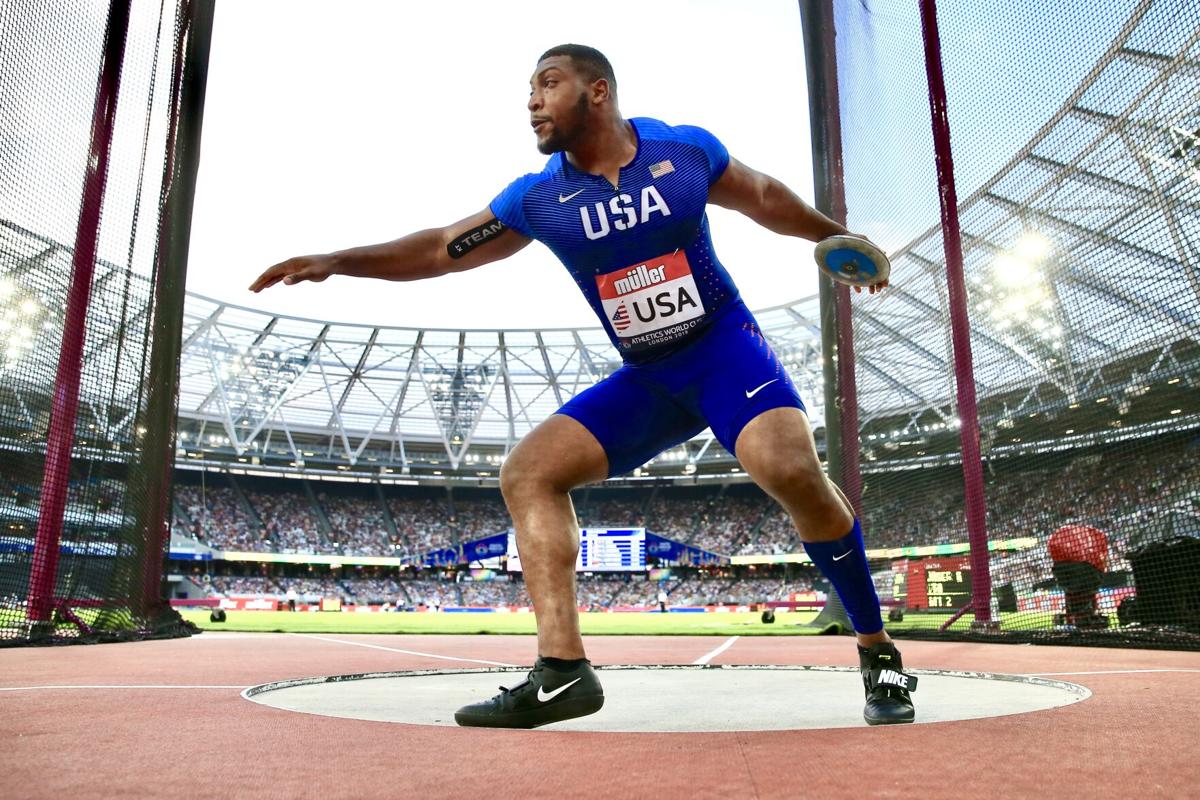 Solon graduate Reggie Jagers III put everything he had into his final throw at the Olympic Trials in Oregon and hit the mark to earn a trip to Tokyo. 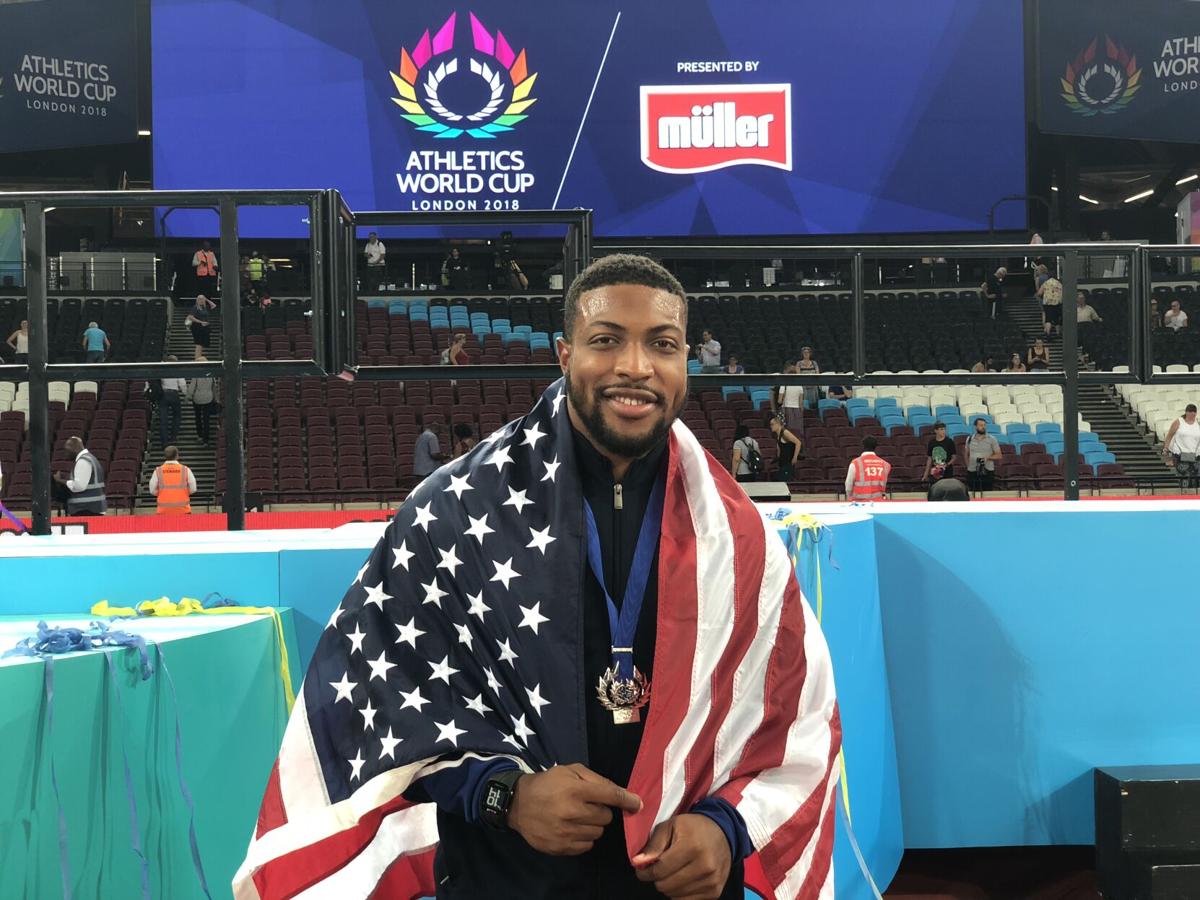 Reggie Jagers III has achieved several milestones in the discus throw since first taking up the sport only 11 years ago. He is the second Solon alum to qualify for the Olympics since Kris Kirchner did so during the 1980 season.

Solon graduate Reggie Jagers III put everything he had into his final throw at the Olympic Trials in Oregon and hit the mark to earn a trip to Tokyo.

Reggie Jagers III has achieved several milestones in the discus throw since first taking up the sport only 11 years ago. He is the second Solon alum to qualify for the Olympics since Kris Kirchner did so during the 1980 season.

Aim for the stars and land on the moon.

That’s something that Reggie Jagers III has told himself his entire athletic career.

After he placed third in the Junior Pan American Games in 2012, he realized that he had a real chance to qualify for the discus throw in the Summer Olympics.

“The Olympic dream was really born because I was wearing a Team USA jersey,” said Jagers. “I was now considered number three in the Western hemisphere for athletes under 21 at an international level so putting that jersey on and going through that experience really made me think about a higher level than I was at.”

His quest to get the Olympics was delayed a year as the 2020 Olympic trials were postponed due to the pandemic. He stayed ready by working out every day during the pandemic.

All his hard work culminated when he qualified for discus on June 25 at the US Olympic Trials at Eugene, Oregon.

The 2012 Solon grad’s bid to get to Tokyo hinged on his last throw of the finals.

After checking with the official, Jagers needed to eclipse 62.19 meters to make it into the top three. The top three finishers would make the Olympic team.

Jagers was running on fumes as he sat in fifth place.

“I was pretty much like a zombie,” he admitted. “It was like I was watching myself not sleep and I tried everything. I did ice baths, mediation and listened to calming music. The first day I didn’t sleep was on the way to Oregon. The preliminaries were at 7:00 pm so I had adrenaline from the meet. The day before I went home and only had three hours of sleep and my body was not feeling great. I just felt mentally fatigued and it was just hard to focus.”

Jagers said he knew he could exceed 62.19 meters. It was a distance he had thrown several times before but because he was physically drained, he needed to tap into every ounce of hidden strength. He remembered looking up into the crowd and saw his greatest inspiration, his mother Phyllis, sitting in the stands and that gave him the needed strength and focus.

“I decided if my technique wasn’t on point or I wasn’t feeling well I was just going to scream,” he said. “I put everything into the throw. When I started to throw I wasn’t feeling too great and by the time I got to the finish of the throw I just decided to give it my all whether it was good or bad and I saw the disc hang up in the in air a little bit longer. I didn’t hit it too well so it was kind of wobbly. It wasn’t flying too well but I put a lot of power into it and when the discus landed you could hear the crowd erupt and my emotions went off with the crowd.”

According to Jagers, it felt like an eternity as he waited for the distance to be posted on the scoreboard. He had a pretty good idea that his throw had the distance but nothing was official until it showed on the Jumbotron. Finally, it showed the disc landed at 62.61 meters.

While his throw had catapulted him into second place, Jagers had not punched his ticket to Tokyo yet. There were still two more competitors who had a chance to knock him out of the top three but they could not surpass his mark and it was now a done deal.

Jagers had realized his dream of competing on one of the biggest athletic stages. He was the second Solon alumni to qualify since Kris Kirchner made the cut for the 1980 Olympics.

Jagers did not know anything about discus until his junior year of high school. When he was lifting weights during the indoor football season, he could see a track practice. After seeing some kids practice discus, Jagers said he believed it was something he could do.

“I researched it for two weeks on YouTube,” explained Jagers. “Because anytime I’m interested in something I look it up and research it myself and see how it is before I actually engage in it. I didn’t really practice. I just watched videos on it and then I mimicked it when I was out and about and I just tried out for the coach. He blew me off a little bit, and said I could try out but he was not excited and when I threw it I’m pretty sure I threw farther than anyone else on the team.”

After just a year and a half of competing, Jagers made it all the way to the state track meet in Columbus, where he placed fifth. Despite having less experience in the event than most of his competitors, Jagers proved to be a quick study.

It netted him an athletic scholarship offer from Kent State University. Jagers said that he developed a good rapport with Kent State throwing coach Nate Fanger, and believed he could help him get to the next level.

“Coach Fanger was the only coach who saw more in me than the other coaches did in that time,” said Jagers. “Some coaches were saying we can’t give you a full scholarship because I hadn’t competed in the sport long enough, so I was more of a risk. I felt with my progression I should get a full ride. No one had gained that much distance in such a short time and coach Fanger saw the vision in me. He saw the potential and put his money where his mouth was.”

Jagers made the 2013 NCAA Championship and was awarded the Kent State Freshman of the Year Award. After racking up a number of milestones with the Golden Flashes, he turned his attention to the Olympics.

His path to Tokyo hit a snag when he tore his pectoral muscle in the early months of 2020 while he was lifting weights. According to Jagers, he felt the pressure as the Olympic trials were only six months away when he suffered the injury. But the trials and the Olympics were postponed a year due to the pandemic.

Jagers stuck the moon landing when he earned a berth to Tokyo but he is still shooting for the stars. For as long as he can remember, winning a medal at the Olympics has been his dream so he is not slowing down. He will try and become the first Solon graduate to earn a medal on July 30 and 31 at the Japan National Stadium.