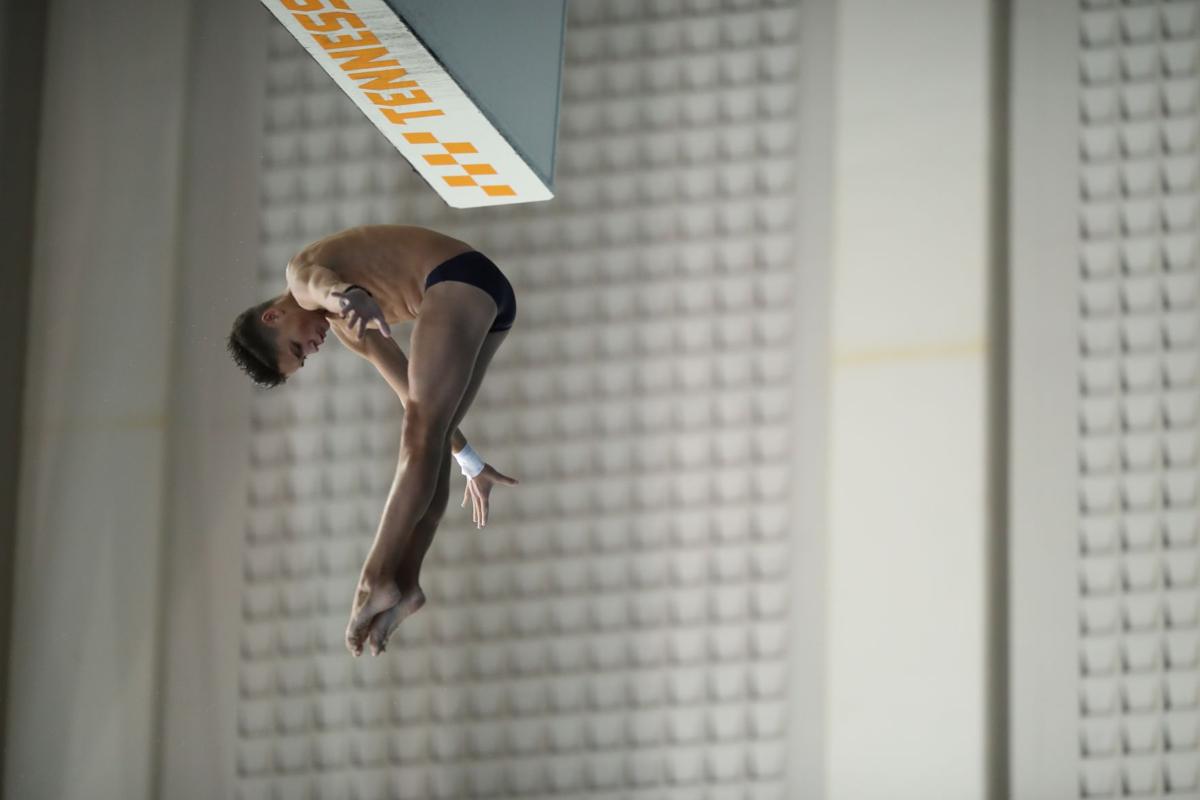 Dominic Roberto, 13, of Solon, flies high during the 2019 USA Diving Junior National Championships this past August at the University of Tennessee, where he took bronze on the platform. 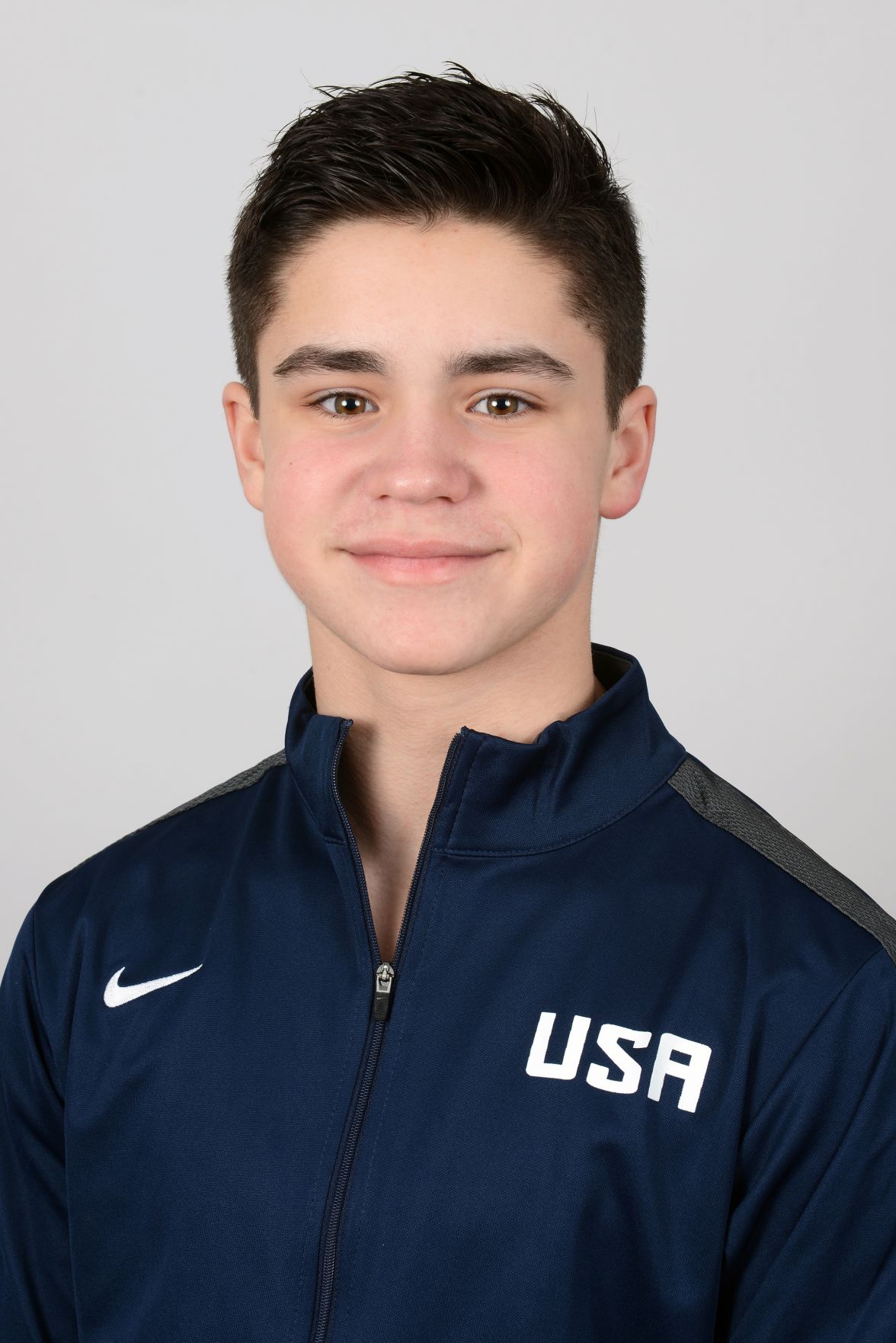 Solon’s Dominic Roberto, 13, poses with his Team USA gear after being named to the USA Diving 2020 High Performance Squad earlier this month. He was one of three male divers in his age group selected. 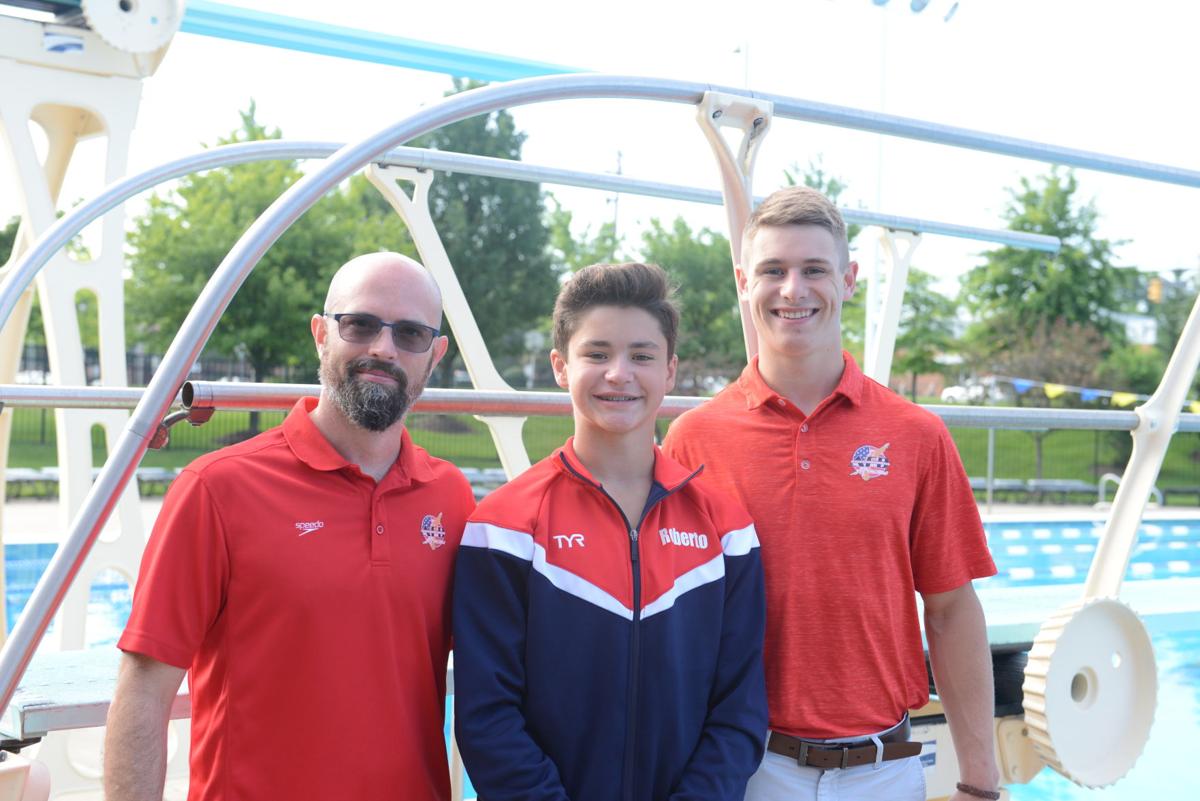 Dominic Roberto, 13, of Solon, flies high during the 2019 USA Diving Junior National Championships this past August at the University of Tennessee, where he took bronze on the platform.

Solon’s Dominic Roberto, 13, poses with his Team USA gear after being named to the USA Diving 2020 High Performance Squad earlier this month. He was one of three male divers in his age group selected.

Solon 13-year-old Dominic Roberto was just getting settled on the 7 1/2-meter platform during his second season diving that height at the 2019 USA Diving Junior National Championships this past August in Tennessee.

Representing the American Flyers Diving club, Roberto recorded a seven-dive score of 312.7 points, including 63 points on his back 2 1/2 somersault tuck, to finish third in the 12-and-13 boys competition for a bronze medal.

But in the sport of diving, it’s unheard of for junior divers on the edge of moving up in age group to rest on their laurels.

“That score allowed me to compete at that event,” Roberto said about getting an invite to take part in the Senior Men Platform event during the 2019 USA Diving National Winter Championships held in December at the Jean K. Freeman Aquatic Center in Minneapolis.

“It was super cool, because I met a bunch of Olympians and a bunch of really cool divers,” he said. “So, yeah, that was really fun.”

With his platform score from summer nationals, Roberto met the criteria for possibly getting named to USA Diving’s 2020 High Performance Squad, or Team USA, which is a program that was built to help USA Diving’s athletes achieve their best and to create a clear path for developing athletes who aspire to have international and Olympic success.

As announced earlier this month, Roberto was one of 91 athletes in the nation named to that squad, not to mention he was just one of three male divers in his age group who earned the recognition.

“Well, it’s amazing, and it just shows how my hard work has really paid off,” Roberto said. “I definitely wouldn’t be able to do it without my coaches and my parents and my sister and my friends.”

But before he’d further make a name for himself by joining that high-performance squad and before he’d pack his bags and head off to Minneapolis to compete among the nation’s best senior platform divers in December, Roberto was on a tight timeline to get his 10-meter tower list together.

As a junior diver in the Senior Men Platform competition, Roberto would need to have six 10-meter dives in his repertoire, including one from each category – forwards, fronts, backs, reversals, inwards and arm stands.

AFD head coach Marc Cahalane said he prefers that his divers make the transition from the 7 1/2-meter to 10-meter tower gradually, without any sort of rushed timeline.

“I like to try to take it pretty slow,” he said. “I don’t like having my kids that are under 14 years old even do 10 meter until they’ve grown into their bodies and at least put on some more muscle mass. So that’s a call where I look at each individual athlete to see where they are physically and skill wise.

“And with Dominic, he’d been training a lot of tower, he really likes it, he’s going to a workout strength specialist – really, he was ready for it.”

Roberto has been working with exercise physiologist Chris Travers, of the Cleveland Clinic, at least twice a month since 2018 for his strength conditioning and had been doing some basic dives off the 10-meter tower to adjust to the impact of his rip. So, he wasn’t totally jumping into a dry pool at that point.

The other factor that played into effect was the fact that Roberto didn’t have a degree-of-difficult limitation he had to meet for the 10-meter platform competition in Minneapolis. So, he didn’t have to try to add huge dives but rather move some of the dives he’d already been doing up to the higher tower.

Nonetheless, Roberto still learned a couple of new dives that were stronger. And he still had a short window of about two months to prepare.

“It never really was stressful to me,” Roberto said. “I mean, I’m the type of person who loves working hard for something. So, I love the challenge. It was never stressful to me. You know, I just focused on one dive at a time, and, as I got those dives, I knew I’d be ready for the meet.”

In addition to working with Cahalane, Roberto has spent a ton of time developing the next stage of his diving career with AFD assistant coach Curtis Roden, whom Cahalane just added to his staff this past year.

A 2015 North Canton Hoover graduate, Roden was a Division I state podium diver who went on to compete at Cleveland State University. Not to mention, he has a gymnastics background.

“Well, Curtis knows everything,” Roberto said. “When he’s watching you dive, he knows that, ‘Hey, if you stand up taller, then this is going to happen.’ He knows cause and effect, and he’s very good with technique and stuff like that.”

One of Roberto’s lower degree-of-difficult dives in the Senior Men Platform competition was his back 1 1/2 tuck. But performing that dive off the 10-meter tower turned more heads than expected, from Olympians and coaches alike.

A lot of divers and coaches think it’s more difficult and a little bit crazier to do the easy dives from that height, coach Cahalane said.

“Like, I had him doing a back 1 1/2 (tuck) on 10-meter, which the looks I got and the looks he got were pretty comical,” Cahalane said. “It was pretty cool. But he earned a lot of respect in many people’s eyes by being able to do those high-technical control dives.

“So, it’s insane for a 13-year-old to do that dive. And there were coaches who were like, ‘That kid’s insane.’ And I think it might have been Steele Johnson or one of the Olympians who was like, ‘Yeah, you wouldn’t catch me doing that dive.’”

The timing of the slow-rotation dives from the 10-meter tower must be more precise to avoid a smack, Cahalane.

Roberto said he was unsure about learning his back 1 1/2 tuck, but he sure didn’t mind the attention during the senior winter nationals.

“I will say this – when Marc was telling me to do that, I was like, ‘No, dude.’ I was on the edge about it,” Roberto said. “I definitely didn’t want to do it. But based off how much attention it got, if I would have known it would have gotten that much attention from coaches and Olympic divers, I definitely would have considered doing it more. But that one, once you get used to it, it’s not that bad.”

Roberto’s highest-scoring dive of the senior competition was his front 2 1/2 somersault with a full twist from the pike position, which earned him 58 points.

That dive, which includes one flip, then the twist and then another 1 1/2 from the pike position, took the most amount of work to prepare for, Roberto said.

“The hardest thing with that dive, in my opinion, is, once you’re coming out of the twist and you’re in the pike, you have to grab really hard so it doesn’t look like you’re loose and you’re just flying through the air,” he said.

In addition to Johnson, some of the other Olympians and Olympic hopefuls Roberto competed against on the 10-meter tower were David Dinsmore, Jordan Windle, Rafael Quintero, Jacob Siler and Zach Cooper.

Not to mention, Roberto’s former AFD teammates Jordan Rzepka, 17, of Solon, and Lyle Yost, 19, of Shaker Heights, were at the competition. They too were named to the 2020 High Performance Squad for Team USA earlier this month, as was Orange 2019 graduate Janie Boyle, 18, who is now at the University of Texas.

“It’s such an honor to be on Team USA with those guys,” Roberto said. “Like, I don’t know if I like anything more than competing for that team. And it just motivates me to work harder. Recently, I’ve upped my practices from four or five days a week to six days a week. So, I’m really excited for that.

“And I’m following other divers and doing a lot more studying of their dives on film and working on how I can convert that to my dives.”