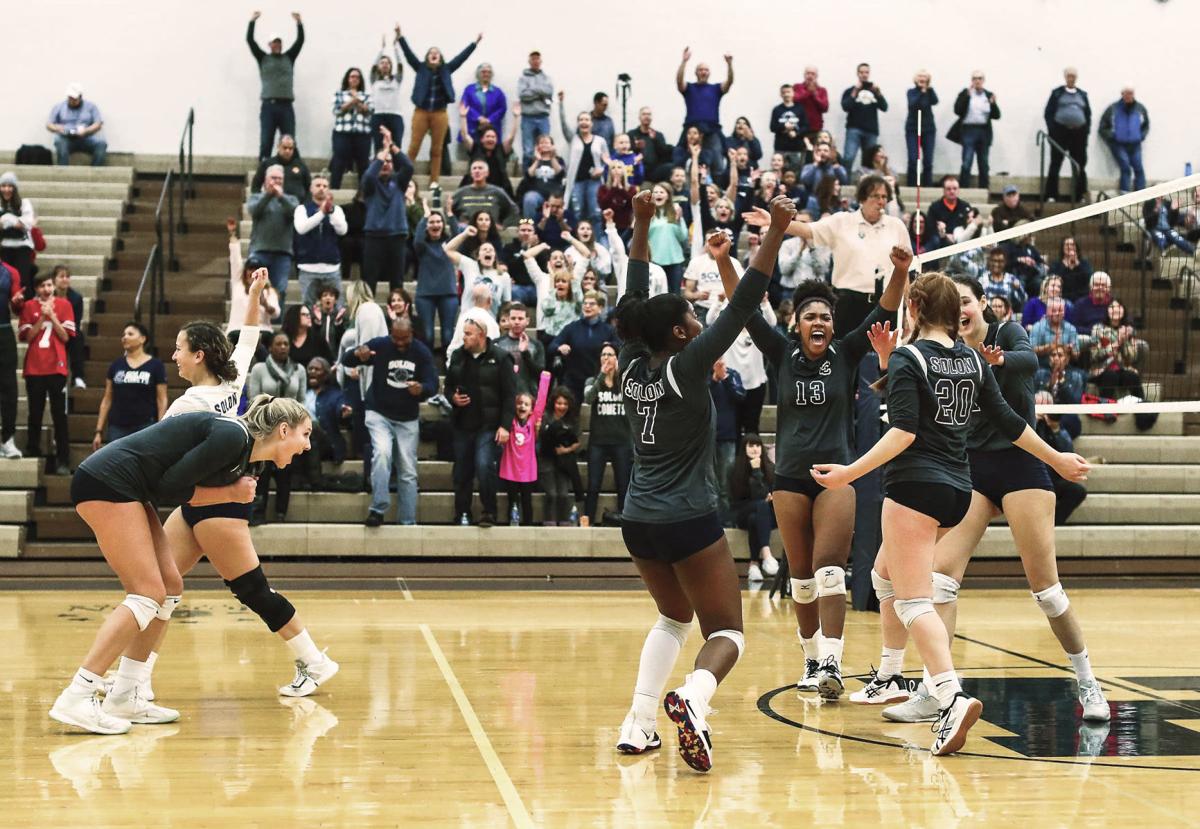 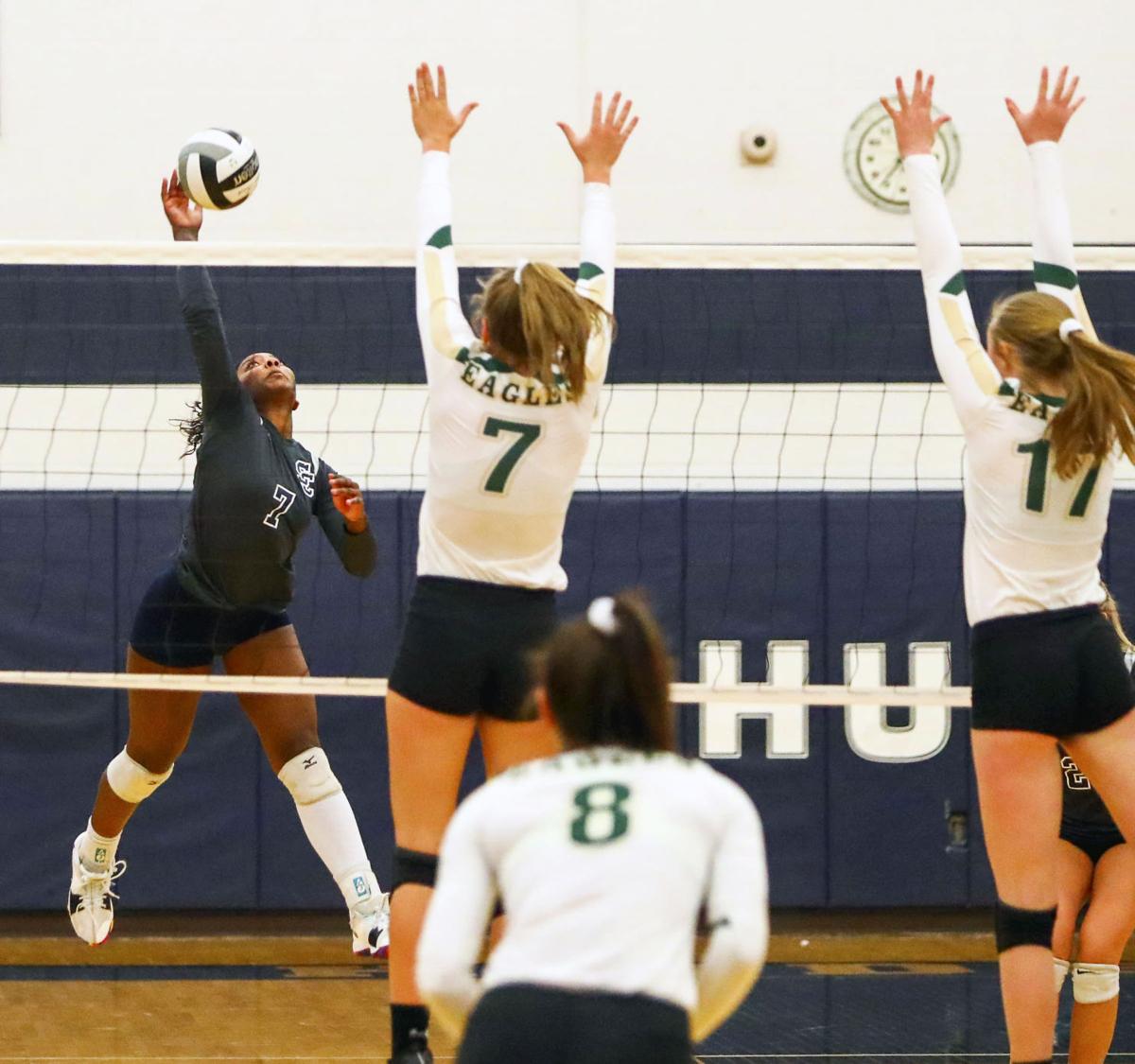 Solon 5-foot-8 junior outside hitter Simone Tyson (left) puts up an attack against the double block of GlenOak 5-foot-9 freshman Natalie Stepanovich (No. 7) and 6-foot senior Hannah White (No. 17) during the Lady Comets’ three-set sweep in the Division I regional final on Saturday in Hudson. 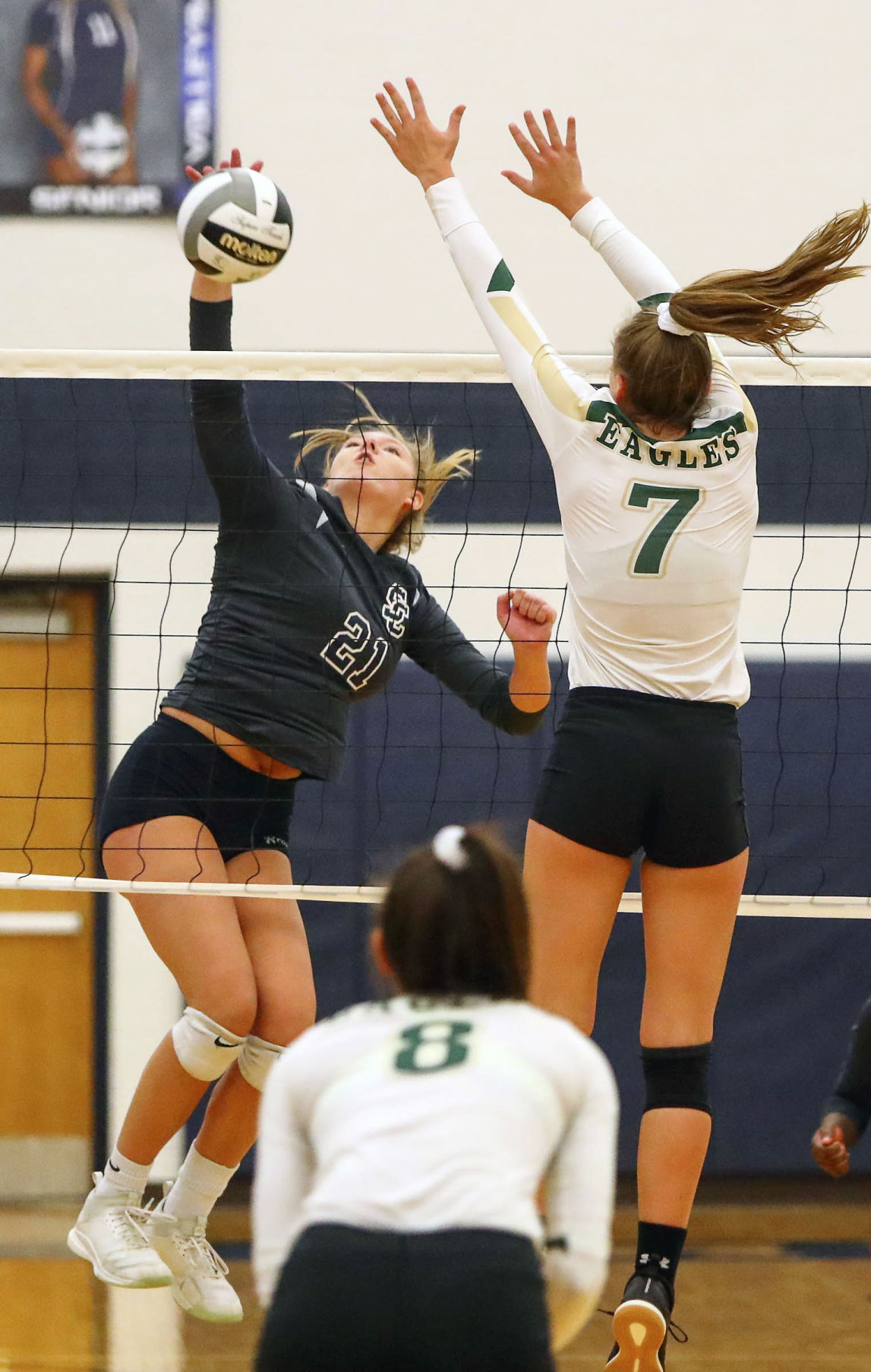 Solon 6-foot senior middle McKenna Podracky (left) hits around the block of GlenOak 5-foot-9 freshman Natalie Stepanovich (No. 7) during the Lady Comets’ three-set sweep in the Division I regional final on Saturday in Hudson.

Solon 5-foot-8 junior outside hitter Simone Tyson (left) puts up an attack against the double block of GlenOak 5-foot-9 freshman Natalie Stepanovich (No. 7) and 6-foot senior Hannah White (No. 17) during the Lady Comets’ three-set sweep in the Division I regional final on Saturday in Hudson.

Solon 6-foot senior middle McKenna Podracky (left) hits around the block of GlenOak 5-foot-9 freshman Natalie Stepanovich (No. 7) during the Lady Comets’ three-set sweep in the Division I regional final on Saturday in Hudson.

Solon volleyball trailed, 14-13, on a hitting error in the opening set of the Lady Comets’ Division I region championship match against one-loss Canton GlenOak on Saturday afternoon at Hyser Gymnasium in Hudson.

Six-rotation senior outside hitter Simone Tyson put down a kill on the ensuing point, and the Solon girls didn’t trail again for the rest of the match en route to defending their title by way of a sweep, 25-18, 25-17, 26-24. Solon finished off that opening frame on a 12-4 run.

The Lady Comets entered the match at 17-9, while GlenOak was 25-1 with the Lady Golden Eagles’ lone loss coming in a best-of-three tournament game.

But make no mistake, Solon left zero doubt on the court as to who the better team was during the regional title game Saturday. It was the Lady Comets’ 11th win in their past 12 contests.

“I think everyone was the key,” Solon’s Tyson said. “We came in here with a strong mindset. We just knew that we were going to do business. Everyone played a part in the team’s win. There was not one specific thing that we did. It was just playing as a team, and it was great.”

For the second straight year, Solon entered the playoffs not ranked in the top 20 of the Ohio High School Volleyball Coaches Association Division I state poll.

And for the second straight year, the Lady Comets are one of four teams still standing under second-year head coach Kaylee (Kruse) Rodriguez, a former libero and 2013 graduate of the program. She was the co-head coach with 18-year veteran Melissa FitzGerald, before taking sole ownership of the reins this season.

“The girls play with heart, they play as a team, they play for each other; that’s how you win games,” Rodriguez said. “We told them early on in the year that, if we could figure this out, put other people’s needs on the team ahead of your own, be a selfless player, then we’re going to return back. There’s not one girl on the team that gets credit for this.”

That opening set was back-and-forth all the way to a 16-15 advantage for Solon, with neither team leading by more than two points, but it became clear early on that, if the Lady Comets could stay out of their own way, nothing would stop them.

But Solon took over the set on a five-point service run by 6-foot senior middle McKenna Podracky, which provided a 24-16 upper hand to put the Lady Comets in position to close out the frame on 6-foot-2 senior middle Alex Levi’s kill. Levi had three kills and two blocks in that set.

“I think one of the biggest things we had to do is mix up our offense,” Podracky said. “We knew that they were a strong outside hitting team. So, we worked on practicing blocking that, and then we also worked on mixing up our sets so they never knew where our hits were coming from.”

Solon junior setter Leah Corrao, who finished with 34 assists, distributed the ball to five hitters, including double-digit kills by middles Podracky, 12, and Levi, 10, as well as kills by outside hitters Story, 13, Tyson, six, and 5-foot-8 senior Amanda Uguccini, five.

GlenOak, on the other hand, funneled the majority of its sets to 5-foot-8 senior outside hitter Natalia Henderson, 10 kills, and 5-foot-9 freshman outside hitter Natalie Stepanovich, 13 kills, but the Lady Golden Eagles didn’t have the size or depth on offense to keep up with Solon’s arsenal.

Not to mention, the Lady Comets accumulated 47 digs, led by senior libero Taylor Bergoch’s team-high 14 bumps. And that effort came with the pain of a bum left knee that was in a brace.

“In our last match, against (Archbishop) Hoban, she did something to her knee,” coach Rodriguez said of the Lady Comets’ regional semifinal win, 25-14, 25-20, 25-17, two days earlier. “So, she was struggling a little bit, but she played phenomenal. There wasn’t even a chance of me getting her to not play. It was never questioned.”

Solon played a disciplined second set with just one hitting error, one service error and two violations and, in turn, ran the table – even with GlenOak’s outsides heating up.

Bergoch had a five-point service run that provided the Lady Comets’ a 15-9 lead, and, with a solid combination of serve receives and hitting, led by Podracky’s five kills in the set, Solon was able to play side-out volleyball from there for the 25-17 win and 2-0 match lead.

“They have an amazing defense, but so do we,” Solon’s Story said. “So, we decided that we have to bring our strong offense, strong blocks and then work together and play as a team to beat them.”

But sweeping a team when a title is on the line takes a certain sense of urgency that wasn’t seen in the other three Division I regions.

And GlenOak, which was chasing its program’s first state final-four berth, wasn’t going down without a fight.

“I told my girls to act like they had just gotten killed in the first two games,” Rodriguez said. “I wanted them to go out like we had just lost two games, because that’s how you need to fight, because they’re going to come back fighting just as hard. So, I think we did a great job. It takes a lot of focus to close out a third game.

“And we were focused, we were disciplined and we did a great job.”

Solon opened the third frame with a 7-3 lead that featured a block by Tyson and a back-row kill by Tyson, but GlenOak rallied to tie the set at 9-9.

The Lady Comets reclaimed command, 16-11, on two-point service runs from seniors Kate Sanders and Uguccini, but GlenOak chipped away and chipped away to eventually lock up the set at 21-21, 22-22, 23-23 and 24-24, before setter Corrao caught the Lady Golden Eagles by surprise on a second-touch kill for the 25-24 Solon lead.

Bergoch served up match point and kept GlenOak out of system with a Lady Golden Eagle attack out of the back row that Tyson cleanly passed to Carrao, who set up Uguccini on the outside to put the match away on a kill off the block.

Uguccini, who was out all of last season with an ACL injury, is Solon’s No. 5 hitter this season, but she swung with authority when she needed to do her part in securing a back-to-back region title for her team.

“Game-winning kill,” Rodriguez said. “Mandy (Uguccini) has a tremendous amount of heart and passion, and she is one of the smartest players on the team. And she will get it done. I felt completely confident with her today, and it was awesome watching her get the game-winning kill.”

Solon will be making its fourth appearance to the state final four, with previous trips coming in 2000, 2006 and 2018, but the Lady Comets have yet to advance to a state championship game. They join Dublin Coffman, Jackson and Wooster as the only public schools to secure back-to-back state berths in the past 20 years.

Up next, Solon will play state No. 6-ranked Columbus St. Francis DeSales (24-2) at noon Friday at Wright State University’s Nutter Center in Fairborn, on the northeast side of Dayton.

“Coming into this season, I was confident enough, but I really didn’t think we would make it to states,” Podracky said. “I’m so proud that we made it back, and I’m so excited.”