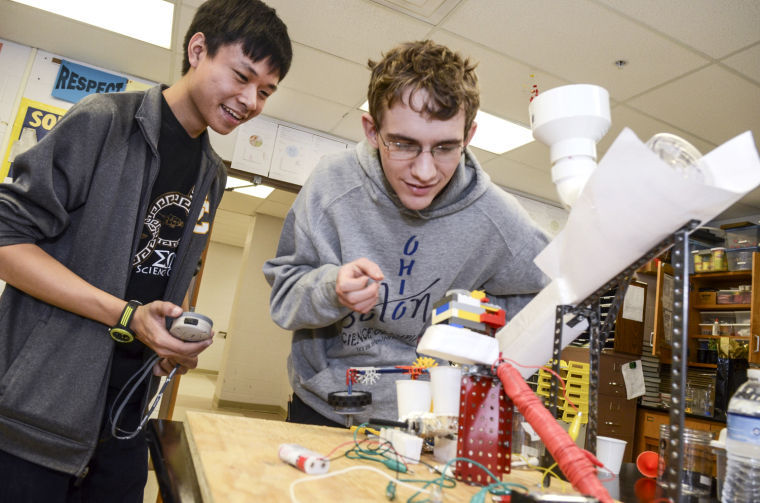 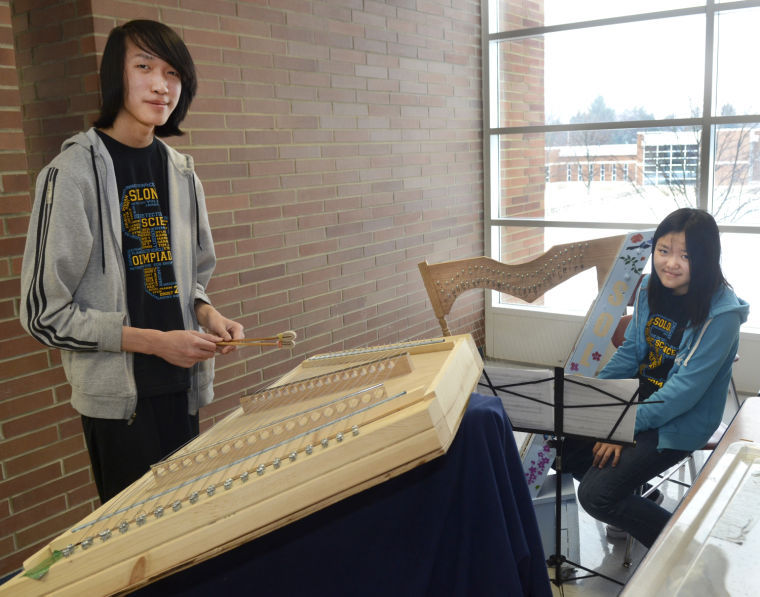 Michael Zhan, left, a ninth-grader at Solon High School and Michelle Dong, a sixth-grader from Orchard Middle School are winners of the gold medal in the "Sounds of Music" competition. Michael created a hammered dulcimer and Michelle built a harp.

Michael Zhan, left, a ninth-grader at Solon High School and Michelle Dong, a sixth-grader from Orchard Middle School are winners of the gold medal in the "Sounds of Music" competition. Michael created a hammered dulcimer and Michelle built a harp.

School teams from Ohio and as far away as Miami, Fla., attended the Solon Invitational Science Olympiad at the high school and middle school Saturday.

Both Solon teams are legendary. The middle school team won six consecutive national Science Olympiad tournaments, including the last three as twin victors with Solon High School’s team. The three-peat by two district schools is unprecedented in the 29-year history of the Olympiad national tournament.

Brand new head coaches this year are Bryan Drost at the middle school and Nicole Geiger at the high school. Dr. Drost, a Solon Spanish teacher who has a Ph.D. in curriculum and instruction, replaced Drew Kirian, who retired after coaching the team for 26 years. He assisted with Science Olympiad for several years and works with veteran assistant coach Nevin Voll, a certified teacher.

“It’s going really well,” Ms. Geiger said, taking a moment in the Solon team room amidst her hosting duties. “I walked into a well-established program with awesome kids and parents. I’ve been learning a lot and getting great help from my assistant coach and captains. We have a great future ahead.”

Hosting an invitational requires a myriad of duties from registration to running events, scoring, scheduling and providing food service for students, coaches, chaperones and judges.

Getting those tasks accomplished “is all about relationships – whom you can connect with inside the school and outside the school to get things done for kids,” Dr. Drost said.

Both coaches praised the dedicated parents who volunteer at both schools, as well as their teams.

“Everyone has fun, everyone is self-motivated and everyone puts in the effort because we want to,” said senior Jonathan Chai, who serves as co-captain with senior Tyler Eston. At Science Olympiad, he said, “You get to try new things and learn about different parts of science you wouldn’t think to study.”

“You have to build two instruments of different ranges,” said Michael, a piano and viola player who built a hammer dulcimer. “They have to be different types of instruments.” The students also had to perform a required and chosen melody in competition.

Michelle, who plays violin, piano and clarinet, made and decorated a harp. “I thought it was cool,” she said about the project.

The Solon Middle School team, headed by co-captains Jonathan Wang and Zach Stanik, had several other gold medalists: Stephanie Wand and David Feng in Boomilever; Zach Stanik and Vishal Sundaram in Heredity; Jonathan Wang and Timothy Yi in Water Quality; Anushree Aneja and Jonathan Wang in Write It, Do It; and Sydney Bolomey and Albert Zhu in Can’t Judge a Powder.