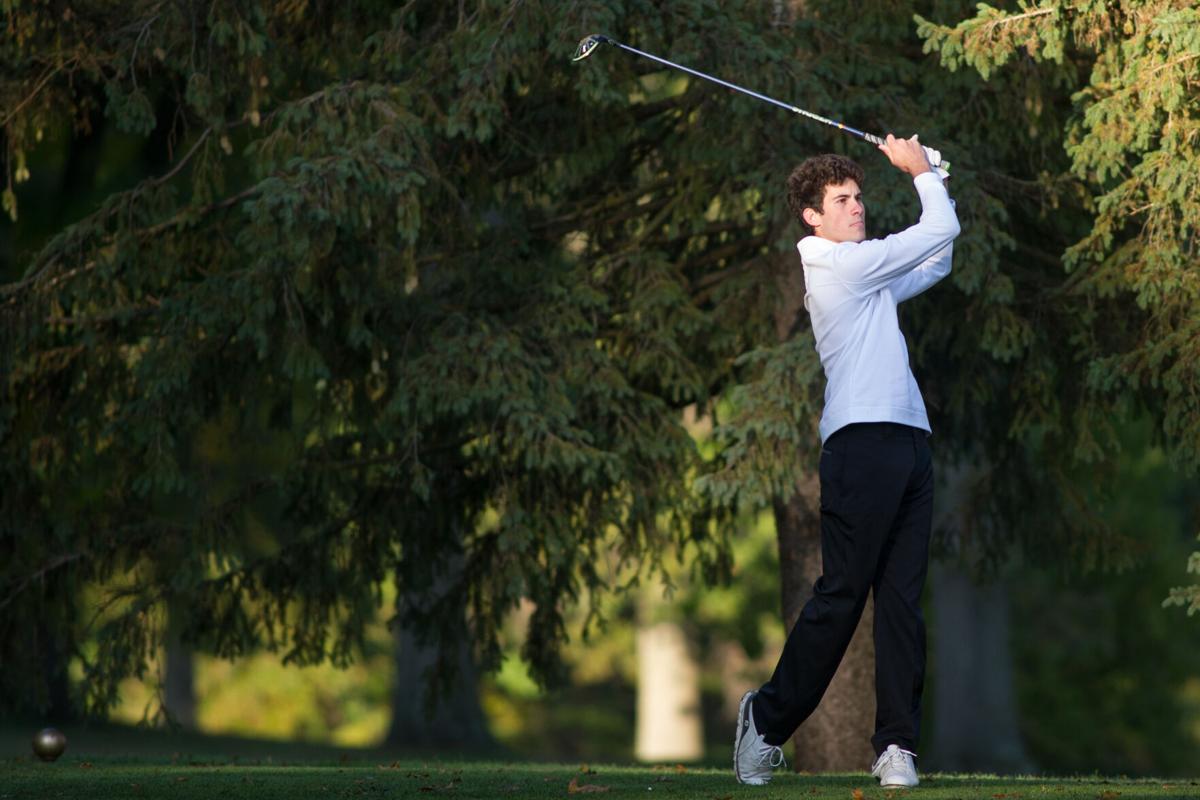 Orange senior Dawson Goss follows his drive during his 85-stroke round in the Division II Northeast District golf tournament last week at Windmill Lakes in Ravenna. 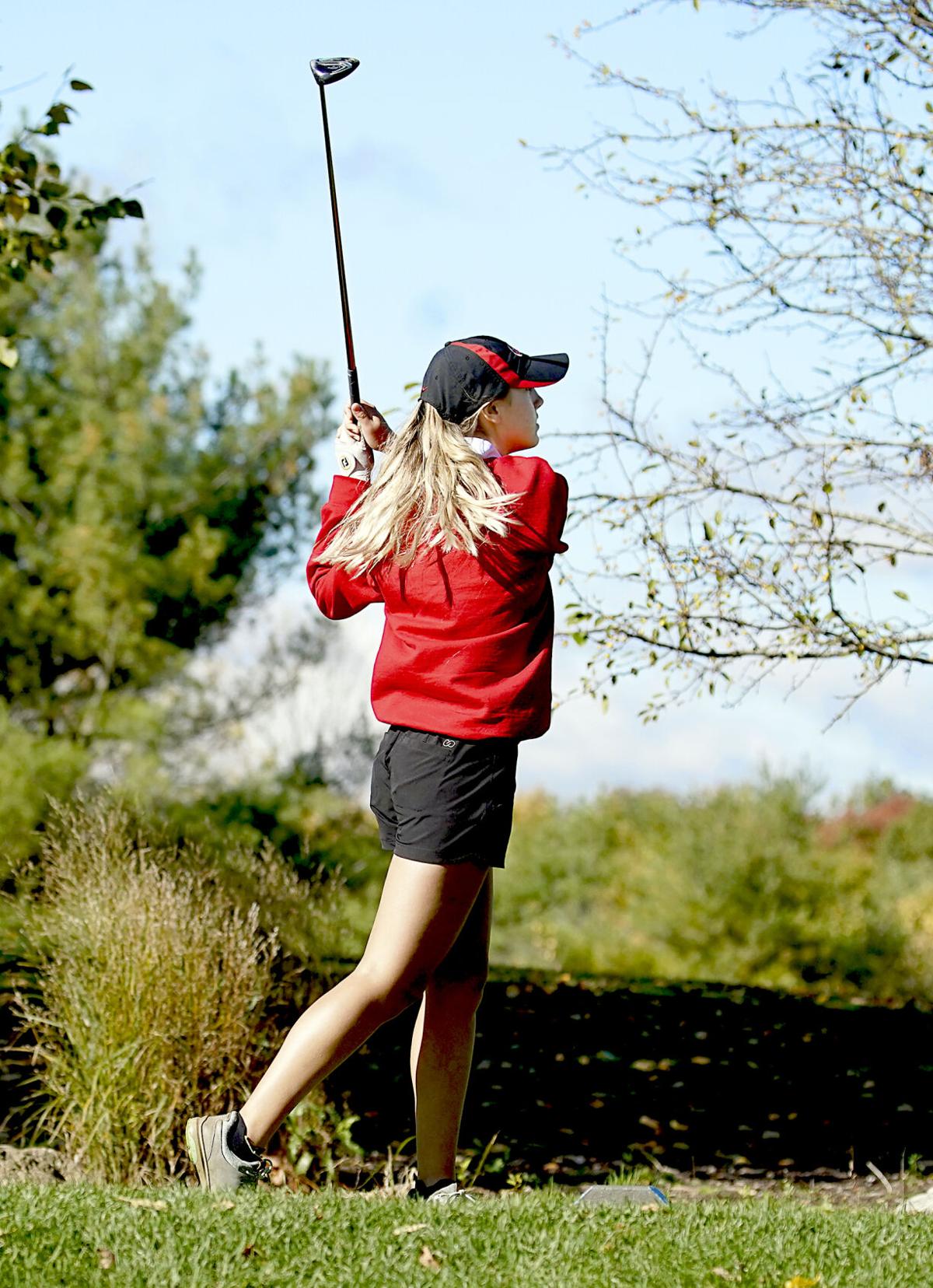 Chardon senior Cate Condon hits a tee shot during her 83-stroke round in the Division I Northeast District golf tourney Tuesday at Ellsworth Meadows.

Orange senior Dawson Goss follows his drive during his 85-stroke round in the Division II Northeast District golf tournament last week at Windmill Lakes in Ravenna.

Chardon senior Cate Condon hits a tee shot during her 83-stroke round in the Division I Northeast District golf tourney Tuesday at Ellsworth Meadows.

Solon sophomore Kaitlin Kormuth was the lone Lady Comet linkster with postseason experience, and she used that to her advanced to secure a state berth during the girls Division I Northeast District tournament on Tuesday at Ellsworth Meadows Golf Club in Hudson.

Competing as an individual, Kormuth got her round started with 40 strokes on the back nine of the par-71 course, before firing a tournament-best 35 on the front to finish in a three-way tie for third place in the 96-golfer field. She was bested only by Louisville senior medalist Katie Bice, 73 stroke, and Magnificat freshman runner-up Cara Heisterkamp, 74 strokes.

With the top four individuals not on a qualifying team advancing to states, Kormuth punched her ticket with 4 strokes to spare, as Kent Roosevelt junior Maren Seaholts claimed the last spot out with a round of 79.

Kormuth lowered her score by 11 strokes from a year ago, when she shot an 86 on the same course.

Also competing as an individual, Chardon senior Cate Condon finished 19th with an 83-stroke round, just 4 strokes shy of a state berth, after she shot a 96-stroke round at Ellsworth Meadows during last year’s district tournament.

Meanwhile, in the boy Division I Northeast District tournament on Monday at the Pine Hills’ par-72 course in Hinckley Township, University School finished eighth among 16 teams with 319 strokes, after capturing a sectional title the previous week.

Hudson senior Ben Basta was the tournament medalist with a 69-stroke round, while it took a 73 to make it out as an individual.

Competing as an individual, Solon senior Eli Rosner shot an 82 to finish 60th.

Not only did Hawken School sophomore linkster Ella Wong punch a repeat ticket to states, but she was the Division II Northeast District medalist along with Laurel School senior Jami Morris during last week’s tournament at Sable Creek in Stark County.

Wong and Morris both shot 4-over-par 75s to distance themselves from Beaumont junior Lauren Bangasser, who carded an 81-stroke round for third in the 71-golfer field. Wong had a tournament-best 35 on the back nine.

As a freshman last season, Wong shot a 77 on the same course, before going on to finish 17th at states with 81- and 80-stroke rounds at Ohio State University’s Gray Course in Columbus.

In the team standings, the Lady Hawks finished eighth with 405 strokes. It took a 389 to qualify for states.

Meanwhile, in the boys Division II Northeast District tournament last week at Windmill Lakes Golf Club in Ravenna, Orange finished sixth with 350 strokes and Hawken School was seventh with 352 strokes to end their campaigns in the 12-team field. It took a team score of 337 strokes to advance.

Cuyahoga Valley Christian Academy senior Caden Scarbrough was the tournament medalist with a 4-over-par 74. It took a 77-stroke round to advance as an individual.

The Gilmour boys carded 328 strokes from their low four shooters to finish runners-up, improving 4 strokes upon their performance from a year ago.

Junior Alex Swinarski led the Lancers with an 80-stroke round to finish seventh. He was just 2 strokes behind tournament medalists Charlie Belden, a senior from Canton Central Catholic, and Cory Gasaway, a senior from Mogadore, in the 54-golfer field. Swinarski shed 8 strokes off his card from 2019.

Heading to central Ohio for the two-day Division III state tournament this Friday and Saturday at Northstar Golf Club’s par-72 course in Sunbury, the Gilmour boys hope to better their sixth-place team finish from a year ago.