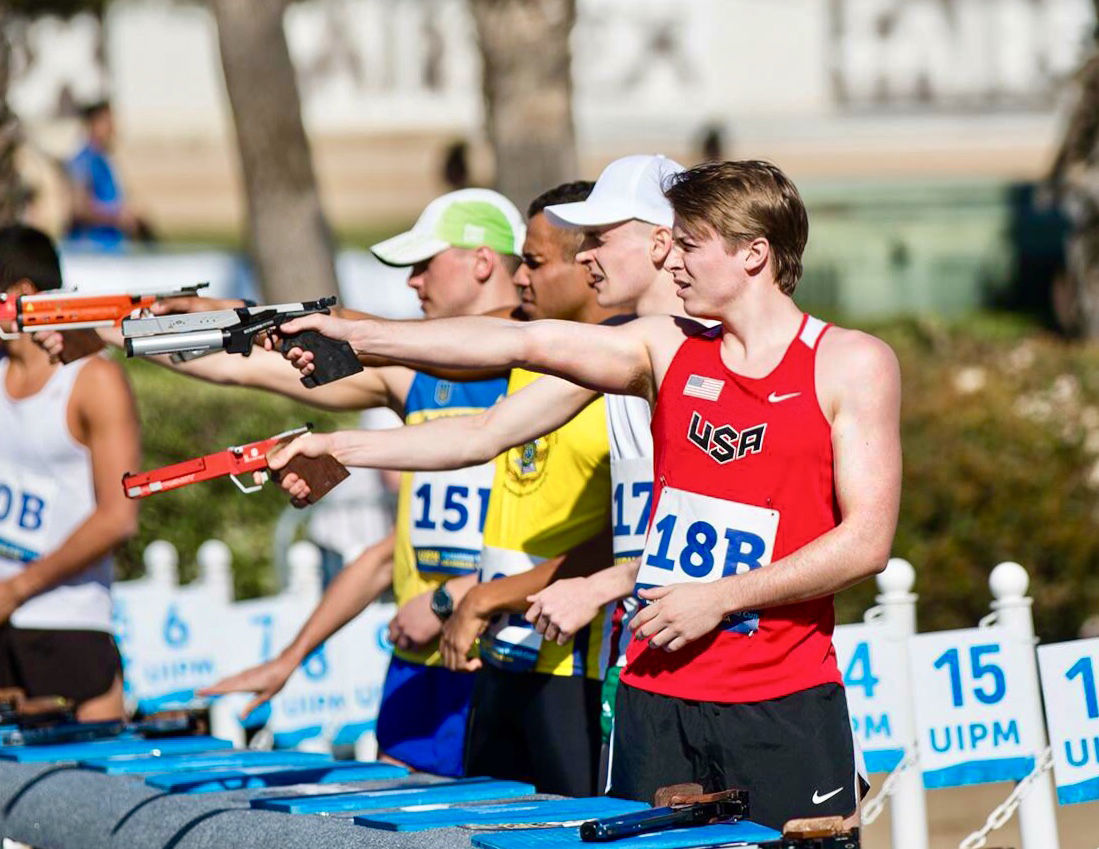 Sam Ruddock (right), a 2011 University School graduate, shoots his pistol during the laser run portion of the 2018 Pentathlon World Cup in Los Angeles. Training in a sport that also includes running, swimming, horse riding and fencing, Ruddock is an Olympic hopeful for the 2020 Games in Tokyo. 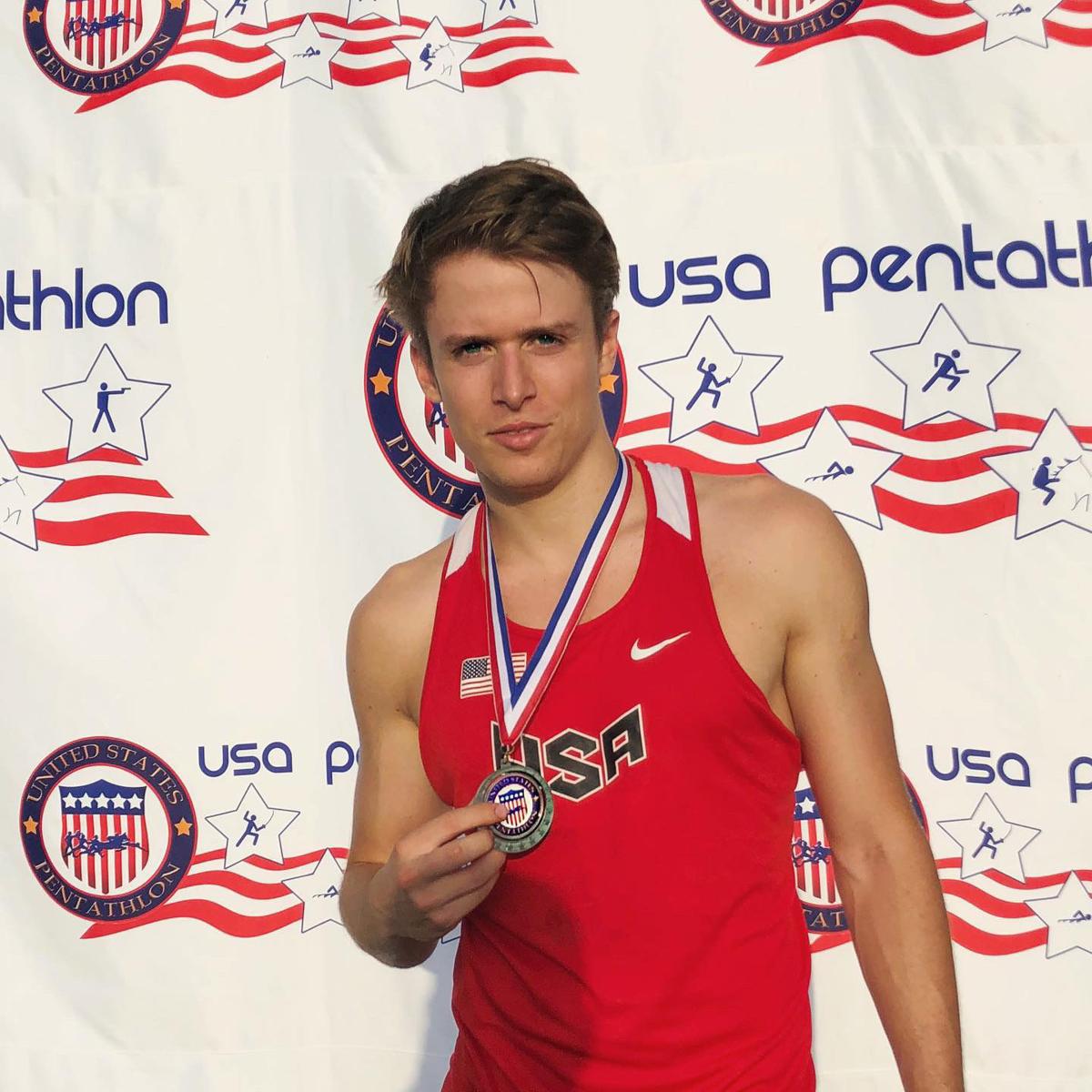 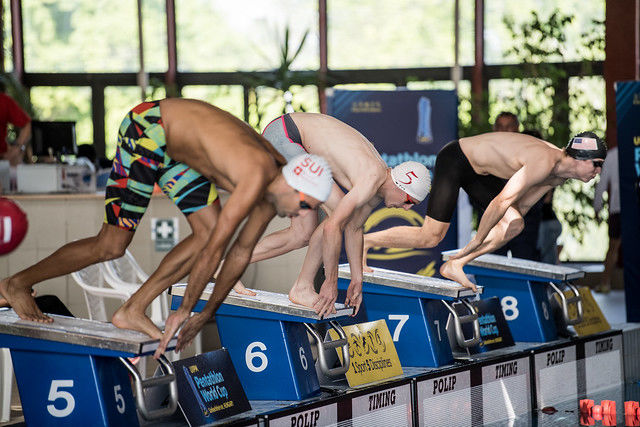 Sam Ruddock (lane 7) takes off the starting block for the 200-meter freestyle portion of his international pentathlon competition in Budapest, Hungary, earlier this year.

Sam Ruddock (right), a 2011 University School graduate, shoots his pistol during the laser run portion of the 2018 Pentathlon World Cup in Los Angeles. Training in a sport that also includes running, swimming, horse riding and fencing, Ruddock is an Olympic hopeful for the 2020 Games in Tokyo.

Sam Ruddock (lane 7) takes off the starting block for the 200-meter freestyle portion of his international pentathlon competition in Budapest, Hungary, earlier this year.

Sam Ruddock was a three-sport athlete in high school, but swimming under head coach Brian Perry was his specialty.

The 2011 University School graduate swam during the Prepper torpedoes’ four-year reign as Division II state champions from 2009 to 2012. He was a three-time state qualifier in the 100- and 200-yard freestyles, clocking 47.70 seconds and 1:44.38 as a double-podium finisher his senior season.

Ruddock also represented the maroon and black as a four-year varsity cross-country runner, as well as three seasons of varsity track and field, but he went on to pursue varsity swimming at Trinity College in Hartford, Connecticut.

Now 26, the Gates Mills native is entering his prime years as a 5-foot-10, 160-pound athlete and is using swimming as an avenue to motor toward a possible spot on the U.S. Olympic Team for the 2020 Games in Tokyo.

“It looks like I’m on track to make the team, knock on wood,” Ruddock said. “I just have got to keep my wits about me and have a good season next spring and early winter, because there’s only two spots, so it’ll be just two of us going.”

But it’s not just swimming that will propel him to Japan.

In addition to training for the 200-meter freestyle, Ruddock is also fencing, riding, running and shooting as an Olympic hopeful in the pentathlon – one of the 28 sports in the Summer Games.

Earlier this month, the University product finished runner-up with 1,425 points during the USA Pentathlon Men’s Individual National Championship in San Antonio, where he battled the Texas heat to come within 25 points of No. 1-ranked Sgt. Amro El Geziry, 32, a three-time Olympian who represented Egypt in the 2008, 2012 and 2016 Games.

El Geziry moved to the United States in 2014, when he married American pentathlete and Olympian Isabella Isaksen, became a citizen and joined the U.S. Army in 2017. He now trains in Colorado Springs, Colorado, as a member of the U.S. Army World Class Athlete Program.

While El Geziry is chasing a bid to his fourth Olympics, Ruddock didn’t start training full-time to become a world-class pentathlete until after he graduated college in 2015.

“I’ve been doing it since I got involved in high school, but I really couldn’t do it seriously until the end of college,” he said. “It’s been pretty challenging to balance all five (disciplines), but I’ve had some success with it recently, which has been great.”

Ruddock was introduced to the modern pentathlon by his dad, Jim Ruddock, who trained for the 1980 Summer Games in Moscow, when the United States, under President Jimmy Carter, boycotted the Olympics to protest the Soviet Union’s invasion of Afghanistan. Twelve years after the Soviet-Afghan War ended in 1989, the U.S. would end up invading Afghanistan.

Before the Summer and Winter Olympics split following the 1992 Games, most athletes had just one shot at making a U.S. team, because sponsorship and other financial support had yet to take off. The elder Ruddock entered the business world after the 1980 boycott.

“My dad introduced me to the sport,” the younger Ruddock said. “That’s kind of where I got my first taste of it. It was one of those things where I’d go out to a youth camp in Colorado and I’d start doing very well, and then, when I got back to it in college, I started finding that I had a real aptitude for it coming from a really strong running and swimming background.

“So, I started to focus on making the other three disciplines as strong as possible, mostly the fencing. That’s kind of the key of it, especially for me. But the interest came from my dad, initially.”

After college, Ruddock briefly moved out to the Olympic Training Center in Colorado Springs to join other top pentathletes and coaches before the 2016 Rio de Janeiro Olympics.

Now he lives in Manhattan, New York, where he trains full-time and works part-time for a consulting firm with his economics degree. He said the company he works for is accommodating toward his training and travel time for competitions.

“I think New York is just a better place for me in a couple of different areas of my life,” said Ruddock, who didn’t have much of a fencing background growing up but now trains with world-class fencers out of New York.

“That’s kind of one of the reasons I’m in New York, just because the best fencing in the nation is here and the national team is here,” he said. “I get to bout against Olympians and all the Olympic hopefuls that are trying to make a team. It turns out all of them are actually in New York right now, so that’s been fantastic for me.”

Ruddock finished fourth in fencing during the USA national championship earlier this month in San Antonio, winning about 68 percent of his bouts to pick up 245 points. But it was in that discipline that champion El Geziry, 292 points, created the most separation from Ruddock.

Ruddock’s best discipline, compared to his competition, actually came in riding, when he finished in a five-way tie for first to gain 300 points. The riding component of the modern pentathlon includes a jumper horse competition with 15 fences, triple or double, that are anywhere between 3 1/2 and 4 1/2 feet.

Pentathletes aren’t allowed to bring their own horses to competition, and they are randomly assigned an animal they’ve never ridden before and have five to 10 minutes to warm before going out on the jumper course.

“I actually had a pretty tough horse. I was just able to get him around pretty well,” Ruddock said. “The guy that rode on my horse first actually fell off the horse, and then I had to ride him and, thankfully, got him around clean.”

If pentathletes go over the allotted time to finish, knock down rails, go off course or get a refusal from their horse, they are penalized.

“It can be fairly technical,” Ruddock said. “The first time I was on a horse I was like 17 and did it once. Then when I started liking it a bit more a few years later, I kind of found out that I had a talent for it, because it’s really just if you’re athletic and have a great sense of balance and you can communicate with the horse well, you can pick it up easily. So, I was able to catch on pretty quick.”

When Ruddock is back in Northeast Ohio, he likes to ride at the White North Stables out of Hunting Valley to keep sharp, he said.

Going back to his swimming background at University School, Ruddock was teammates with program greats like 2008 graduate Sean Evans, 2009 graduates Ian Stewart-Bates and Tyler Bailey and fellow 2011 graduates Andrew Malone, Mike Gaudiani and Ben Stewart-Bates, four of whom were individual state champs.

“It was great to be a part of it, and I still think about that as one of the best overall teams,” Ruddock said. “It was a great culture. And that culture, as I found out, is the same thing that permeates between excellence in college sports and right now in the Olympic movement. You still have to have the same type of culture that promotes hard work and no excuses and getting after what you want.

“And my close friends are still a lot of those guys from that swim team. I always think about keeping that level of excellence throughout whatever I do. The principles are the same.”

In the laser run, which combines the running and shooting elements of the pentathlon, Ruddock completed a 2-mile course with four laser pistol shooting stations, which require athletes to hit five 2-inch targets from 10 meters out at each station, in 12:10.00 for 570 points.

The laser run has a similar objective to that of the biathlon, a winter Olympic event that combines cross-country skiing and rifle shooting.

“My mile time is around 4:20ish, so, ideally, I’m a bit faster than that,” Ruddock said of his performance in San Antonio. “But I made a couple mistakes the first two shooting stations and fell back into third, but I have really good closing speed and was able to make up that ground and stay within striking distance that last 800 meters and then kind of bring it home.

“And shooting is one of those things where you’ve always got to practice it every day. It really comes down to who has a better eye and steadier hand. I mean, your heart rate is probably 160 beats a minute.”

As a pentathlete for Team USA, Ruddock has competed at international competitions in Cairo, Prague, Moscow and Budapest, Hungary.

But his big prize would be a trip to Tokyo for the 2020 Games, he said.

“But last week (in San Antonio) was a bit of a breakthrough, because I knew I was good at swimming, or I’ve done some great fencing work, but I’d always make a small mistake or an error here that pushed me back. But last weekend kind of proved to me that I can put it all together and be a top-two guy in the nation.”