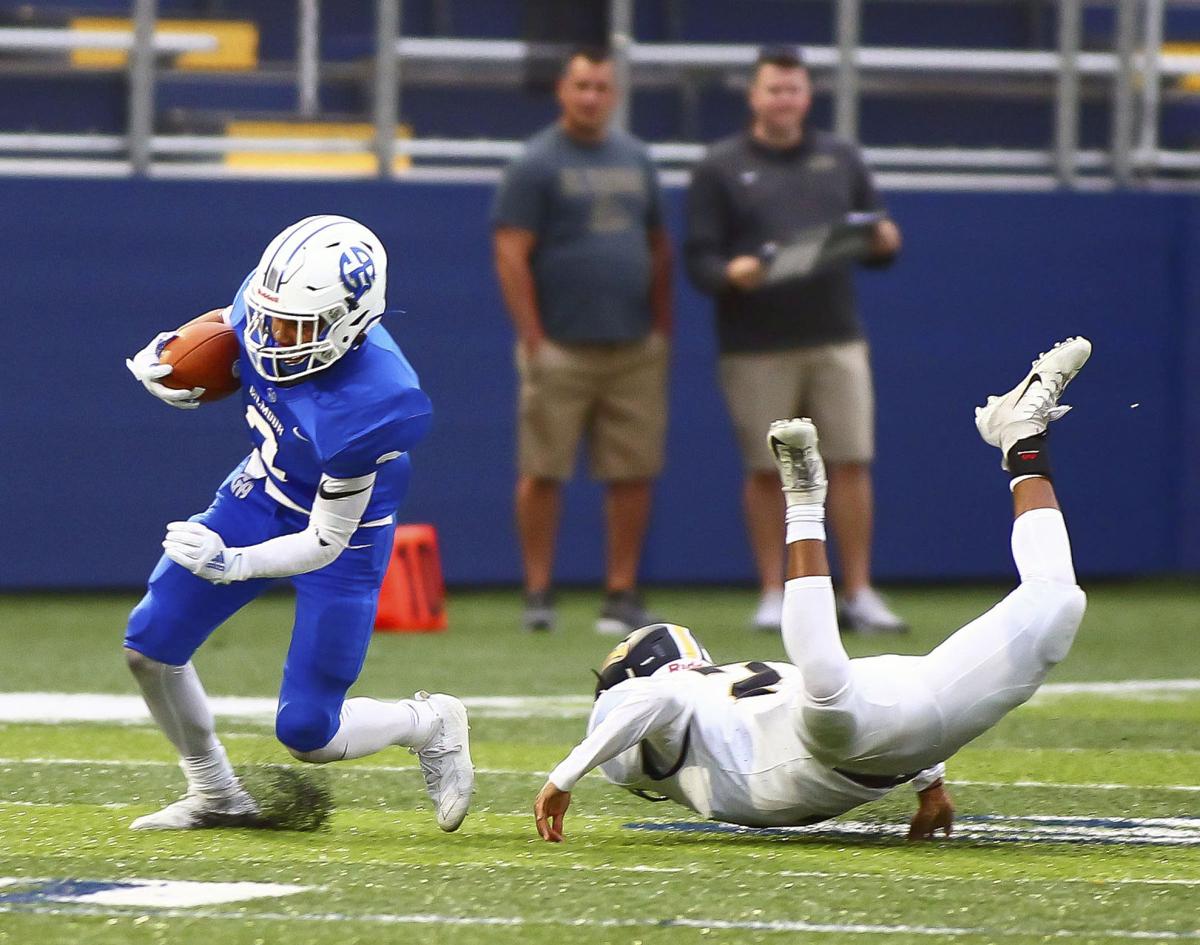 Gilmour Academy 165-pound senior running back Connor Krebs dodges a flying, face-planting Ka’Shawn Thompson during his 140-yard rushing night in the Lancers’ overtime loss, 28-21, in a season opener against St. Thomas Aquinas on Saturday at DiBiasio Stadium in Euclid. 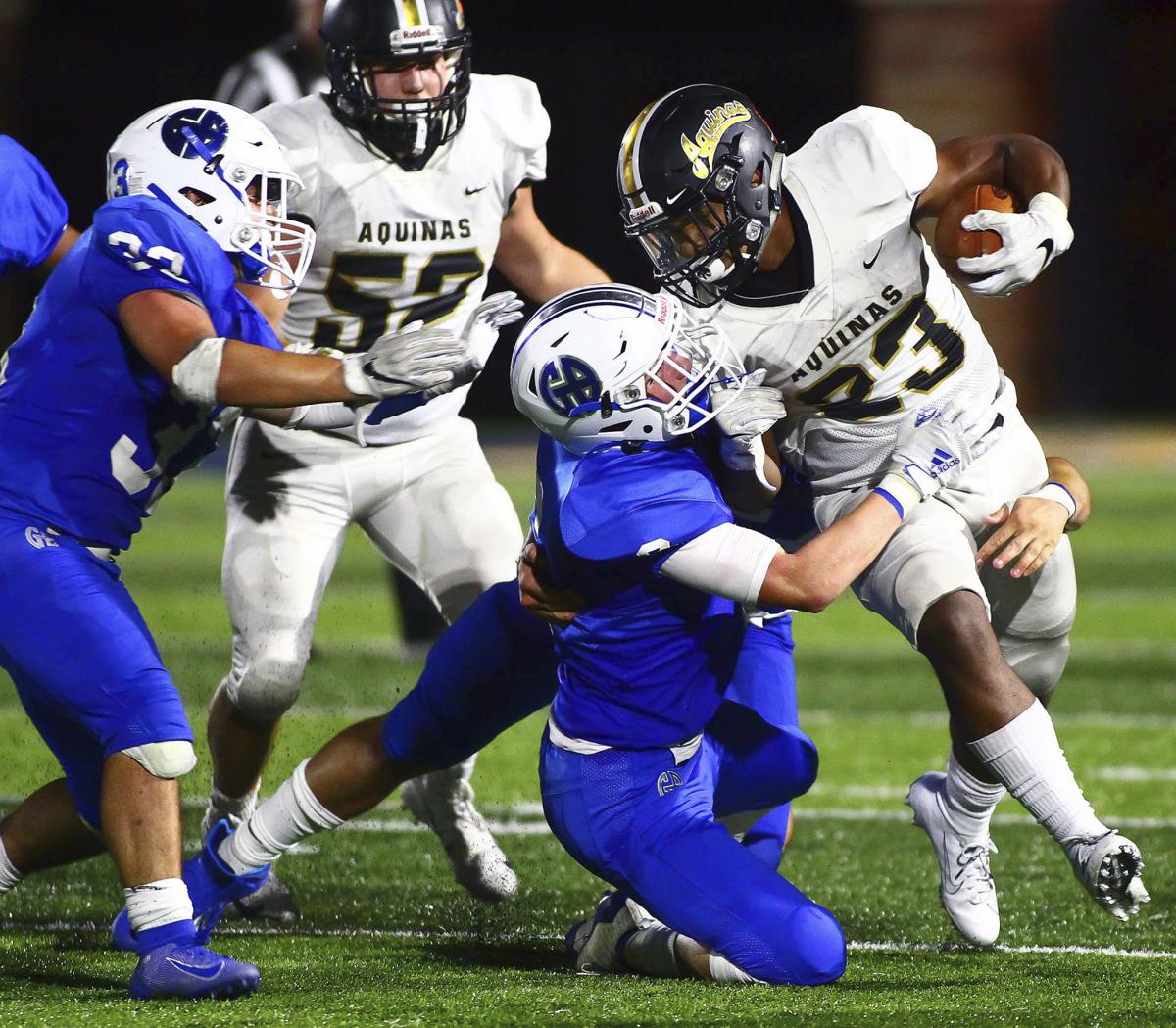 Gilmour Academy 165-pound senior running back Connor Krebs dodges a flying, face-planting Ka’Shawn Thompson during his 140-yard rushing night in the Lancers’ overtime loss, 28-21, in a season opener against St. Thomas Aquinas on Saturday at DiBiasio Stadium in Euclid.

University School posted its first shutout victory in eight years, 34-0, and it was no fluke when the Preppers hosted Division IV Warrensville Heights on Friday afternoon at Scovil Field in Hunting Valley.

With eight returning starters on defense, the maroon-and-black gridders held Warrensville to 57 net yards of offense and three first downs on 12 possessions with 32 plays for the visiting Tigers.

Not to mention, University turned over Warrensville five times – two fumbles and three interceptions – to close off the end zone entirely for the first time since a 68-0 thumping of Lakeside in 2011.

“For us to do that, it was more than simply playing well for a quarter of the game,” fifth-year head coach Ben Malbasa said. “You have to play well the whole game. And, in many cases, it meant substitutes coming in and playing well. You know, we had a few younger guys get on the field and make some plays in the second half that kept it a shutout.

“Math Bossick, one of our junior linebackers, recovered a fumble. So, plays like that were really exciting in a sense that we have a little bit more depth than we’ve had.”

While Warrensville has some fast cats, so too does University School with its all-senior veteran secondary of Charlie Brennan and Jack Borrow, who both had interceptions, as well as Cam Gable and Max Young, who eliminated chunk plays.

“I think part of it too is we had a really aggressive pass rush, and the quarterback put the ball up a couple times in some bad spots,” Malbasa said. “And it’s hard to throw a football under pressure. That’s the single most true thing I can think of in football.”

On the other side of the pigskin, University amassed 323 yards, including 247 rushing, to score five touchdowns, all of which came from inside the 10.

Senior running back Dylan Loconti, who finished with 23 carries for 138 yards, put the Preppers on the board with a 4-yard touchdown run, and then 210-pound junior Khari Tidmore found pay dirt on a 7-yard carry to put the Preppers up, 14-0, at the quarter mark.

In the second frame, junior quarterback Ricky Radtke scored on a 2-yard keeper, and Loconti punched in a 1-yard rush for a 28-0 upper hand at the break. And junior Nick Flowers enacted a running clock on a 3-yard touchdown run in the third quarter for the eventual 34-0 final.

“We had some drives that were three or four plays, and we had some eight-to-10-play drives,” Malbasa said. “We didn’t hit the big one on them, and, obviously, that’s something that us as coaches, we’ve got to find more ways to generate those chunk plays, because, in the long run, the ability to generate those 20-plus-yard plays is really what determines a football game.”

Gilmour Academy football was perhaps one defensive stop away from an overtime victory during the Lancers’ season opener against Division VII St. Thomas Aquinas on Saturday night at Euclid’s DiBiasio Stadium.

But Hawkins broke into a scramble on the ensuing play and tossed a 32-yard touchdown strike to senior receiver Robbie Mitchell for the 28-21 lead. Gilmour came up empty on its possession for the loss.

“It was hard. It was hard to finish a game like that,” Gilmour fifth-year head coach Chris Kosiorek said. “But, basically, it’s just, you have to play every play. The key thing is the emphasis in understanding where you’re supposed to be. We had a great defensive stop, but then we let the receiver get behind us, and that’s just hard to accept. But the kids played a great game overall. Defensively, I thought we played very well.”

Although the score was stuck at 21-21 at the end of regulation, Gilmour’s defense only surrendered one touchdown up until that point, which happened to be with 1:22 remaining in the game to allow the overtime.

St. Thomas’ other two scores came on pick-six interceptions for a 7-0 lead at halftime and a 14-7 lead midway through the third quarter.

Offensively, Gilmour got on the board thanks to the complementary play of veteran junior defensive lineman Jimmy McCrone, who collected an interception and returned it 24 yards down to the 1-yard line. Lancer 6-foot-2, 190-pound sophomore quarterback Thomas Richardson punched it in to tie the game, 7-7, with 8:22 remaining in the third quarter.

Later in the frame, Gilmour freshman speedster Santino Harper returned a kickoff 85 yards to the house to knot things up at 14.

“Santino is a special young man, he got a crease, and he’s got great speed, and he just made one guy miss, and I think it was 85 yards,” Kosiorek said. “It was at a crucial time. Up until then, the only points (St. Thomas) had put on the board were two defensive touchdowns. So, that obviously helped us a lot.”

Gilmour then took a 21-14 lead with six seconds left in the third, when senior running back Connor Krebs, who finished with 10 carries for 140 yards, found pay dirt on a 53-yard touchdown run behind the blocking of junior Michael Snelling.

But when the game was on the line in overtime, the Lancers came up empty.

“Offensively, we’ve got to figure some things out and put points on the board,” Kosiorek said. “That’s just something we’ve got to get better at, starting tomorrow.”

Richardson finished five-of-20 passing for 75 yards in his debut at quarterback, with three of his completions going to polished senior receiver Nathan Reichard for 66 yards. Gilmour finished with 260 yards overall.

The good news is that Hawken School football showed some exciting promise from a pair of young skilled guys in its offense, but the Hawks still lost their season opener against Garfield Heights Trinity, 48-20, on Friday night in Bedford.

Sophomore quarterback Terrence Robinson completed 22 of 41 passes for 207 yards with three touchdowns and one interception in his debut for the Hawks, while 115-pound freshman running back Dominic Johnson had 28 carries for 109 yards and 10 catches for 98 yards.

Overall, Hawken moved the pigskin 349 yards on 77 plays, but its defense couldn’t keep the host Division V Trojans out of the end zone. Trinity amassed 473 yards on 45 plays.

Trinity took a 20-0 lead with 3:48 to go in the first half, with senior kicker Mitchell Knotek splitting the uprights on 27- and 40-yard field goals, before Hawken could get on the board with Robinson’s 20-yard touchdown toss to Johnson to cut the deficit, 20-6, before the break.