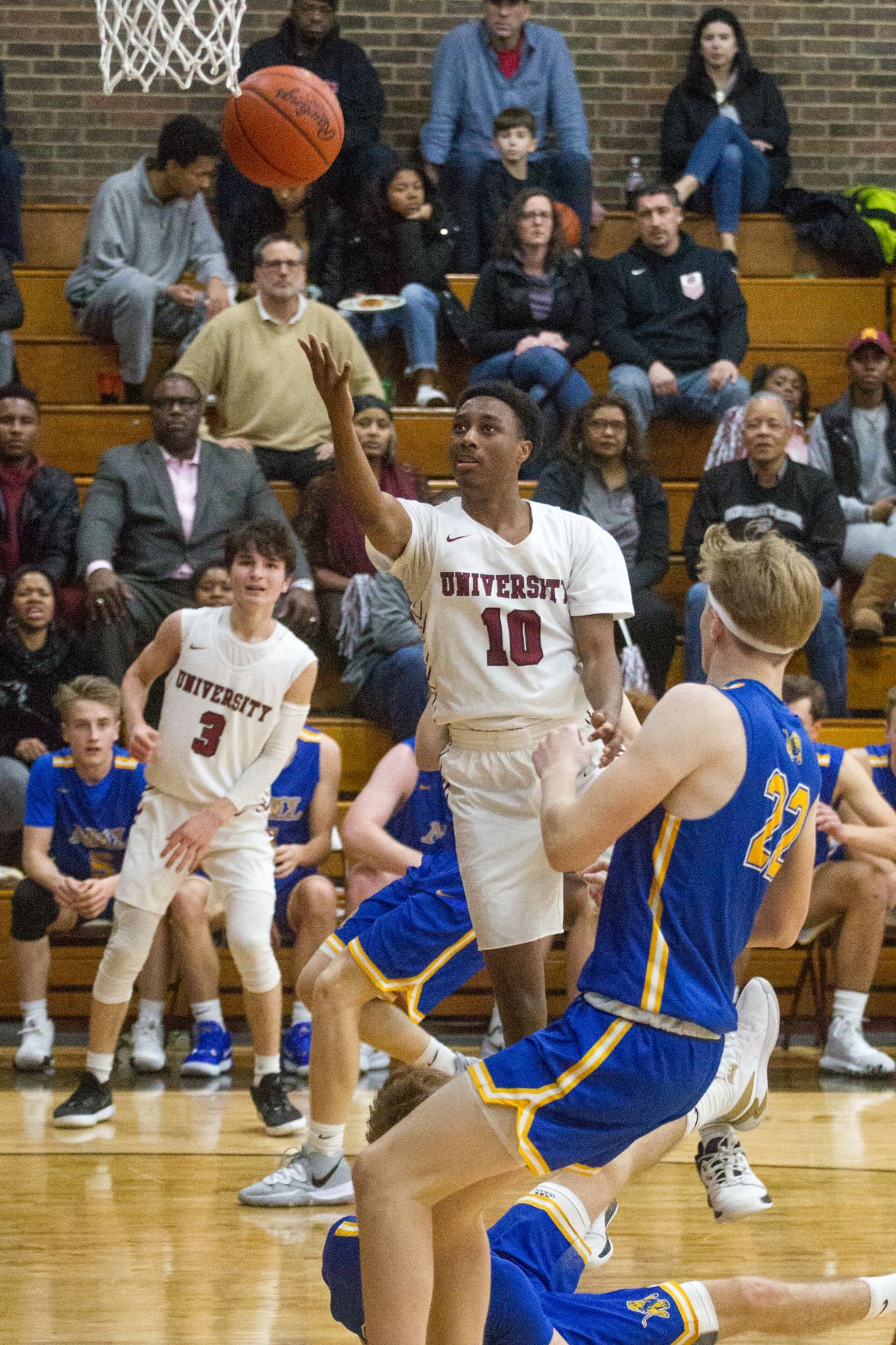 University School 6-foot junior Cam Smith leaps toward the bucket for a finger-roll during his 12 points in the Preppers’ 63-55 home win against Notre Dame-Cathedral Latin on Friday night in Hunting Valley. 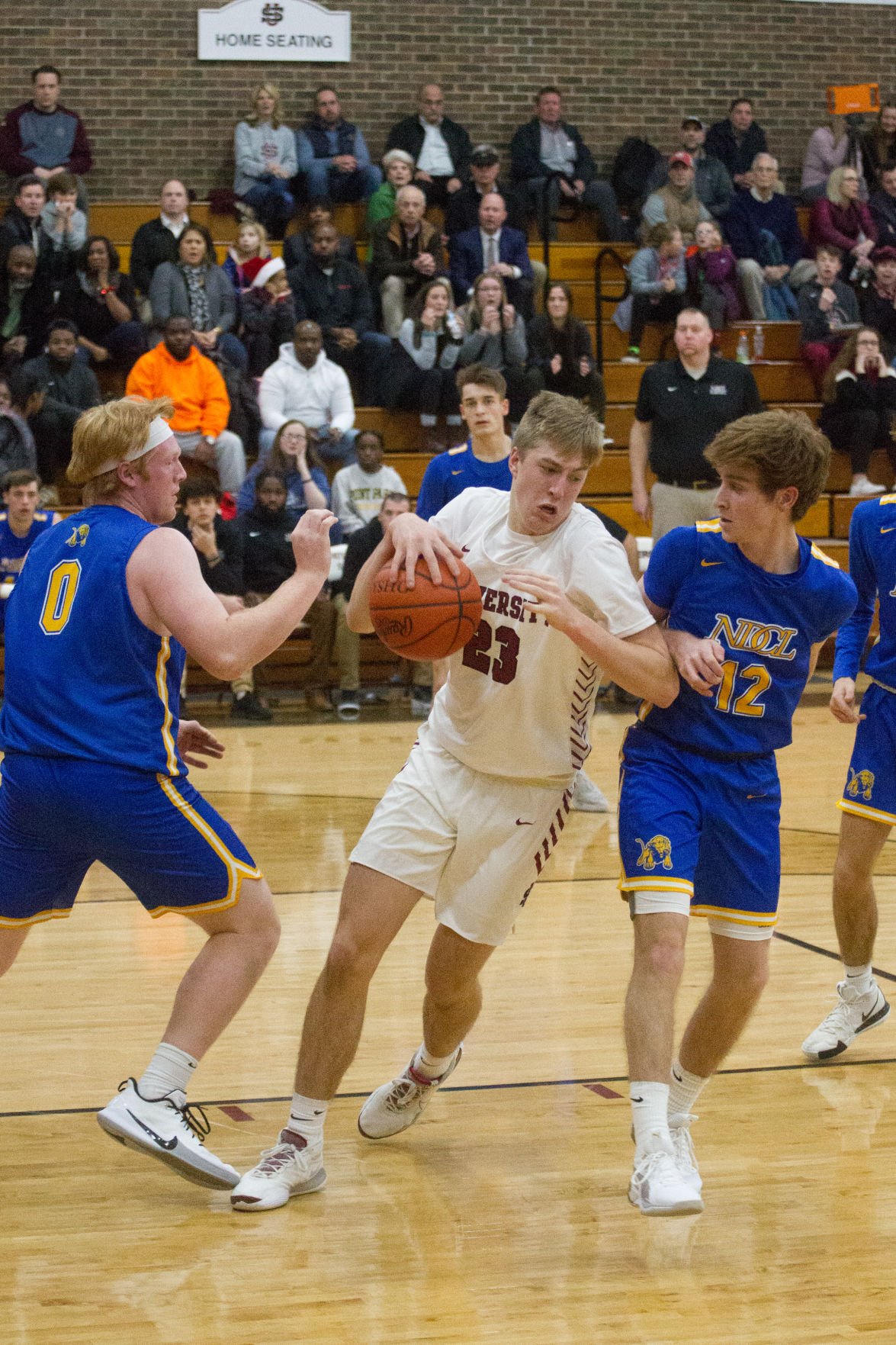 University 6-foot-6 senior Ricky Radtke finds open space against a pair of Lions during the Preppers’ home win on Friday. 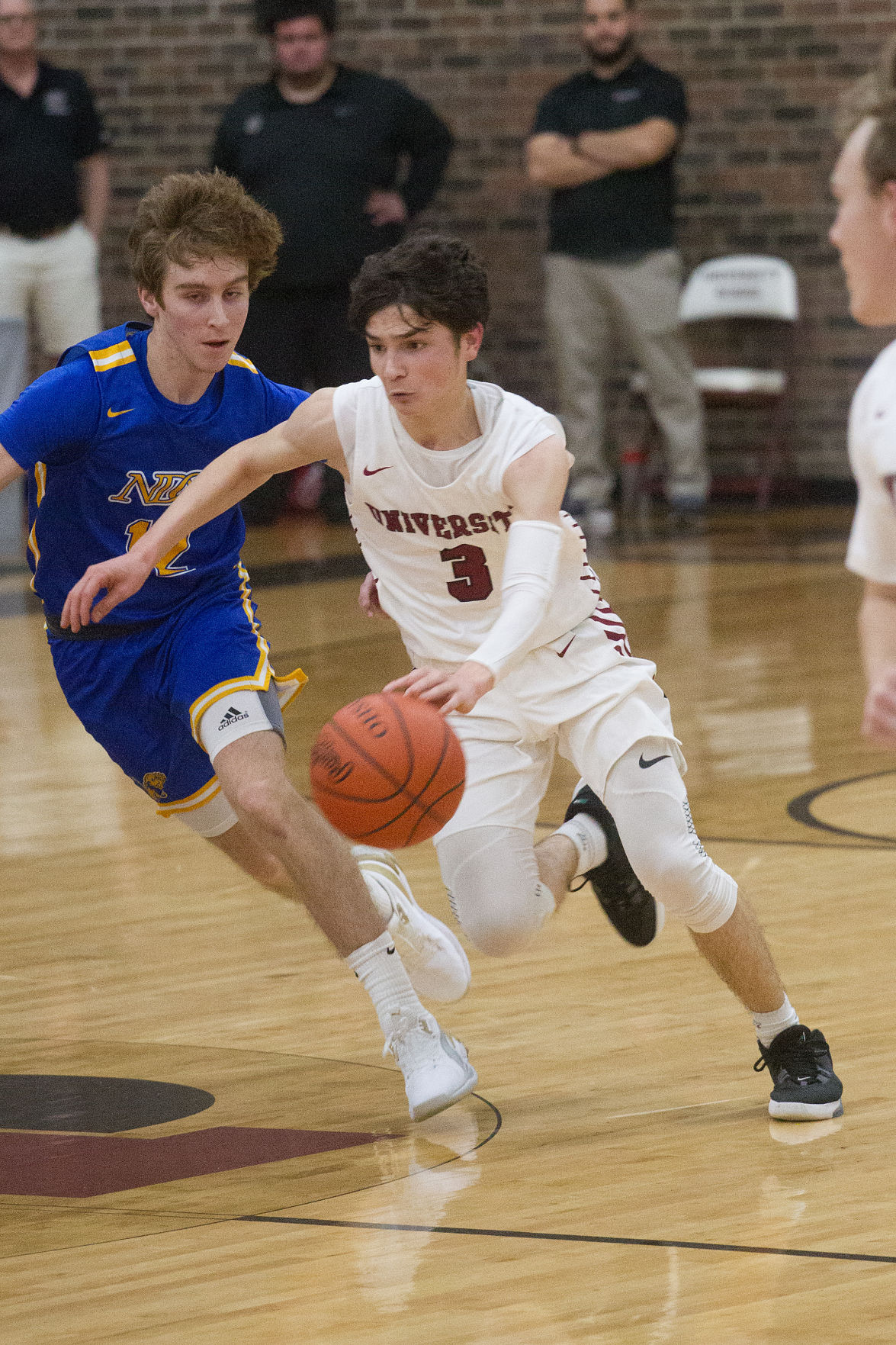 University School 6-foot junior Cam Smith leaps toward the bucket for a finger-roll during his 12 points in the Preppers’ 63-55 home win against Notre Dame-Cathedral Latin on Friday night in Hunting Valley.

University 6-foot-6 senior Ricky Radtke finds open space against a pair of Lions during the Preppers’ home win on Friday.

If Notre Dame-Cathedral Latin was going to keep dropping 3-pointers, the host University School cagers were going to have a difficult time pulling away on Friday night at Weatherhead Gymnasium in Hunting Valley.

The Preppers opened the boys hoops battle with a 7-0 lead, highlighted by 6-foot junior Cam Smith’s trey and 5-foot-9 junior guard Faris Dahman’s coast-to-coast layup off a steal, but NDCL came back and hit three triples to tie the game, 12-12, at the quarter mark.

Lion 6-foot senior Frank Martin found the bottom of the barrel from downtown, 6-foot-4 senior Sam Urbanski spread the floor on his trey, and then the bank was open late for Martin on a 30-footer at the buzzer.

University’s rotation of seven juniors and one freshman knew it was simply a matter of converting high-percentage looks to get the separation the Preppers wanted heading into the second quarter, fourth-year head coach Sean McDonnell said.

“I think we started off the game on a nice run and we probably left some plays on the table,” he said. “We had a few opportunities to capitalize on that we didn’t. To NDCL’s credit, they made some plays to close the gap. And I thought at the end of the first quarter that we had played well enough to have a lead, and we didn’t have one.

“So, we sort of just had to keep pushing and keep grinding. As the game rode on, we certainly found ourselves in a pretty good spot.”

Behind Dahman’s hot shooting, the Preppers outscored NDCL, 28-15, in the second quarter to take command of a 40-27 lead at the break. Dahman would finish with a game-high 23 points and a trio of 3-pointers on his resume.

“He had a big second quarter,” McDonnell said of Dahman. “We were thinking we needed to get him out, only because, with so much energy from the crowd, I think our guys were hitting the point of exhaustion. But (Dahman) kept making so many big plays in the second quarter that led to us opening up the lead. So, we left him out there, and, to his credit, he just kept playing well.

“He made threes; he got to the basket; I think he might have been eight-for-nine from the free-throw line. So, he scored in a variety of ways. But he’s a really special player, and he gets others involved as well.”

After NDCL hit those three triples in the first quarter, the Lion cagers tossed up more bricks than the interior walls of University’s gymnasium. By the night’s end, NDCL shot six-of-29 from downtown.

“We just wanted to really be the aggressor and try to make the game as uncomfortable as we could for NDCL,” the coach said. “They’ve got guys that are really nice shooters. Some of their forwards are really good shooters. But we thought, if guys were tired, shots that maybe they would normally be comfortable taking, maybe they would be a little bit more difficult against us.

“So, we certainly didn’t have a mindset that we needed to force them to shoot outside shots, because I think they can. We just wanted the game to be as uncomfortable as possible, and I think we did that for enough of the game.”

In addition to Dahman’s playmaking second quarter, Smith drilled his second three of the game and also went coast-to-coast on a steal for five of his 12 points in that frame, and then Smith also dished out a scoop assist for 6-foot-6 junior Ricky Radtke to throw down with a two-handed jam.

Radtke also got the home crowd going when he posted up a Lion big at the top of the key, handed off an overlap pass to Dahman, who took two dribbles toward the paint to lull three Lion defenders to sleep and then popped an alley-oop to Radtke for that previously mentioned 60-41 lead in the fourth quarter.

University has two other fully capable 6-foot-6 guys coming off the bench, junior Zion Durden and freshman Nelson Johnson, but Radtke, who finished with a dozen points against NDCL, has been a star attraction for the Preppers through four games.

“(Radtke) is a special talent,” McDonnell said. “He’s almost 6-foot-7. He can shoot, dribble and pass, and he’s a really skilled basketball player. And around the rim, he’s really bouncy and has got a number of highlight dunks this year, as well as some really pivotal blocked shots and key rebounds for us. So, he’s really an epitome of an inside-outside player at both ends of the court. He’s a really important piece for us, that’s for sure.”

With physical maturation, Radtke is averaging two dunks a game when he maybe had two dunks all of last season, McDonnell said.

In addition to double-digit scoring efforts from Dahman, Radtke and Smith, University’s starting lineup was padded at the offensive end with five points from 6-foot-2 junior Asaan Snipes-Rea and four points from 5-foot-11 junior Sean Scadlock.

With final exams this week, University hoops won’t be back in action until the Preppers host East Cleveland Shaw at 2 p.m. Saturday in Hunting Valley.

The maroon-and-black cagers’ lone loss so far this season was against reigning state final-four St. Edward (4-0), 95-48, whom many sports writers consider the best Division I team in Northeast Ohio.

“Our first four games I think have showed us that when we play well, we’re pretty good,” McDonnell said. “I mean, we have athleticism. We have depth. We’re skilled. We can score. We’re good on defense. And when we play poorly, like we did over at St. Ed’s, then we can get stumped.

“So, I think, as much as anything, what we need to do is concentrate on us and do the best that we’re able and live with the results. And I think we’re off to a nice start. Our team has high expectations.”