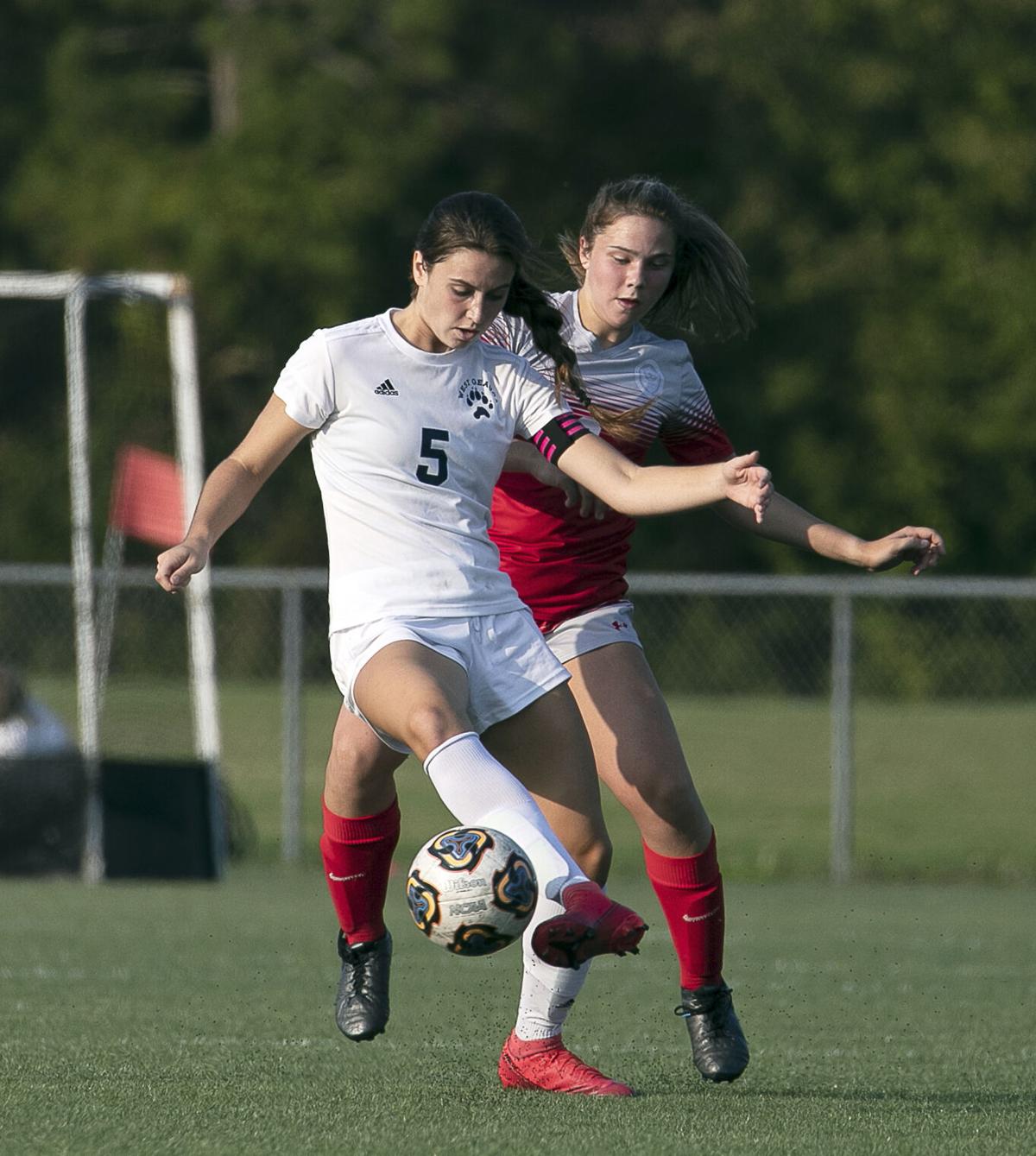 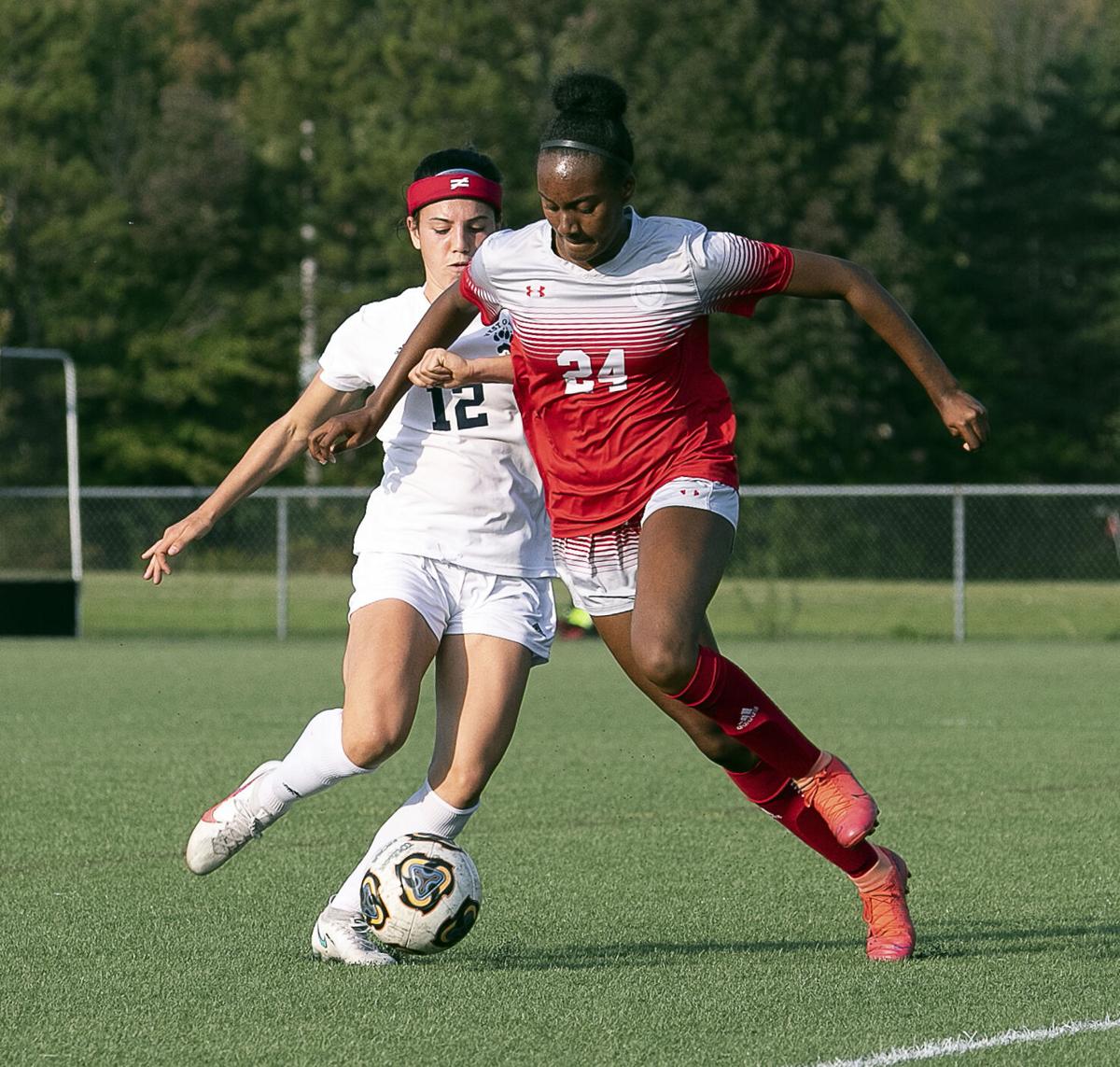 The Lady Wolverines were doing quite fine, with a trio of 3-1 victories against regional regulars Notre Dame-Cathedral Latin, Chagrin Falls and Lake Catholic, losing only a 2-1 battle against reigning Division II state runner-up Mansfield Madison.

But the first-team all-Ohioan only had one goal to show for after burying 30 tallies during a 15-3 campaign a year ago. As expected, Ehrbar didn’t stay quiet for long.

“I’ve actually changed positions,” Ehrbar said. “So, I started off the season as an attacking center mid. And that was great, but it was slightly different, because I felt like there was a lot of pressure on the inside there, we were still working out some of the kinks and that was just a different position for me.

“And, so, Kori (Jesenovec) moved me to the outside. So now I’m more playing up in that attacking third on the outside but also able to come and shift in towards the middle. I think being outside has allowed me to have my own space and change up my play.”

Over the course of the West Geauga girls soccer team’s next four games, Ehrbar was a wrecking ball with 10 of the Lady Wolverines’ 11 goals, including three hat tricks, beginning with a 3-1 result against returning district champion Mayfield on Sept. 14.

The Lady Wolverines still had yet to shut a team out after five games, but then they had three clean sheets in row with a 1-0 result against Division III state No. 5-ranked Kirtland (8-1-2), a 4-0 victory against Aurora and a 3-0 road blanking of Hawken School last Thursday.

“We knew that was going to be a big game,” Ehrbar said of Kirtland. “It always is, and it was great to be able to pull out that one-nil win, just because it shows that, in a tight game, in pressure, we can handle being up and not letting the other team score. So, that was a great win and definitely a great battle.”

West Geauga’s lone tally in that affair came after sophomore forward Frankee Flesher was taken down in the box in the third minute of play. Ehrbar capitalized on the ensuing penalty kick.

The Lady Wolverines’ defense of senior center back Aubrey Zanella, sophomore center back Megan McGinnis, junior Shannon Swinerton and sophomore Zoe Cowles limited the Lady Hornets to just four shots, opening the door for sophomore keeper Ashlyn Drayer to get the win between the posts.

“I think we have people in the back who really know the game and are very versatile players,” said Zanella, who’s the main defensive piece returning from 2019, after Bella Burkhand, Emily Allegretti and Madison Allegretti graduated from the back line.

“So, it was a bit of a change to try and figure out the lay of the land back there,” she said. “(Against Kirtland), I think it took a lot of patience and a lot of self-control, because we just had to calm down and possess the ball, and we were able to use Ashlyn as an outlet back there too.”

Against Hawken School last Thursday, another defensive struggle ensued with a 0-0 score at halftime and each team getting two shots on goal through 40 minutes.

The Lady Hawks, who got a late start to their season, entered the match with a 1-0 record after beating a 6-4 Berkshire team by a 1-0 result the previous week.

“I think, through the first half we were a little frustrated, because we couldn’t get into their box at all, because they did have a lot of players back,” West G senior holding midfield Bailey Zanella said. “So, I think we just took a step back at halftime and realized what we had to do and the goal we had to accomplish. And we figured out a new game plan to ultimately come out with that win.”

Zanella said the Lady Wolverines didn’t play as direct as they normally would and stretched the pitch wide with Flesher to open up the middle for Ehrbar.

“Frankee had a big impact,” Zanella said. “She allowed us to work wide and bring our strengths through the outsides, and I think that helped a lot to open up the game. I think she allowed us to play at a faster pace too.”

The floodgates opened for another Ehrbar hat trick in the second half.

In the 47th minute, the West Geauga all-Ohioan found the back of the net on a chip shot off an assist from Bailey Zanella.

“The goalie was out a little farther, so it was almost like a chip shot that just laid into the back over her head,” Ehrbar said. “I was in front of the line when I got the ball, and I think we had swung the ball outside to Frankee, and then she had played it back to Bailey, and then Bailey was able to touch it to me, and we were able to score from there.”

Ehrbar hammered another one home a minute later off a cross from her younger sister, Rae Ehrbar, a junior who starts at center mid.

While the younger Ehrbar doesn’t have any tallies to her name so far this campaign, she’s been the chief distributor with eight assists for the Lady Wolverines.

“I just loving playing with her, because I feel like we have a connection where I know where she’s going to play it, and she knows where I’m going to run. It’s hard to defend.”

The elder Ehrbar put Hawken to bed on her hat-trick tally in the 70th minute, which came in the flow of transition play, when she unleashed a lefty rocket from 30 yards out that hit off the top of Hawken senior goalie Amalia Blood’s fingertips and into back of the net.

That was the Lady Wolverines’ sixth straight win, improving their record to 7-1 with a 3-0 mark in the Chagrin Valley Conference.

On Monday, West Geauga’s streak came to end in a 1-0 home loss against Division I Mentor under rainy conditions at Howell Field.

Mentor’s tally came on a give-and-go through ball up the center of the pitch, with Emma Potter splitting a pair of West Geauga defenders and getting a shot off a sliding Drayer at the top of the box that trickled home in the 33rd minute.

The Lady Hawks, meanwhile, rebounded with a 3-1 victory against Madison on Saturday and a 1-1 stalemate against Shaker Heights on Tuesday evening, moving their record to 2-1-1.