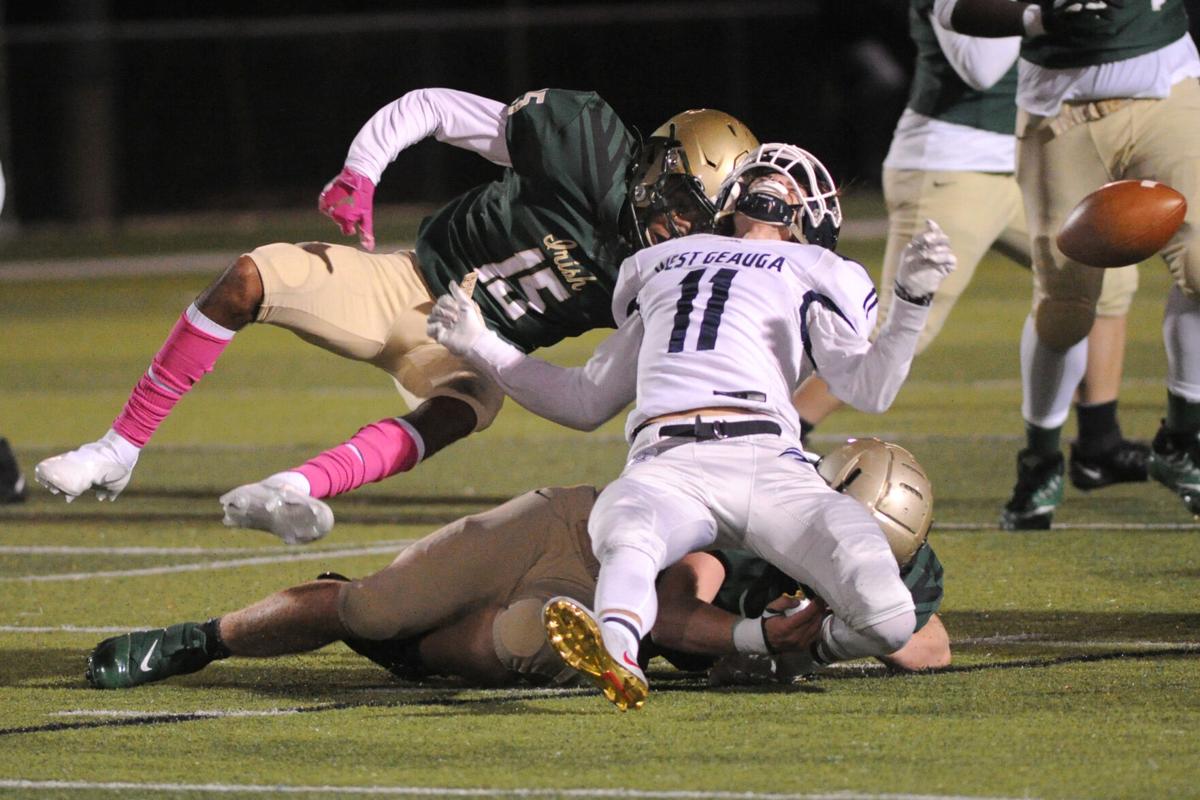 West Geauga 6-foot senior safety Luke Musser (No. 11) loses a fumble after making an interception – his sixth of the season – during the Wolverines’ road playoff loss against St. Vincent-St. Mary, 48-6, on Friday night in Akron. 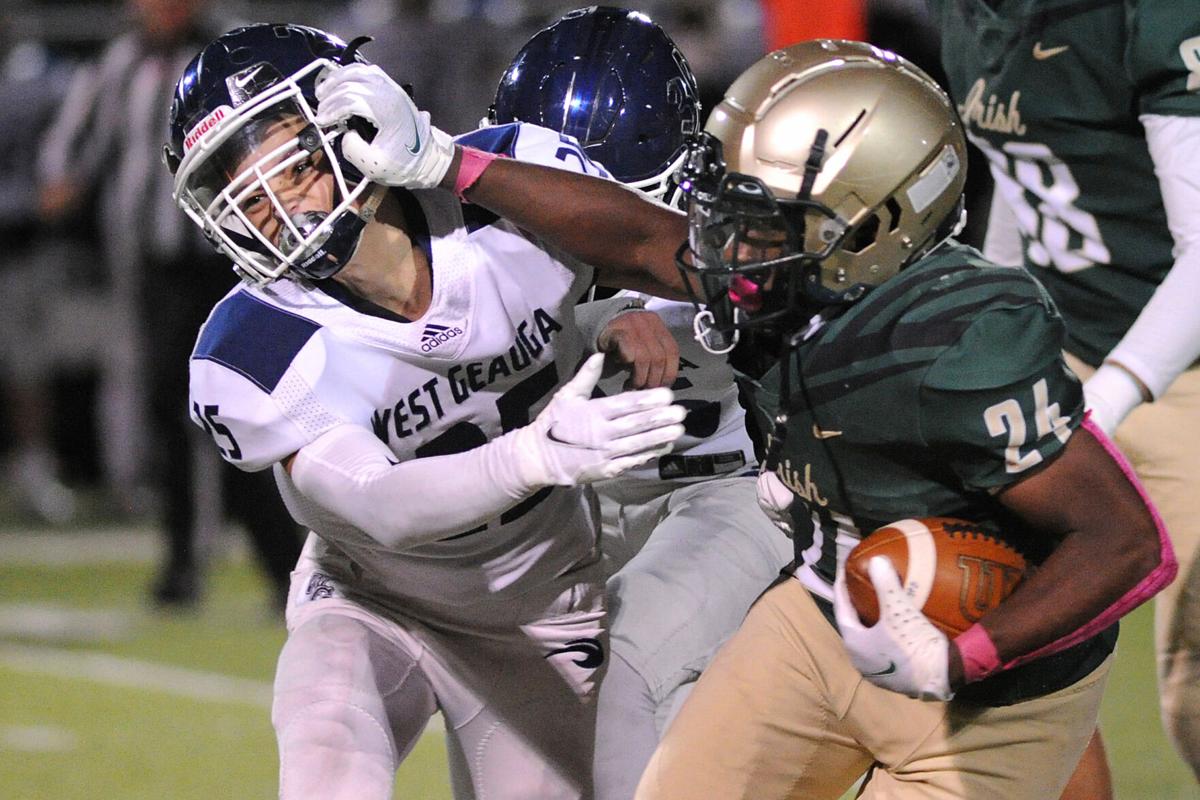 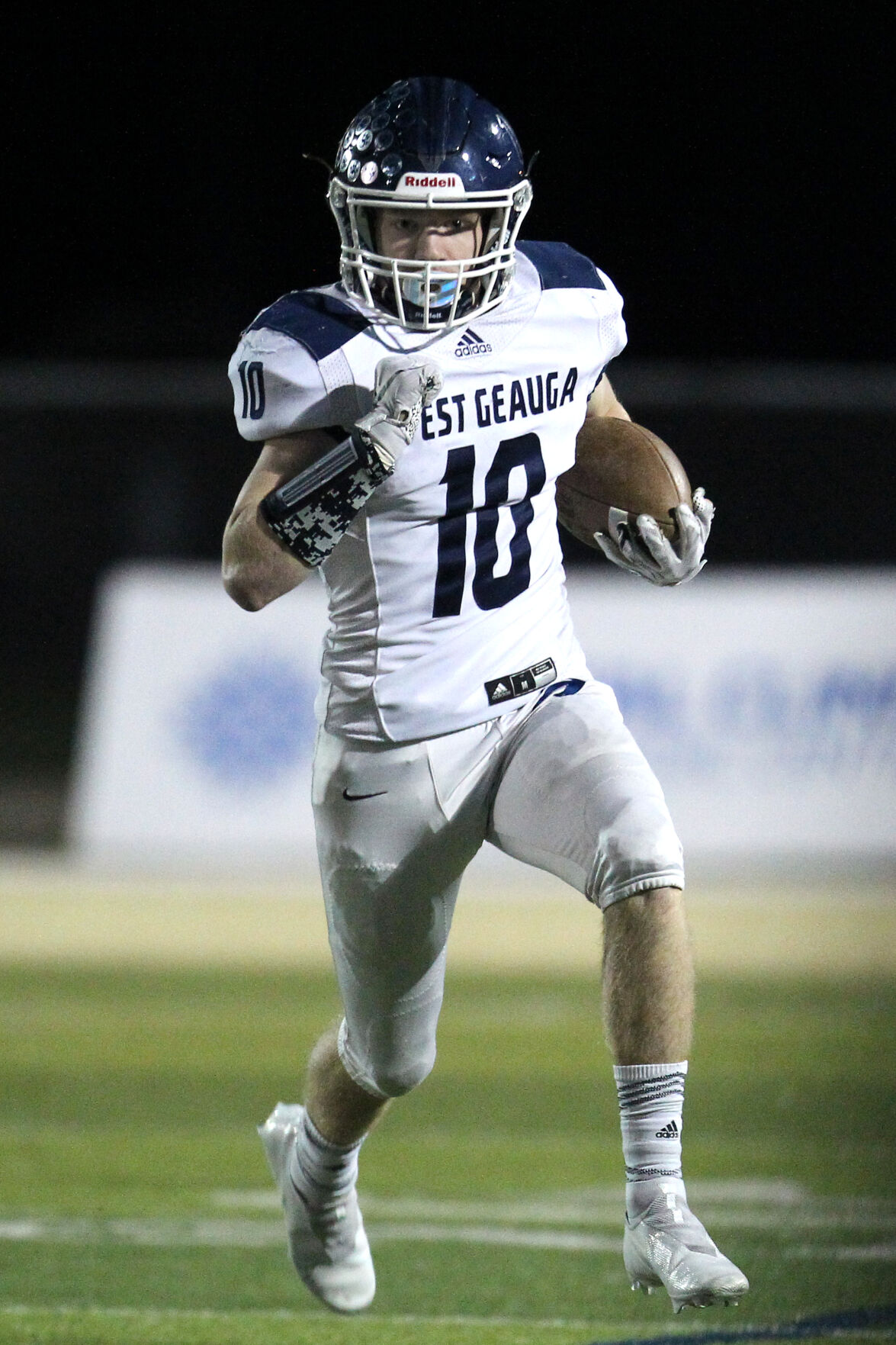 West Geauga 6-foot senior safety Luke Musser (No. 11) loses a fumble after making an interception – his sixth of the season – during the Wolverines’ road playoff loss against St. Vincent-St. Mary, 48-6, on Friday night in Akron.

A 21-6 halftime deficit is manageable.

Seeded No. 11 in the region, West Geauga didn’t draw too many second glances from folks outside of Chester Township in its matchup against the No. 6-seed Fighting Irish, who were ranked as high as 12th in the state AP poll earlier this season.

Facing a 21-0 deficit from the first quarter, West Geauga 5-foot-9 junior quarterback Danny Stewart dialed up his favorite target, 6-foot-1 junior Torry Stazzone, on a 19-yard touchdown toss to make it a manageable 21-6 game with 5:11 remaining in the half. The extra-point attempt was no good.

The host Fighting Irish found the end zone on each of their first three drives to take control in the opening frame, including a 4-yard run by 190-pound senior standout Josh Nickerson, a 43-yard toss from quarterback Evan Pelfrey to fellow senior O’Hadji Jackson and a 3-yard rush by 150-pound sophomore D’Anthony Kelker.

So, when West Geauga’s Stazzone caught that 19-yard touchdown to put his team on the board midway through the second quarter, it could have been the confidence booster the Wolverines needed to get a grasp back on the game.

A 21-6 halftime deficit wouldn’t have been too much to overcome. But the private-school boys down in Akron just had too many weapons for wishful thinking.

In the final minute of the second quarter, St. Vincent added two more scores, first on a 19-yard touchdown catch by 6-foot-1 junior Shaun Lodge with 44 seconds left and then on a 47-yard Hail Mary that 6-foot-5 senior tight end Dalen Burney hauled in as time expired for a 34-6 shot to the gut.

The Irish attempted a two-point pass to grab a 30-point lead and enact a running clock for the start of the third quarter, but they were unsuccessful.

Instead, it took St. Vincent nearly the entire third quarter to do so, as Nickerson punched in a 6-yard carry for a 41-6 upper hand with 13 seconds left in that frame.

Fighting Irish backup running back Antenio Louis concluded the scoring on another 6-yard touchdown carry in the final minute of play for the 48-6 final.

St. Vincent outgained West Geauga, 412 yards to 171 yards, with 26 first downs to the Wolverines’ eight. Specifically, the Irish owned the trenches with 275 yards rushing while holding West G to 29 yards on the ground.

For the Wolverines, Stewart was 13-of-18 passing for 99 yards, while 6-foot-4, 250-pound junior linebacker Luke Sadler came in and completed a 43-yard toss. The Wolverines also inserted 6-foot-3, 215-pound senior linebacker Julian Cicchella into the offense for a couple of carries for 6 yards.

Defensively, 6-foot senior free safety Luke Musser came up with an interception – his sixth of the season.

Although St. Vincent was propelled by its ground game – Nickerson led the way with 23 carries for 166 yards – Pelfrey shined on six-of-11 passing for 137 yards with three touchdowns, not to mention he had four carries for 20 yards. The 6-foot-1, 225-pound quarterback also collected an interception as a linebacker on defense.

With the victory, St. Vincent advanced and will hit the road to take on Division III AP No. 3-ranked Canfield (7-0) – a 28-10 victor over Kenston – at 7 p.m. Friday in Mahoning County.