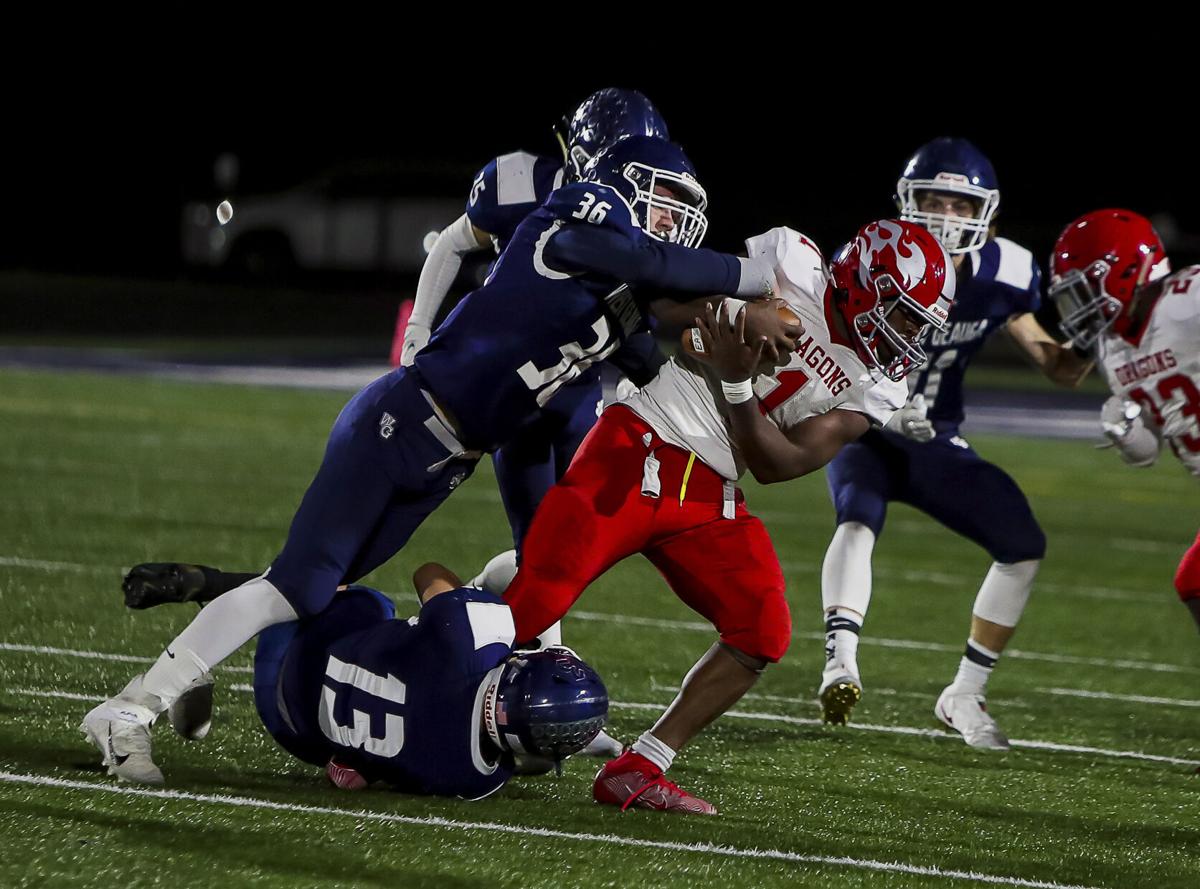 West Geauga senior linebacker Harrison Wolfhope (No. 36) and senior defensive back Dante Mirabelli (No. 13) put the hurt on a Falcon ball-carrier during playoff action Friday night.

West Geauga senior linebacker Harrison Wolfhope (No. 36) and senior defensive back Dante Mirabelli (No. 13) put the hurt on a Falcon ball-carrier during playoff action Friday night.

The West Geauga gridders (6-1) could have gone into victory formation. Most nights they would have.

Their defense just stuffed visiting Akron East (1-2) on fourth down and took over on a short field with about two minutes to play during a Division III, Region 9 playoff opener on Friday night at the Wolverines’ Howell Field in Chester Township.

West Geauga more or less had the game locked up with a 12-0 upper hand, as junior thunder foot Joey DiLalla connected on four field goals – from 30, 41, 38 and 32 yards – to become just the 23rd player in Ohio to split the uprights four-plus times in one game, according to the Ohio High School Athletic Association record book.

Starting since his freshman campaign, DiLalla also became the Wolverines’ all-time leading scorer among kickers in the history of his program. In a defensive struggle, there’s no doubt he was the man of the night in front of his home fans.

“It was just odd, because this was something I was looking at as a way to beat Akron East,” West G third-year head coach Adam Sopkovich said. “I said, we have a weapon here. I knew that their defensive line was big and strong and we might have some difficulties after losing Burke Buell.”

A 175-pound sophomore, Buell has become an influential factor in the Wolverines’ run game this campaign, alongside senior backs Trae Zimmermann and Peter Sanelli, but he was out with a knee injury.

“We knew we were going to have some difficulties to overcome, and I was just like, if our drives end in three points, I know that Akron East didn’t have a field-goal kicker,” Sopkovich said. “So, most high schools end those going four-and-out whereas we were able to kick some nice field goals. We had four of them.”

The Wolverines had an opportunity in the first quarter, when they recovered an onside kick to open the game in East territory, but the Dragons intercepted a fourth-down pass to put the kibosh on that.

Later in the opening frame, West G attempted a fake punt that was no good.

“That’s a faster and bigger team than us, and we wanted to keep the ball out of their hands,” Sopkovich said. “Some of our offensive drives didn’t end the way we wanted. It was three-and-out and two minutes off the clock. I said, ‘Guys, we have to do better. Let’s just kind of control the clock and play real football.’

“Sometimes you’re not going to get that first down, but that was the most physical, tough team we’ve played all year.”

Stepping up for the Wolverines in the trenches was 6-foot-1, 235-pound junior Luca Gasbarrino, Sopkovich said. The varsity veteran at left tackle only practiced his long snapping all week, but, on game day, he decided to shrug off an injury and play some guard to reinforce the size of West Geauga’s offensive front.

West G’s Zimmermann opened the third quarter with a 68-yard kickoff return to set up a 38-yard field goal by DiLalla for a 9-0 upper hand with 10:14 to go in the frame.

On the ensuing defensive series, West Geauga 6-foot-4, 250-pound junior linebacker Luke Sadler came up with sack to put out the flame on an East fourth-down attempt and provide the Wolverines a 32-yard field.

“He tried to kick a 50-yarder there,” Sopkovich said. “I’ve seen him kick 50-, 53-yarders in practice. So, I’m going to march him out onto the field for 50-yard attempts and closer and see if he could hit them.”

“When we play defense like that, it’s going to be hard to beat us,” Sopkovich said. “I don’t care who you are. We have two studs in the middle, and (Wolfhope) is coming back at full strength. So now we’ve got our third linebacker. Those boys, our defensive backs, you’re not throwing on us.

“So, we’ve been kind of putting it to teams, and still a lot of people don’t respect us.”

Talking about respect, Akron East showed absolutely zero of it toward West Geauga, as the Dragons were jaw-jacking the entire night, coach Sopkovich said.

So, after DiLalla booted his fourth field goal to put West G up, 12-0, with 4:16 to play, and after West G’s defense stuffed the Dragons on another fourth-down attempt, the Wolverines could have gone into victory formation with about two minutes to play. Most nights they would have.

Instead, Zimmermann busted loose for a 26-yard touchdown for a 19-0 upper hand. He finished the night with 16 carries for 86 yards and one catch for 22 yards.

While West Geauga was seeded 11th in the region and East was seeded 22nd, as voted on by the coaches, East ninth-year head coach Marques Hayes voted the Wolverines 26th out of 27 teams.

That 26-yard touchdown by Zimmermann had a little extra meaning.

“There was a little bit of a pride thing there too,” Sopkovich said. “These guys came out and disrespected our field, disrespected us as ballplayers – came out dancing on our field before the game right on our logo, giving us absolutely no respect. They also ranked us 26th out of 27 in the voting, also giving us no respect.

“So, it was kind of a, ‘Hey, man, we already beat you with the four field goals, but we’re just going to kind of let you know who we really are.’”

The Wolverines recovered an East fumble on the ensuing kickoff. Instead of lining up in victory formation, West G junior quarterback Danny Stewart tossed an 18-yard touchdown to junior receiver Torry Stazzone with 16 seconds left for the 26-0 victory.

“We prefer to play humble and do that kind of stuff,” Sopkovich said. “But, when you start doing stuff like that, I’m a fighter at heart, and you’re not going to disrespect me or disrespect my boys. And it was just kind of fitting how Torry Stazzone went in to catch that touchdown and you look up on the board and it was 26-0. They voted us 26.

“When we had 19 points, it was kind of like, I looked at my offensive coordinator and said, ‘You go get this touchdown.’”

Up next, West Geauga travels to play region No. 6-seed St. Vincent-St. Mary (4-2) at 7 p.m. Friday at Green Street Stadium in Akron.