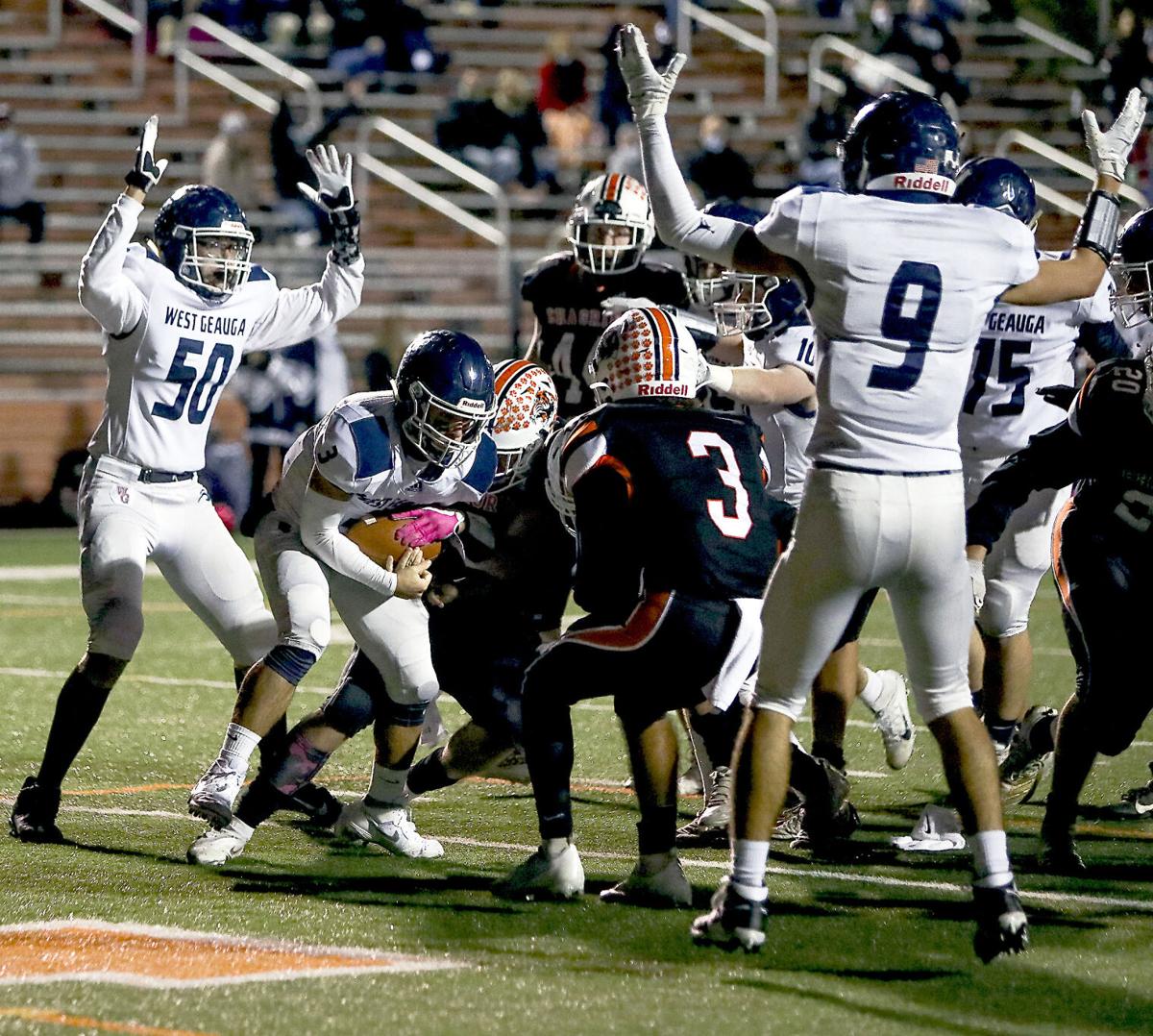 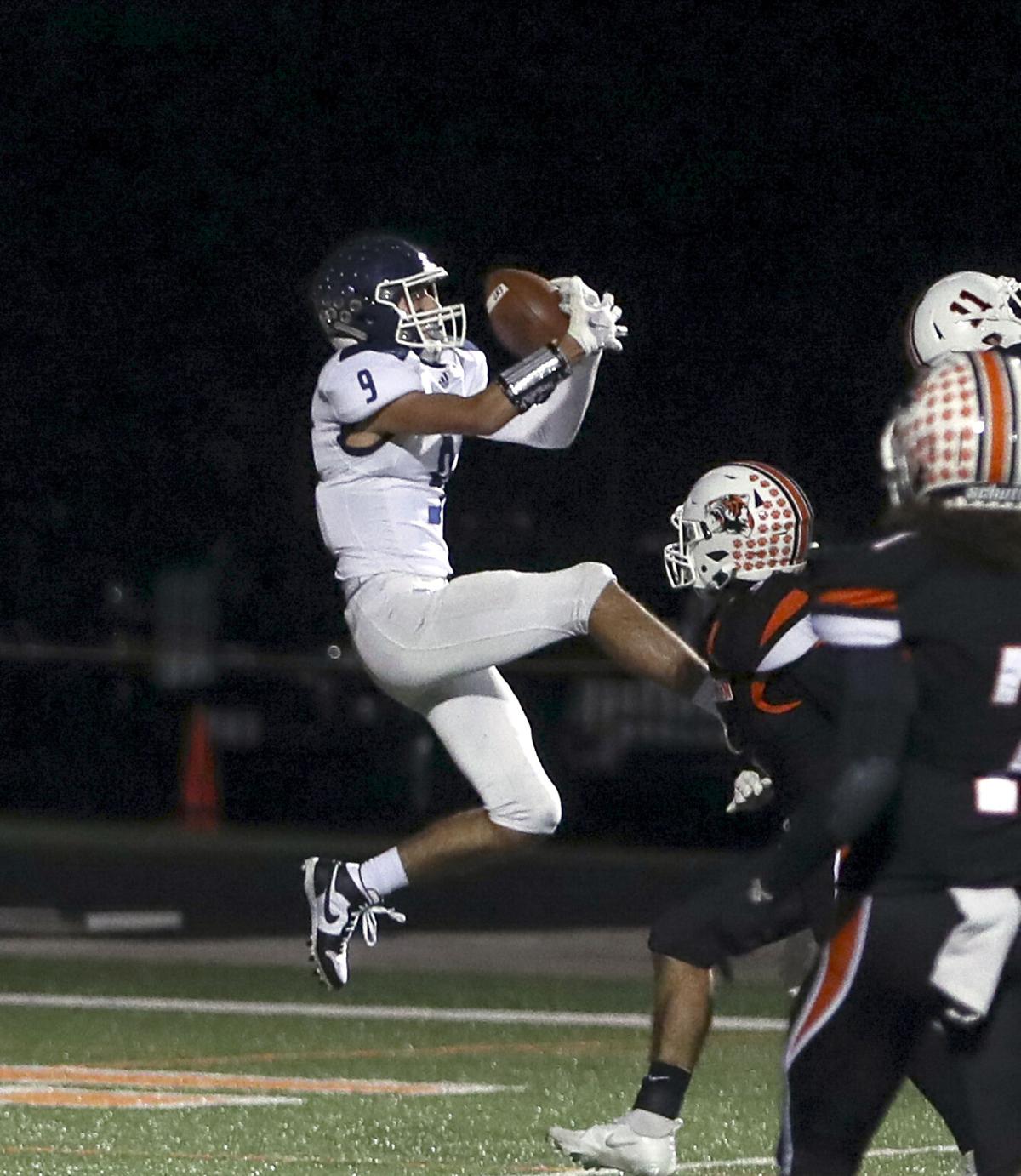 West Geauga senior receiver Torry Stazzone comes up with a 29-yard touchdown catch in the end zone from quarterback Danny Stewart during the Wolverines’ 30-22 road victory against Chagrin Falls on Friday night.

West Geauga senior receiver Torry Stazzone comes up with a 29-yard touchdown catch in the end zone from quarterback Danny Stewart during the Wolverines’ 30-22 road victory against Chagrin Falls on Friday night.

West Geauga’s defense had yet to play a down, but the Wolverines were already in big trouble during their road collision against league foe Chagrin Falls on Friday night at C.S. Harris Stadium.

The host Tigers went for the jugular with a 15-0 lead just 29 seconds into the game. First, senior speedster Will Tropp returned the opening kickoff 94 yards to the house, and senior kicker Andrew Kirkpatrick connected on the extra point.

While both Chagrin Falls and West Geauga entered the night with 4-1 records, it appeared as if the visiting Wolverines were in over their heads with no floaties.

“We just stressed to our guys on offense and defense, just keep your head up,” West G’s Stewart said. “I mean, our offensive coordinator always says it’s all about how you respond to adversity. And being down by that much that early, you’re going to have to find a way no matter what to respond to that. So, we had no choice but to keep going.”

The West G gridders tried to get something going on a drive into Chagrin territory, but Chagrin Falls 205-pound senior linebacker Owen McClintock forced a fumble, and Tropp recovered it at the Tiger 37-yard line.

The Wolverines’ defense finally got onto the field and forced a three-and-out punt, thanks to a pass breakup by junior defensive back Chris Ranallo and a sack by 215-pound senior linebacker Julian Cicchella.

West G’s offense had a chance to put some points on the board with an 11-play drive, but a low long snap and a less-than-optimal hold resulted in junior kicker Joey DiLalla missing a 37-yard field goal attempt with 1:12 left in the opening frame. Nothing seemed to be going the Wolverines’ way.

But on their next offensive series, the West G gridders got the spark they needed with a third-and-15 screen pass from their own 15-yard line, with 175-pound senior running back Trae Zimmermann finding space for a 28-yard pickup.

“In general, third downs are very big screen times,” West G offensive coordinator Adam Lowther said. “And Trae is a good athlete. He took advantage of the situation. He made a very big play to get the first down with a little extra. And our O-line and receivers did a good job blocking downfield to turn that 5-, 10-yard gain into something more.”

On the next play, West G’s Stewart connected with senior Peter Sanelli on a forward pitch during a sweep to the outside, where Sanelli broke tackles to turn a no-gain into a 57-yard touchdown to cut the Wolverines’ deficit, 15-7, with six minutes to go in the half.

Sanelli finished with nine carries for 24 yards and four catches for 76 yards – mainly on those short, shovel-like passes on the sweep.

“I was really just reading off Trae’s blocks to the outside,” Sanelli said. “So, I had a little room down the sideline. I thought it was going to be a nice, little 15-yard run, but I saw those two dudes and cut in, kind of bounced off the one dude, stayed in and just took it down the sideline. It was definitely the momentum we needed, but I can’t say I take the credit for it.”

West G’s defense forced the Tigers into a fourth-and-long punt from their own 17, and the boot took a backward bounce to provide the Wolverines a 40-yard field.

Three plays later, Stewart pulled the trigger a 29-yard touchdown toss to 6-foot-1 junior Torry Stazzone, who was in double coverage in the end zone but kept his focus, as the leather slipped between the outstretched arms of a Tiger defensive back, to cut the deficit, 15-14, with 2:55 left in the half.

“Torry is obviously my favorite target,” Stewart said. “I think I’ve thrown a touchdown to him every game. I have so much trust in him because of all the times we went up to the field during quarantine. I just know where he’s going to be.”

The sides traded interceptions – with Chagrin 6-foot-3 senior linebacker Dawson Pierce getting a pick at midfield and West G 6-foot senior safety Luke Musser collecting his fifth pick of the season in the end zone – going into intermission.

While the Wolverines trailed by a point, their offense outgained Chagrin’s offense, 194 yards to 42 yards, through the first half.

“We were even talking at halftime how this game should be 14-0 us, not 15-14 them,” Sanelli said. “We felt like we made some mistakes, and it showed when they scored off of them.”

West G’s Stewart orchestrated a seven-play, 73-yard drive to open the third quarter, which resulted in the signal-caller calling his own number on an 8-yard touchdown run. He crossed the goal line thanks to a pile-pushing reinforcement for a 20-15 Wolverine lead with nine minutes to go in the frame. The ensuing extra point was blocked.

Stewart would finish the night 12-of-18 passing for 229 yards along with eight carries for 48 yards.

Chagrin answered back on its first offensive touchdown of the game, when 170-pound senior back Xavier Perez, who had been injured most of the season, split a pair of defenders at the line of scrimmage and scored a 13-yard touchdown to reclaim the lead, 22-20, with 3:49 to go in the third quarter.

The Tigers’ offense did the majority of its damage on the ground, with Perez, 46 yards, sophomore Donny Hardy, 43 yards, senior Cam O’Connor, 41 yards, McClintock, 23 yards, and Tropp, 22 yards, combing for 175 yards rushing.

West Geauga’s field-goal unit got redemption on DiLalla’s 25-yard boot to claim a 23-22 lead with 10:58 to play, and then the Wolverines’ defense came through with another turnover – 210-pound senior defensive end Luke Reed, who had six tackles, pounced on a fumbled pitch in the backfield to give his team a 40-yard field with 9:26 to play.

“So, halftime I told my kids, I said, ‘The defense needs to step up, and we need to make some big plays to win the game,’” West G defensive coordinator Scott Larrick said. “That’s the mentality I want. Our offense is putting points on the board, and we need to get them the ball. We win the game when we get turnovers.”

Two plays after Reed’s fumble recovery, Stazzone broke loose on a 38-yard pickup down to the 2-yard line, and then Stewart punched it in from there for a 30-22 Wolverine advantage with 7:59 to play.

Chagrin’s offense had one final possession in an attempt to force overtime, but a 16-play drive ended with a fourth-and-two incompletion on a 13-yard field with 22 seconds remaining for the 30-22 final in West Geauga’s favor.