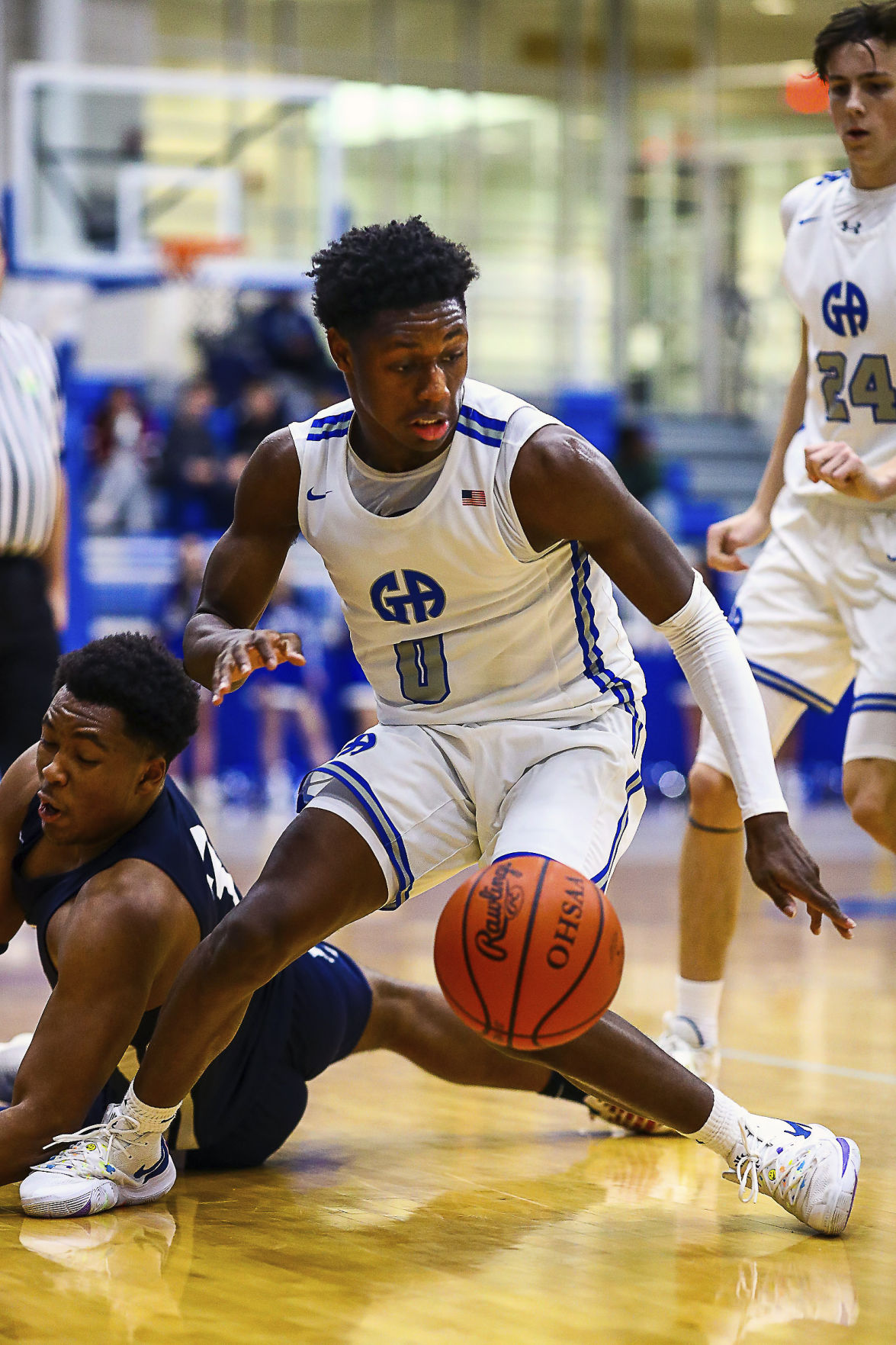 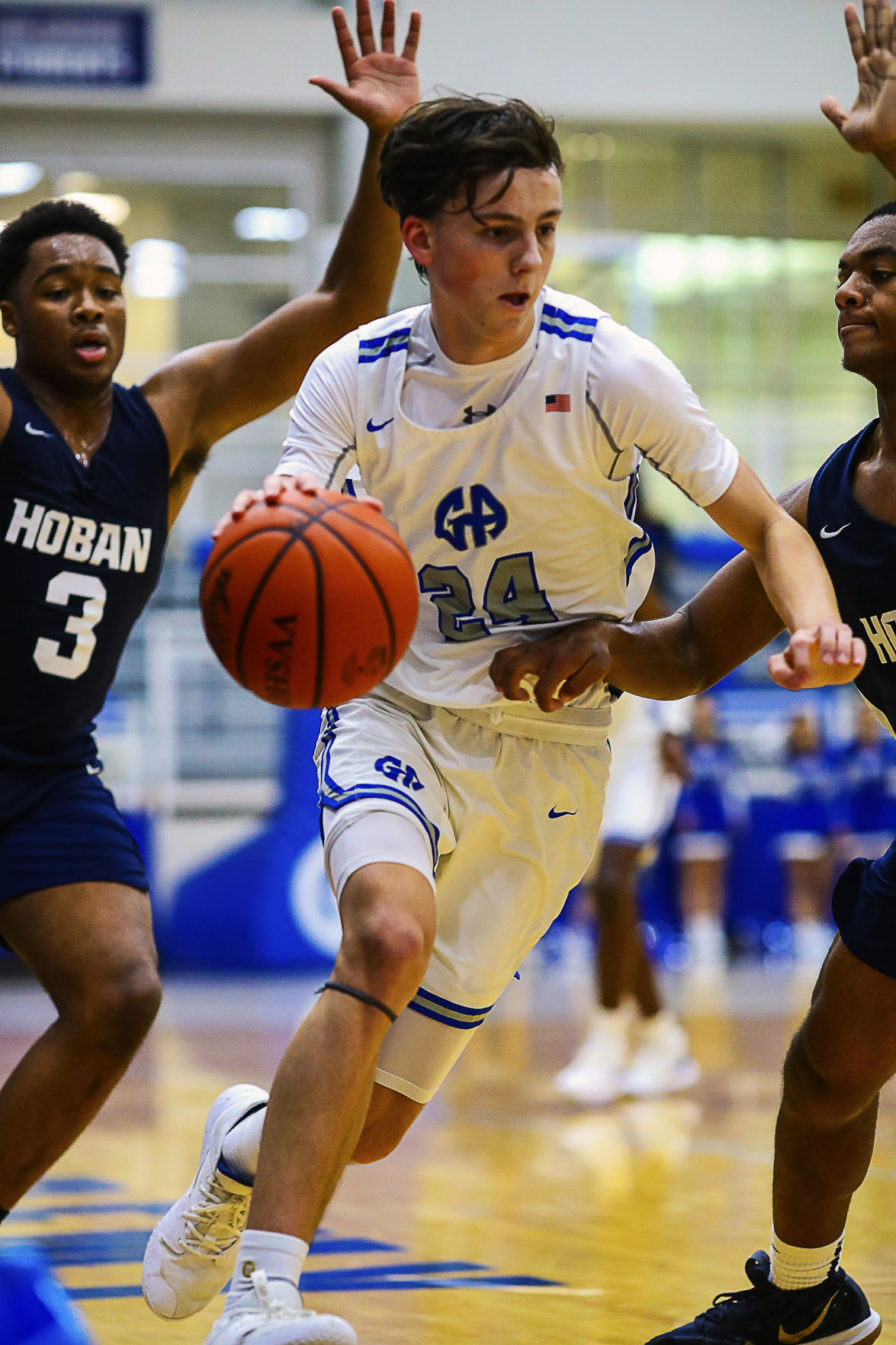 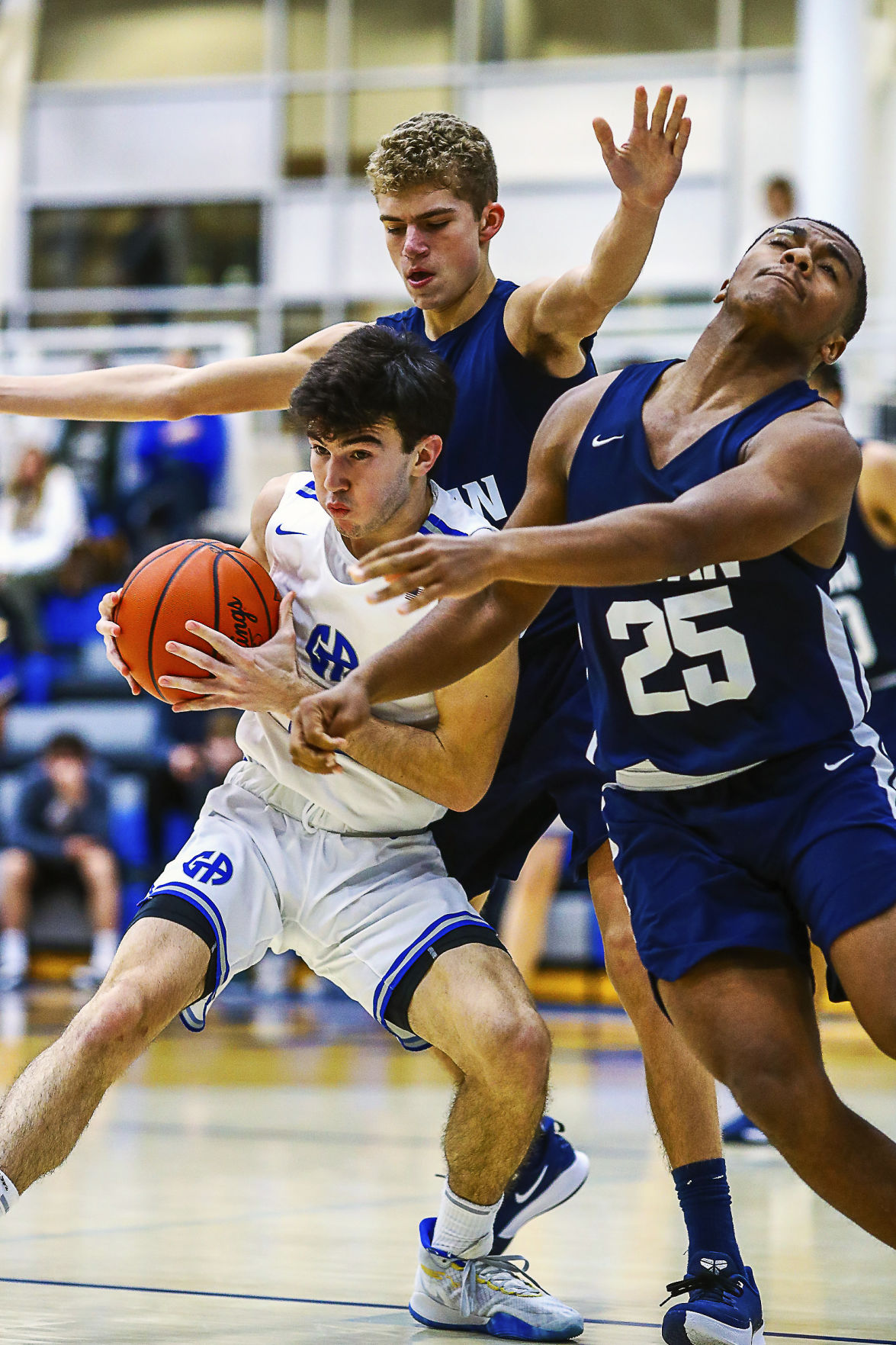 Gilmour Academy’s reserves already subbed in and were making their marks, while Archbishop Hoban was still without a bucket during a Holy Cross boys hoops battle on Friday night in Gates Mills.

Lancer 6-foot-2 senior starter Ian Miller got his host cagers going with six points out of the gates, including a transition feed from junior point guard Andre Rodgers, as well as an unassisted floater.

Then Rodgers assisted 6-foot-4 sophomore reserve Ryan Mueller on a baseline inbounds pass for a 10-0 Gilmour lead with 1:20 to go in the first quarter, as the visiting Knights of Akron missed their first seven shots against a Gilmour defense that maintained a perimeter presence while still closing all lanes to the iron.

Gilmour entered the evening at 5-5, while Hoban came in at 3-4. But the Lancers held Hoban to a season-low offensive output to lock up a 51-37 victory on their home floor.

“I thought our kids did a great job with their preparation,” Gilmour second-year head coach Dan DeCrane said. “We wanted to take away shooters. They have some catch-and-shoot guys. We wanted to deny one away. They set a lot of ball screens that our guys defended great by jamming the screen and then going underneath it with the guy who was guarding the basketball.

“So, we tried to contain and contest every shot. But, to be honest, we just did not let their shooters catch it open. And we ran them off the circle a lot.”

Specifically, Gilmour’s defense keyed in on taking away the catch-and-shoot threat of Hoban 5-foot-11 freshman Logan Vowles, who had knocked down nine treys in Hoban’s past three games.

But with Lancer 6-foot-5 senior Garrett Olsen guarding Vowles on Friday, the Knight sharpshooter didn’t get a single attempt from outside the arc. Vowles sank his only field-goal attempt of the game for two points, while the rest of the Hoban cagers were left struggling on a two-of-18 clip from downtown, or 11.1 percent.

“I think I was just well-prepared for the game,” Olsen said of his shutdown defense. “I knew what was coming. Like, they set a lot of double-staggers for (Vowles), and my job was to tag and get over top, take that away, and then pressure him whenever he got the ball. And I forced him into a couple turnovers, too, which was good.”

Olsen also finished with seven points and a team-high eight boards to help his Lancers finish plus-nine on the glass.

Hoban 6-foot-4 senior Dominick Moegerle finally got his team on the scoreboard with an and-one finish to cut the Knights’ deficit, 10-3, with 1:05 to go in the first quarter.

But then Gilmour 6-foot-3 senior Connor O’Toole splashed a wide-open trey on an assist from 6-foot-2 freshman Brandon Rose to close the frame. O’Toole triggered another 3-pointer from deep to open the second quarter, and then O’Toole had a drive-and-dish assist to Rodgers for another triple to open the Lancers’ largest lead of the half, 19-3, with 6:05 left.

“It just depends on the game,” said O’Toole, who has been hitting varsity threes since he was a freshman but has the court awareness, handles and passing abilities to be a ball general. He finished with a team-high 11 points and seven assists on 18 Lancer field goals.

“So, obviously I’m always trying to make the right play,” O’Toole said. “If I’m open, I’m going to shoot it and let it fly. But, if they’re going to close out hard on me and I can get a gap and get to the lane and find my guys, then I’m going to find my guys. So, I feel I did a good job of that today.”

After a timeout, Hoban 27th-year head coach T.K. Griffith got his Knights in order for a 12-6 run to close out the half, cutting their deficit, 25-15, at the break, behind the scoring efforts of 5-foot-9 junior Isaiah Young and 6-foot-3 junior Darryl Peterson.

In the Lancers’ previous game, they were outscored by five points in the third quarter of a 62-57 loss against Glenville in the Play-by-Play Classic on Jan. 5 in Euclid.

And in their previous loss before that, the Gilmour cagers were tied, 27-27, at halftime against rival University, before they were outscored, 21-13, in the third quarter of 70-58 loss to the Preppers on Dec. 31.

So, a 25-15 halftime lead against Hoban on Friday didn’t necessarily mean all that much, coach DeCrane said.

“One of our Achilles heels has been the third quarter,” he said. “I wrote on the board, ‘We have to win the third quarter, and we’re going to win this game.’ And I didn’t care if it was by one point. What we’ve really done a lot is let teams feel really good about themselves, and they’re right back in the game with us. But tonight was not one of those nights. We were just able to kind of finish the job.”

The Lancers began the third quarter on a 12-4 run for their largest lead of the game, 37-19, with Olsen opening the frame with a put-back bucket and a 3-pointer assisted by O’Toole.

Gilmour owned the glass with five offensive boards in the first quarter, but that put-back by Olsen was the Lancers’ lone offensive rebound of the second half. Olsen did, however, collect four of his boards in the third quarter.

“Coach told me at halftime that I had to be more aggressive on the glass, especially on the offensive end,” he said. “And the past couple games, I’ve been the get-back guy. So, I had to get back and stop transition. But, today, I was able to go get O-boards, which was nice, and I just became more aggressive.”

Meanwhile, Gilmour 6-foot-5 junior Ben DeMell also caught a surge in the third quarter with seven of his 11 points coming in the frame, including a pair of free throws to put the Lancers up, 39-25, before the start of the fourth quarter.

Although Gilmour had five of its 11 turnovers in crunch time, allowing Hoban to cut its deficit to single digits, 42-34, with four minutes to play, O’Toole sank five-of-six free throws down the stretch to help put the game to bed.

Up next, Gilmour will travel to take on Holy Name at 7 p.m. Friday in Parma Heights.