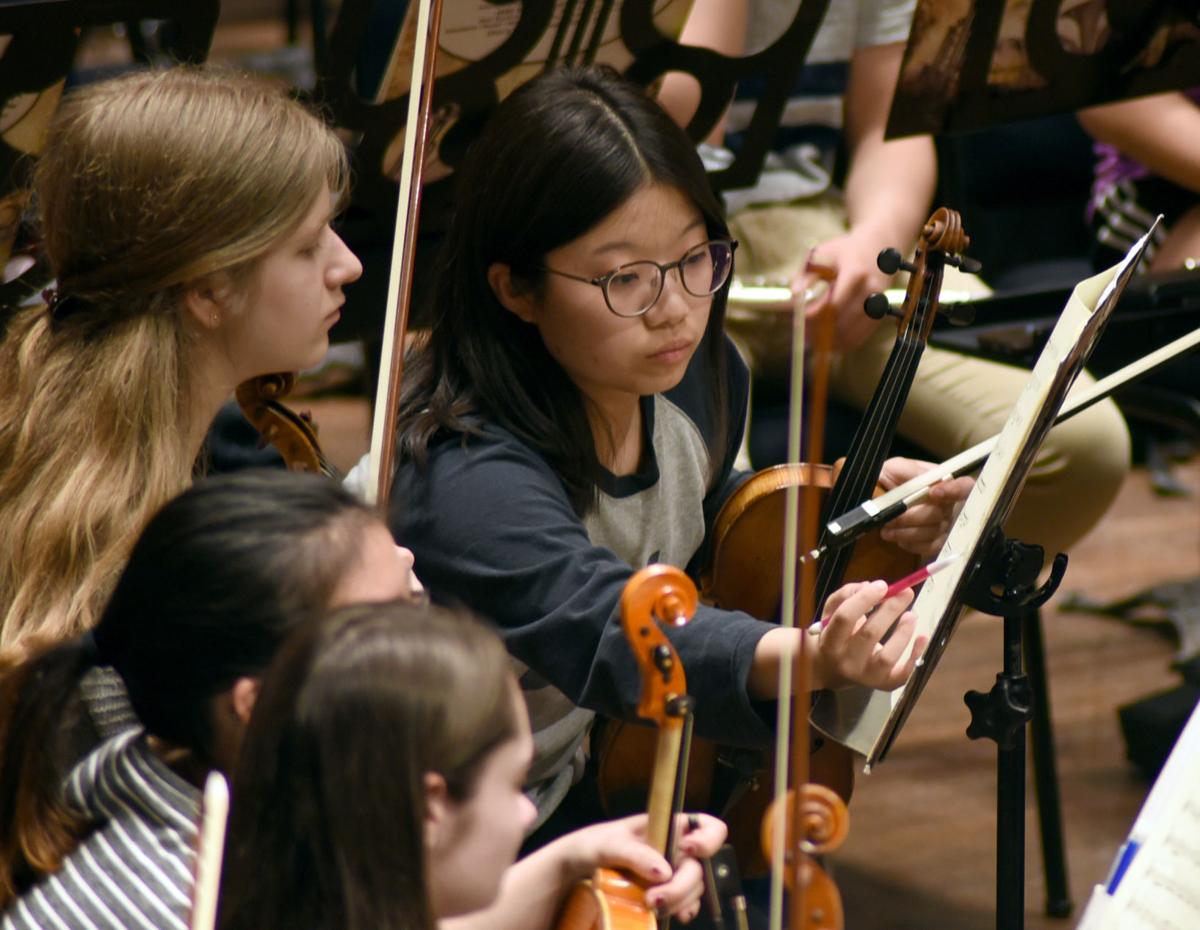 Lea Kim, 17, of Solon marks the score during rehearsal with the Cleveland Orchestra Youth Orchestra at Severance Hall in Cleveland. The Solon High School junior has been playing the violin since she was five years old and joined COYO, her first full symphony orchestra experience, in 2015. 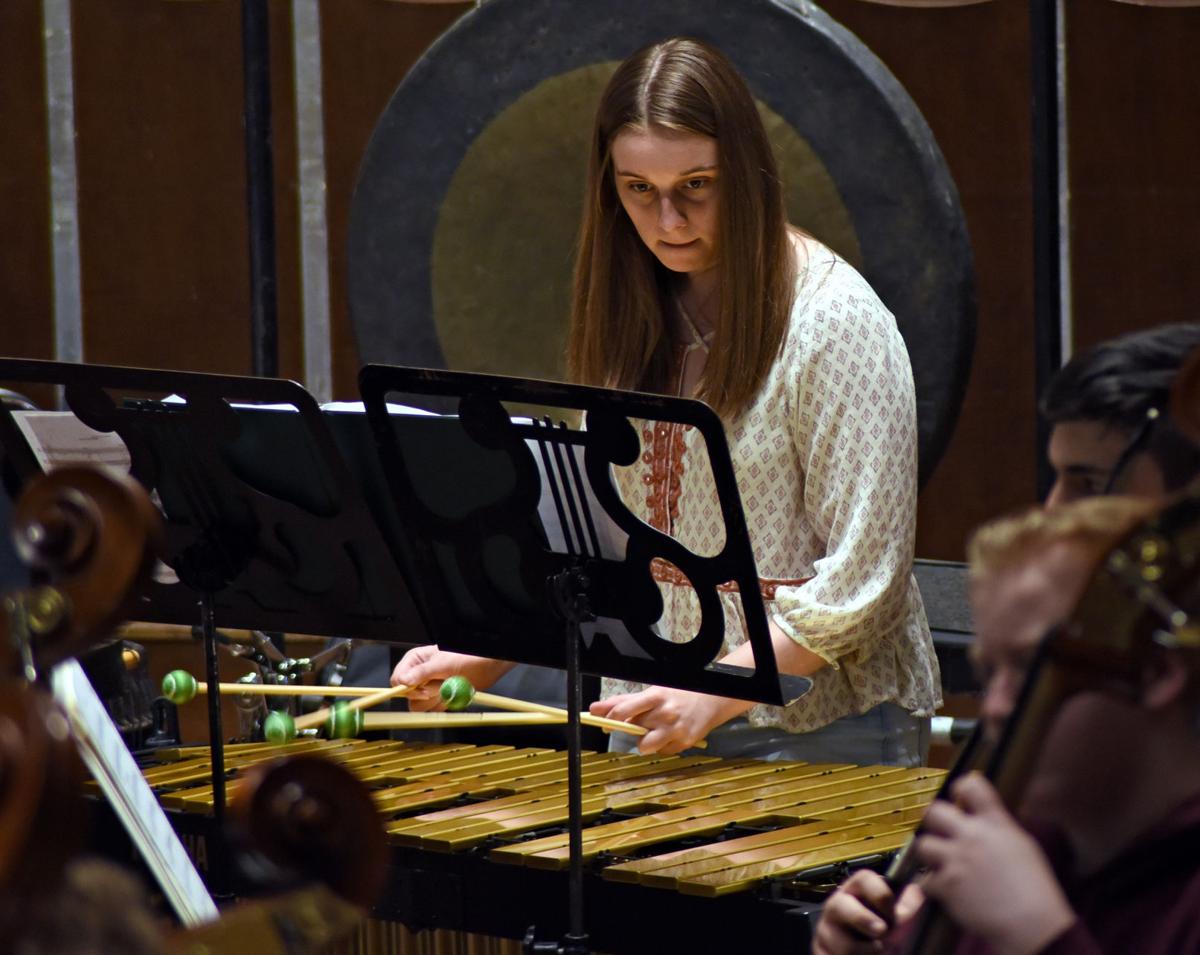 Sydney Gembka, 18, of Chester rehearses Danielpour’s “Toward a Splendid City” with the Cleveland Orchestra Youth Orchestra at Severance Hall. The West Geauga High School senior and four-year COYO veteran percussionist plans to major in music education or performance at the University of Michigan this fall. 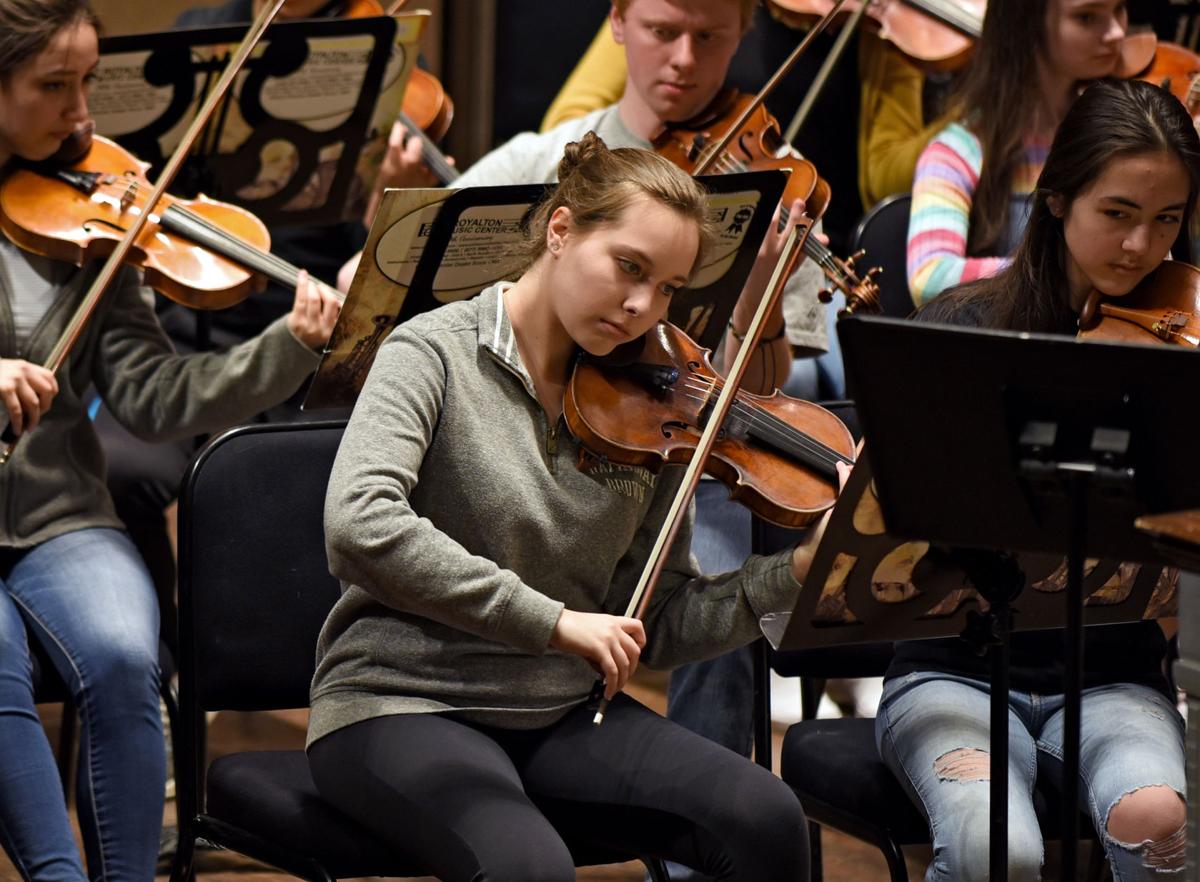 Julia Schilz, 15, of Pepper Pike rehearses Danielpour’s "Toward a Splendid City" with  the Cleveland Orchestra Youth Orchestra at Severance Hall. A violinist, she said her role as concert master is to set an example to the other young musicians.

Lea Kim, 17, of Solon marks the score during rehearsal with the Cleveland Orchestra Youth Orchestra at Severance Hall in Cleveland. The Solon High School junior has been playing the violin since she was five years old and joined COYO, her first full symphony orchestra experience, in 2015.

Sydney Gembka, 18, of Chester rehearses Danielpour’s “Toward a Splendid City” with the Cleveland Orchestra Youth Orchestra at Severance Hall. The West Geauga High School senior and four-year COYO veteran percussionist plans to major in music education or performance at the University of Michigan this fall.

Julia Schilz, 15, of Pepper Pike rehearses Danielpour’s "Toward a Splendid City" with  the Cleveland Orchestra Youth Orchestra at Severance Hall. A violinist, she said her role as concert master is to set an example to the other young musicians.

Few musicians will ever have the chance to perform on a stage as grand as Severance Hall in Cleveland. Even fewer can say that they played on the 86-year-old venue before they turned 18.

“It’s amazing,” said Sydney, 18, a senior at West Geauga High School who plays percussion. “We rehearse there every week. The stage is all lit up and it’s really beautiful.”

Sydney began her musical career in the fourth grade when she played the recorder. She joined the school band, but said, “I didn’t really like band to begin with. My main motivation was going to Disney World with the marching band, but eight years later, I’m about to major in music.”

Sydney explained that her turning point came in sixth grade, when she started to have fun with music and joined every ensemble she could find, including the middle school jazz band, the Cleveland Youth Wind Symphony and the Geauga County Junior Fair Band.

“I first heard about COYO in fourth grade when we took a fieldtrip to Severance. In sixth grade when my enthusiasm was heightened, somehow I remembered COYO. I looked it up and I said, ‘I want to audition.’”

Sydney made it into COYO in the summer before her freshman year of high school and has been with them for four years now.

“It was a little terrifying,” she said of her first COYO rehearsal. “The other percussionists were all seniors and we don’t have an orchestra at our school, so playing with an orchestra for the first time was really, really different.”

Sydney said she learned about percussion techniques. “Like there’s a proper way to play the triangle. I wouldn’t have thought of that.”

Now in her fourth and final year of COYO, Sydney said she feels more confident and hopes to continue her music career at University of Michigan and major in teaching or performance.

As concert master, Hathaway Brown sophomore Julia Schilz, 15, is easy to spot in the 93-member orchestra.

The violinist explained that she comes from a family of musicians, so the question wasn’t if she would pick up an instrument so much as “what instrument do I play?” Julia said.

Her mother is a pianist and opera singer, but Julia chose the violin after seeing an older neighbor play it and meeting several other violinists.

“I started the Suzuki Method, and you start by playing on a box with a paint stick as the neck to get the posture and really learn the physical aspects of playing and how it should feel,” Julia said. “It was frustrating to not be able to pick up a real violin, so when I could rent my own, it was a huge victory.”

By age 6, Julia was playing in the Cleveland Institute of Music Beginning Orchestra and playing with a chamber quartet at age 9. Some of the older members of her quartet were also members of COYO, so Julia, who tries to practice three to four hours a night, decided to audition the summer before her freshman year.

Not only did she get in, she was named assistant concert master.

“I was really shy back then, and my stand partner was a senior, so that was intimidating,” Julia said. “Now I look back on the way he handled the position and it helped me learn from what he was doing. It was intimidating at first but it was a perfect learning environment.”

Julia explained that there was a huge learning curve, but it made her rise to the occasion.

“It was absolutely mind blowing. I fell in love with music on a deeper level because we were playing grand pieces in Severance Hall. I was really nervous because the first time I was playing there, I was sitting up front, so I couldn’t hide behind anyone. I loved putting that sound out and hearing that collaboration of big sounds and big colors. I can’t describe it,” Julia said.

This season, Julia was promoted to concert master, a role she said is more about setting an example, rather than mentoring younger musicians. She leaves that to the professionals – the Cleveland Orchestra members who serve as coaches to the youth orchestra in sectioned rehearsals.

“Sectionals are the most valuable part of being in COYO. The coaches are so great at pinpointing the little spots that are unique to our instruments that are tricky,” Julia explained. “They’re so thorough and patient, but hold us to a high standard. I always walk away with something new to ponder and apply to my own personal practice,” she said.

The coaching experience has also been valuable for Solon High School junior Lea Kim, 17, who joined COYO in 2015. Like Julia, Lea is a seasoned violinist who started the Suzuki method at age 5.

“When I was 10, I was feeling like this is difficult and there was a point I wanted to quit, but at that time, my mom enrolled me to play with chamber groups, and I think I was fueled by performing with other people,” Lea said.

Lea played with the Solon Middle School Orchestra as an elementary school student, and played with the Cleveland Institute of Music Preparatory Orchestra. In seventh grade, her teacher, Rachel Huch, encouraged her to audition for COYO. She was named an alternate, and re-auditioned the following year.

Lea explained that much like a college acceptance letter, a small letter is disappointing, and a big letter means you’re in.

“I was on an extracurricular trip and my mom called me to say I got the big letter,” Lea recalled.

Lea explained she had never worked with a full symphony orchestra.

“I remember just staring at the wind section because I was mesmerized by the clarinets. Everyone was at such a high level, and I’d never been at that level.

“I’ve learned to pay attention to other parts because I have to know what other people are playing,” Lea said. “I was pretty intimidated at first, but I learned that I can reach up and play at that level. It motivated me to practice more because if you get it right you feel so great, especially in fast portions. It’s such an exciting moment.”

Established in 1986, the Cleveland Orchestra Youth Orchestra’s 2017-2018 season ends Sunday with an 8 p.m. performance at Severance Hall conducted by Vinay Parameswaran. The program includes Beethoven’s “Coriolan Overture” and Lutoslawski’s Concerto of Orchestra. A chamber music prelude concert will be held in the Reinberger Chamber Hall at 7 p.m. For tickets and more information, visit www.clevelandorchestrayouthorchestra.com.

Krista Kano joined the Times in 2015, and has reported on the Republican National Convention, statewide issues, marijuana, the Geauga Park District and Bentleyville. The award-winning reporter is a graduate of Boston University