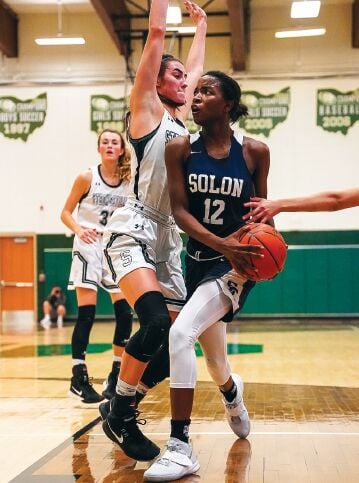 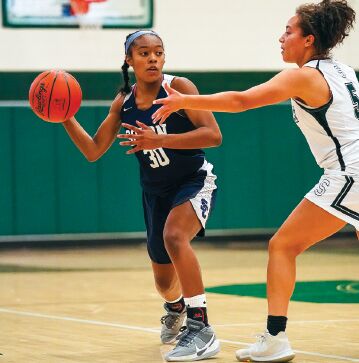 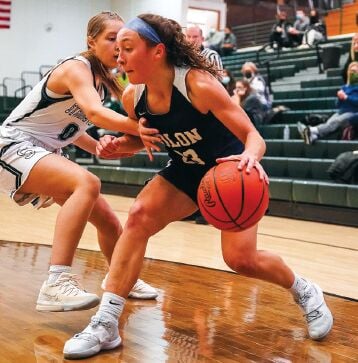 Despite starting two freshmen and two sophomores, the Solon girls basketball team showed glimpses of brilliance in a season opener on the road against a veteran Strongsville squad on Saturday afternoon.

Behind 5-foot-6 sophomore point guard Chyanne Hatcher-Turbeville distributing the ball and attacking the basket, and 5-foot-10 sophomore Morgan Blackford finessing and muscling her way to a brilliant double-double of 17 points and 16 rebounds against taller opponents, the Lady Comets owned a 36-30 halftime lead.

The Solon girls then built their largest lead of the game, 41-32, when 5-foot-7 sophomore Kennedy Ford came off the bench and buried one of her three triples early in the third quarter. The Lady Comets regained that margin, 43-34, on a coast-to-coast steal and layup by Hatcher-Turbeville.

They were on the verge of breaking open a double-digit command.

“We turned them over, got layups, didn’t settle for 3-pointers,” Solon 12th-year head coach Trish Kruse said. “We were playing really, really well. And then we missed some layups, and they came down and either capitalized with a two or a three.”

Solon’s glimpses were short-lived, as Strongsville, which returned seven of its top eight players, ended the third quarter on a 10-0 run to take a 44-43 lead and then continued that momentum for a 64-54 victory over Solon.

The Lady Mustangs (3-1) had an 18-2 run extend into the fourth, which allowed them to take a 52-45 advantage before closing it out.

“We had a nine-point lead in the third quarter and just kind of let it get away from ourselves,” Kruse said. “We made some errors on both ends of the floor, and it ended up costing us. And then our youth and the fact that they’ve played four games, and this was our first game, it showed. We’re not in game shape yet.”

Although the Lady Comets graduated three starters from a year ago, their rotation is a little bit deeper this season with four sophomores who grew up quickly and three freshmen possessing the skills to compete at the varsity level.

But the early-season growing pains showed up in the latter parts of the game against Strongsville.

While Solon has an abundance of young talents, it has no juniors in the program. Weaver, a Northwestern University signee, is the Lady Comets’ only senior starter. The fourth-year veteran finished with eight points, five boards, four assists and three steals.

That’s not a bad game resume by any means, but with how far her game has come in the offseason, Weaver knows she must give the Lady Comets even more, Kruse said.

Hatcher-Turbeville, who finished with 15 points, including three 3-pointers, eight rebounds, five assists, two steals and a block, and 5-foot-6 freshman Nia Booker are both starters at the point guard position this season.

“Every day in practice they work on it,” Kruse said. “There are certain sets that Nia runs, and then there’s certain sets that Chy runs. So, we just have to find a way for them to cohabitate out on the floor together. But every day has gotten better for them. I’m not worried about having two point guards out there on the floor.”

While Booker seemed a little nervous in her varsity debut on Saturday, Kruse said she’s got all the right stuff to be a starter in the Lady Comets’ perennial-power program.

Also joining Ford, who finished with nine points against Strongsville, in the Lady Comets’ rotation off the bench this early season are 5-foot-10 senior Micaha Marbury and 5-foot-7 sophomore Raquel Thompson – both varsity returners – as well as 5-foot-6 freshman Sophia Lance.

Not to mention, Strongsville also has the height of 5-foot-11 senior Sarah Robertson and 5-foot-10 junior Natalie Worley, who return with significant experience from the Lady Mustangs’ 18-5 district semifinal campaign a year ago.

“They outsized us in almost every position,” Kruse said. “But it didn’t matter. Morgan (Blackford) did a great job rebounding, and we just had to get other people to help contribute a little bit more off the glass.”

Strongsville outrebounded Solon, 51-39, and shot 42 percent from the field, while the Lady Comets finished just 29 percent with a bulk of their misses coming during that offensive lull that began in the third quarter. Solon also shot a dismal 20 percent from the foul line.

“It was everything,” Kruse said. “We didn’t execute our sets very well. That was extremely disappointing. And then sometimes we didn’t know who we were guarding because of lack of communication. Again, sometimes I think that happens with young kids.

“There’s going to be some bumps. We understand that. But our kids compete every single day. So, they’ll get there. We’ve just got to be patient in the process.”

Without much control over their schedule – several athletic programs throughout Ohio are on pause due to concerns from COVID-19 – the Solon girls have one heck of a challenging schedule through their first five games.

The Lady Comets were scheduled to host Berlin Hiland, which has 13 state final-four berths with five Division III state titles in the past 17 seasons, on Dec. 23.

Laurel was a Division II regional runner-up at 22-4 last season; Jackson was 21-3 and ranked No. 6 in Division I last year; and GlenOak was in the Division I state semifinals before its playoff run got cut short from COVID-19 this past March.

“It is what it is,” Kruse said. “We’re just excited to be playing basketball. So, our kids are going to have to adjust and adapt to who we’re playing against.”