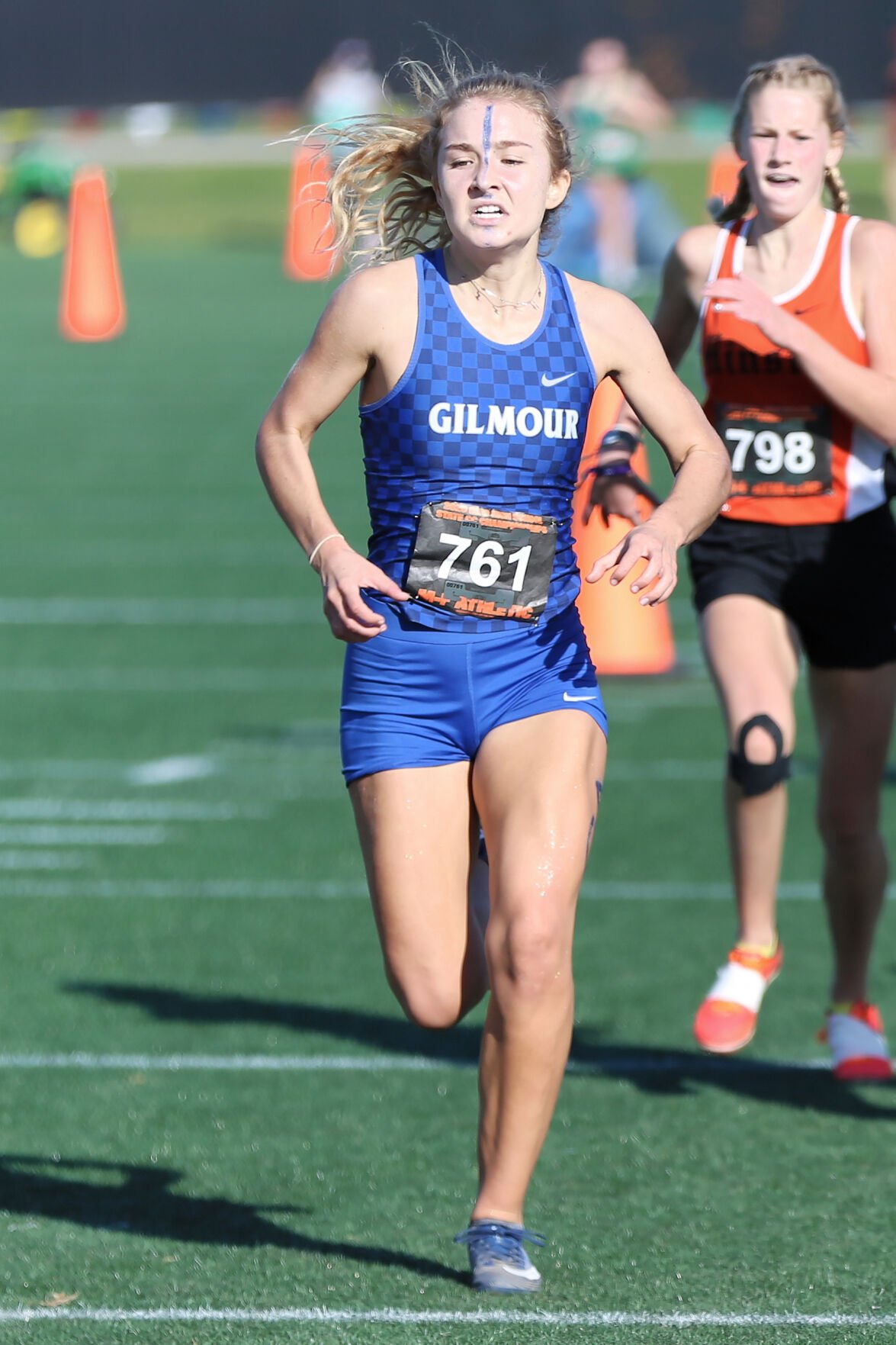 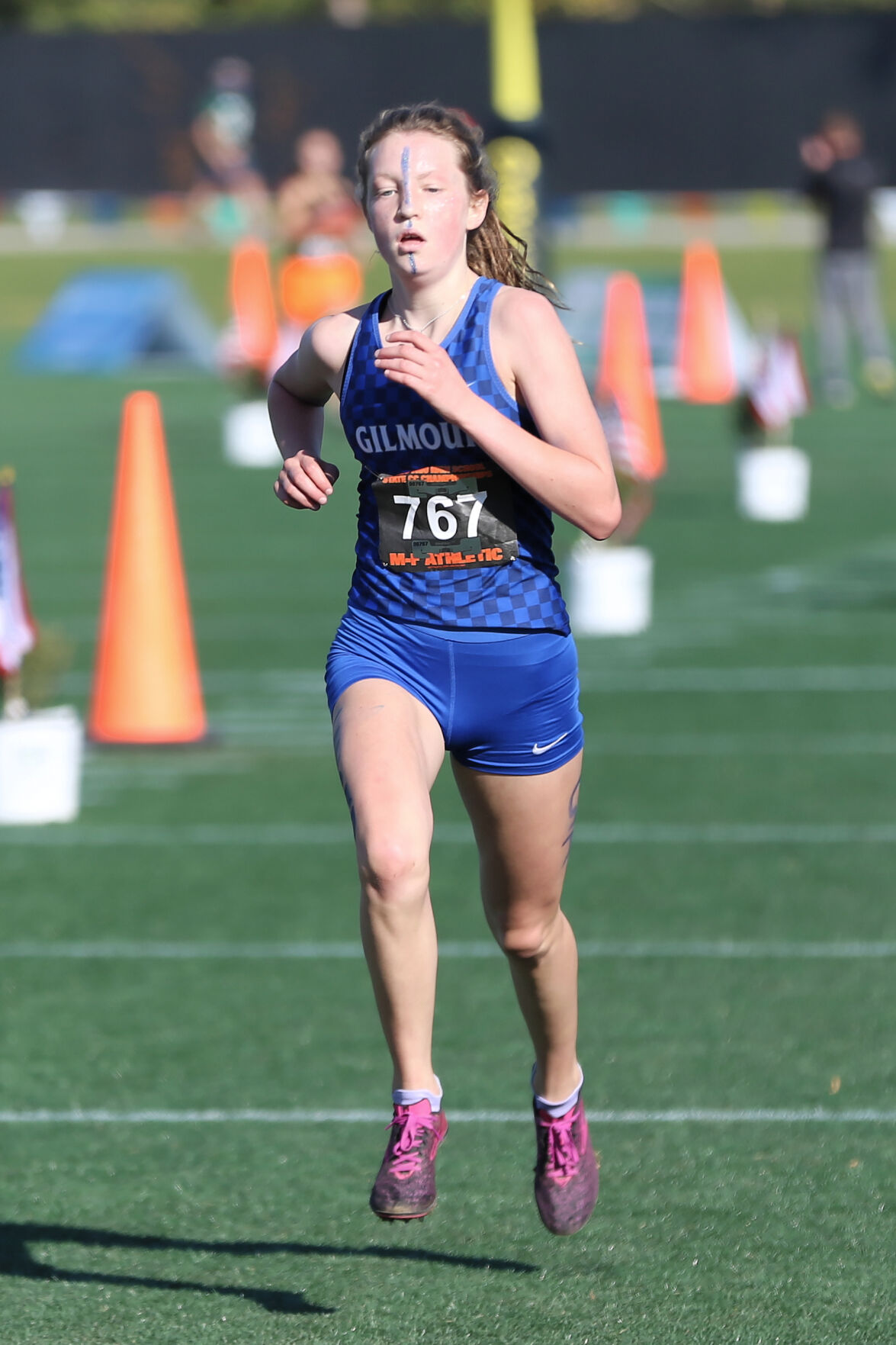 Gilmour Academy freshman Amy Weybrecht gives what she has left to finish third – matching the best placement in her program’s history – during the Division III state cross-country meet on Saturday at Fortress Obetz.

Gilmour Academy freshman Amy Weybrecht gives what she has left to finish third – matching the best placement in her program’s history – during the Division III state cross-country meet on Saturday at Fortress Obetz.

There appeared to be a rabbit in the field, but she wasn’t a pacemaker during the girls Division III state cross-country championship on Saturday at Fortress Obetz.

Waynesfield-Goshen sophomore Taylor Spencer – a returning all-Ohioan who finished sixth at the 2019 state meet – took a commanding 10.2-second lead with a 5:29.5 split at the mile mark of Saturday’s race, which was faster than any female runner across all three divisions.

Gilmour freshman Amy Weybrecht, making her big-dance debut, split a 5:40.4 and was just trying to hang tight in the front pack of two through eight runners, who were separated by 3.5 seconds at that point in the race.

“I think I just had to stay smart and not try to stick too close to her,” Weybrecht said of Spencer’s rabbit legs. “I didn’t know who she was or anything like that, and I was planning to just let her go and see what would happen.”

Spencer’s feet proved to be a bit too happy in that opening mile. She faded to 16th at the 2-mile mark, before ultimately finishing 55th overall.

Gilmour’s Weybrecht, meanwhile, kept her focus on a consistent stride that fed off of a more familiar competitor – Maplewood freshman Caleigh Richards, the district and regional champion whom she raced against the previous two weeks.

After finishing regional runner-up to Richards by 30 seconds, Weybrecht said she wanted to remain in better contact with the Maplewood standout through the second mile at states. Weybrecht executed that plan, as the Lady Lancer was one of four harriers remaining in the front pack, separated by 1.8 seconds, at the 2-mile mark.

“I think it was just all my mindset, and I just had to think of all the training I put in and just keep thinking it’s the last race,” Weybrecht said. “I had to stay focused and not let them get away. And even though my legs were so tired after that, I just knew it was my last race and I had to put it all out there.”

Weybrecht held steady through the final third of the race to clock an 18:30.9 and finish third among 177 runners on the 5-kilometer course. Maplewood’s Richards won the title in 18:22.3, while Carey junior and returning all-Ohioan Sarah Reinhart was runner-up in 18:24.

With her performance, Weybrecht matched 2019 graduate Katie Engle – who finished third her sophomore season in a nearly identical 18:30.0 – as the highest placing Gilmour state cross-country runner, boy or girl, in program history.

“My goal was just top 10, so getting third was crazy,” Weybrecht said. “I did not think I would be that far up there. But I think I just had all the adrenalin and stuff where I knew it was my last race.”

Weybrecht ran in fourth for the majority of the race, until she passed Mount Gilead senior Allison Johnson toward the home stretch.

“My legs were done after that,” she said. “I just wanted to help my team as much as I could. So, even if it hurt, I just had to put it all out there and try to keep thinking it’s just one more mile left until this season’s done – just one more mile of hurting, and then it’ll all be done.”

While Weybrecht stole the spotlight, she wasn’t the only all-Ohioan with a top-30 finish for the Lady Lancers.

Running in her fourth state meet, senior Caitrina Barton concluded her high school cross-country career by finishing 27th in 19:36.5 to secure her first all-state honor, propelling the Gilmour girls to fifth in the team standings – their best showing since 2016.

“It was awesome,” said Barton, who was a state scorer for the Lady Lancers the past three seasons but never finished higher than 82nd individually.

“It was a really good feeling,” she said. “Not that I underperformed in the past state meets, but they always went kind of not my way from injuries and whatnot. So, it was really fun to be able to put out a race I was proud of my last year. It was really fun.

“It didn’t feel real the whole time until I was passing the line, and then I just realized that that was it. It was very bittersweet, because I’m going to miss the girls a lot and everything, but I’m so thankful I’ve been able to go four times and its been such a great experience each time. But it was definitely a weird feeling for it to be over all at once.”

The Gilmour girls entered the race favored to finish sixth in the pre-state coaches poll but outperformed Mount Gilead to move up a spot. All seven Lady Lancers ran pretty steady races – they were fifth at all three checkpoints – but Lombardo and Rosko had the best late-race jets. Lombardo passed 32 runners from the mile mark to the finish, while Rosko knocked off nine competitors in her final mile.

“We were really, really happy,” Barton said. “We were just there to give it our all, and I think all of the girls did that. So, seeing that we finished fifth shows that the girls were really working hard and just having a good time before and after. So, we were super proud of each other.”

While Lombardo and Rosko turned on those late jets to help improve their finishes, Barton took a tad of a converse approach.

The lone Lady Lancer senior on the course, Barton said she got out a little bit on the fast side to take advantage of the bottleneck effect out of the gates, and, in turn, she was 14th at the mile mark, before settling in at 23rd and the 2-mile mark and holding on for her all-Ohio finish by four spots, or two seconds.

“The competition always at states is very, very stiff,” Barton said. “You’re running against the best of the best. So, being put in that position, it’s very nerve-wracking the first mile heading out with having girls all around you, but we went out very, very strong.

“And going on to the third mile, I was feeling pretty drowsy, to say the least. My eyes were rolling back, I wasn’t feeling too hot. But I remember hearing my coach, who was like, ‘Alright, Barton, you’ve got,’ however much left I had. And I was just like, ‘Alright, I just really have to get over this final hill and go for it.’”