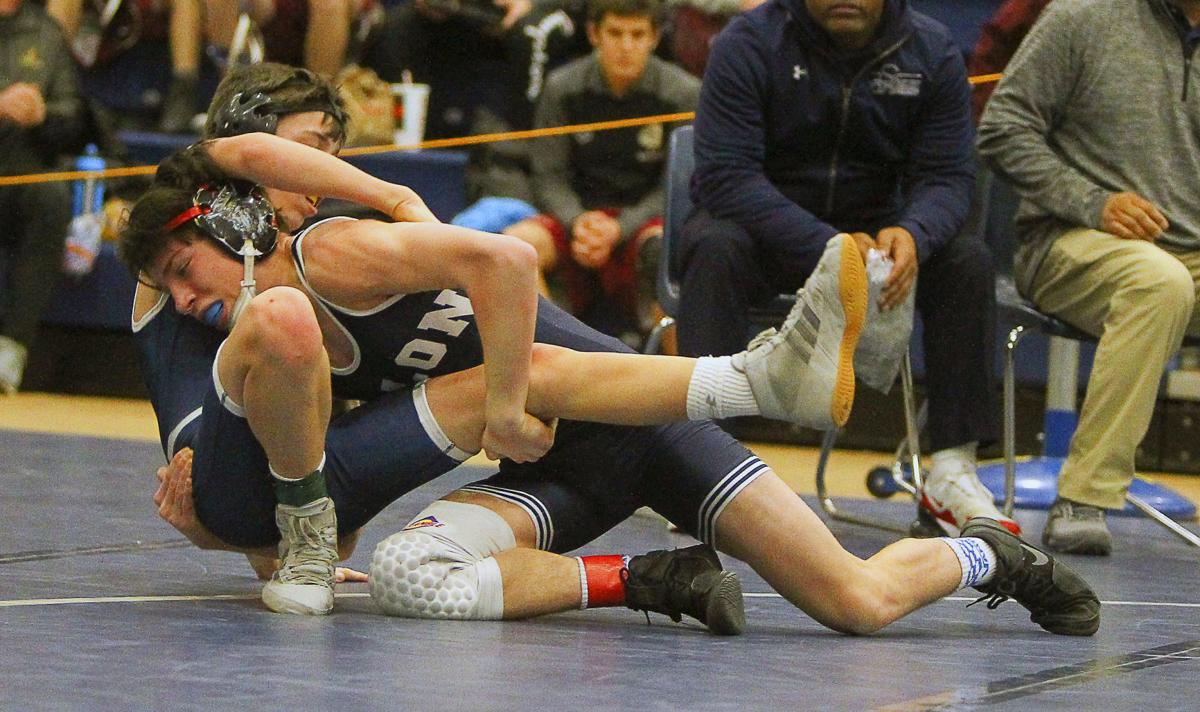 Solon 113-pound sophomore Nick Molchak (right) puts Twinsburg freshman Colin Grady on his back during the Division I sectional wrestling tournament on Saturday at Kenston. The Comet grappler finished runner-up in the 10-team tournament to advance to district competition. 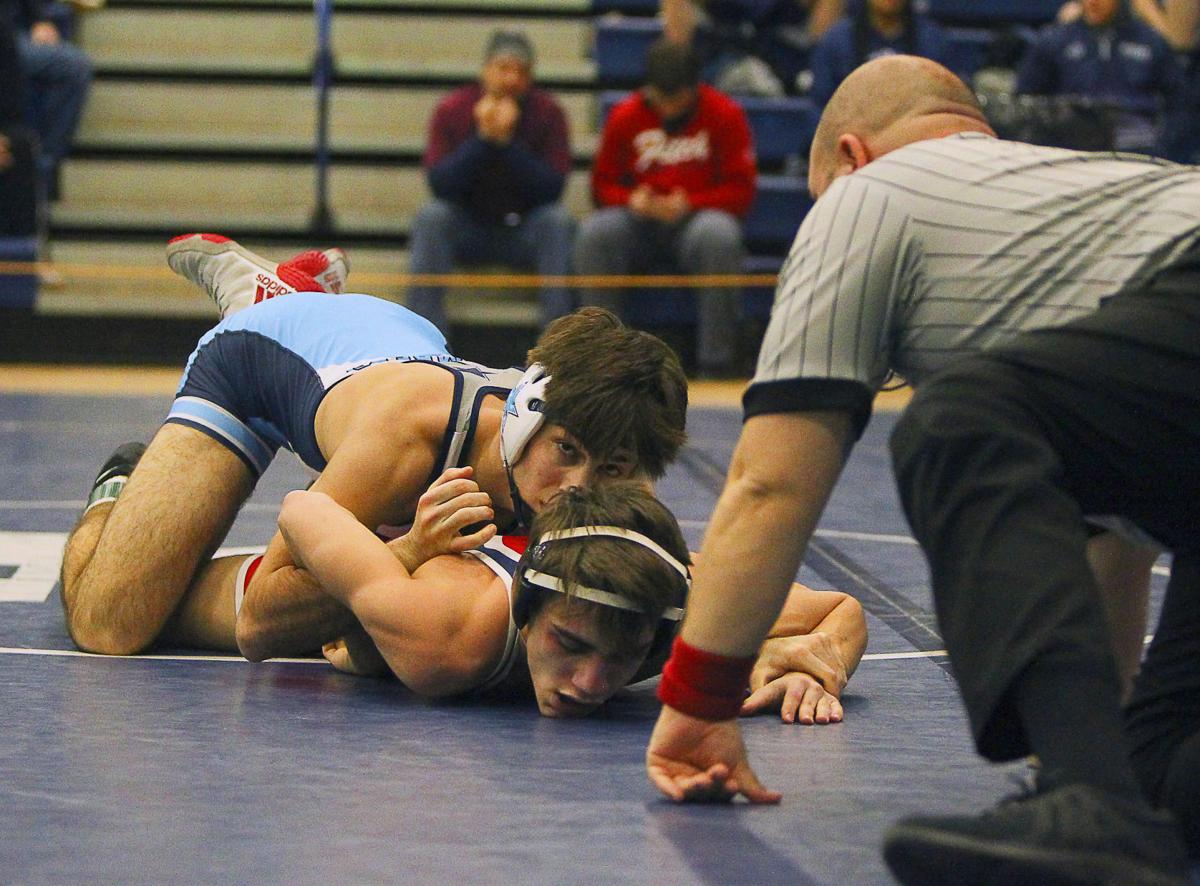 Solon 113-pound sophomore Nick Molchak (right) puts Twinsburg freshman Colin Grady on his back during the Division I sectional wrestling tournament on Saturday at Kenston. The Comet grappler finished runner-up in the 10-team tournament to advance to district competition.

At 160 pounds and ranked No. 14 in the state, according to Boro Fan Ohio, Mack (34-9) cruised to his sectional crown by way of a first-period pin against Kenston sophomore Paul Hamm, a third-period pin against Austintown Fitch freshman Peyton Quarles and a 7-0 decision against Hudson’s No. 25-ranked sophomore Aidan McStay (31-13) in the final bout.

At 145 pounds and ranked No. 7 in the state, Kenston’s Nastasi (36-4) took home gold behind a first-period pin of Nordonia junior Zachary Frye, a 9-1 major decision against Stow-Munroe Falls No. 14-ranked sophomore JR Reed (34-11) and a 5-0 decision against Austintown Fitch’s No. 13-ranked senior Zach Richards (40-11) in the title bout.

Sidelined by injuries, Nastasi is wrestling in the postseason for the first time since his state berth at 106 pounds as a freshman in 2017.

At 120 pounds and ranked No. 13 in the state, Solon’s Gerome (32-15) won his sectional championship by way of a first-period pin against Kent Roosevelt freshman Andy Lawson, a 12-1 major decision against Austintown Fitch senior Marc Judy and a 7-1 decision against Boardman sophomore Dominic Vennetti (28-15) in the title bout.

Overall, Solon finished fifth with 136 1/2 points and six Comet matmen securing top-four finishes to advance to the Division I Mentor District this Friday and Saturday. Mack is projected to finish third and punch a ticket to states, according to Boro Fan.

Ranked No. 19 in the state, Grunzweig won a 4-2 overtime victory against Twinsburg No. 10-ranked senior Ricky Diturno (35-13) in the semifinals, before losing an 8-2 decision against Roosevelt No. 8-ranked senior Sam Tillett (31-2) in the finals.

Ranked No. 11 in Ohio, Molchak lost his title bout by way of a 3-1 decision against Boardman No. 15-ranked sophomore Ray Cmil (34-9). But Molchak is favored to finished fourth at districts for a state berth.

And ranked No. 13 in Ohio, Solon’s Zahoransky lost his semifinal bout, 5-1, against Boardman sophomore Sean O’Horo (38-11), who was ranked No. 15 at 145 pounds before dropping to 138 pounds for the postseason. Zahoransky is favored to finished fourth at districts for a state berth.

In particular, unranked Rottman won his third-place bout by way of a first-period pin against Stow-Munroe Falls state No. 21-ranked sophomore Luke Marconi (15-15).

Nastasi is favored to finished district runner-up and advance to states.

The West Geauga matmen didn’t crown a sectional champion during the 11-team Division II tournament on Saturday at Lake Catholic, but the Wolverines qualified six grapplers to districts with five alternates.

Ranked No. 29 in the state, Moriarty earned first-period pins against Chardon junior Liam Downs and Lake Catholic sophomore Danny Morgan, before losing his title bout by way of a fall against Geneva state No. 10-ranked junior Charles Taylor (39-2).

Ranked No. 16 in Ohio, Alesnik made his way to the sectional title bout with a trio of first-period pins against Shaw junior Jernox Jones, Perry freshman AJ Kifus and Cleveland John F. Kennedy freshman Cameron Johnson, before losing by fall against Chardon No. 18-ranked senior Jaret Hall (17-5).

Leading Orange, which finished sixth as a team with 100 points, state No. 22-ranked 132-pound sophomore TeAndre Allen (15-2) took home a sectional title by way of a second-period pin against Copley junior Nathan Hazlett, a 9-2 decision against Revere junior Bobby Baker and a 4-1 decision against St. Vincent-St. Mary No. 21-ranked freshman Jake Keirn (24-13).

Meanwhile, Orange No. 14-ranked 126-pound senior Yury Pozdneev (38-2) finished third in the sectional, losing only a 6-4 decision against Copley state No. 4-ranked junior Kyren Butler (39-4) in the semifinals. But Pozdneev is favored to finish fourth at the Alliance District to punch his state berth.

Olson’s lone loss came by a fall against Aurora state No. 7-ranked Ethan Anderson (34-8) in the semifinals, before he rebounded with two pins in the consolation bracket.

Hawken School wrestling got to work with a trio of champs and two bronze medalists during the 14-team Division III Berkshire Sectional on Saturday in Burton.

Ranked No. 5 in the state, the younger Reineke (29-1) got a bye in the quarterfinals, before winning a first-period pin against Liberty freshman Connor Burns and a 3-1 overtime decision against Chalker No. 7-ranked freshman Landen Duncan (24-5) in the title bout.

Ranked No. 7 in Ohio, the elder Reineke (23-4) pinned Liberty freshman Joe Mueller and Berkshire freshman Johnny Heiden, before winning a 3-1 decision against Garrettsville Garfield No. 16-ranked freshman Hunter Andel (35-9) in his title bout.

Also ranked No. 7 in Ohio, Hawken’s Lindsey (36-2) put a first-period pin on Brookfield senior Kyle Wedge, won a 1-0 decision against Pymatuning Valley No. 27-ranked junior Victor Verba (24-6) in the semis, and then posted a 5-1 decision against Kirtland No. 11-ranked senior Jeff Kusar (29-4) in the title bout.

Entering the Division III Garfield Heights District, the younger Reineke and Lindsey are projected to win titles and the elder Reineke is projected to finish runner-up for return trips to states.