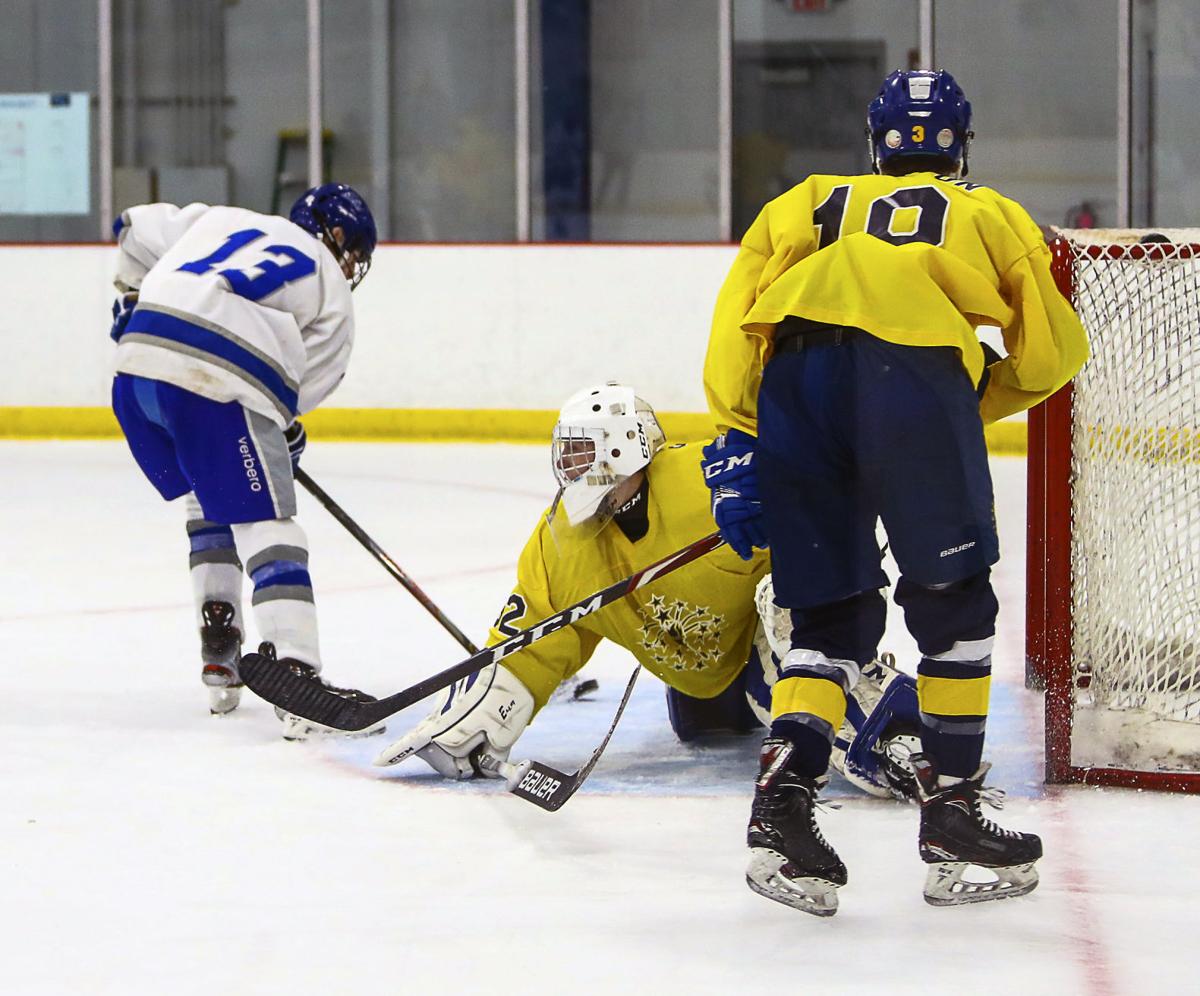 Gilmour Academy senior center Justin Evans (No. 13) finishes off a backhanded lamplighter to provide the Ice Lancers a 2-1 lead against Team Indiana with 1:25 remaining in the first period. 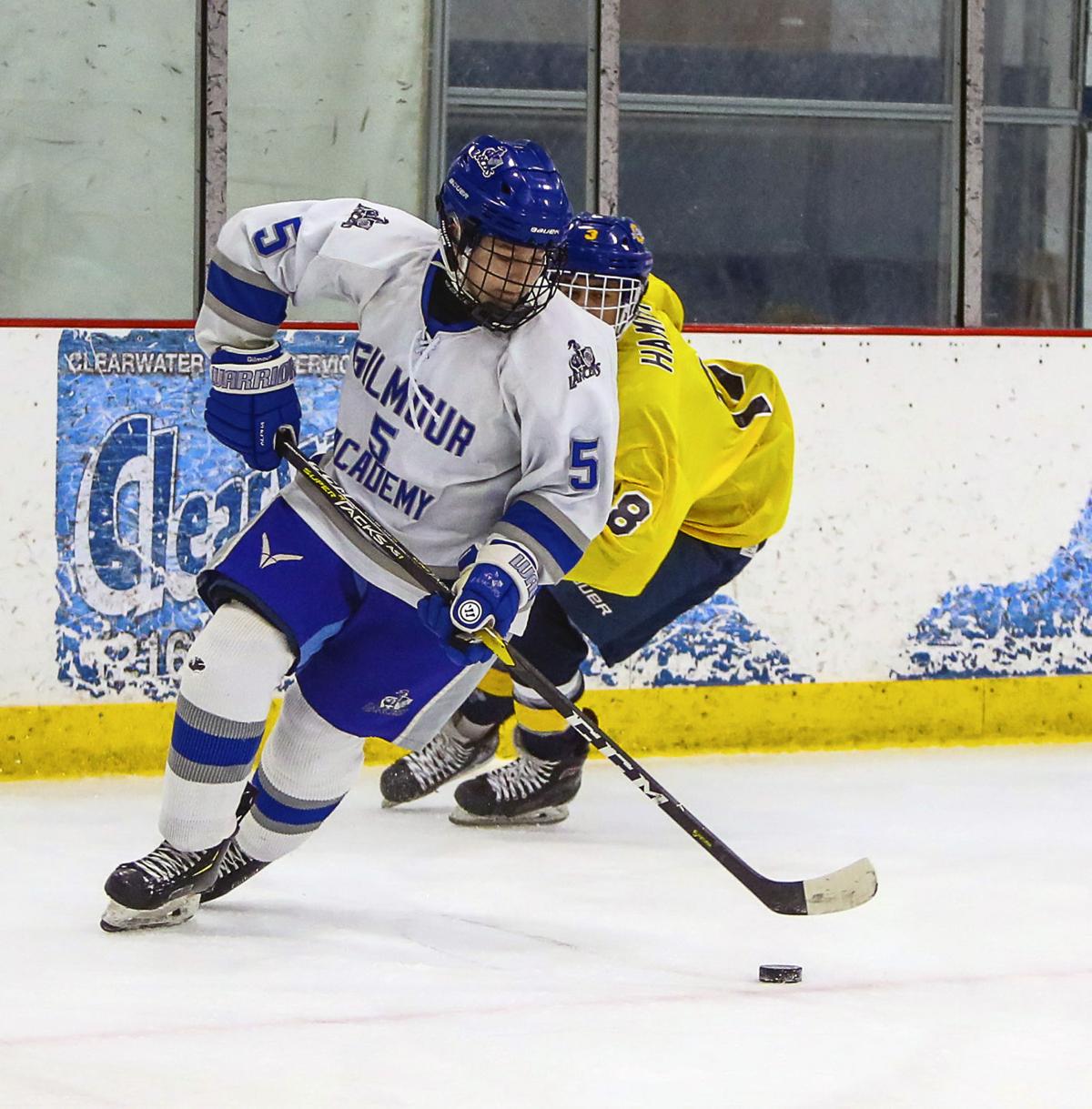 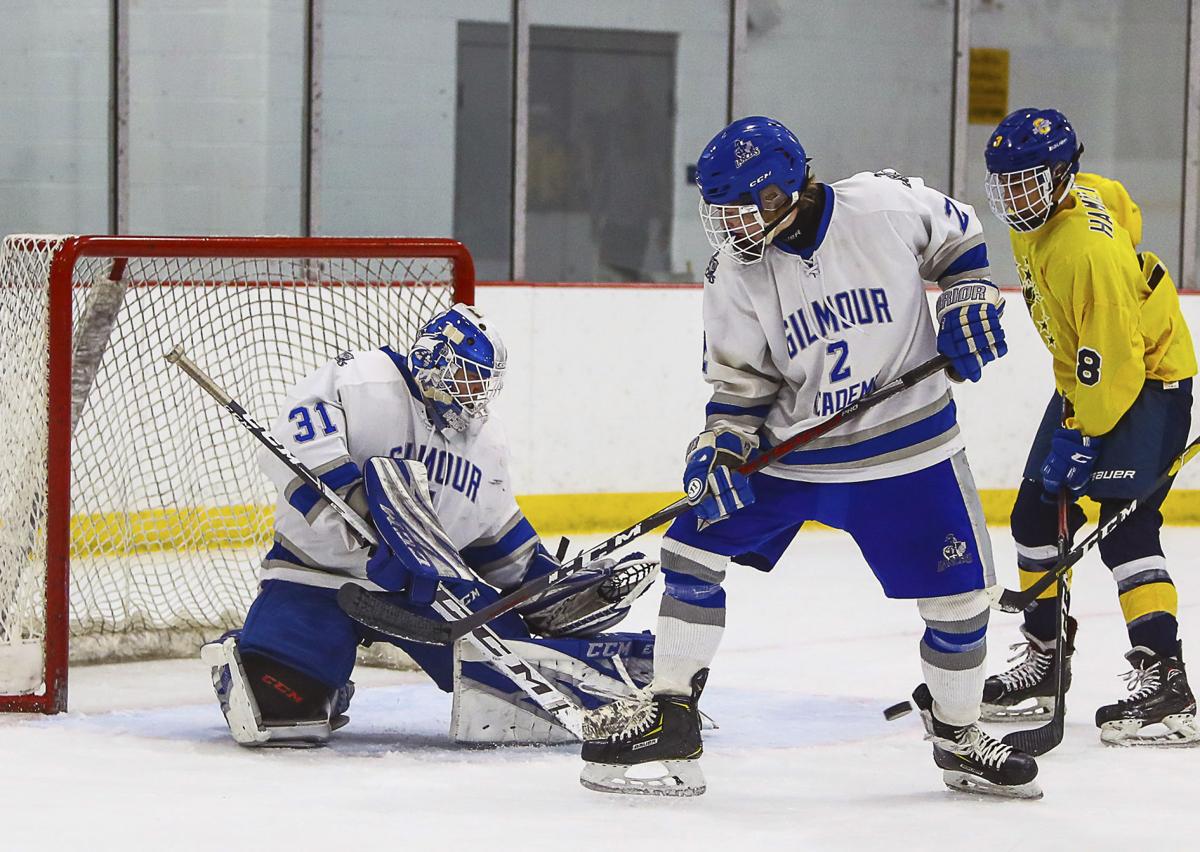 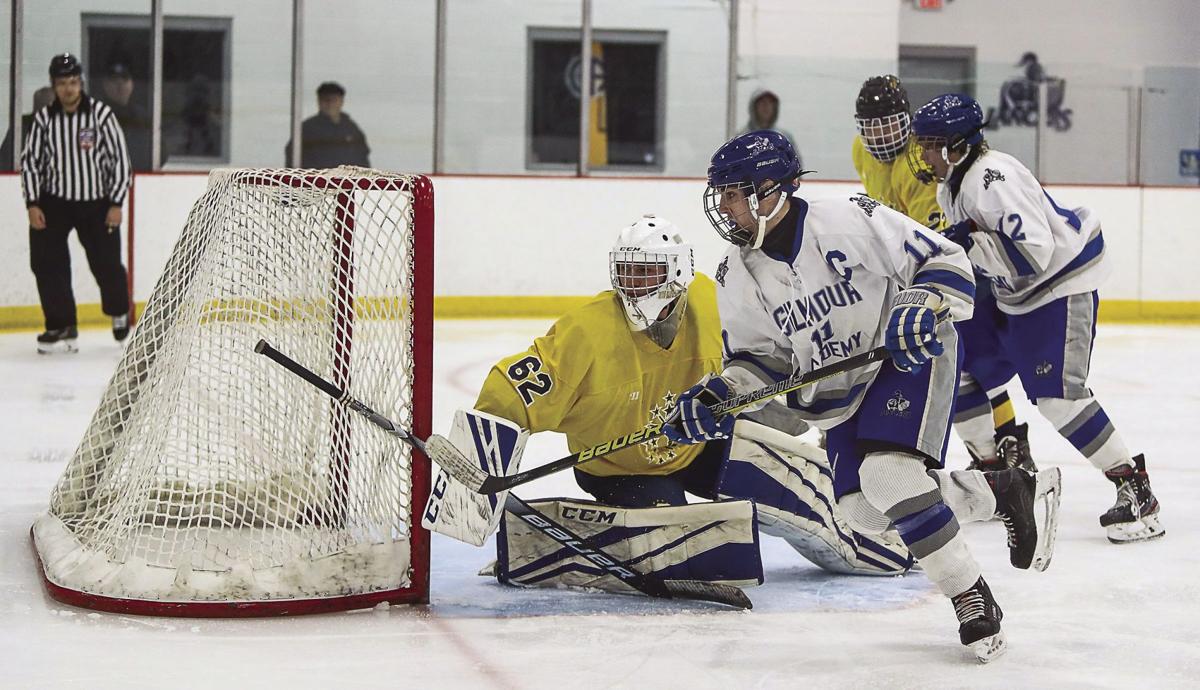 Gilmour Academy senior captain Bryce Hofstrom chases a rebound on the back boards after a save by Team Indiana junior goalie Zak Szumski during the Ice Lancers’ 4-2 victory in the 21st Brother James Memorial Tournament on Sunday afternoon at their home arena in Gates Mills.

Gilmour Academy senior center Justin Evans (No. 13) finishes off a backhanded lamplighter to provide the Ice Lancers a 2-1 lead against Team Indiana with 1:25 remaining in the first period.

Gilmour Academy senior captain Bryce Hofstrom chases a rebound on the back boards after a save by Team Indiana junior goalie Zak Szumski during the Ice Lancers’ 4-2 victory in the 21st Brother James Memorial Tournament on Sunday afternoon at their home arena in Gates Mills.

When a hockey player gets knocked out of the game on a penalty, the ensuing power play is an opportunity for his teammates to make the opposing team pay for it on the scoreboard.

Gilmour Academy (13-5) owned a 2-1 upper hand against Team Indiana in the second period during the Ice Lancers’ consolation game of the 21st Brother James Memorial Tournament on Sunday afternoon at their home arena in Gates Mills.

After going down, 1-0, less than a minute into the game, Gilmour Academy answered with back-to-back lamplighters late in the opening period, the latter of which senior center Justin Evans showcased his puck-handling craft.

An alternative captain for the Ice Lancers, Evans picked up the rubber in transition off the right boards, had a clear path to cage, put the deke on junior goalie Zak Szumski’s glove side and finished off a backhand at the backdoor for a 2-1 lead with 1:25 to go in the first period.

“It was tough to lose him in the second period for that injury,” Roddy said of Evans. “He’s always the guy to help lead us in warm-ups and get focused for each game. But we knew that we just had to get through it.”

Evans played some defense during Gilmour’s 31-5-2 campaign last year, but, with the Ice Lancers graduating five of their top nine forwards, he made this transition to forward this season.

Midway through the second period on Sunday, Evans took a blindside hit in open space and went down to the ice without getting up. He eventually skated off to exit the game and did not return.

The Lancers showed some fire on the ensuing two-minute power play, but Gilmour didn’t get a single shot off on goal. The scored remained, 2-1, with 4:51 to play in the frame.

“We know that (Evans) is a big offensive presence for us, and he gets a lot of our goals and points,” said senior captain Bryce Hofstrom, who vacated his spot as a right winger on the first shift and moved to take over Evans’ spot at center on the second shift.

Through 15 games, Evans led Gilmour in both goals, 10, and assists, 13, for 23 points on the season, not to mention the fact that he has spent just two minutes in the penalty box.

“So, him going out just meant the rest of us needed to step up, because he really is a big difference for us when he’s out on the ice,” Hofstrom said. “He just knows what to do with the puck. And him going down was a blow. It meant the rest of us all had to work a little harder. And when I moved down to fill in for him, I knew there were some big shoes there.”

While Gilmour runs three lines with five offensive players new to varsity hockey this season, the Lancers’ third shift of junior veterans Charlie Tuggey and Kessel Richards and junior newcomer Frankie Valenti has produced the most goals this season.

In particular, Valenti finished off a backdoor, glove-side lamplighter for a 1-1 equalizer in the first period against Team Indiana, which came on a rebound opportunity off starting sophomore defenseman Vince Stafford’s shot from the point.

“We talked a lot about that before the game – about getting dirty goals,” Gilmour 15th-year head coach John Malloy said. “We haven’t been scoring a lot lately. So, getting to the net, getting tips, getting rebounds is what we want, and that’s exactly what it was.”

Stafford is one of three varsity veterans on defense, also including senior captain Anthony Iacobell and senior Jake Howse, which opened the door for Evans to get his opportunity on offense.

And with junior goalies Toby Herlong, 95.4 save percentage, and Dylan Stefan, 93.7 save percentage, splitting time in cage, the Lancers have been able to hang their hats at the defensive end of the ice with three straight shutouts entering their home tournament.

While Herlong turned away a breakaway opportunity by Team Indiana junior forward Owen Ott in the first minute of the second period on Sunday, Team Indiana got loose on another breakaway with senior Josh Merriman finishing off some top cheese, stick side, for the 2-2 equalizer with 4:17 to go in the frame.

“Toby saves us so many times that we knew we had to go back out there and get one back for him,” Roddy said.

In the third period, Roddy was shielding goalie Szumski when Lancer sophomore defenseman Max Treppo ripped a slap shot from the point that was tipped by a Team Indiana defenseman and found its way under Szumski’s blocker and into the back of the net for Gilmour’s 3-2 upper hand with 13:26 remaining.

“I was just trying to blind the goalie so he couldn’t see,” Roddy said. “I tried to get a redirect on it, but I just missed it. So, my main goal there was just to not let the goalie see the puck and let Max get it through.”

Less than a minute later, Gilmour was called for a minor and killed off its third penalty of the game.

Still up by one goal with four minutes to play, the Ice Lancers had the opportunity to put the game to bed with 1:42 of a five-one-three power play, but they could not capitalize.

“We obviously would have liked to put in another goal, but when we had that five-on-three, it was really fun because (Roddy) and I were in front of the net and they were all over us,” Hofstrom said. “They were hitting us in the legs and arms, and we were creating so many opportunities. That’s the fun part, because you don’t get to do that a lot.”

Tuggey did send a diagonal feed from the point to wide-open sophomore defenseman Connor Underwood on the backdoor during that power play, but Underwood came inches shy of lighting the lamp.

While the physicality was chippy throughout the third period, guys like Hofstrom, who received the Brother Robert Lavelle Sportsmanship Award, and Roddy maintained their composure without retaliation.

“I’d like to think I’m pretty good at keeping my head level while I’m on the ice,” Roddy said. “I really didn’t want to put us on the kill in that position, when we were only up one. So, I didn’t want to take that away from us, even though I was getting hit in front of the net.”

Team Indiana pulled its goalie with a minute to play, but Gilmour weathered the six-on-five storm with the puck finally getting loose on the boards for Robertson to take the other way and deposit an empty-netter with one second remaining for the 4-2 Lancer victory. Gilmour outshot Team Indiana, 30-20.

Overall, Gilmour finished 2-2 in its home tournament, winning a 6-0 game against Baldwin, Pennsylvania, on Friday, before losing back-to-back overtime games against Upper Arlington, 1-0, and Orchard Park, New York, 3-2, on Saturday.

“The reaction from losing those two games was motivating,” Hofstrom said. “We’ve been on a good streak these past couple years with our teams doing really good. And just having those two loses in the same day is very rare for us. I think it just made us more motivated to go out today and get the win, even though it wasn’t for a trophy – just to get bragging rights.”

And when Gilmour played state No. 2-ranked Upper Arlington (18-0) in tournament play on Saturday, the scored was 0-0 at the end of regulation, with Herlong making 27 saves before the Golden Bears netted a two-on-two, sudden-death tally in double overtime.

In a unique fashion of overtime play during the Brother James Tournament, Gilmour also lost a triple-overtime battle against Orchard Park, with the game-winner being scored during one-on-one play.

“There’s so many good things that happened in this tournament,” coach Malloy said. “We ended up tying the two games and losing in the strange overtimes. So, it was the verge of being a really good tournament in terms of success.

“But what I liked about it was that we got put in some situations that should help us down the road. And it reinforces that at times you can play pretty good and lose.”