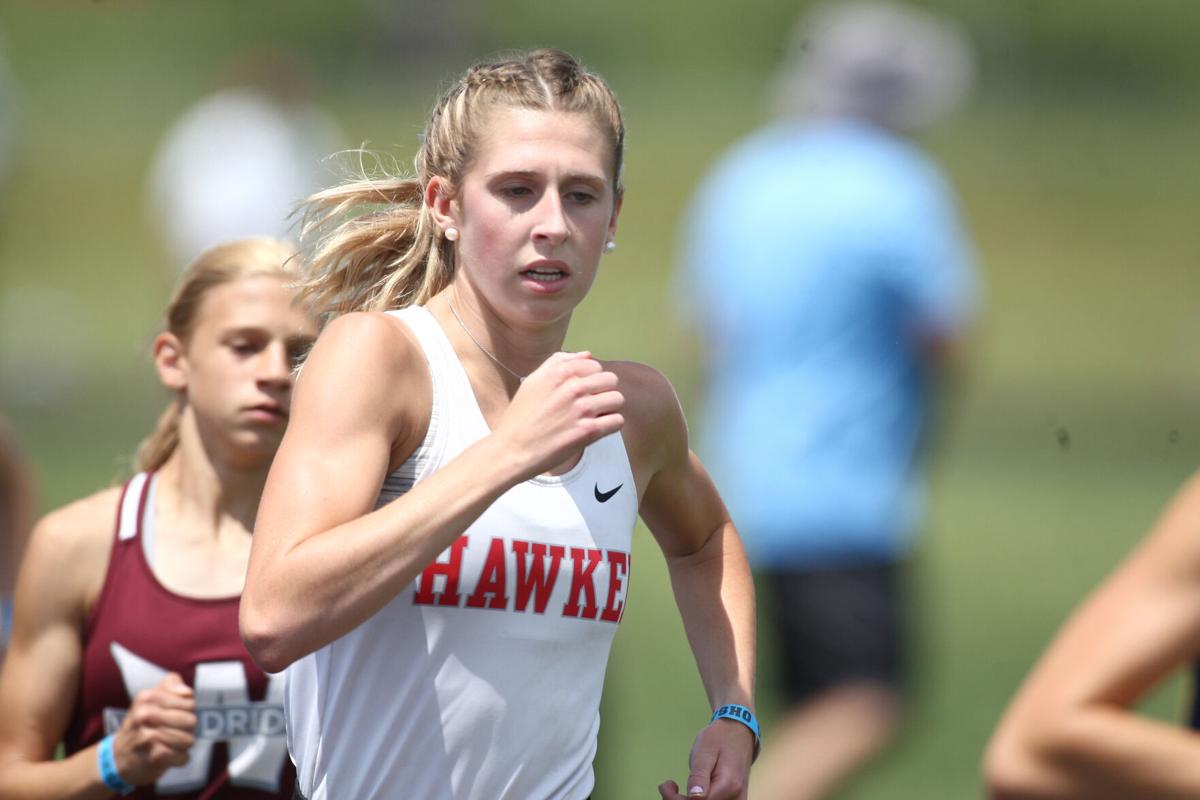 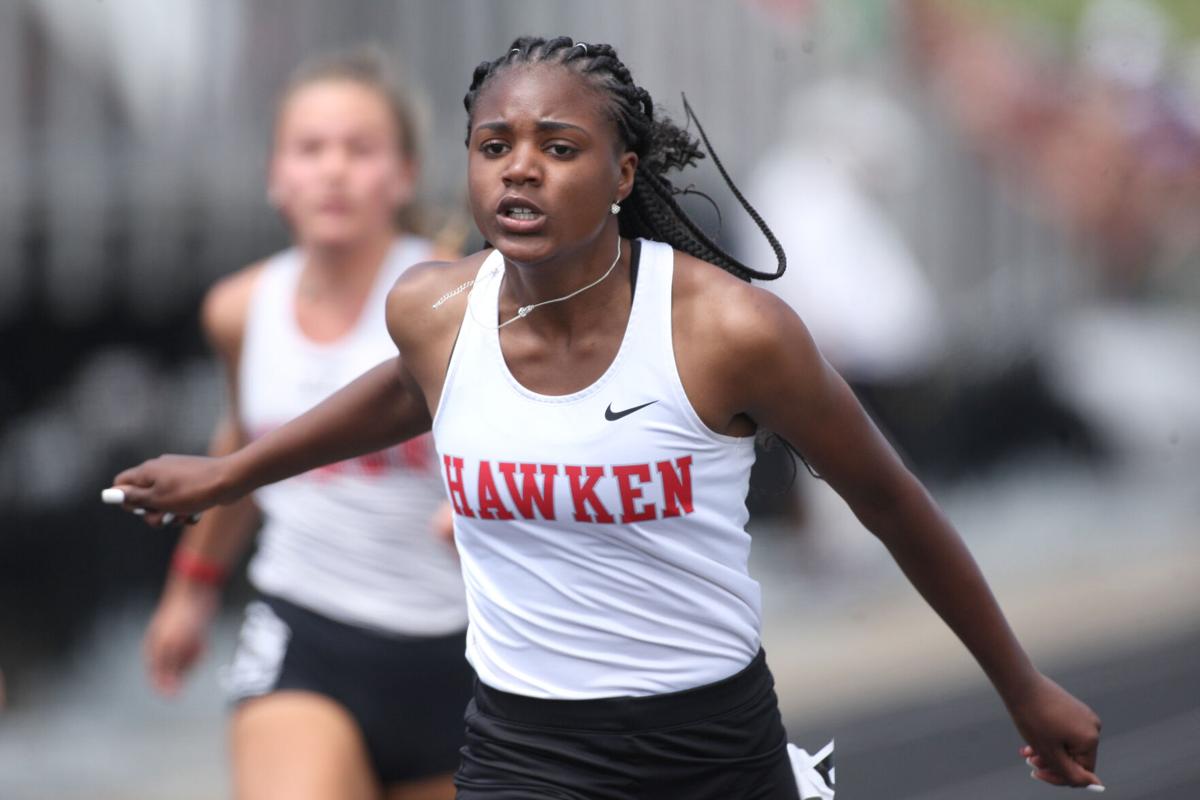 Two years after missing the state meet due to injury White (above) returned and medaled twice in two events last weekend.

Two years after missing the state meet due to injury White (above) returned and medaled twice in two events last weekend.

The rainy weather at the Division II regional track meet on May 29 in Youngstown made for some questionable running conditions. It did not phase Hawken Hawks’ senior Ella Gilson much as it was business as usual for her by qualifying in four events at the state track meet for the first time in her career. She admitted that she actually preferred the rain and wind compared to the hot sunny weather at the Division II state meet last weekend at Pickerington North High School.

Gilson’s last state meet was a memorable one as she helped Hawken’s 4x800 relay place eighth, while placing fourth in the 1600 and third in the 3200 last weekend at the state meet.

The Hawks’ senior had carved out an illustrious career after capturing five medals during her first two state meets including a first-place finish in the 1600 meter run during the 2019 event.

She had a lot of work to do as she first ran in the 4x800 relay followed by the 4x400 preliminaries and if all went well she’d be competing in the 4x400 finals the next day after running in the 1600 meter and the 3200 meter events.

Gilson got off to a solid start as her strong performance as anchor in the 4x800 relay helped catapult the Hawks’ quartet of herself, seniors Julianna Metz and Lena Sylvan and freshman Leila Metres to an eighth-place finish with a 9:36.41 time. The Hawks trailed throughout the entire race but Gilson came on strong at the end and passed several runners.

Unfortunately things did not go as planned in the 4x400 as the Hawken quartet of Gilson, juniors Rosie Murray and Makayla White and freshman Leila Metres missed out on the final by placing third in the third heat with a 4:05.05 time. When all the times of every heat were calculated the Hawks missed out on the finals by just one spot.

When she started her 1600 run, Gilson explained she did not want to be leading after the first lap and planned to come on strong at the end.

She began the race at the front of the pack but soon began to lag behind junior Grace Hartman of Oakwood. Hartman remained out in front and Gilson could not catch her, falling short of repeating as state champion by taking fourth place with a time of 5:02.44.

“I did not run as I wanted to,” said Gilson. “I am not going to lie. I am a little disappointed but I am still happy that I had a great career and we got to come to states this year.”

Gilson closed a brilliant career by taking third place in the 3200 with a 11:06.08 finish. She finished with eight total medals in three years of track at Hawken. The Hawks placed sixth at the state meet with a total score of 25 points. Hawken was two points shy of qualifying for a three-way tie for fourth place alongside the Gilmour Academy Lancers and the Stuebenville Big Red.

“These four years have been great. I love my teammates and coaches so much and Hawken has done so much for me,” said Gilson. “I could not be more grateful. I have loved being with the team so much. It is crazy that I am a senior and this is my last state meet.”

Gilson’s next chapter will take her to Harvard University where she will focus primarily on track and cross-country. She also competed in swimming during her time at Hawken but has decided to pursue long-distance running at the college level. With Gilson’s final page being completed a new chapter was written as the junior White stepped up. After qualifying for three state events at the regional tournament, she placed fourth in the 100 and second in the 200 on Saturday afternoon. White qualified for the 100 after finishing in second place in the second heat of the preliminaries on Friday afternoon with a 12.17 finish and then qualified for the 200 with by placing first with a 24.81 time in the first heat the day before. White finished her day competing the 4x400 preliminaries by serving as the anchor but came up short of sending her relay team to the final. From the moment White took the baton it was evident she did not have much left in her tank leading to a lackluster finish.

White said she was not a happy camper after she finished fourth in the 100 with a time of 12.39 on Saturday afternoon. Senior Chante Clinkscale of Niles McKinley finished first in the race with a 11.86 time. White said she did not get an aggressive jump out of the box leading to an underwhelming finish for her standards. She added that after her 100 it was very important she finish her day better than she had started. She did just that by placing second in the 200 with a time of 24.81.

“I was a little upset with my fourth place finish in the 100 meter dash earlier so I was happy I could come back and shake that up to get a state runner-up,” said White.

The Hawken junior got a better jump this time and was neck-and-neck with Clinkscale the entire race. White explained she could feel Clinkscale breathing down her neck and junior Kya Epps was also hot on her tail but stayed disciplined with her form to cross the finish line in second place. She said she was overall pleased with how she performed at her first state meet and is hoping the experience she gained will help her improve for next year’s state meet.