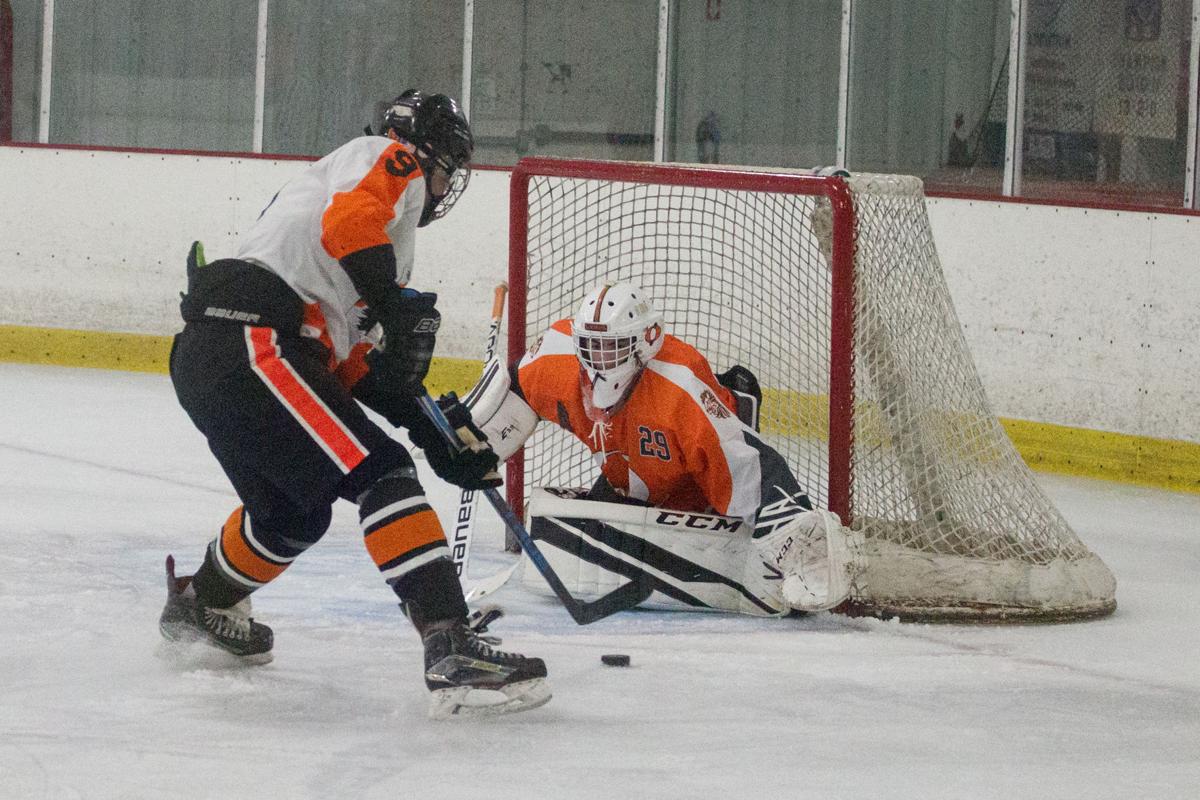 Orange junior goalie Danny Moore makes a point-blank save against Chagrin Falls junior forward Garrin Bunker during the Ice Lions’ 6-0 victory, with five goals coming in the third period, of a Blue Division battle in the Greater Cleveland High School Hockey League on Friday night at The Pond in Auburn. 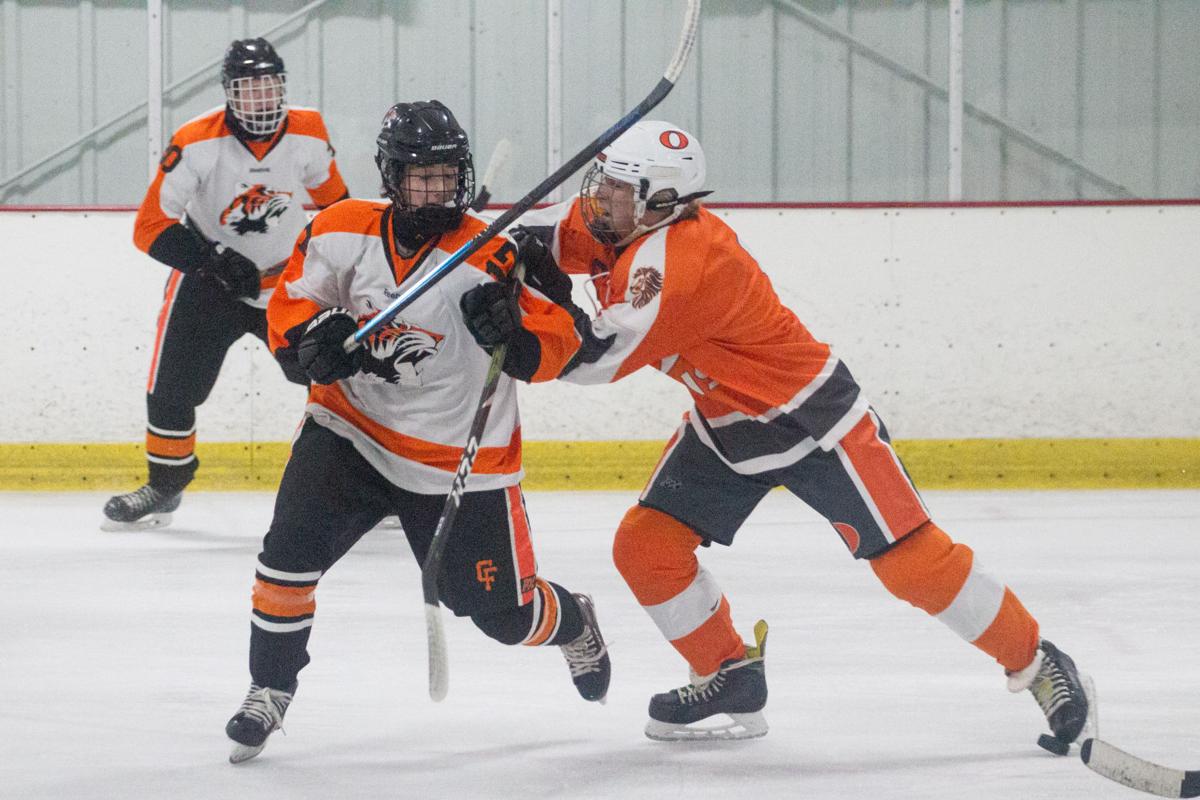 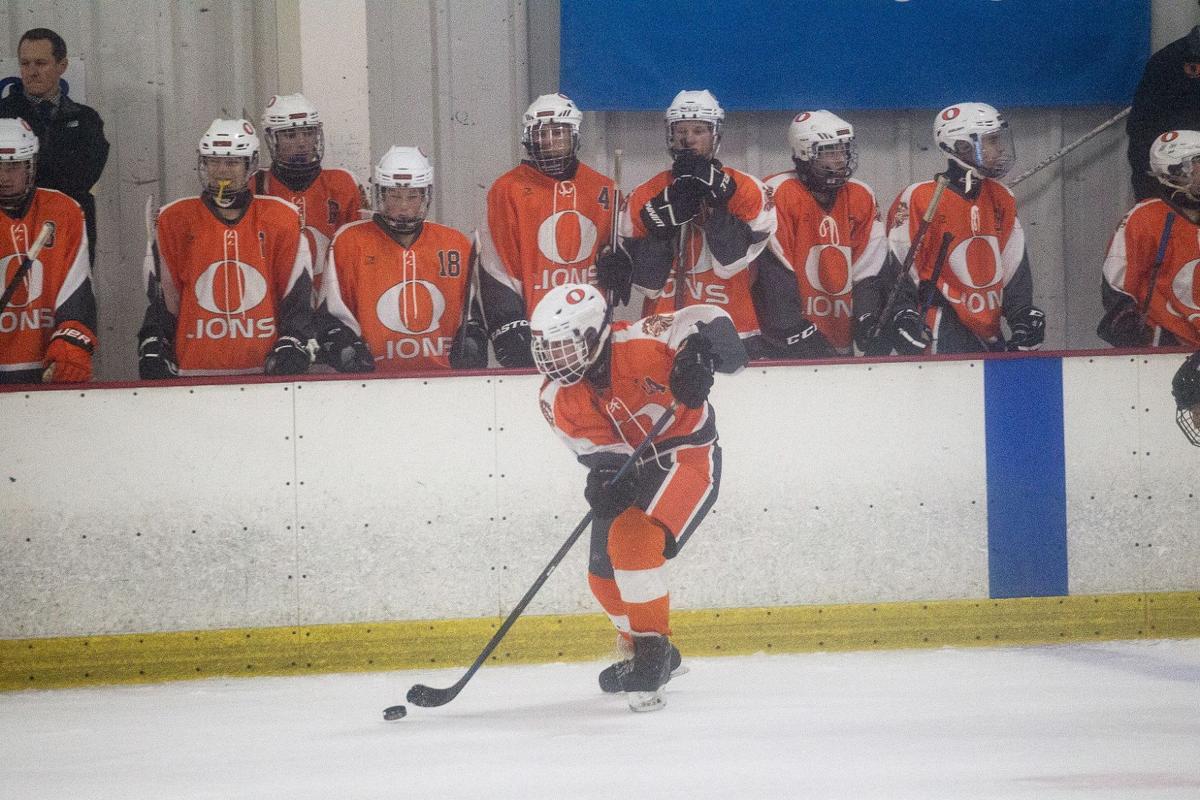 Orange junior forward Jason Kornbluth brings the rubber up the wing during his hat-trick performance in the Lions’ 6-0 victory against Chagrin Falls.

Orange junior goalie Danny Moore makes a point-blank save against Chagrin Falls junior forward Garrin Bunker during the Ice Lions’ 6-0 victory, with five goals coming in the third period, of a Blue Division battle in the Greater Cleveland High School Hockey League on Friday night at The Pond in Auburn.

Orange junior forward Jason Kornbluth brings the rubber up the wing during his hat-trick performance in the Lions’ 6-0 victory against Chagrin Falls.

Orange junior forward Jason Kornbluth lit the lamp to the Lions’ hockey season in the first minute of play against league rival Chagrin Falls on Friday night at The Pond in Auburn Township.

A second-team all-Greater Cleveland High School Hockey League selection in the middle White Division last year, Kornbluth is fixing to be a top offensive threat for Orange on the ice this winter.

That first tally was the aftermath of three or four Orange sticks touching the puck in the offensive zone with a couple shots going on cage followed by a dirty, nasty rebound finish through the five-hole for a 1-0 lead, second-year head coach Mike Teplitzky said.

“I mean, they count the same as a snipe off the crossbar,” he said. “So, I’m never upset about that.”

But the rest of the first period and the entire second period featured a defensive struggle, with Orange third-year junior goalie Danny Moore and Chagrin Falls returning junior goalie Charlie Gunn putting up walls in their respective cages without allowing any goals for the next 30 minutes. Both gentlemen earned all-league accolades last season.

With both teams competing in the lower Blue Division of the GCHSHL this year, the battle remained 1-0 in the Lions’ favor at the second intermission.

“It was real even hockey, real clean hockey; one penalty apiece,” Teplitzky said. “And then something in the third clicked. I didn’t even really do much talking in the locker room. I kind of let my captains talk that out. I just said, ‘We’ve got to figure it out. We’ve got to outhustle and outwork them.’ And they went out in the third, and I think we took five shots and all five went in.”

Kornbluth went on to bury two more goals on low, blocker finishers in the third period to collect a hat trick and help propel the Lions to a 6-0 victory, while senior defenseman Tommy Hill, a team captain, and sophomore forwards Jackson Fellinger and Jack Stover scored one goal apiece. Starting to skate a little over a year ago, Stover’s tally was his career first.

The third-period goals weren’t just pucks rolling in, but rather a good variety of shots and finishes that the Lions earned, including snipers, slaps and one-times on the crease, Teplitzky said.

“You know these games when you see it, where we scored early and then never again for almost 30 more minutes,” the coach said. “And one of my freshmen defensemen put it real well in the locker room between the second and third.

“He said, ‘Doesn’t this feel like a next-goal-wins kind of game?’ And, I mean, we were all feeling it; that we needed that second one. If they tied it up, it’s anybody’s. Once we got the second and then the third real quick after, you kind of felt the momentum swing.”

Coming off a 10-17 campaign from last season, Orange graduated a pair of top goal scorers in Justin Beachler and Matt McCusky.

Against Chagrin Falls, McCarren had a playmaker showing with three assists.

“You can talk about really skilled players all you want, but those three communicate really well,” Teplitzky said. “It’s difficult to get high school players to do that, but they talk so well, go where they’re supposed to be and put goals together that way.”

With a hat trick against Chagrin Falls, Kornbluth, in particular, doesn’t waste shots, the coach said. He doesn’t miss the net, and he doesn’t hit the goalie in the chest crest. He has the discipline and the patience to wait for good, hard, low shots.

“The best part of our team is that I don’t think we have anyone going coast-to-coast and scoring goals without anyone touching it,” Teplitzky said. “(Kornbluth) knows where to be, goes to the right places – not where the puck is, but where the puck is going to be. He gets the puck to teammates and finds open ice.”

Leb is a heart-and-hustle guy, Coker plays some center on the second shift and is a part of the Lions’ power play, and Mirfendereski is in a similar boat as Stover in terms of just learning to play hockey last season and working his way to becoming a scoring threat for the Lions.

On defense, Orange graduated Kyle Haddon and moved Fellinger to forward, but team captain Hill will be holding down the fort with sophomore returner Ajay Deshpande as well as freshmen Max Sigel and Jake Henkel on the ice this season.

“He also plays some center,” Teplitzky said of Hill. “I could ask him to play goalie. I could ask him to take the sticks and fill the water bottles. If it would help us win, he would do it. That’s why he’s a captain.

“But when you ask coaches who gave them tantrums playing against this season, you’ll hear about Max Sigel. He’s a freshman. He’s really, really good, just sees the ice real well with a very high hockey IQ.”

The biggest puzzle for most teams in league play, however, will be a matter of solving goalie Moore, a first-team all-GCHSHL selection in the White Division last year.

Teplitzky said he told Moore that he still has another level he can play at this season that nobody has seen, where nothing gets by him and he’s out of this world. Moore seemed to have found that level in the shutout against Chagrin, the coach said.

“I think he had about 20 saves, but the misleading thing about that is, as good as we played on paper, he stopped about three or four breakaways, including a two-on-zero and several odd-man rushes,” Teplitzky said. “I don’t feel like it’s a hyperbole to say that’s the best game I’ve seen him play since I’ve been his coach. He was kind of on another level.”

Despite Chagrin’s loss, the Ice Tigers bounced back under sixth-year head coach Jim Revak and defeated division foe Westlake, 4-1, on Sunday in North Olmsted, with a pair of first-period lamplighters by junior defenseman Reed Dowling and sophomore defenseman Charlie Cimperman.

Up next, Orange and Chagrin Falls will play in Normandy High School’s Bruce Anderson Memorial Tournament, starting Friday at the Ries Ice Rink in Parma.