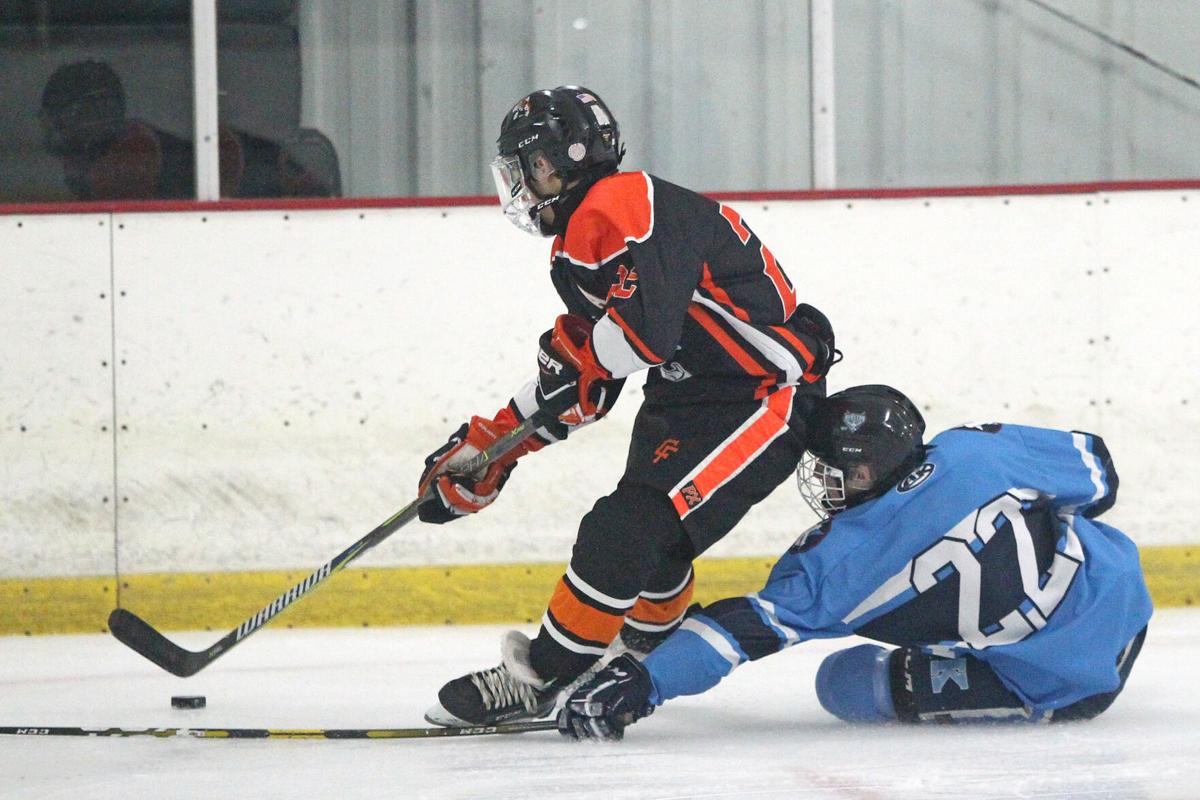 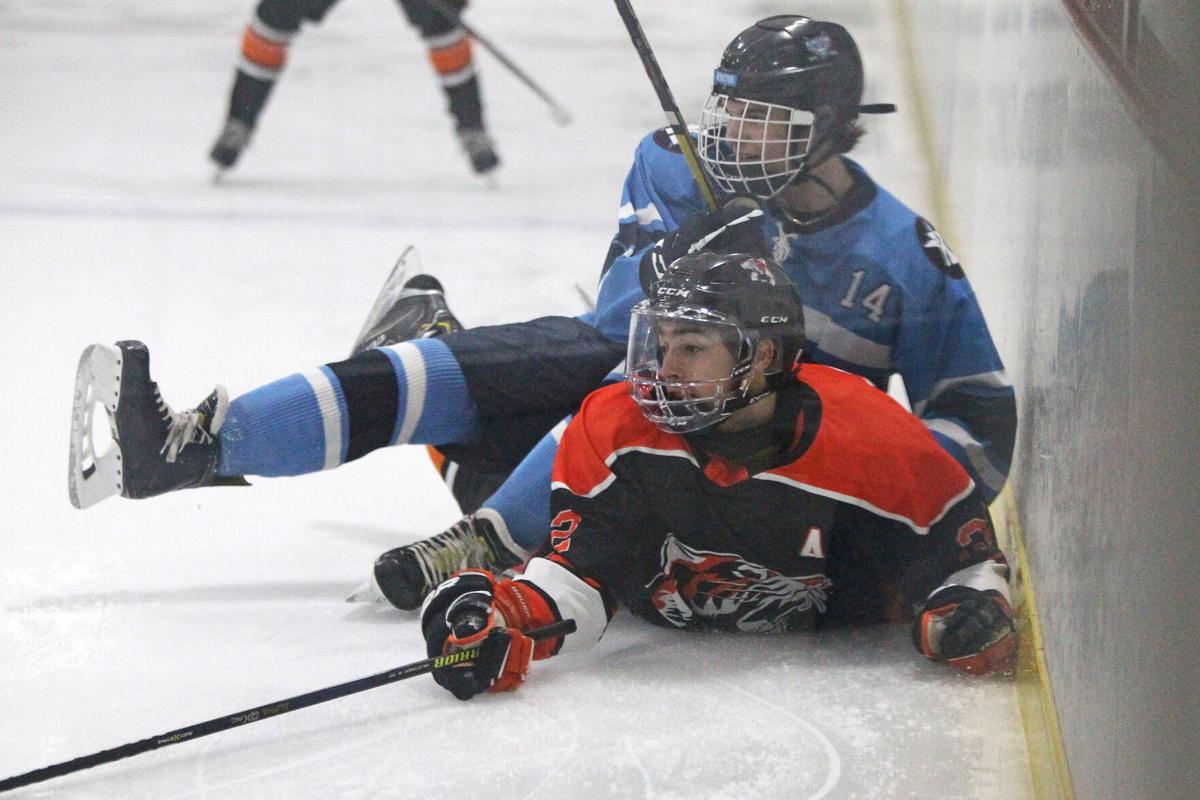 Tigers’ defensemen Alex Newton and Bombers’ junior forward Carson Forte looking on after colliding with each other in the contest on Jan. 9. 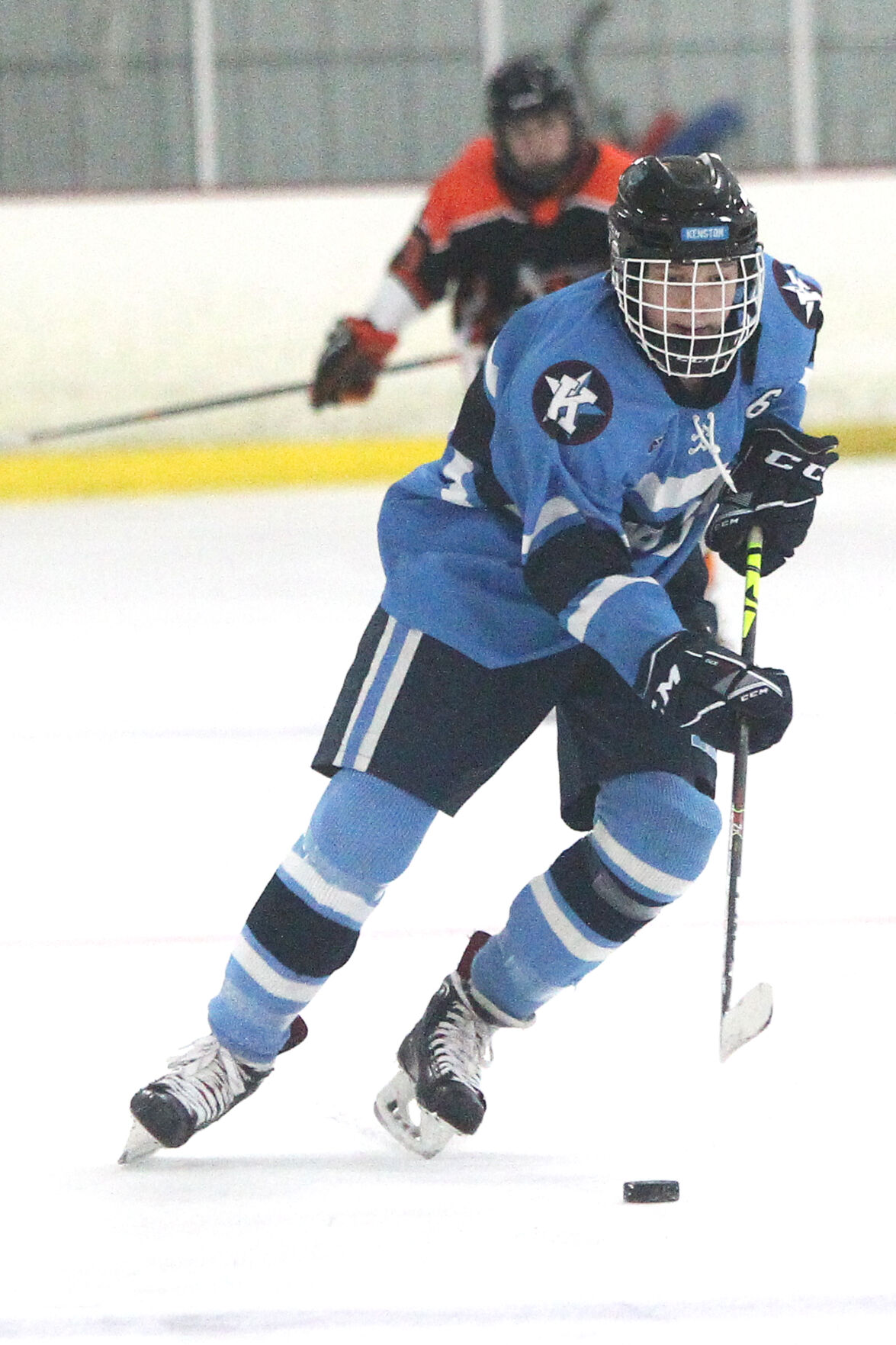 Kenston forward Jackson Keen tries to create some offense in the game the previous Saturday night in Auburn.

Tigers’ defensemen Alex Newton and Bombers’ junior forward Carson Forte looking on after colliding with each other in the contest on Jan. 9.

Kenston forward Jackson Keen tries to create some offense in the game the previous Saturday night in Auburn.

The Chagrin Falls Tigers’ hockey team needed a spark after two challenging games last weekend. Both games saw Chagrin Falls let leads slip away late resulting in an overtime loss to Orange and a tie to Olmsted Falls. The Tigers got back to their winning ways on Jan. 9 with a decisive 8-2 victory over neighborhood rival Kenston Bombers at the Pond in Auburn Township.

The rivalry between the two teams had trended in the Kenston’s favor over the past several years as the Bombers held an eight-game winning streak over Chagrin Falls and had captured 15 victories over the last 16 meetings dating all the way back to the 2009-2010 campaign. The Tigers had not managed a win since the 2012-13 season.

The two programs are going in opposite directions though as Chagrin Falls is on the rise while Kenston is starting to rebuild as the team saw eight seniors graduate last season and brought in a first-year head coach in Tom Moores. The Bombers are just not the same powerhouse that they’ve been in years’ past.

“A lot of these kids this year they’ve been here two-to-three years but never really in a prominent role,” said coach Moores, “They’ve had other kids they’ve relied on in the past and this year they’re being asked to step up and they’re playing every other shift. The game experience for them is going to be invaluable for them moving forward.”

The Tigers got off to a fast start as senior forward John Ranieri lit the lamp in the first period by one-timing the puck into the net. Fellow senior forward Garrin Bunker had the apple after dishing it out from the corner to Ranieri in the slot.

The Bombers held an advantage in the second period during a power play after Tigers’ senior forward Matisse Despres was whistled for tripping and sent to the penalty box for two minutes. That wasn’t going to slow Chagrin Falls down.

Even with a one-man advantage the Kenston defense couldn’t keep up with the more experienced Tigers. Senior center Tyler Bookman overcame the power play by scoring two lamplighters in a span of just 15 seconds.

Tigers’ senior center Chase Lowry pushed Chagrin Falls out to a 4-0 lead with a goal at the 5:52 mark. Reed Dowling was credited with the apple. Bombers’ junior forward Carson Forte had the response as he scored to cut into the lead with 3:51 left to play in the second period. The Tigers needed just 11 seconds to get that goal back as Lowry scored his second lamplighter of the period off an assist from sophomore forward Matt Revnew. The Kenston offense was stuck in neutral as it recorded just nine shots on goal during the game.

“We limited their shots quite a bit. Five shots in the first period but we were able to wear them down,” coach Revak said, “We actually have a fairly young defensive crew. I only have one senior. They’ve really come along.

Chagrin Falls put an exclamation point on the game as Lowry and Bookman each picked up their third goals in the final period to give the Tigers two players with hat tricks in the game. It was the kind of contest that felt like a long time coming for Lowry as he had been putting in solid performances in the first few games but hadn’t scored yet. He put an end to that last Saturday.

“He’s always a strong forward. He’s a good two-way player. He plays the defensive end really well. I put him out there on penalty kills situations a lot. He’s just really strong physically and good with face-offs and thinks about defense a lot so it’s nice to get to put the puck in the net,” said coach Revak.

The Tigers carried the momentum from from their win over Kenston into last Sunday’s game against Canfield as they overcame a two-goal deficit in the first period for its second straight victory. Chagrin Falls will host Cuyahoga Valley Christian Academy on Friday at 8:05 p.m. and then welcome Notre Dame-Cathedral Latin to town on Saturday at 4 pm while the Bombers will face off against Aurora on Saturday at 8:05 p.m. then travel to face Solon at the Floyd E. Stefanski Ice Center at 7:30 on Sunday at Gates Mills.