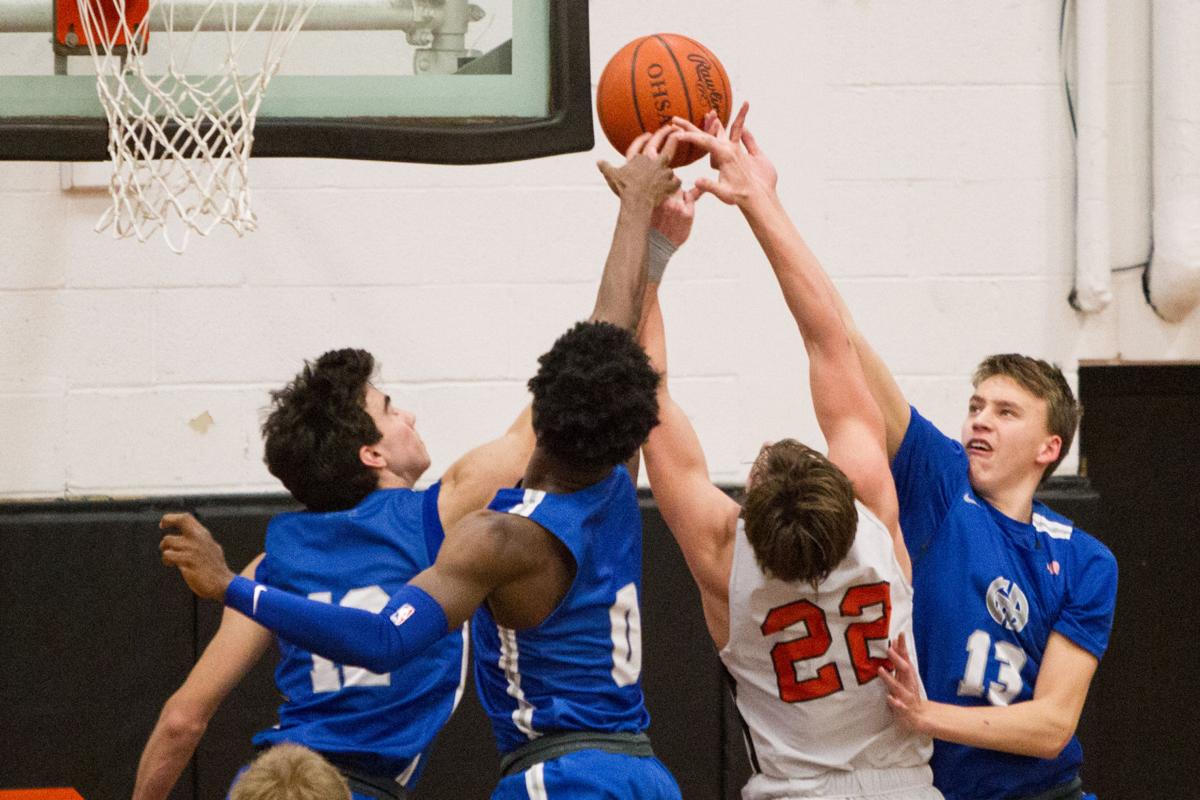 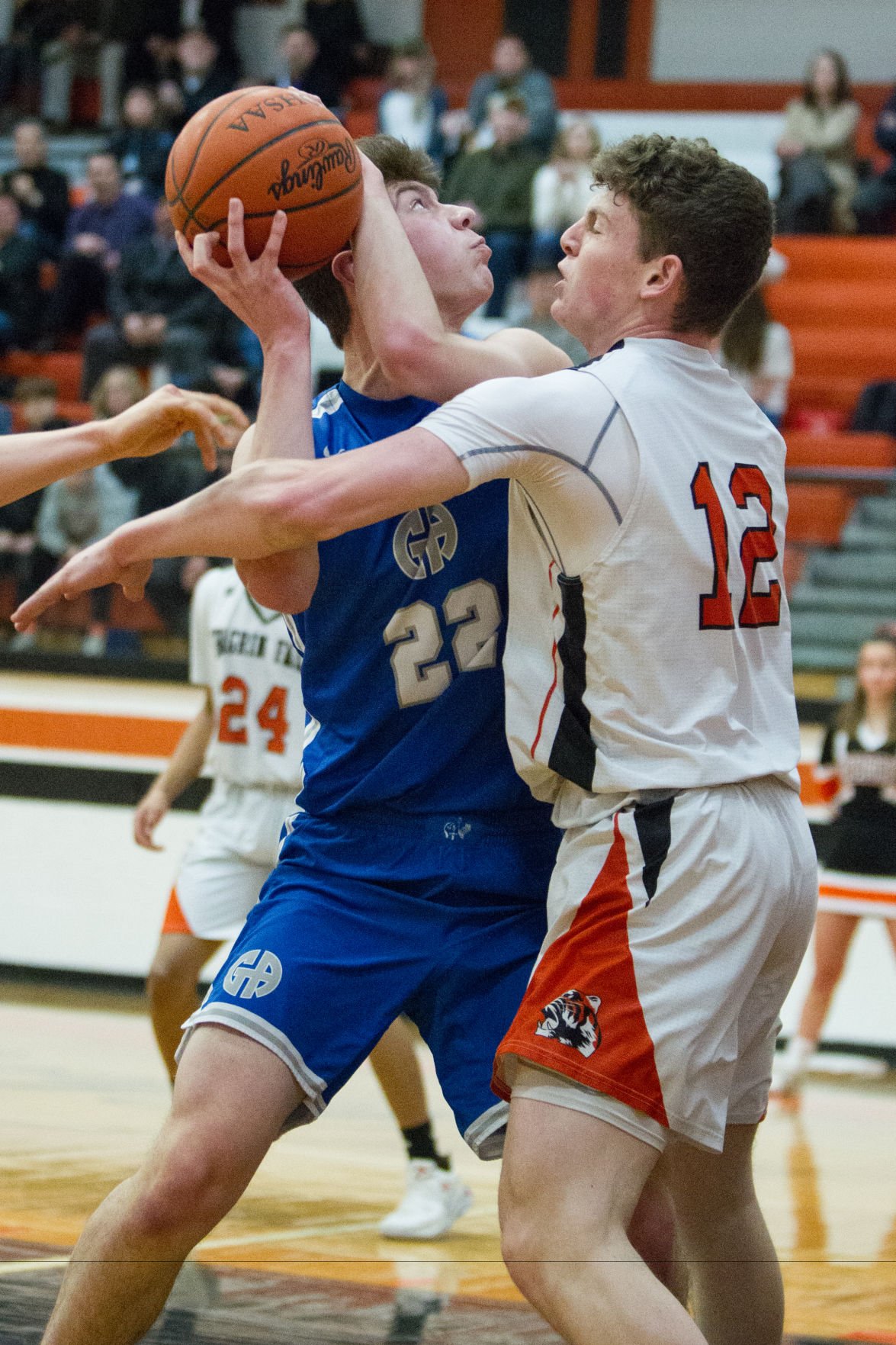 The seed selections were on Sunday, but the Gilmour Academy boys basketball team (12-7) didn’t bother kicking up its feet to just mosey around until tournament time.

No. The Lancer cagers proved that competing to win is in their DNA during a 69-49 runaway victory in the fourth quarter of a road battle against non-league foe Chagrin Falls (14-6) on Tuesday night at Quesinberry Gymnasium.

The Gilmour boys owned just a 47-43 lead entering the final period, before turning up the intensity on defense to outwit Chagrin Falls, 22-6, in crunch time for their third straight victory behind nine players in the scoring column.

“You can’t just flip a switch and think you’re going to do it when it’s tournament time or when you’re playing for a league title,” Gilmour second-year head coach Dan DeCrane said about the heart and hustle of his guys on Tuesday night.

“You’ve got to do it now,” he said. “And I thought our guys did a good job going out there and competing to win tonight.”

Chagrin Falls’ largest lead of the game was 13-8 in the first quarter, when Tiger 5-foot-8 senior guard Cam Owen broke to the bucket in transition for two of his team-high 19 points, not to mention four boards and two assists.

But Chagrin Falls, a team that thrives on sharing the ball and making the extra pass for uncontested layups, only had four players in the scoring column as the Tigers couldn’t find their usual passing lanes against the long, conscious defense of the Lancers.

“Well, our whole mentality is to deny one way, deny one way,” Gilmour 6-foot-2 junior guard Andre Rodgers said. “So, all week we were just prepping, and we knew that, as soon as we denied them one way, they were going to go backdoor. So, we just put a good emphasis on that in practice and just came out and executed it during the game.”

After Gilmour’s starting unit struggled to get going offensively, Lancer 5-foot-8 senior guard Max Snyder came off the bench and drilled a triple off an assist from 6-foot-2 freshman reserve Brandon Rose.

On the next possession, Gilmour 6-foot-4 sophomore Ryan Mueller hit another triple off the bench on an assist from 6-foot-3 junior reserve Vinny Bandwen to provide the Lancers a 6-0 run to close out the opening quarter with a 16-15 upper hand.

“We always look for bench support – scoring, defensively,” DeCrane said. “We finally got that there in that stretch. And guys kind of struggled a little bit off the bench in the second half, so we kind of shortened our rotation. But those guys keep our starters fresh. So, they just did a good job of making good decisions, guarding the basketball and denying one away.”

That bench spark at the end of the first quarter extended to a 19-4 run that was highlighted by a Mueller put-back, a Rodgers lane-weaving drive and then one of 6-foot-3 senior Connor O’Toole’s seven assists to 6-foot-5 junior Ben DeMell for Gilmour’s 29-19 upper hand with two minutes left in the half.

O’Toole finished with a team-high 19 points and two boards to go with his seven assists, while DeMell tallied 17 points, 10 boards and three assists.

“The coaches stressed to me the whole week that size isn’t really one of their strengths and that I needed to be a monster on the boards,” DeMell said. “And I just did my best. When I did get boards, I just tried to find open teammates for open shots.”

Chagrin trimmed its deficit, 32-28, by intermission, thanks to 5-foot-11 junior Xavier Perez scoring seven of his 13 points in the period, including three makes from the stripe, as well as a pair of assists to Owen and to 6-foot-2 junior Josh Norton.

The third quarter was back-and-forth with Gilmour stretching its lead to 39-32 and then Chagrin closing its deficit, 44-43 off a 3-pointer from 6-foot junior Tate Yonker with 1:40 to go in the period.

But every time Chagrin made a run, the Lancers had an answer. At the end of the third quarter, the answer was a 3-pointer by Rose off an assist from Rodgers to push Gilmour’s lead to 47-43.

Rose, who scored all eight of his points during a 2 1/2-minute stretch, helped the Lancers get going to open the fourth quarter, sinking a reverse layup and then finishing off an and-one feed from DeMell to put the Lancers up, 54-43.

“That and-one was a huge, athletic play,” DeCrane said. “He ran the floor well. He kind of struggled there in the second quarter, and I thought he did a good job responding to our challenge of, ‘Hey, we’re going back to you. We just need you to mentally reset before you go back out there.’”

The Lancers continued to pour it on at the offensive end with 6-5 DeMell using his size for nine points down the stretch, while 6-3 O’Toole strayed away from his deep triggers to use his size for three buckets on the post in the fourth.

Defensively, Gilmour forced eight turnovers in the final eight minutes and held the Tigers to two-of-15 shooting from the field.

“I liked our defensive effort more,” said Rodgers, who finished with six points, two boards, three assists, two steals and a block. “They only scored like six points in the fourth quarter. So, it was like we said; denying one away.”

Gilmour has three games left in the regular season, starting with a road battle against University School at 7 p.m. Friday. Chagrin Falls will finish its regular season with two home games against Notre Dame-Cathedral Latin on Feb. 18 and University on Feb. 21.

In the 13-team Division II Stow District, Gilmour Academy got the No. 4 seed, while Chagrin Falls picked up the No. 6 seed.

Coach DeCrane said his guys’ fourth-quarter effort against Chagrin Falls on Tuesday exemplified what he expects of them in order to make a playoff run.

“We finally just exerted our will on them,” he said. “It started with our defensive pressure and with guys playing through fatigue. We talk about playing uncomfortable and liking that. When you’re tired, you’re not tired. You’ve got to keep going. You’ve got to keep staying in stance, active hands, active feet, and I thought our guys did that, certainly in the fourth quarter.”