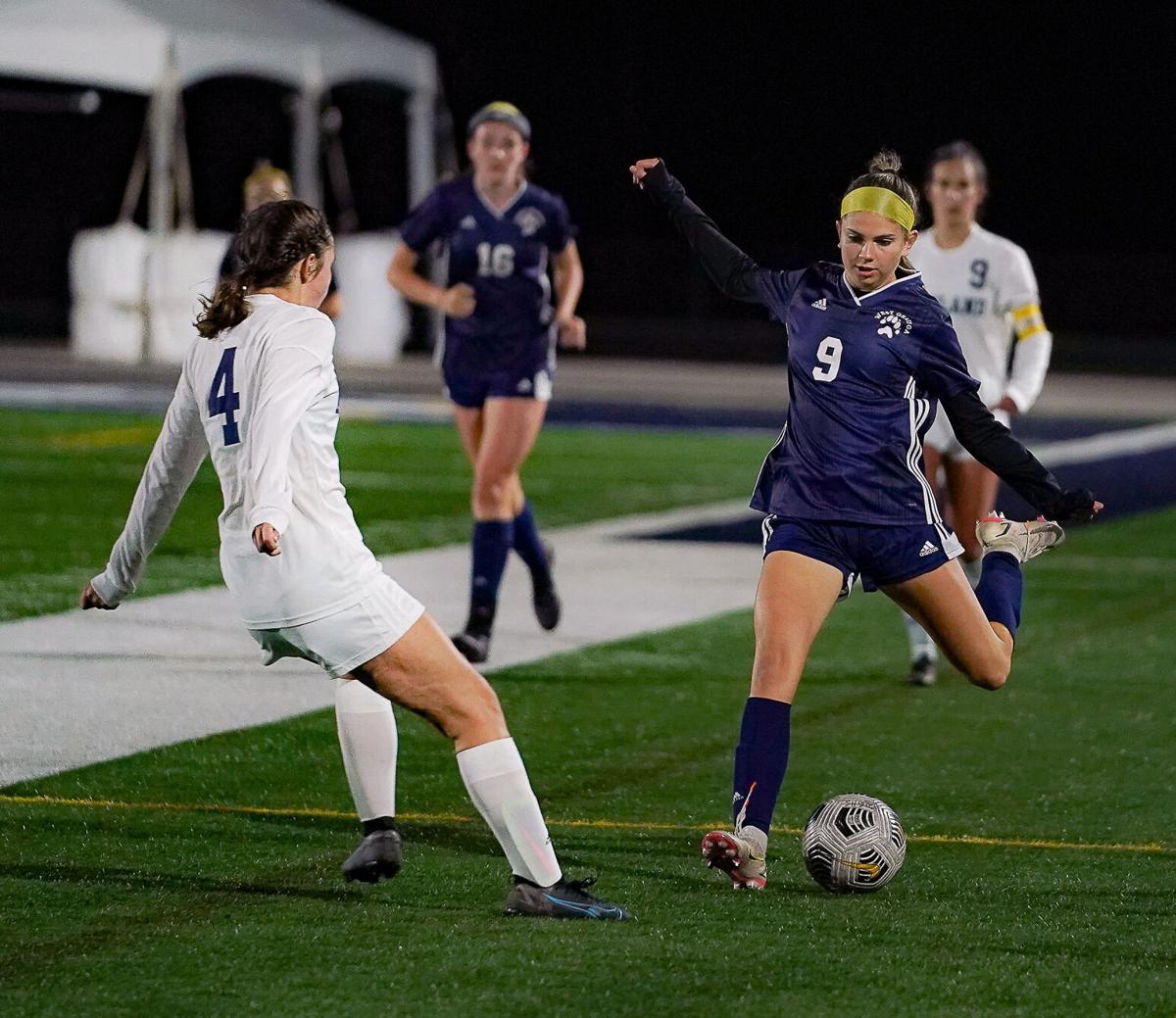 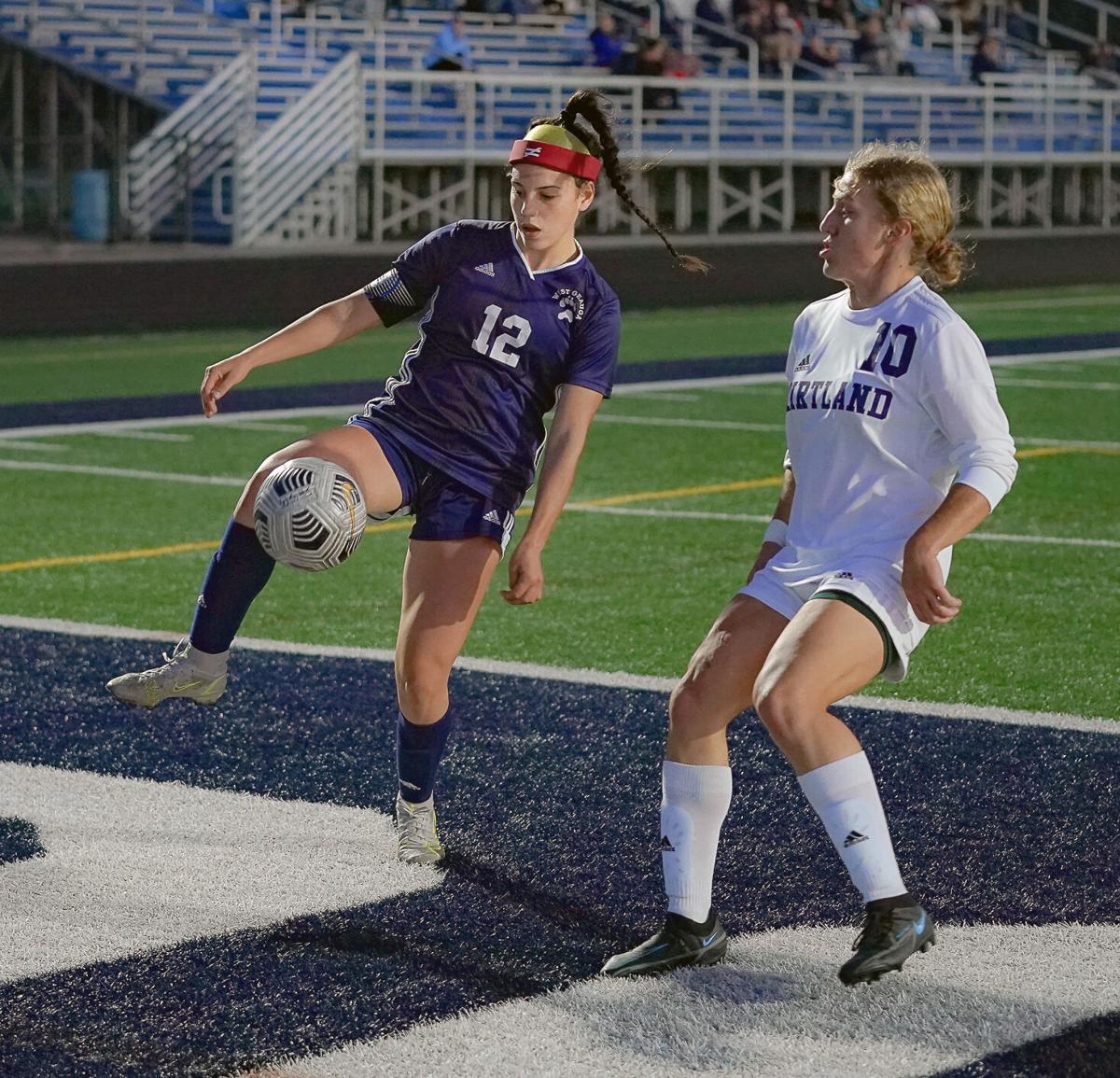 Wolverines’ junior Frankee Flesher (12) corrals the ball to keep it from the clutches of Kirtland junior Macy Mcintosh (10) during West Geauga’s win over the reigning Division III state champions on Sep. 30 in Chester. 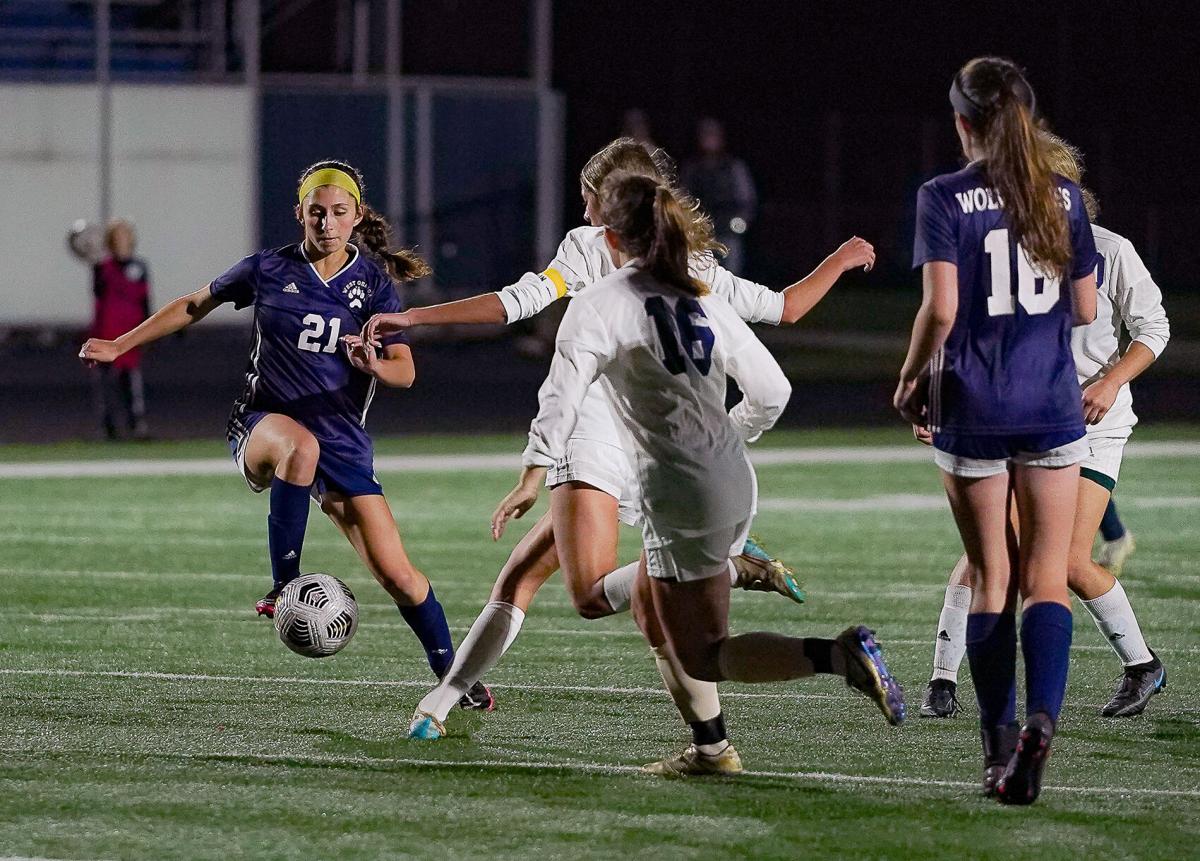 West Geauga senior Julia Martinez (21) tries to make a move with the ball against the Hornets’ defense. The Wolverines are hoping that their 3-2 victory over CVC rival Kirtland will spark the second half of their season.

Wolverines’ junior Frankee Flesher (12) corrals the ball to keep it from the clutches of Kirtland junior Macy Mcintosh (10) during West Geauga’s win over the reigning Division III state champions on Sep. 30 in Chester.

West Geauga senior Julia Martinez (21) tries to make a move with the ball against the Hornets’ defense. The Wolverines are hoping that their 3-2 victory over CVC rival Kirtland will spark the second half of their season.

The West Geauga Wolverines girls soccer team is back in business.

After being stuck in neutral for a while, the Wolverines may finally be ready for takeoff after defeatting Chagrin Valley Conference rival Kirtland in a 3-2 win last Thursday night at Howell Field.

After recording a school record of six ties, it has been difficult for the Wolverines to pick up steam.

“We’ve had so many ties there haven’t been those emotions or those feeling of good wins and bad losses too much,” said West Geauga coach Kori Jesenovec. “This win obviously is huge. Getting a win against a team like Kirtland is always one for the books that you look to be a positive.”

Kirtland may be the defending Division III state champions, but the Wolverines know how to handle their conference rival as last Thursday’s win marked the third straight victory over the Hornets since the 2019 season.

Jesenovec said she knew that West Geauga (4-3-6, 1-0-2) would have its hands full with the reigning Division III state champions as the Hornets boasted one of the most formidable offenses in the conference.

Leading Kirtland was standout senior forward Erika Zschuppe. Jesenovec admitted that she considered marking one of the top scorers in the State of Ohio but opted not to.

“I had an internal debate as a coach to either put a mark on Erika Zschuppe or not,” said the six-year Wolverines’ coach. “Ultimately I came to the decision to not to because our philosophy at West G is to play our game and when you play a team and you pull a resource off your team to do an individual man mark you’re automatically playing to the other team’s strengths in trying to weaken them and not playing to your strengths.”

The Wolverines got off to a fast start as junior Frankie Flesher put them up 1-0 inside the second minute.

“The play was like a fumble around the box,” explained Jesenvoec. “The goalkeeper fumbled the ball around and we had a shot that fumbled out and Frankie came in, cleaned it up and put the ball in the back of the net.”

That was one of the only shots the Wolverines had on net during the first half. West Geauga spent most of time playing from its defensive half of the field as it had its hands full trying to slow down the Hornets’ potent offense.

Kirtland finally broke through to tie the score at 1-1 when Zschuppe came up with the equalizer in the first half.

“She found a really great gap within our defense,” noted Jesenovec. “One of our center defenders stepped up to mark or to read a ball and it split through her. Erika got a great touch beyond our defense and put the ball in the back of the net.”

After spending most of the first half playing on their heels, the Wolverines were a different team in the second half.

“Gaining possession in the middle third of the field was huge for us,” said Jesenovec. “I think one of the things we saw in the first half is that we were getting torn up in the middle of the field and that was difficult for us to handle. In the second half we really stepped up our midfield presence and increased the number of midfielders that we had and were able to manage that a little better and try to squash the build-up play from Kirtland.”

The Wolverines’ adjustments paid off when junior Megan McGinnis scored the go-ahead goal to put them up 2-1 inside the 68th minute off an assist from Flesher.

“Frankee took the ball down from the right wing and played a beautiful cross across the net,” recalled Jesenovec. “The ball fumbled around a little bit in the box and Megan was able to put her foot through the back of it.”

Flesher’s assist on McGinnis’ goal was the fifth of the season, matching her career best she set during the 2019 season. Flesher is still drawing a lot of defensive attention and has learned to adjust by becoming a better passer.

“Frankie’s development has really grown into the all-around inclusive leader,” said Jesenovec. “Assists come with the title. By having as many assists as she’s had, she’s really come to understand and realize that it’s impossible to get proper results as the lone ranger on the field. I think that she’s seen that.”

McGinnis’ big night continued as she gave West Geauga some insurance after heading in a corner kick off the foot of senior Rae Ehrbar inside the 70th minute.

Zschuppe trimmed the Wolverines’ lead to 3-2 on a goal inside the closing minute but it was too little too late.