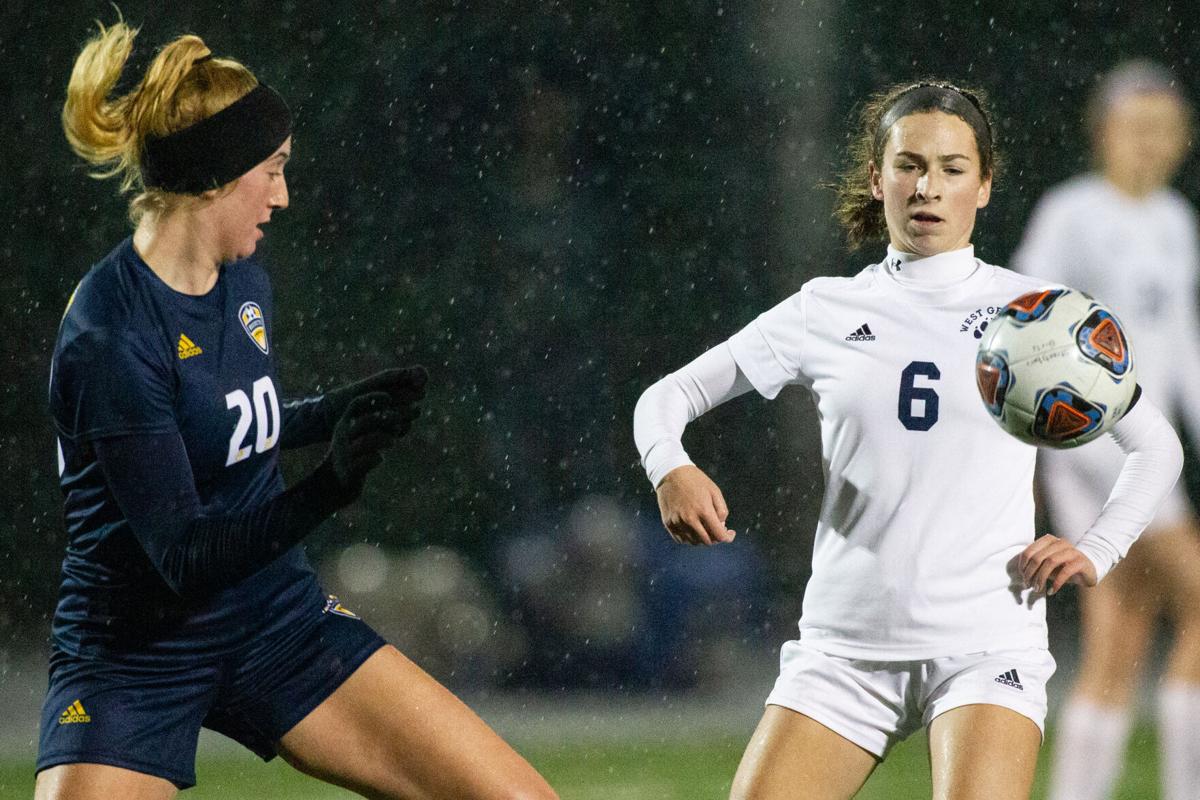 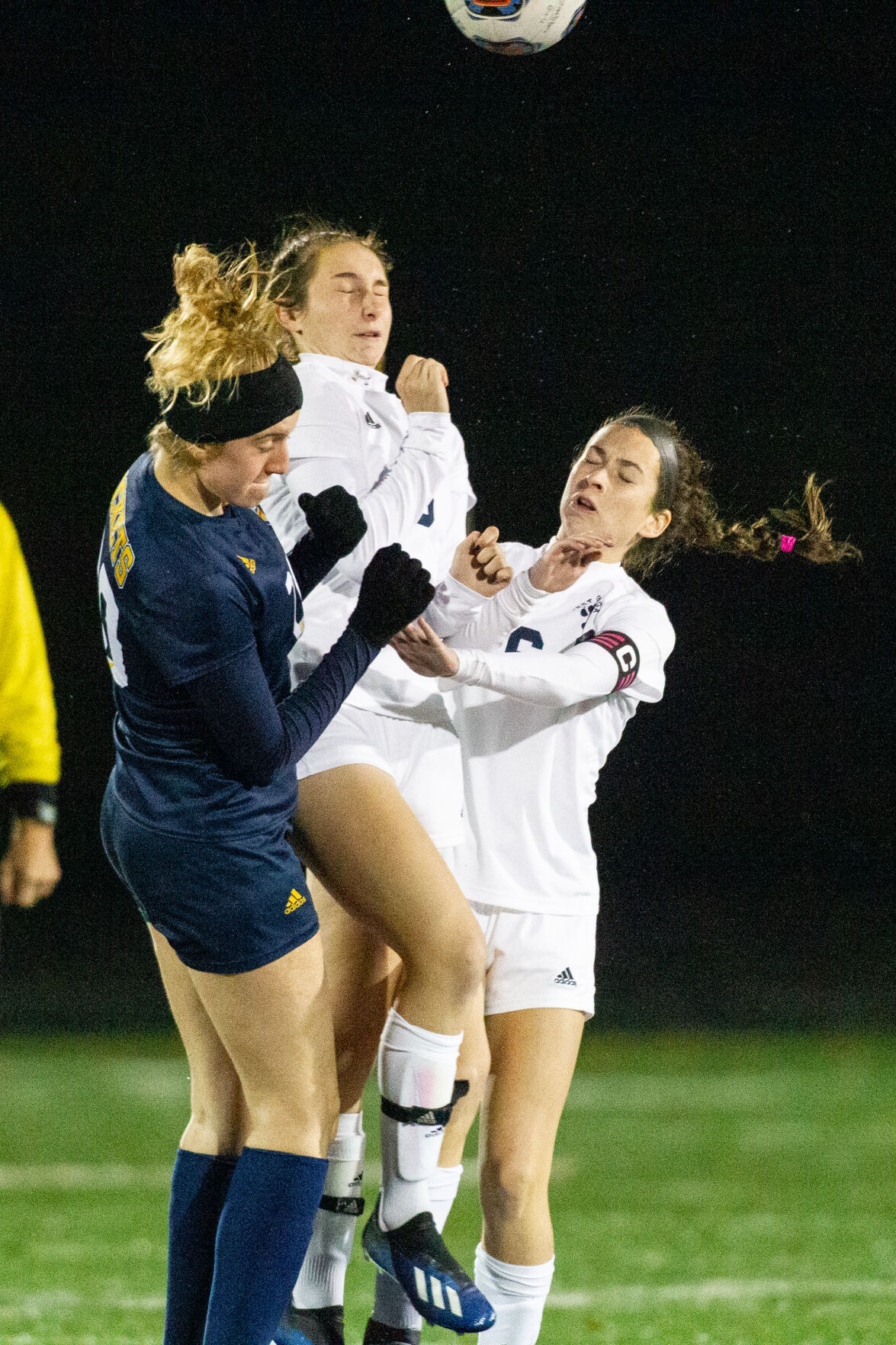 In the years to come, there will be less talk about the 2010 West Geauga girls soccer team, and that’s not such a bad thing.

When comparing future teams to past, the chatter will now be focused on the 2020 Lady Wolverines (15-3) and how they monopolized the pitch against state No. 6-ranked Streetsboro (14-2-3) in a Division II district-title affair last Thursday at the Lady Rockets’ house.

Behind a hat-trick performance from senior forward Nicola Ehrbar, No. 2-seed West Geauga laid down the law from beginning to end for a 5-0 victory, claiming its first district title since fourth-year head coach Kori (Chapic) Jesenovec was a senior all-Ohioan on the 2010 team.

Also with a pair of assists, Ehrbar had a say in all five tallies against Streetsboro, upping her season total to 26 goals and a dozen helpers through 18 matches this campaign.

“It’s great to hear about Kori’s days as a player,” Ehrbar said. “I know we all love hearing about them, and they were spectacular. But now it’s our time, and she’s our coach, and she’s leading us but in a different way. So, we’re here to make our own mark and our own statement in West Geauga girls soccer history.”

While Streetsboro entered last week’s match with just one loss against a talented Division I Nordonia side (14-4) and while the Lady Rockets entered with a higher seed and a higher state ranking, they did not play the schedule that the West Geauga girls played.

Of those seven opponents, six of them won their district titles games.

“To that point, I told the girls that we didn’t play an easy schedule this year,” coach Jesenovec said. “All the people that we played had a lot of merit to their name and brought a lot of good competition. Really, I think that is what set the standard and set the tone for what this tournament was going to look like.”

The Streetsboro girls could not say the same – playing only two district-final teams in the regular season – and it showed on the pitch during last week’s match against West Geauga.

In the 10th minute, West G sophomore midfielder Holly Jeunnette switched the field across the top of the box to find Ehrbar one-on-one with a defender on the far side, which usually spells trouble for most any opponent.

Ehrbar spun off the Lady Rocket defender, took one touch in space toward the outside of the box and ripped a lefty strike from 15 yards out that was too hot for diving Streetsboro senior keeper Allison Laudato.

Less than three minutes later, Ehrbar played a give-and-go pass to younger sister Rae Ehrbar, a junior attacking midfielder, who played it back from 25 yards out, before the elder Ehrbar finished off another lefty from 12 yards out – again past a diving Laudato to far post – for a 2-0 upper hand.

“I think that might have been one of my favorite goals all season, if I’m being completely honest,” Ehrbar said. “Just the fact that it was with my sister, we’ve been working on give-and-go’s all season now, trying to get those so that we see them and we use them while we’re in the game. It was just perfect. She did a great job of seeing me and playing it. It’s what we’ve worked on for years now. So, it was awesome to get that.”

That was the younger Ehrbar’s team-high 16th assist this season, matching her total from a year ago.

Going up, 2-0, allowed the Lady Wolverines to play a patient and possessive game without having to press to try and score, which, in turn, actually led to more opportunities against a Streetsboro side that didn’t have the same luxury.

In the 24th minute, the elder Ehrbar worked the ball over in space to senior holding midfielder Bailey Zanella, who then unleashed a rocket from 35 yards out that found the top shelf with goalie Laudata unable to get a jumping hand on it for the Lady Wolverines’ 3-0 upper hand. That was Zanella’s seventh tally this season.

“You never really want to tell your team to take shots from 35 or 40 yards out and say that’s when we’re going to score,” Jesenovec said. “You theoretically want to be able to build up and put them in the back of the net with some sort of rhyme or reason.

“But a lot of times you do get goals like that by catching other teams off guard and by having a foot like Bailey has on her to be able to hit that type of a ball.”

While West Geauga doesn’t practice making 35-yard goals, the Lady Wolverines do have the ability to score those, and so Jesenovec said she doesn’t discourage it, because she would never want to put the brakes on a player as talented as Zanella.

Less than 3 1/2 minutes into the second half, West G struck again when sophomore forward Frankee Flesher put away a rebound tally off the elder Ehrbar’s original shot for a 4-0 lead. That was Flesher’s 23rd goal of 2020.

“Ultimately, the game of soccer is impromptu,” Jesenovec said of Flesher being in the right place at the right time. “So, it’s not like you set up different plays and set up different runs like you do in basketball. You kind of play with what is given to you.

“And Frankee has a really great mentality and intuition of just her hard work and her effort, and it puts her in good situations a lot of the time. It takes a lot of fitness, a lot of endurance and a lot of mental stamina.”

The elder Ehrbar put the finishing touches on the 5-0 victory in the 65th minute, when she collected a throw-in from junior defender Shannon Swinerton and, this time, used her primary right foot to bank home a 20-yard shot off the far post to put an exclamation point on the district championship.

Also on defense, senior Aubrey Zanella and sophomores Megan McGinnis and Zoe Cowles helped sophomore keeper Ashlyn Drayer, who made four saves in the match, record her 10th clean sheet of the season.

“This meant a lot, especially after coming from last year and losing that game to NDCL,” the elder Ehrbar said of a 2-1 upset against Notre Dame-Cathedral Latin.

“It meant a lot to be able to get back to this place where we’re competing again in that district final,” she said. “And against a team that has an outstanding record and had been playing well all season, to come out and win the game was awesome for us.”

On Tuesday night, the Lady Wolverines’ playoff run came to a halt against state No. 3-ranked Rocky River (18-0-2) in a 4-1 defeat.

The West Geauga girls’ lone tally came on an unassisted strike by the elder Ehrbar, while Drayer finished with six saves in goal.