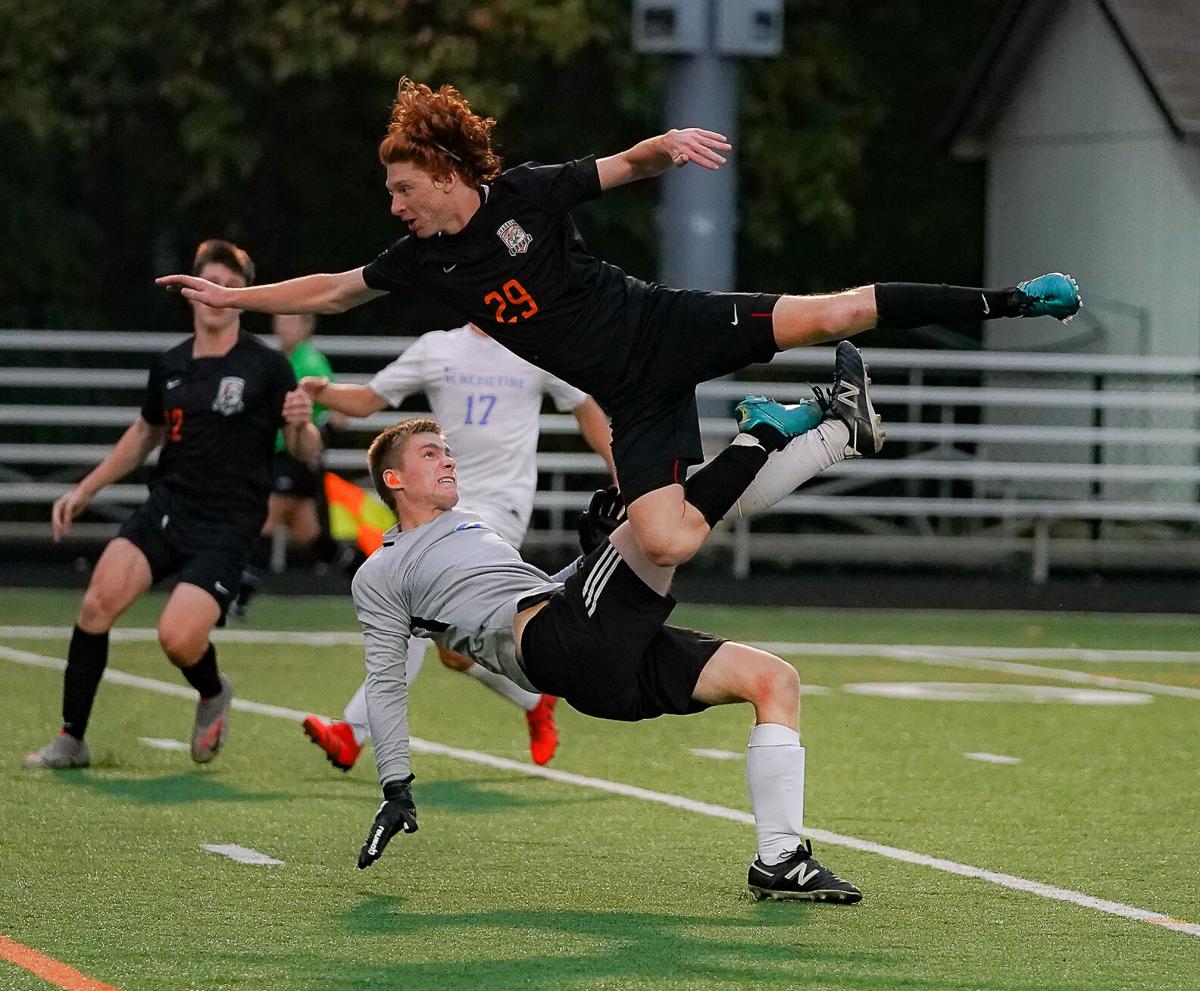 Chagrin Falls’ senior midfielder Alex Cantor (29) collides with senior Bengals’ goalkeeper Peter Sterkel. Cantor’s night came to an early end as he was awarded his second yellow card after crashing into Sterkel. The Tigers, however, pulled through with the 2-1 victory on Oct. 15 to close out the regular season. 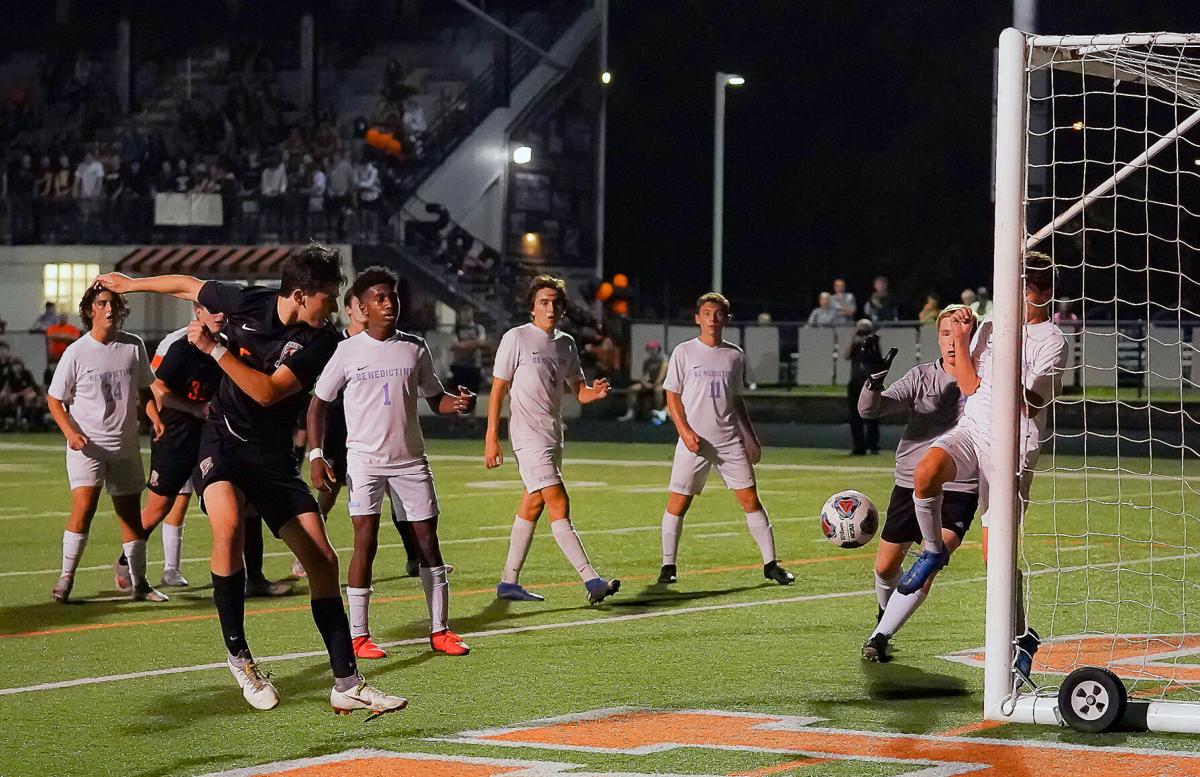 Chagrin Falls’ senior midfielder Brett Vaccarro wraps one inside the right post for the game-winning goal in the Tigers’ 2-1 win over Benedictine last Thursday night at C.S. Harris Stadium.

Chagrin Falls’ senior midfielder Alex Cantor (29) collides with senior Bengals’ goalkeeper Peter Sterkel. Cantor’s night came to an early end as he was awarded his second yellow card after crashing into Sterkel. The Tigers, however, pulled through with the 2-1 victory on Oct. 15 to close out the regular season.

Chagrin Falls’ senior midfielder Brett Vaccarro wraps one inside the right post for the game-winning goal in the Tigers’ 2-1 win over Benedictine last Thursday night at C.S. Harris Stadium.

Let the fun and games begin.

After a rocky start to the season, the Chagrin Falls Tigers boys soccer team has hit their stride. The Tigers closed out the regular season on a high note with a 2-1 victory over Benedictine to celebrate senior night last Thursday evening at C.S. Harris Stadium.

Chagrin Falls (7-8-1) has developed a heated rivalry with the Bengals since they started playing each other in 2019. The Tigers have won all three contests.

“With the addition of its coach, Benedictine really brought its program to another level,” said Tigers’ coach Brian McKenna. “We certainly saw that as an opportunity to play one of the stronger teams on the east side.”

Both teams got off to a slow start but Chagrin Falls took a 1-0 lead inside the 30th minute off a corner kick. After junior midfielder Kenny Clark booted the ball, it bounced around in the box until junior defender/midfielder Carter Kler found the back of the net.

McKenna said that one of the Tigers’ biggest challenges this season had been scoring off of set plays so he was satisfied to see them convert the corner kick for the goal.

The Tigers’ offense struggled at the beginning of the season because only four starters returned from last year. Things did not get easier when they suffered a handful of injuries in the first few matches and the offense was completely out of sync.

The Tigers found the spark they needed after they defeated crosstown rival Kenston 3-2 in a home victory on Sep. 23.

“That was a huge win,” said senior midfielder Brett Vaccaro. “It was a really close game. We ended up scoring in the last few minutes.”

Since then, everything has been trending in Chagrin Falls’ favor

“I think a lot of us had been dribbling too much,” said Vaccaro. “We started to pass more and see the openings.”

The match had the makings of a true rivalry game with a lot of physical play in the first half. Senior midfielder Alex Cantor, one of Chagrin Falls’ best players, received his second yellow card near the end of the first half leading to an ejection.

“Alex is one of the engines in the middle,” said the four-year coach. “He plays with so much passion. That second yellow card was tough. We had to adjust but come the second half, we decided we were not going to pack it in and try and maintain the 1-0 margin.”

The Bengals scored the equalizer at the beginning of the second half. After junior goalkeeper Andrew Sutliff made a diving stop on a shot attempt, the ball slipped out of his reach and ricocheted toward senior center back Will Kehres who easily slotted it in the unmanned net inside the 48th minute.

Benedictine had all the momentum in its favor until the Tigers struck again on a corner kick. Senior midfielder Brett Vaccaro received the ball off the foot of sophomore defender Jason Edwards near the right post and wrapped it inside the pipe to push Chagrin Falls back out to a 2-1 advantage inside the 59th minute.

“That was huge,” said Edwards. “It was more memorable for me because it was my first game back and getting that assist feels good.”

Edwards, one of the Tigers’ key players, fractured his hip during a contest against Chagrin Valley Conference rival Hawken. It was deemed a season-ending injury but he defied the odds and is back on the field just in time for the stretch run.

“Jason helps us with creating offense,” said McKenna. “He was able to help track some of the movement on his side of the field.”

Chagrin Falls held him in check during the match. Cora had a few looks at the net but they were not clear shots and the Tigers’ defense stifled Benedictine’s offense down the stretch.

“It was not surprising to see them maintain the pressure and not back off,” explained McKenna. “Even though we gave up a goal, they stayed positive which was a testament to their attitude on the field and hopefully we can see that more in the upcoming weeks.”

If Chagrin Falls defeats Jefferson Area on Oct. 29 in the Division II Akron 2 Sectional semifinal, then they will either host Southeast or travel to Aurora for the sectional final on Oct. 23 at 4 p.m.