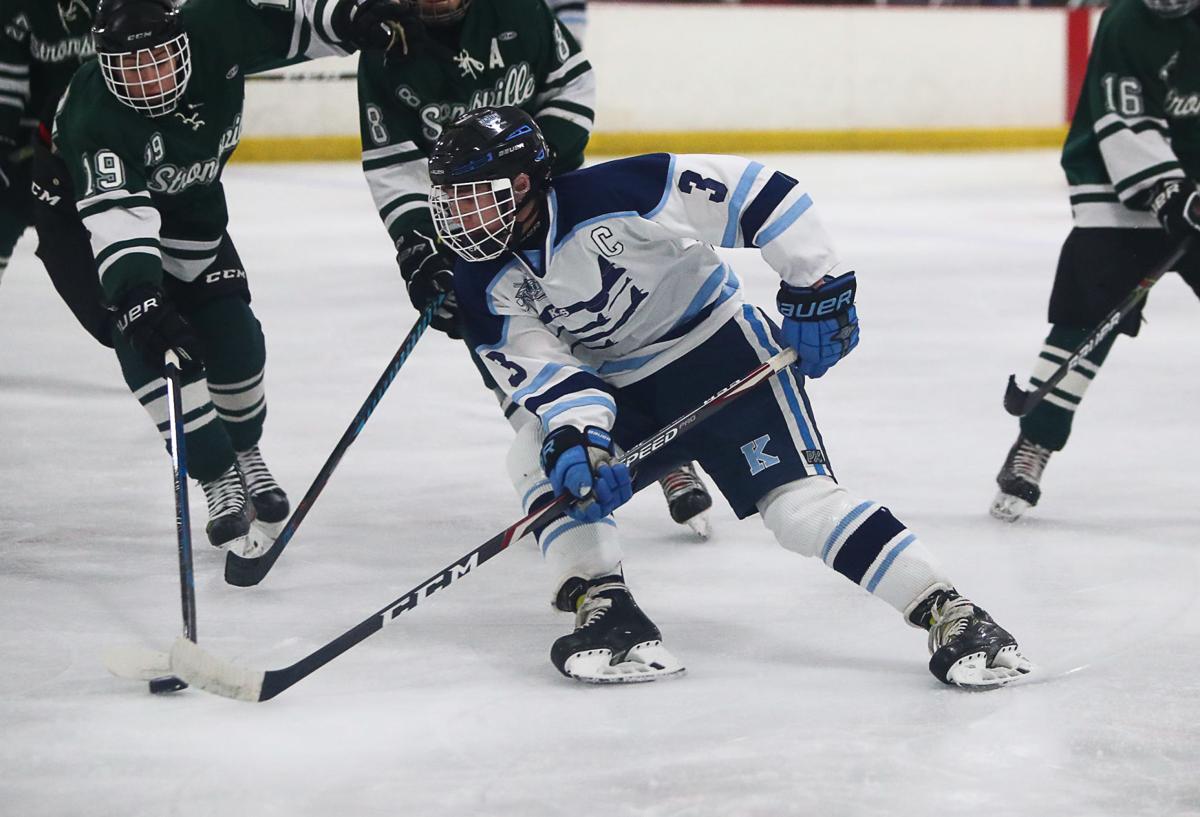 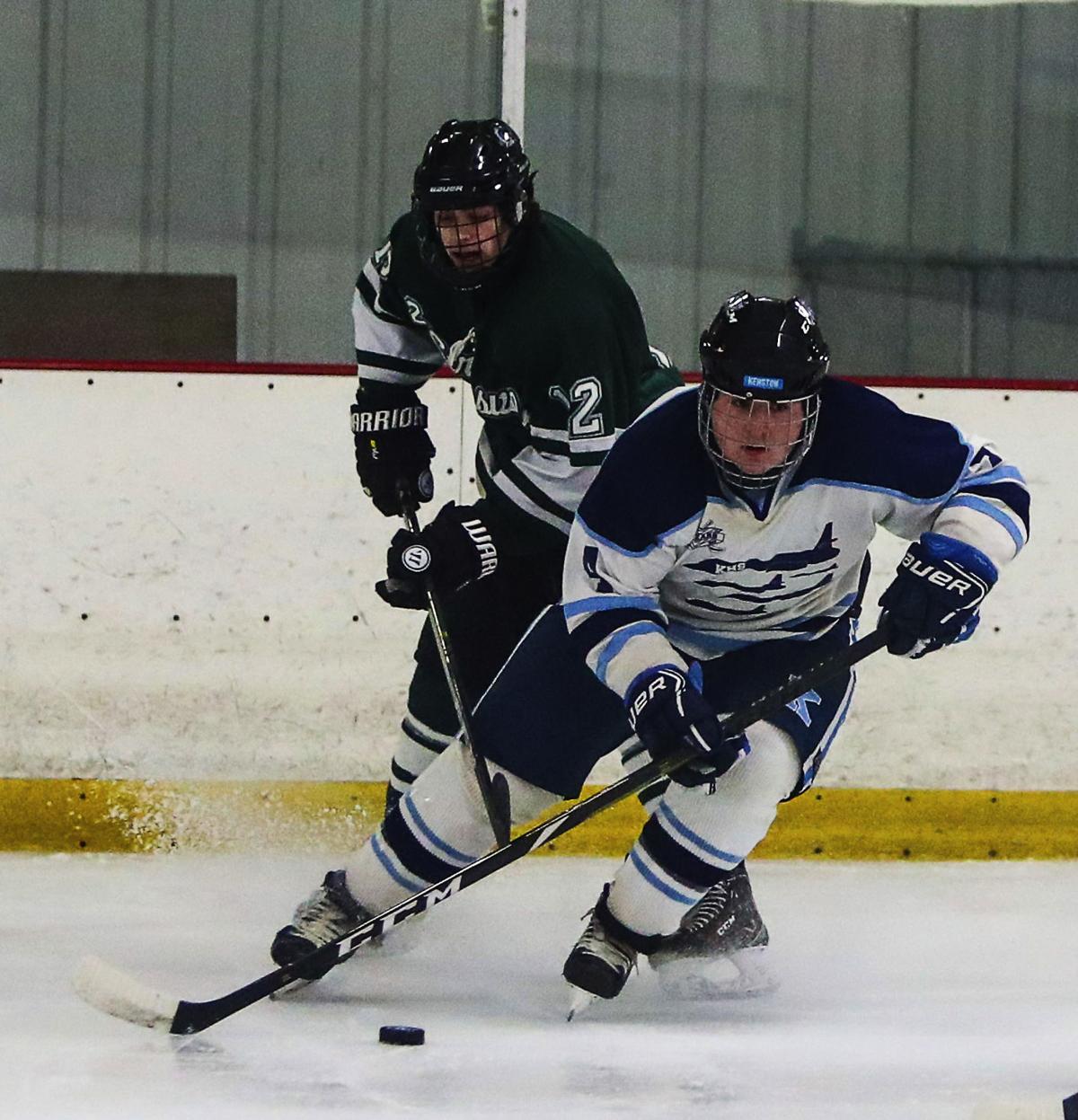 Kenston senior forward Remy Maurer turns on a dime to create space against Strongsville senior Devyn Martineau during the Ice Bombers’ home loss, 4-2, in league play on Saturday at The Pond. 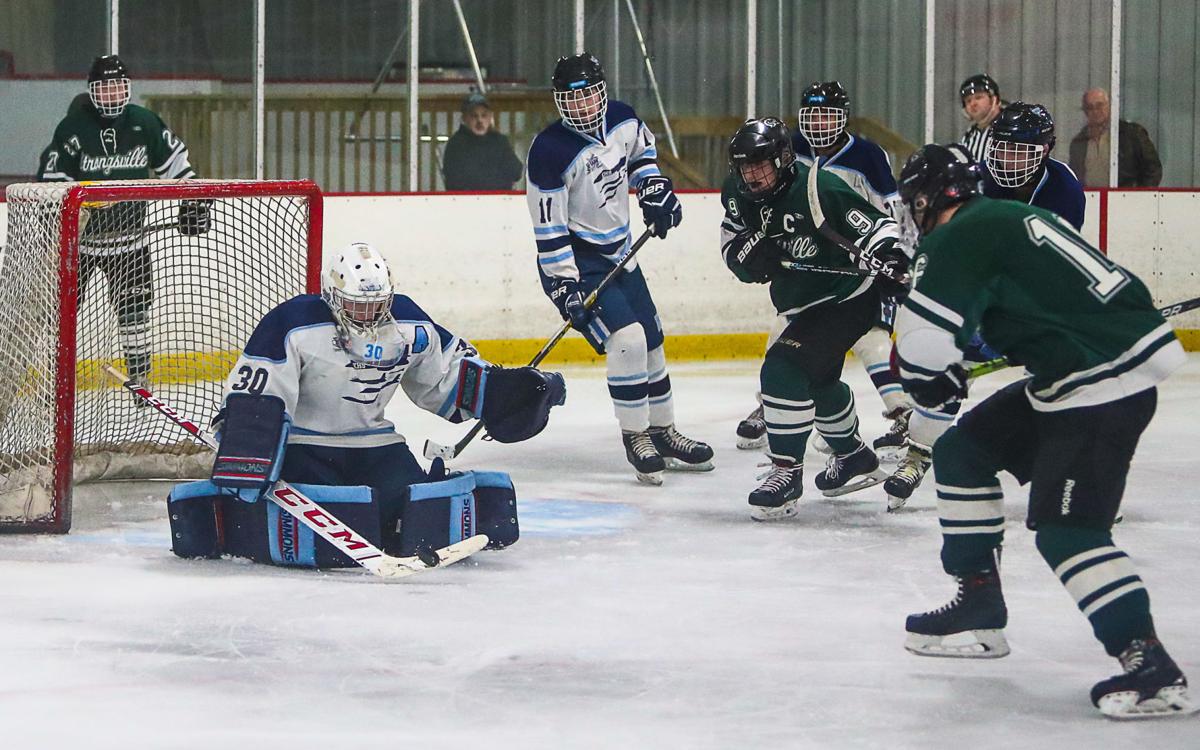 Kenston senior goalie Jason Hildebran comes up with one of his 46 saves against Strongsville on Saturday at The Pond. Upping his 2019-20 save total to 1,157, he became Ohio’s all-time single-season leader.

Kenston senior forward Remy Maurer turns on a dime to create space against Strongsville senior Devyn Martineau during the Ice Bombers’ home loss, 4-2, in league play on Saturday at The Pond.

Kenston senior goalie Jason Hildebran comes up with one of his 46 saves against Strongsville on Saturday at The Pond. Upping his 2019-20 save total to 1,157, he became Ohio’s all-time single-season leader.

For the number of shots Kenston faced, a one-goal lead in the third period wasn’t enough for the Ice Bombers during a league battle against Strongsville on Saturday evening at The Pond in Auburn Township.

The Kenston puck-handlers owned a 2-1 advantage behind goals from freshman forward Chase Parker and senior defenseman Val Carriero, while Bomber senior netminder Jason Hildebran was busy stopping 94 percent of the shots he faced.

And with junior defenseman Paxton Phillips playing next to Carriero, the Bombers have one of the best defensive duos in the Greater Cleveland High School Hockey League. But against the other premier teams in the top Red Division of the league, Kenston’s short bench has little resistance against surrendering massive amounts of shots on cage.

Putting 49 pucks on target for the game, Strongsville (17-2-1) lit the lamp twice against Hildebran in the third period to take a 3-2 lead, and then the Ice Mustangs buried an empty-netter in the final moments to hand Kenston (10-18) a 4-2 defeat.

“It was similar to the last time we played them,” Kenston third-year head coach Tom Fritsche said about a 4-3 road loss against Strongsville on Jan. 4.

“We had a lead and were able to stay with them, and then we fell apart,” he said. “We made some plays, but then we turned the puck over, and they were able to score a few goals in the third period. It’s just the depth that they have compared to us. That’s the difference.”

Carriero, a natural goal scorer, moved back to play defense with Phillips midway through the season. Neither of them comes off the ice for the entirety of most games.

When Fritsche made the decision to move Carriero to defense, it left senior Tim Matty to take care of the scoring load, but freshman Chase Parker and sophomore Cooper Akers made the transition to offense so that the Bombers can run 2 1/2 lines up top.

“Val and Paxton don’t come off the ice, except for maybe once in a blue moon,” Fritsche said. “That’s helped us a little bit, because Val can control the play, and Paxton is good enough where they can create plays together.

“I just think, Val, in my opinion, is the best player in the state, so that helps to have him on your team. And him playing defense allows him to stay on the ice and just rest. But then the other guys up front, I think when we win games, it’s because they’re playing hard and really battling.”

Carriero still uses his speed to make breaks to cage, and he takes faceoffs and plays some forward on power plays. The discipline aspect of Kenston’s game suited the Bombers well, as they drew just two penalties to Strongsville’s seven during Saturday’s battle.

At full energy, there’s nobody on Kenston’s regular-season schedule who can stop Carriero, Fritsche said. That said, Kenston struck first when Phillips made a break-out pass to Carriero, who then did the skate work to feed an apple to Parker.

“Val (Carriero) does what he does; he skates with the puck,” Fritsche said. “And he made a nice pass to Chase (Parker). And Chase is a smart hockey player. He’s scored a few goals like that this year, where he was able to get into the spot and Val can find him, and he can get a quick release on his shot, and it just goes in.”

Strongsville senior forward Nate Rajecki then got busy on a hat-trick night for the Mustangs by lighting the lamp on a 1-1 equalizer before the first intermission.

Kenston reclaimed the lead, 2-1, when Carriero beat Strongsville senior goalie Nick Harris with an assist coming from Akers. The Bombers retained that lead at the second intermission.

“I think we really battled in the second period,” Fritsche said. “And, anytime the kids battle, I explained to them, that gives (Carriero) a chance to not have to waste energy doing that. Then he can sit there, find a puck, poke it and go. So, when they create loose pucks by battling, it helps Val get going.”

Between the pipes, meanwhile, Hildebran stood on his head for the better part of 2 1/2 periods. With his 46 stops on Saturday, the senior goalie broke the Ohio High School Athletic Association single-season record with 1,157 saves so far this campaign.

Hildebran, who took over starting duties late in his freshman season, was already in the top 10 of the OHSAA single-season record book with 975 saves last year. He has at least three more games to add to this year’s total.

“Most of the teams we’ve played this year have outshot us,” Fritsche said. “We just try to have Jason (Hildebran) do what he does. I mean, Jason is one of the best goalie’s in the league, if not the best. So, we try to keep the shots to the outside. That’s the main strategy.

“I think in the third period, we just got lazy with a few pucks, and they were able to capitalize on opportunities. But Jason has been unbelievable. If it wasn’t for him, that game would have been 8-2.”

In the third period, Strongsville’s Rajecki buried the 2-2 equalizer, on assists from senior defenseman Lance Trihas and junior forward Nathan Dubsky, with about seven minutes to play.

Carriero had an opportunity late for a 3-3 equalizer, but Strongsville’s Harris came up with one of his 23 saves.

“I thought (Carriero) scored there,” Fritsche said. “The kid reached behind his back, and it was a really good save. That was our best chance to tie it, and their goalie just came up with a really big save.”

Kenston pulled Hildebran from goal in an attempt for a six-on-five equalizer, but Strongsville’s Rajecki gained possession of the rubber and went the other way to score an empty-netter for the 4-2 final.

In their final two games of the regular season, the Ice Bombers will travel to take on Red Division foe Hudson (14-11-1) at 4:40 p.m. Friday at Kent State, before returning to The Pond to play Blue North Division champ Orange (17-8) at 8:50 p.m. Saturday in Auburn.