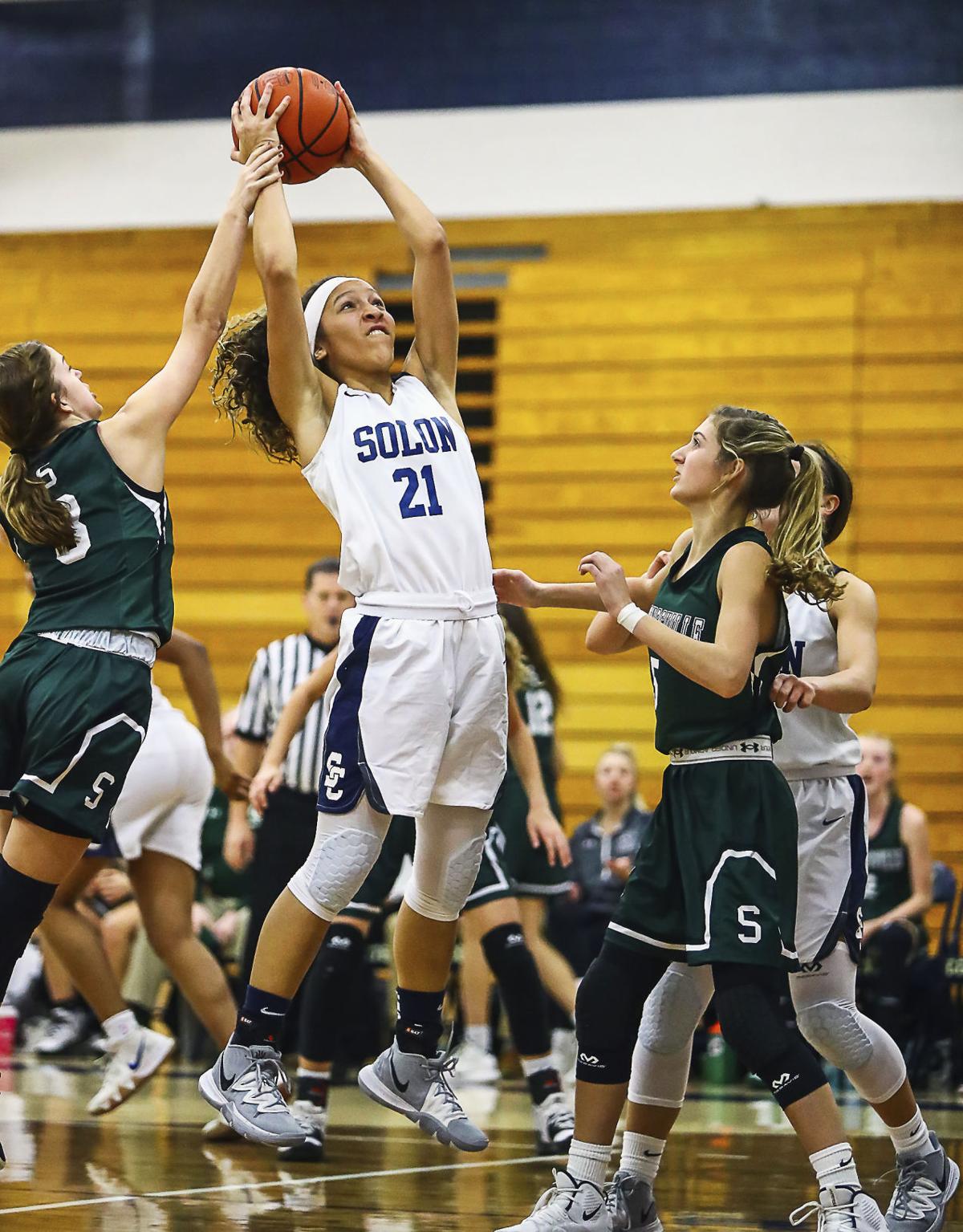 Solon freshman Raquel Thompson collects one of her three offensive boards at the apex of her vertical during the Lady Comets’ home victory, 59-47, against Greater Cleveland Conference foe Strongsville on Saturday afternoon. 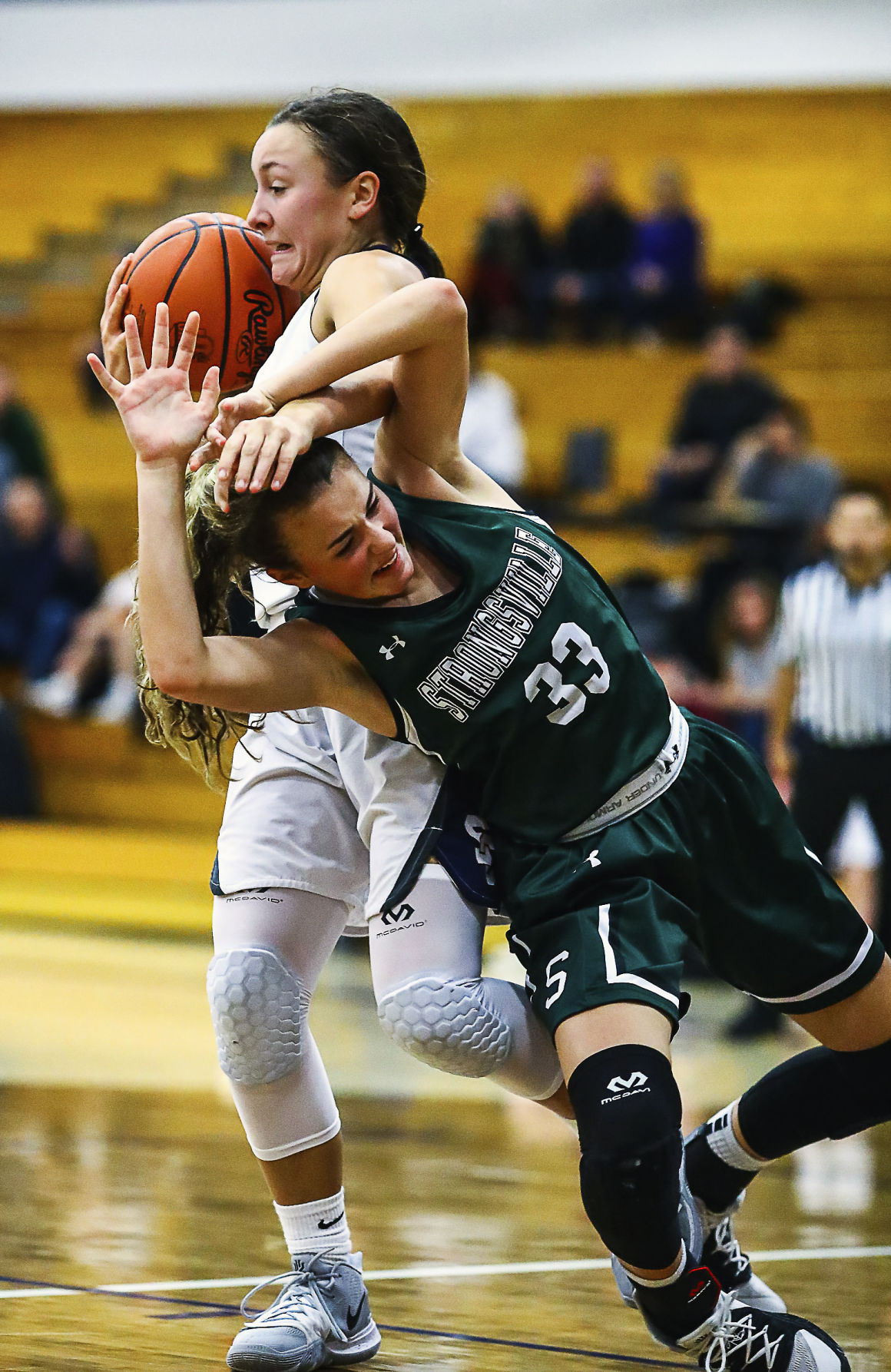 Solon freshman Raquel Thompson collects one of her three offensive boards at the apex of her vertical during the Lady Comets’ home victory, 59-47, against Greater Cleveland Conference foe Strongsville on Saturday afternoon.

Ball security took a front-row seat for the Solon girls, who were without freshman point guard Chyanne Hatcher-Turbeville during a Greater Cleveland Conference hoops collision with Strongsville on Saturday afternoon at their home gym.

The Lady Comets graduated four starters from last year’s 21-5 Division I district title campaign, all of whom were natural guards at the offensive end. So, the handles of Hatcher-Turbeville have been a key addition in Solon’s quest for a seventh straight league banner this season.

While 6-foot junior Hailey Weaver, Solon’s lone returning starter, has been the Lady Comets’ main scoring threat, after averaging 15.4 points per game as a sophomore, Hatcher-Turbeville is regularly posting double-digits in the scoring column and was her team’s most outstanding player in a 59-44 victory against Whitehall-Yearling (8-3) during the Tiger Roundball Classic Dec. 27 at Pickerington Central.

But Hatcher-Turbeville, who is also super-fast and aggressive on defense, was ill and out of commission on Saturday, when the Strongsville cagers (7-3) came to town riding a five-game win streak with a 4-2 mark in the GCC.

Fortunate for Solon 11th-year head coach Trish Kruse and the rest of her Lady Comets, another freshman, 5-foot-10 Morgan Blackford, was up to the task. Not only did Blackford come out firing on offense with 10 points in the first quarter, but she also helped limit Solon’s turnovers to just two cough-ups in the opening period.

“She did a great job,” Kruse said of Blackford. “This was her first time in the starting lineup as a point guard for us. Usually it’s Chyanne, but Chyanne is sick, so (Blackford) did a great job stepping up for us today.”

After a 40-20 upper hand at intermission, the Lady Comets did struggle to keep a handle on the ball at times in the second half, but, by then, it was too late for Strongsville. Solon came away with a 59-47 victory on its home floor.

“I thought our kids played really hard in the first half and did a great job of taking care of the basketball,” Kruse said. “Julia (Gersey) hit some big threes in the first half. I think (Blackford) did too. I thought we did a good job of moving the ball, getting out in transition and just getting defensive stops. In the second half, we didn’t do that quite as well.”

The Lady Comets improved to 6-5 with a 5-1 mark in the GCC, losing only a 67-59 road battle against Division I state No. 12-ranked Medina (10-1, 7-0) in league play on Dec. 7. Solon owned a double-digit lead in the third quarter of that game, with Weaver dropping 20 points and Hatcher-Turbeville scoring 18.

On Saturday, the Solon girls surged out to a 19-2 lead before the Strongsville girls knew what hit them. Solon senior guard Julia Gersey knocked down her first three attempts from downtown and Blackford connected on another 3-pointer for a 12-2 upper hand less than 2 1/2 minutes after tipoff.

“We just worked a lot this week in practice on kicking it out and hitting it, and I think we all had the confidence to do that,” Gersey said. “And our pressure was really important, because we feed off our defense. So, all that energy came right into our offense and we scored a lot early.”

Gersey, who would finish the game with 15 points on five treys, also had three rebounds in the first quarter, including one that she took off with in transition and assisted Blackford for an and-one finish and a 15-2 lead, before senior guard Nadia Gibson and Blackford scored back-to-back layups in transition for that 19-2 upper hand.

In the thick of the offensive fireworks without Hatcher-Turbeville, the question had to be: where was Hailey Weaver? Well, the third-year varsity veteran, who played starter’s minutes off the bench in the 2018 state championship game, wasn’t trying to intrude on the hot hands of her teammates.

Weaver finally got going on a game-high 19 points with a baseline drive to the bucket for her first two points for a 21-3 Solon lead with 2:20 left in the first quarter. In addition to 19 points, she would finish with nine boards, three assists and three steals on her game resume.

“I have no problem taking a step back,” Weaver said. “I know Morgan (Blackford) and Gersey are some of the better shooters on the team, so I definitely try to look for them for shots a lot. When they hit shots, then we’re scoring a lot, and that definitely helps the team a lot. And I like to see my teammates succeed.”

Strongsville’s offense finally got going with 5-foot-3 sophomore Ava Kadras coming off the bench to score a layup off a touchdown pass and then banking home a 3-pointer to cut the Lady Mustangs’ deficit, 23-8, at the quarter mark. Kadras finished with a team-high 10 points.

Solon’s Weaver then scored 11 of her 19 points in the second quarter to propel a 40-20 lead at intermission, as Strongsville was hanging on by a thread thanks to hitting eight-of-10 shots from the foul line in the period.

The Lady Comets had just five turnovers at the break.

Solon extended its lead to 25 points, 49-24, off a baseline drive by 5-foot-11 senior Maria Leskovec with two minutes to go in the third quarter, but then the lack of turnovers shifted to an abundance of turnovers for the Lady Comets – a dozen cough-ups in the second half.

“It was just mistakes on our end,” Gersey said of the turnovers. “We got a little too comfortable there, and you could see it.”

Without a junior varsity program this season, Solon has four freshmen getting regular varsity minutes, also including guard Kennedy Ford, who came up with two boards and an assist against Strongsville.

“I’d say our freshmen are really important,” Weaver said. “We’re not trying to pressure them a lot, but we obviously have a tough schedule and we’ve played some really tough teams. But I think they’re doing a good job of executing and learning the plays, and we’re just trying to get better every day. It’s baby steps, but we’re getting there.”